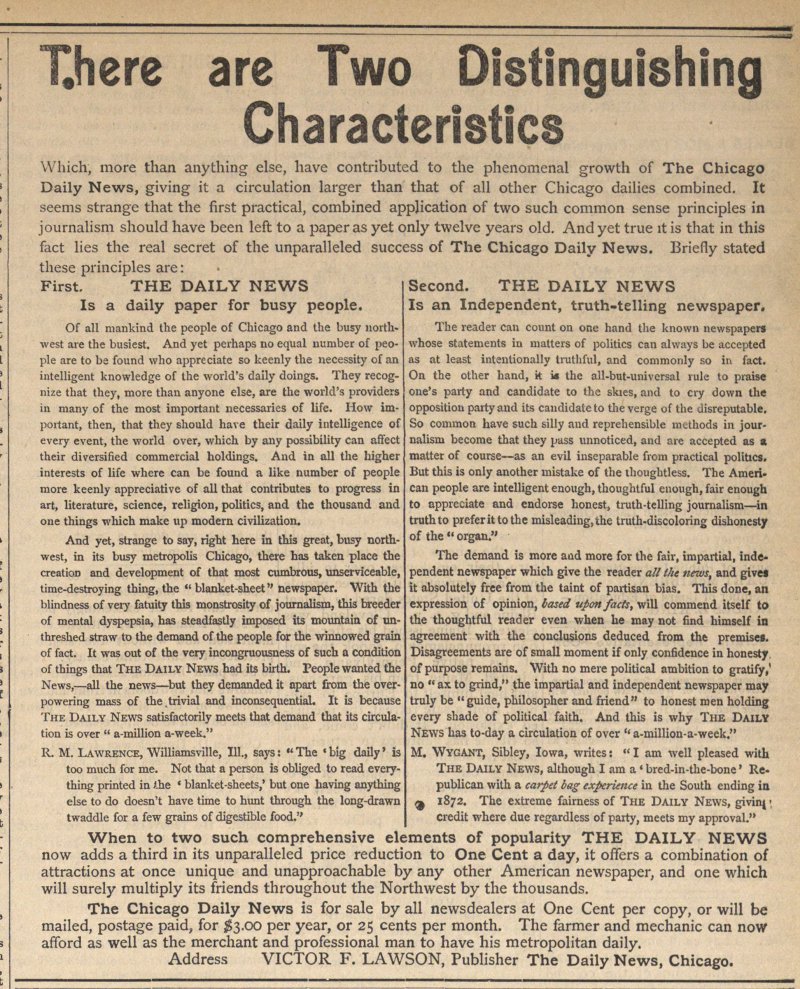 Chicago. Address VÍCTOR F. LAWSON, Publisher T.here are Two Distinguishing Characteristics Which, more than anything else, have contributed to the phenomenal growth of The Chicago Daily News, giving it a circulation larger than that of all other Chicago dailies combined. It seems strange that the first practical, combined application of two such common sense principies in journalism should have been left to a paperas yet only twelve years old. And yet true it is that in this fact lies the real secret of the unparalleled success of The Chicago Daily News. Briefly stated these principies are: First. THE DAILY NEWS Second. THE DAILY NEWS Is a daily paper for busy people. Is an Independent, truth-telling newspaper. Of all mankind the people of Chicago and the busy The reader can coimt on one hand the known newspapen west are the busiest. And yet perhaps no equal uumber of whose statements in matters of politics can alvvays be accepted ple are to ba found who appreciate so keenly the necessity of an as at least intentionally truthful, and commonly so in fact. intelligent knowledge of the world's daily doings. They On the other hand, it ie the all-but-universal rule to praise nize that they, more than anyone else, are the world's providers one's party and candidate to the skies, and to cry down the in many of the most important necessaries of Ufe. How oppositiou party and its candidate to the verge of the disreputable. portant, then, that they should have their daily intelligence of So coinmon have such silly and reprehensible methods in jourevery event, the world over, which by any possibility can affect nalism becorae that they pass unnoticed, and are accepted as their diversified commercial holdings. And in all the liigher matter of course - as an evil inseparable from practical politics, interests of life where can be found a like number of people But this is only another inistake of the thoughtless. The Amerimore keenly appreciative of all that contributes to progress in can people are intelligent enough, thoughtful enough, fair enough art, literature, science, religión, politics, and the thousand and to appreciate and endorse honest, truth-telling journalism - in one things which make up modem civilization. truthto preferittothe misleading,the truth-discoloring dishonesty And yet, strange to say, right here in this great, busy " "e " rgan." west, in its busy metropolis Chicago, there has taken place the The demand is more and more for the fair, impartial, indecreatioD and development of that most cumbrous, unserviceable, pendent newspaper which give the reader all the news, and givei time-destroying thing, the " blanket-sheet " newspaper. With the it absolutely free from the taint of partisan bias. This done, an blindness of very fatuity this monstrosity of journalism, this breeder expression of opinión, based uponfacts, will commend itself t of mental dyspepsia, has steadfastly imposed its mountain of the thoughtful reader even when he may not find himself in threshed straw to the demand of the people for the winnowed grain agreement with the conclusions deduced from the premisei. of fact. It was out of the very incongruousness of such a condition Disagreements are of small moment if only confidence in honesty. of things that The Daily News had its birth. People wanted the of purpose remains. With no mere politica! ambition to gratify,1 News, - all the news - but they demanded it apart from the no " ax to grind," the impartial and independent newspaper may powering mass of the. trivial and inconsequentiaL It is because truly be "guide, philosopher and friend" to honest men holding The Daily News satisfactorily meets that demand that its every shade of political faith. And this is why The Daily tion is over " a-million a-week." News has to-day a circulation of over " a-million-a-week." R. M. Lawrence, Williamsville, 111., says: "The 'big daily' is M. Wygant, Sibley, Iowa, writes: lam ivell pleased with too much for me. Not that a person is obliged to read The Daily News, although lama' bred-in-the-bone ' Rething printed in the blanket-sheets,' but one having anything publican with a carptt bag experitnee in the South ending in else to do doesn't have time to hunt through the long-drawn 1872. The extreme fairness of The Daily News, givin twaddle for a few grains of digestible food." credit where due regardless of party, meets my approval." When to two such comprehensive elements of popularity THE DAILY NEWS now adds a third in its unparalleled price reduction to One Cent a day, it offers a combination of attractions at once unique and unapproachable by any other American newspaper, and one which will surely multiply its friends throughout the Northwest by the thousands. The Chicago Daily News is for sale by all newsdealers at One Cent per copy, or will be mailed, postage paid, for #3.00 per year, or 25 cents per month. The farmer and mechanic can now afford as well as the merchant and professional man to have his metropolitan dailv.