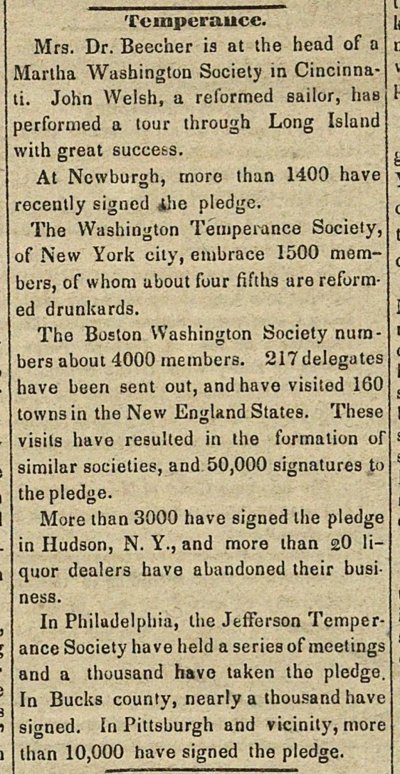 Mrs. Dr. Beecher is at the head of a Martha Washington Society in Cincinnati. John Welsh, a reformed sailor, has performed a tour through Long Island vith great success. At Newburgh, moro than 1400 have recently signed the pledge. The Washington Temperance Society, of New York city, embrace 1500 raembers, of whom about four fifths are reformed drunkards. The Boston Washington Society numbers about 4000 members. 217 delegates have been sent out, and have visited 160 towns in the New England States. These visits have resulted in the formation of similar societies, and 50,000 signatures to the pledge. More than 3000 have signed the pledge in Hudson, N. Y., and more than 20 liquor dealers have abandoned their business. In Philadelphia, the Jefferson Temperance Society have held a series of meetings and a thousand have taken the pledge. In Bucks county, nearly a thousand have signed. In Pittsburgh and vicinity, more than 10,000 have signed the pledge.