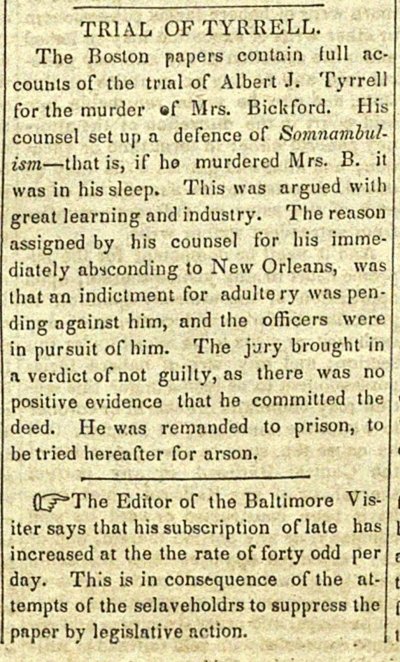 The Boston papers contai (uil accounts of the tnal of Albert J. Tyrrell forthemurder f Mrs. Bickford. His counsel set up a defence of Somnambulism - that is, i f ho murdered Mrs. B. it was n his sleep. Th s was argued wilh great learning and industry. The reason assigned by his counsel tbr his immediately alwconding to New Orleans, was tliatan indictment for adultery was pending against him, and the oificers were in pursuit of him. The jury brought in a verdict of not guilty, as there was no positivo evidenco that he committed the deed. He was remanded to prison, to be tried hereafter for arson. (tThe Editor of the Baltimore Visiter says that his subscription of late has increased at the the rate of forty odd per day. This is in consequence of the attempts of the selaveholdrs to suppress the pnpor by legislative nrtion.