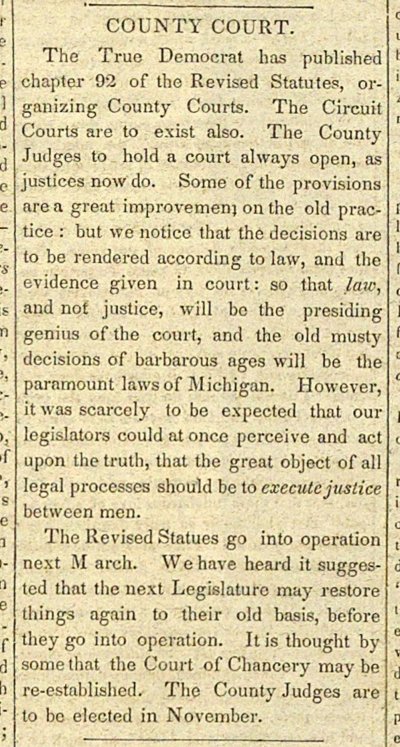 The True Democrat has published chapter 92 of the Revised Statu te?, organizing County Courts. The Circuit Courls are to exist also. The County Judges to hold a court always open, as justiccs now do. Some of the provisions are a great improvemenj on the old practice : but we noticc that the decisions are to be rendcred according to law, and the evidence given in court: so that law, and not justice, will bc the presiding genius of the court, and the old musty decisions of barbarous ages will be the paramount laws of Michigan. However, it was scarcely to be expected that our lcgislators couldatonce percel ve and act upon thetruth, that the great object of all legal processes should be to executc justice betwecn men. The Revised Statues go into operation next M arch. We have heard it suggestcd that the next Legislaturc may restore things again to their old basis, before they go into operation. It is thought by some that the Court of Chancery may be re-established. The County Judges are to be elected in November.