From The Seat Of War 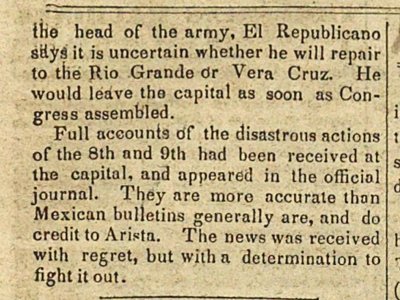 The New Orleans Tropic of the 4t, inst., contains a letter Trom Thomas B Thorpe, one of its Ã¨ditors, writteh on the 28lh May, at Matamoras, from Col Twigg's head qunrters. We learn from t that some Mexican traders had toldthe Colonel that the Mexicans are retreatin? towards Monterey ; that Ampudia had obtained the ascendancy in the arrhy, and had Arista as a prisonef. It is nowascertained - and (Jen. Taylor, who will not be accused of exaggeration, admits it - that iho loss of the Mexicans on the 8th and 9th - particularly on the lattcr day - were much larger thnn was at first supposed. A gentleman who wentthrough the hospitals in Matamoraa, nnd who took some pains to ascertain their number, thinks it must amount tÃ³ 600. ' Many oÃ­ tho oannon, which they aunk in wo'lls and elsewhero, havo been rocovored; Cript. Page is recovÃ«ring. Major Lear, who crosscd the country from Fort Jesup, and for whose safety fears wero entertained, has reached the camp irtsafety1, A quantityof the trophiesof victory, taken or found on the bottle field, is deposited at Point Isabel. They form quita a cabinet of curiosilies. They are all now hurning to have another crack at the Mexicans, nnd the prevailing opiniÃ³n is that "Old Rough and Ready" will before lon# indulge their delire. Capt May and his commam) are still at Point Isabel. Headquarters Army op OccÃ¼pation, City of Matamoras, May 24, 1846. Sir : I have to report the arrival this day of Gen. Smith, with the battalion of the lst infantry, the Washington rogimentof Louisiana volunteers, and a cotnpany of volunteers from Mobile. Anolher regiment of Louisiann. volunteersÃ­s below, aliid wiÃ­l probably arrive this even ing or to-morrow. This command was accompanied from the moulh of the1 river by tlie steamboat Neva, which su'c'ceeded without diiliculty in reaching tlm place. Lieut. Col. Garland refurrÃ¯ctJ oYi the 22d from his expedition in pursuit of the retreaiing army. He succeeded in capturing a small rear party, after atrifling skirmish in the night, in which a man and unibrtunutely a woman, were killed on the Mexican side, and two men slight Jy wounded on our own. He pursuedi the route of the army for sixty miles and then returned ngreeably to his instructio.is. The .cfircity of water and condilion of hts horses made it uselcss to pro"ceed farther. 1 would respeetfully solicit instructions as to the disposition to be mado of certain property captured in the camp of Gen. Arista. A pavillion, and several pieces of massive plato are among the articles. ilis clothing, and other propertv purely personal, have been deposited in this c'rtv u ]h tx view of being returned to him.- I would suggpst that the pavillion be sent to Wnshington, to be disposed of as the President mny direct. The recovery of ordnance and other public stores still continÃºes here. Twt pieces of cannon have been taken from the river, nnd small arms in considerable numbers have been taken in the town. I am, sir, very respectfully, your obedient servant, Z. TAYLOR, Brevet Brig'r Gen. U. S. A.Com'g. The Adjutant General of the Army, Washington, D. C. EMBARGO DKCLARED BY MEXICO- YANKEE VALOR. New Orleans, June 5. The bark Texidor, Capt. Mnjor, has nrrived from Tobasco, whence she sai!, ed on the 23th uit. There was a great excitement pervading there among the reident Americans in consequence of the reception of an order for on "embargo on all American vesseb. The order carne by express from Mexico, and was immediately followed by an order for the capture of Capt. iViiKr's vessel, and at tho same time fifty Mexican soldiers were placed in charge of n New Orleans schooner. There were 400 Mexican soldiers at Tobasco. CÃ¡pt. Major was guarded to his vessel by twenty of his friends, and the soldiers were afraid to make him prisoner.. The schooner Capt. Cox, of New Orleans, was seized and the crew imprisoned. Several English vessels were in port. No American man of wor was seen by the Trexidor. The steamer Ventura was ordered to fire up and give 'â  CÃ¡pt Major. - His vessel liad one gu:i on board, which was cut up in small lengths for shot " to smash the Vcntura's colfec tnill," as the captain says. Hhe did not venture out. Gen. Taylor designs now to be nt Mjntcry as soon as possible. At that place, it is believed, the Mexicans will make a stubborn stand if at all during. the war. If tho troops under Gen. T. occupy Montery, the whole of Mexico insido of the Siera Madre will be in the' possession of the United States, includingthe mining districts of New Leon, New Mexico, Santa Fe, &c. &c. FROM MEXICO. The Picayune of the 2d inst. has the following : The Louisiana sailed in company with the Helen McLeod, leaving no American vessel in port. The blockade of Vera Cruz commenced on the 20th of May ; 15 days were allowed for all neutral vessels to load and depart, by order of the Mexican government. The frigate Raritan on the 25ih found a sloop lying ofT port, which got off in haste to avoid being seized. Gen. Alvarez was still carrying on his hostile preparations in tho south part of Alcxic.%. A report was in circulatin that Gen. Paredes intended to leave the city of Mexico, at the head of more troops, to reinforce the army in thenorth. The great animosity existing against American volunteers was increased. by the intelligence of the 8th and 9th. The government had imposed enormous forced loans upon the clergy. Senor Gondez hns been arrestd by the governmenÃ­. Gen. A lmonte made a formal resignation of his mission to France. In regard to Paredez putting himself at