The North And The South 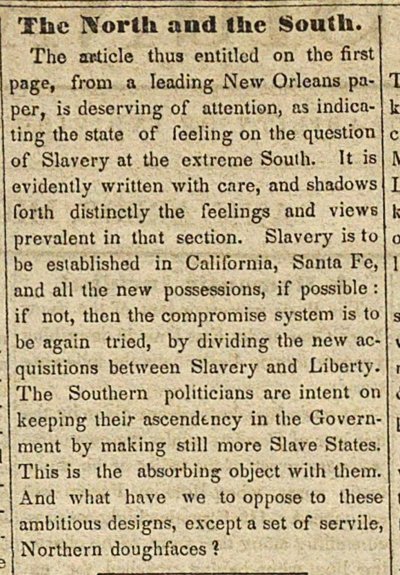 The North and the South. The article thus entitled on the first page, from a leading New Orleans paper, is deserving of attention, as indicating the state of feeling on the question of Slavery at the extreme South. It is evidently written with care, and shadows forth distinctly the feelings and views prevalent in that section. Slavery is to be established in California, Santa Fe, and all the new possessions, if possible : if not, then the compromise system is to be again tried, by dividing the new acquisitions between Slavery and Liberty. The Southern politicians are intent on keeping their ascendency in the Government by making still more Slave States. This is the absorbing object with them. And what have we to oppose to these ambitious designs, except a set of servile, Northern doughfaces?