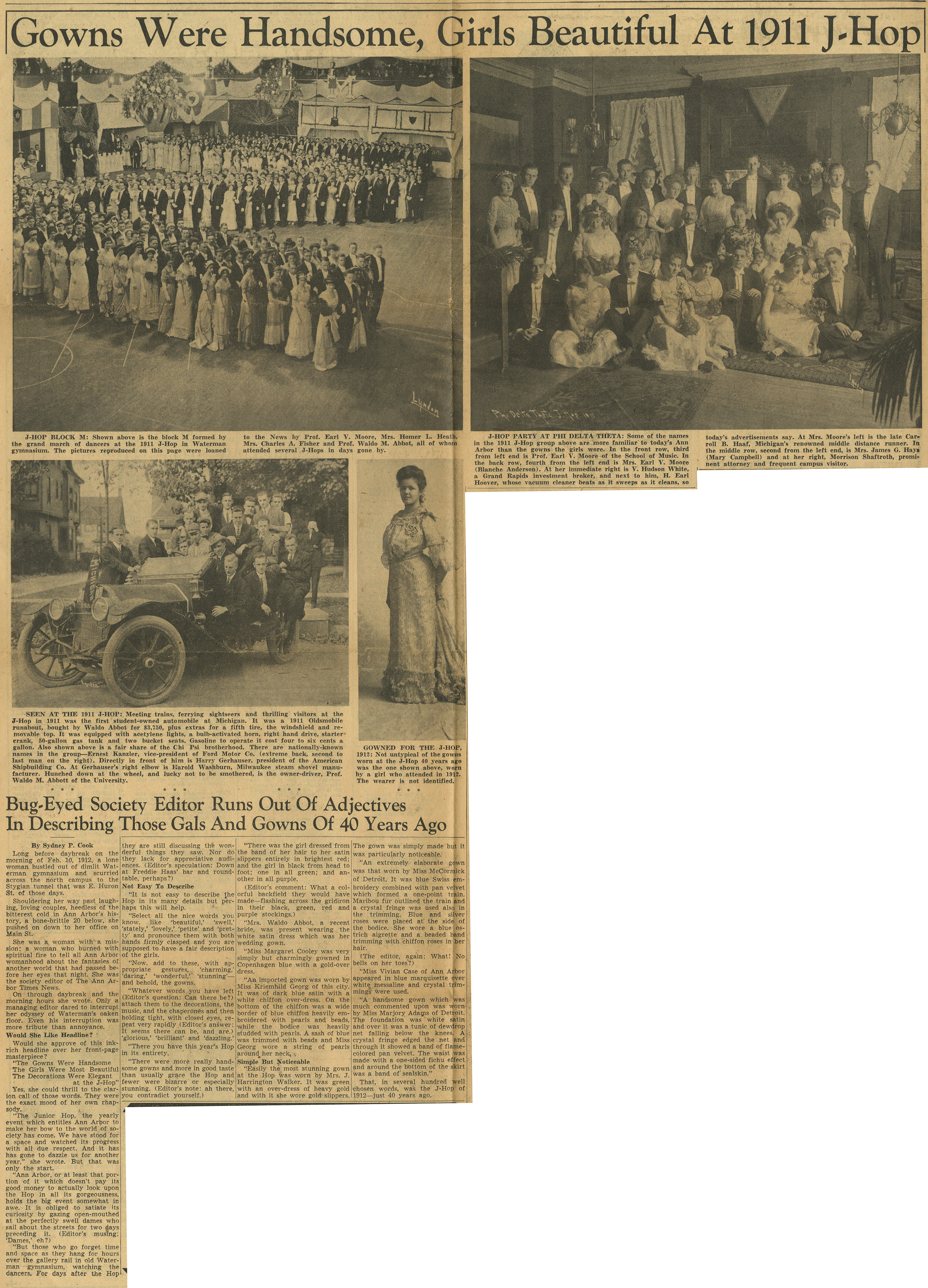 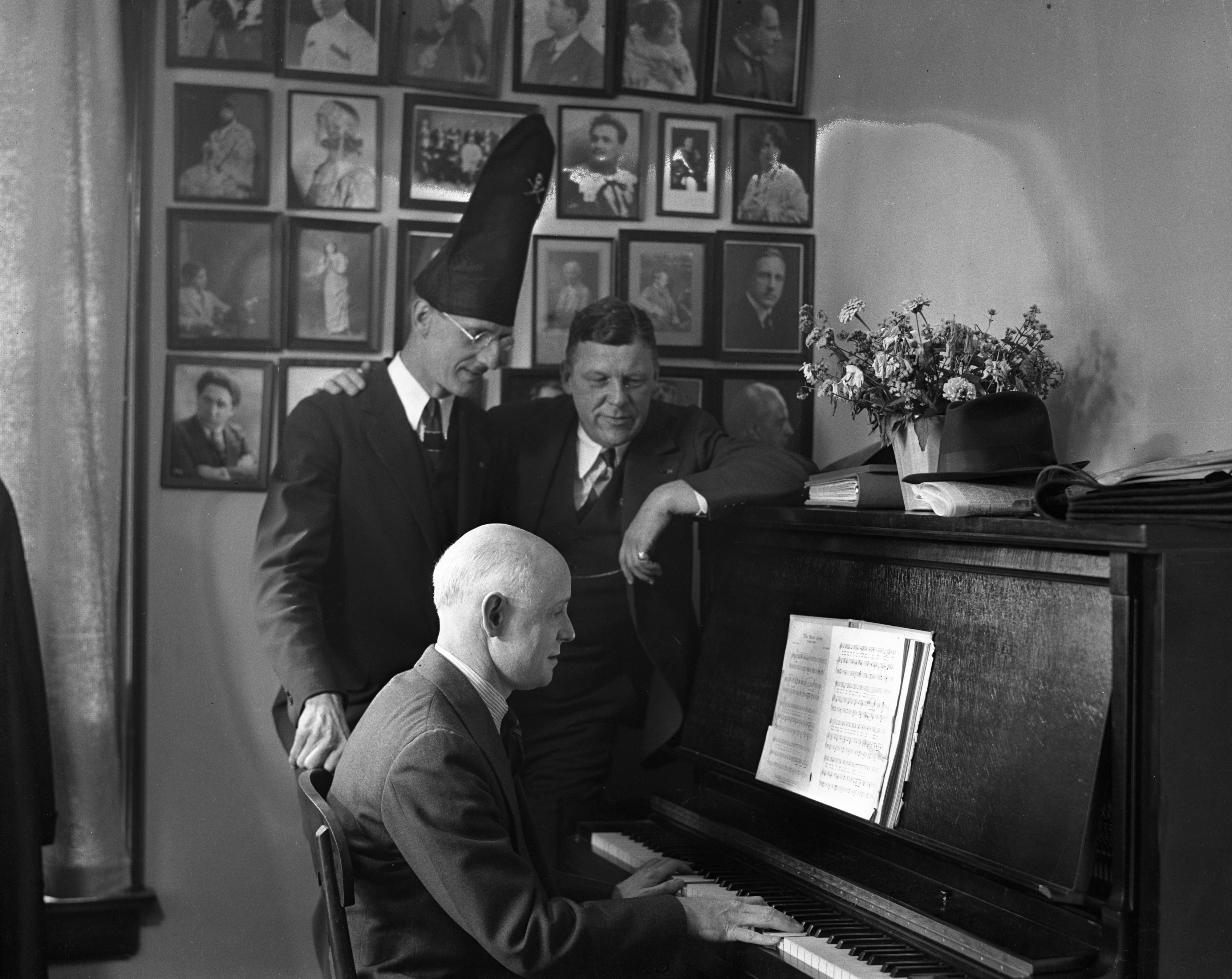 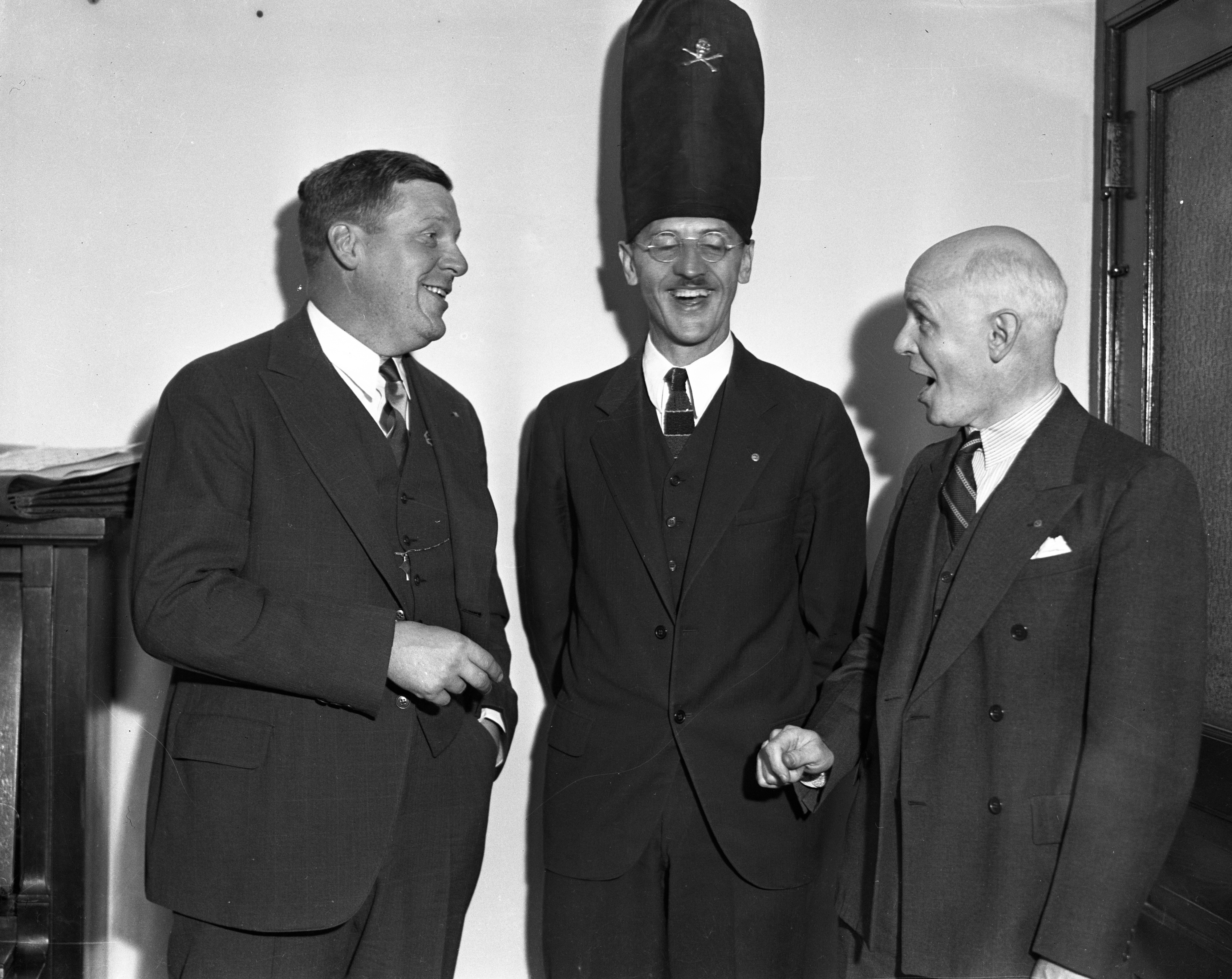 Published In
Ann Arbor News, June 14, 1937
Caption
Few Michigan songs have achieved the popularity of that famous tune from the Union opera "The Crimson Chest" of 1910. Earl V. Moore, right, now director of the School of Music was the composer and J. Fred Lawton, left, Detroit lawyer, contributed the words. Walter Staebler, Ann Arbor business man, center, was a member of the original Bum Army, and cherishes the death's head set he wore in the opera. The picture above was taken recently when the three held an informal reunion.
Copyright
Copyright Protected 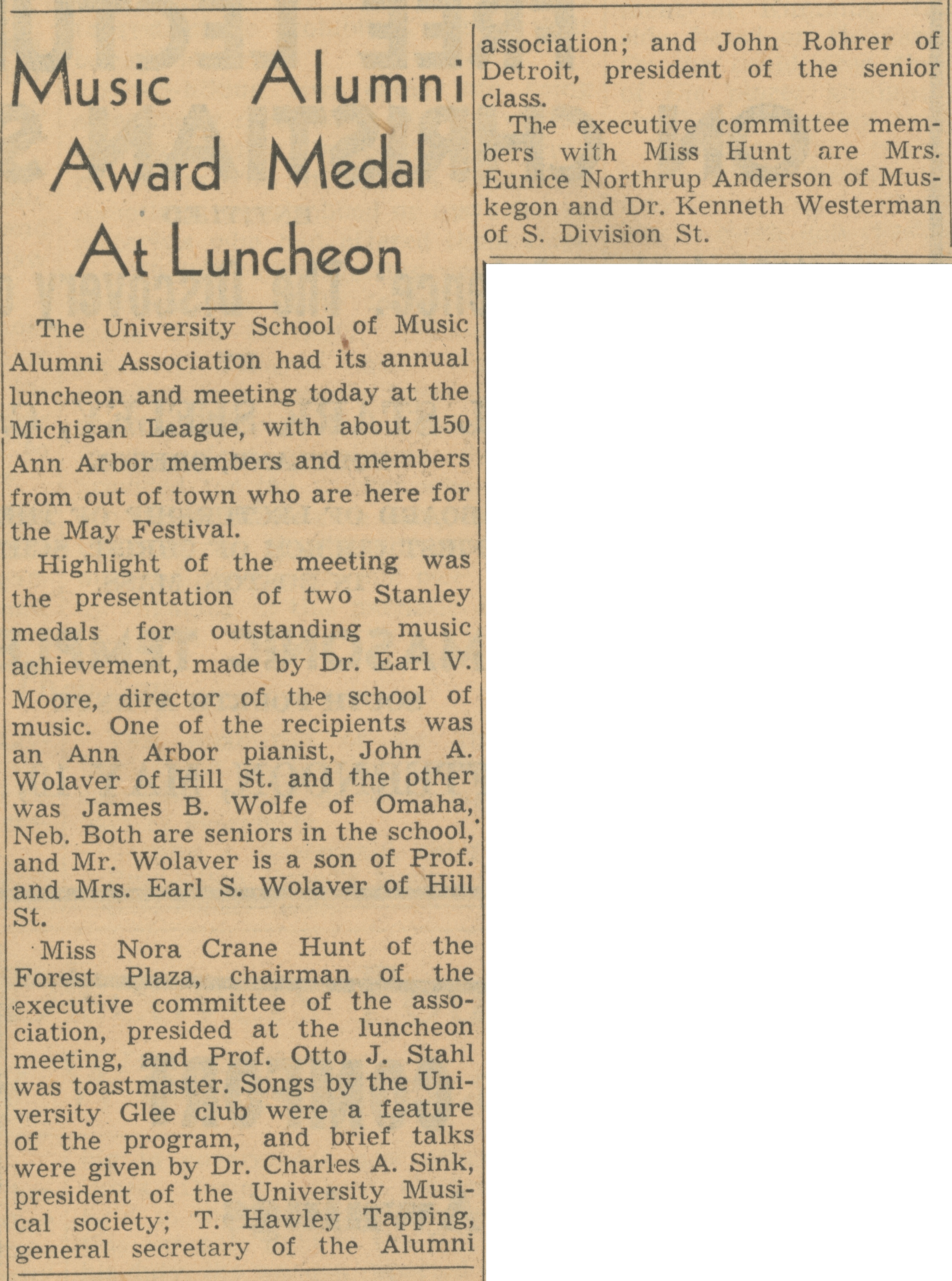 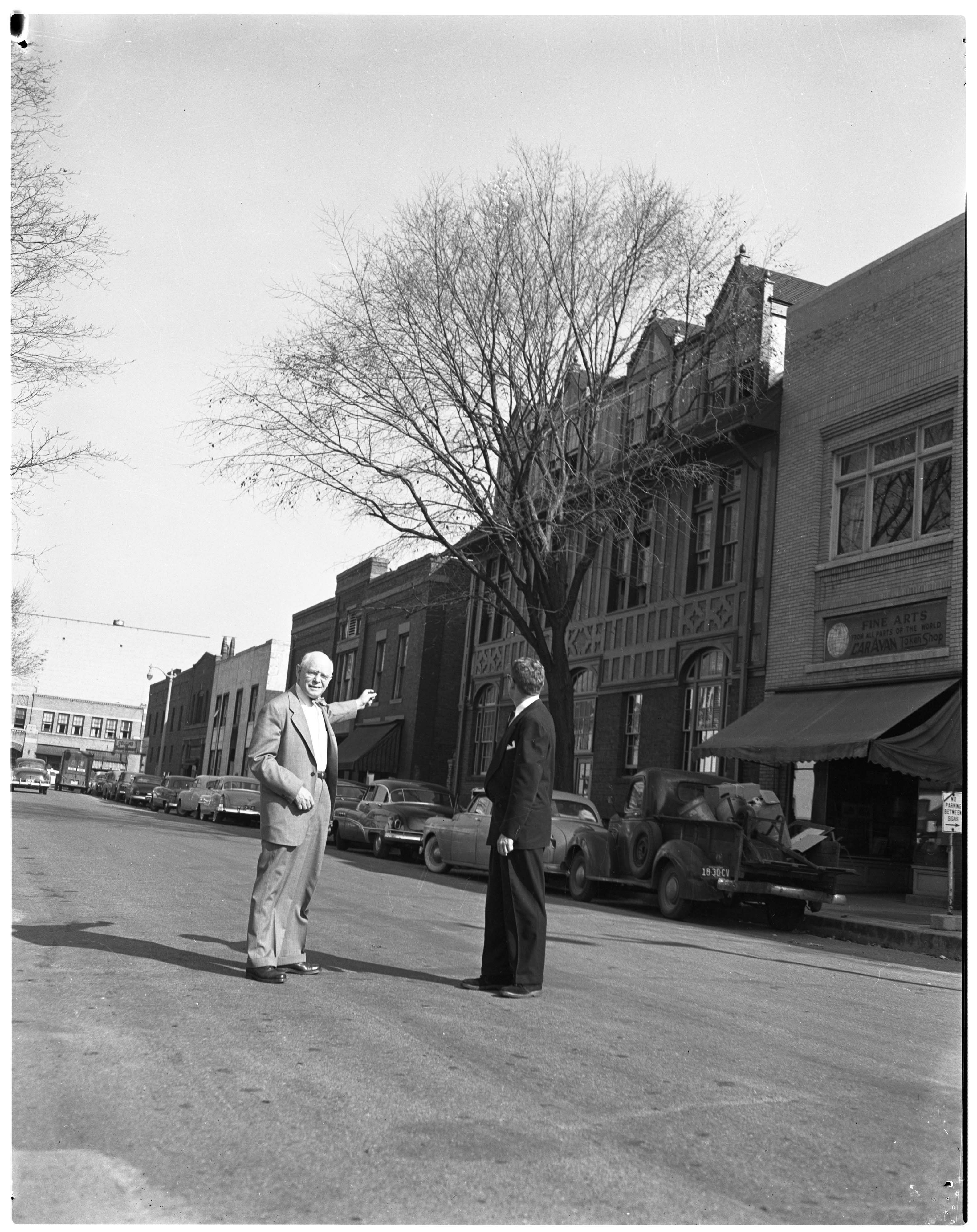 Published In
Ann Arbor News, April 24, 1973
Caption
From Our Pictorial Archives, Ann Arbor 1941 (published April 24, 1973): If you thought environmental concerns started in the 1960's you might be right about some places, but not Ann Arbor. Ann Arbor was fighting over preservation of trees at least as far back as 1951. Music School Dean Earl V. Moore (left) seems to be saying: "How could anyone want to cut down such a magnificent tree?" And Music School Secretary James B. Wallace (right) is in complete agreement. It was October 1951, and Music School officials were embroiled with city officials in one of the most dramatic Town and Gown confrontations in Ann Arbor history. The elm shaded the old Music School building on Maynard St., but its also narrowed the sidewalk and its roots kept growing into sewers along the street. The Board of Public Works ordered it destroyed, but Music School officials won a reprieve from the Parks Department with an "impassioned appeal." The City Council upheld the BPW in a 9-4 vote, and then Council President Cecil O. Creal, acting mayor in the absence of Mayor William E. Brown Jr., vetoed the council's action, saying that "in this day and age we're apt to be ruthless in our efforts to make progress." Later that fall the episode of the tree was dramatized in the half-time U-M band show at the Michigan-Northwestern game. Unfortunately the only tree on the east side of Maynard St. lived only a short time longer anyway, crowded as it was by concrete and utility lines. Jacobson's and the city's Maynard Street parking structure extension now occupy the area taken up by the Collins Shoppe, the University Press Building, Ann Arbor Press and the Music Building.
Copyright
Copyright Protected 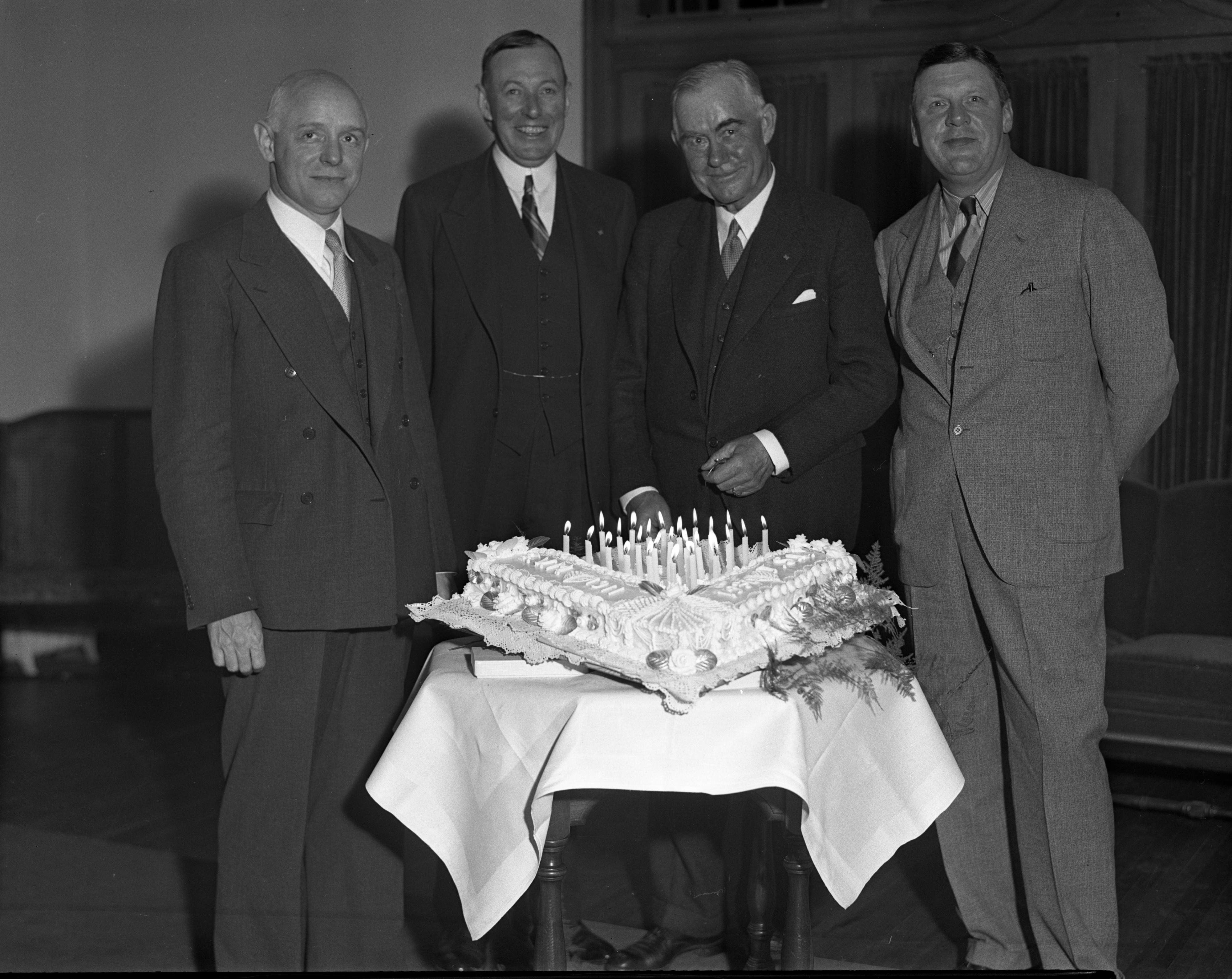 Published In
Ann Arbor News, October 10, 1936
Caption
Celebrating The Birthday Of 'Varsity': The composers of one of Michigan's most popular songs Dr. Earl V. Moore and J. Fred Lawton, were honored at a dinner given by Regent James O. Murfin in the Michigan Union last night. One of the features was a birthday cake lighted by 25 candles. Left to right: Dr. Moore, musical director of the University; Regent Murfin; Athletic Director Fielding H. Yost, to whom the song was dedicated, and Mr. lawton. Their wives also were present.
Copyright
Copyright Protected

Thousands Will Listen to 'Messiah" Tonight 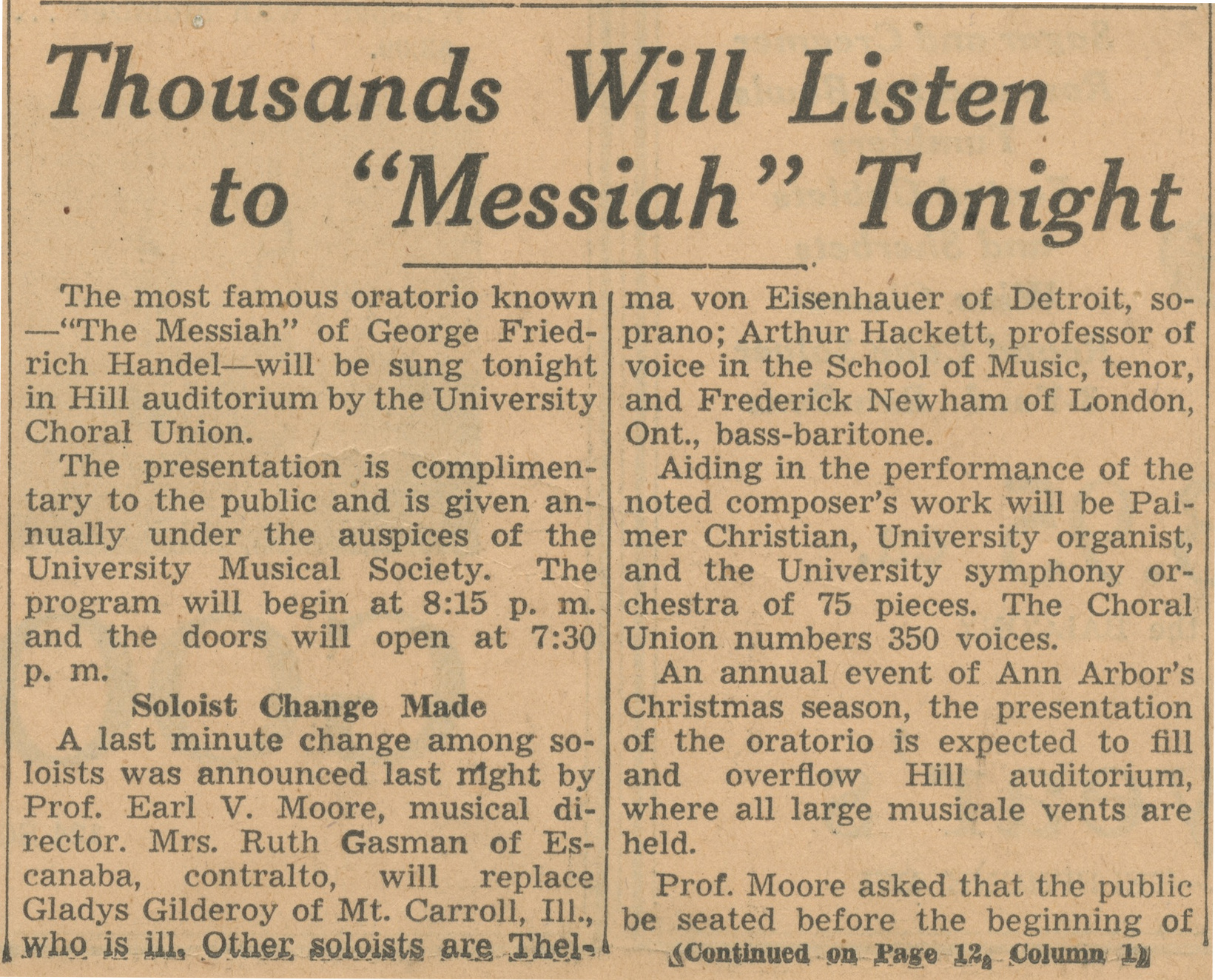