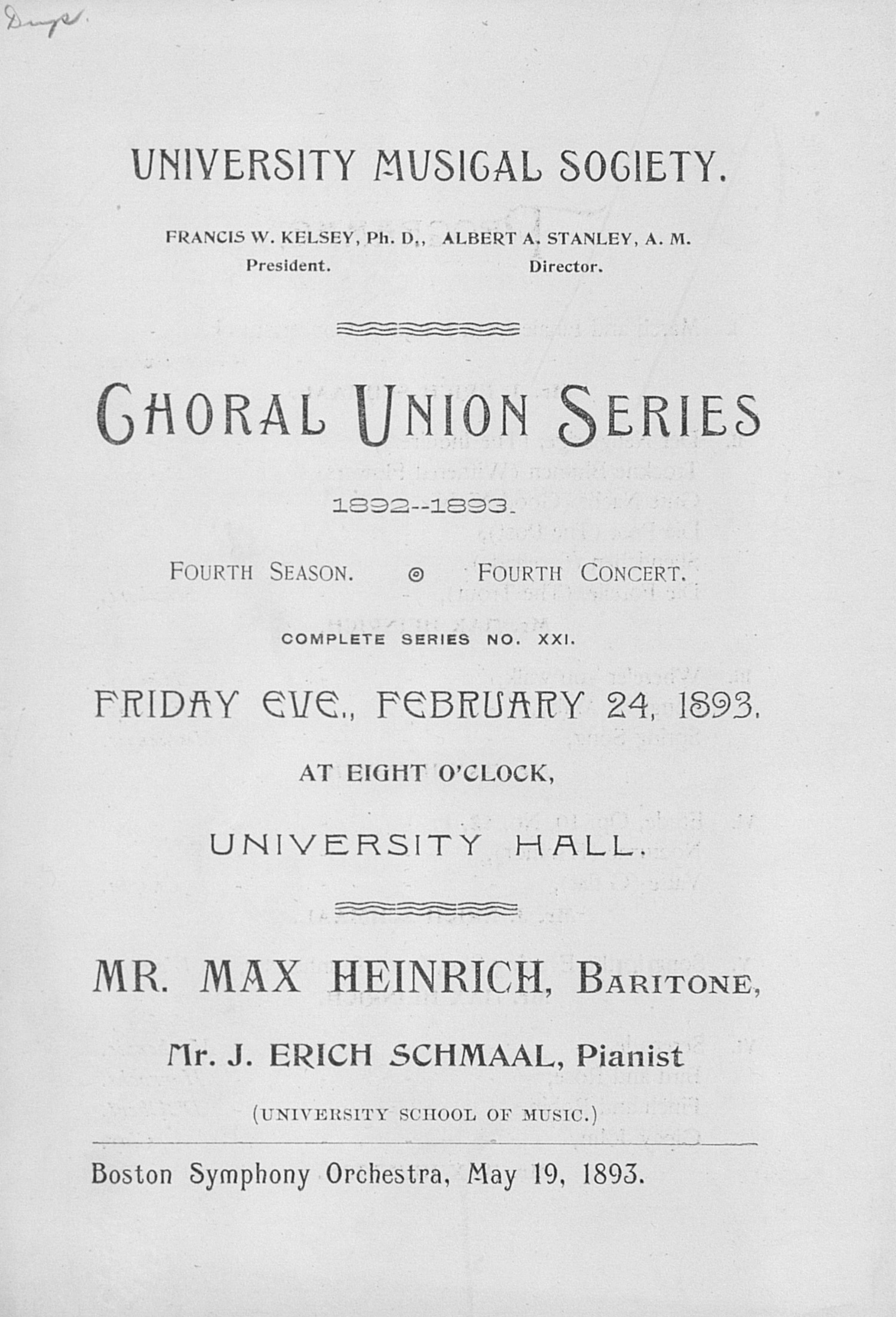 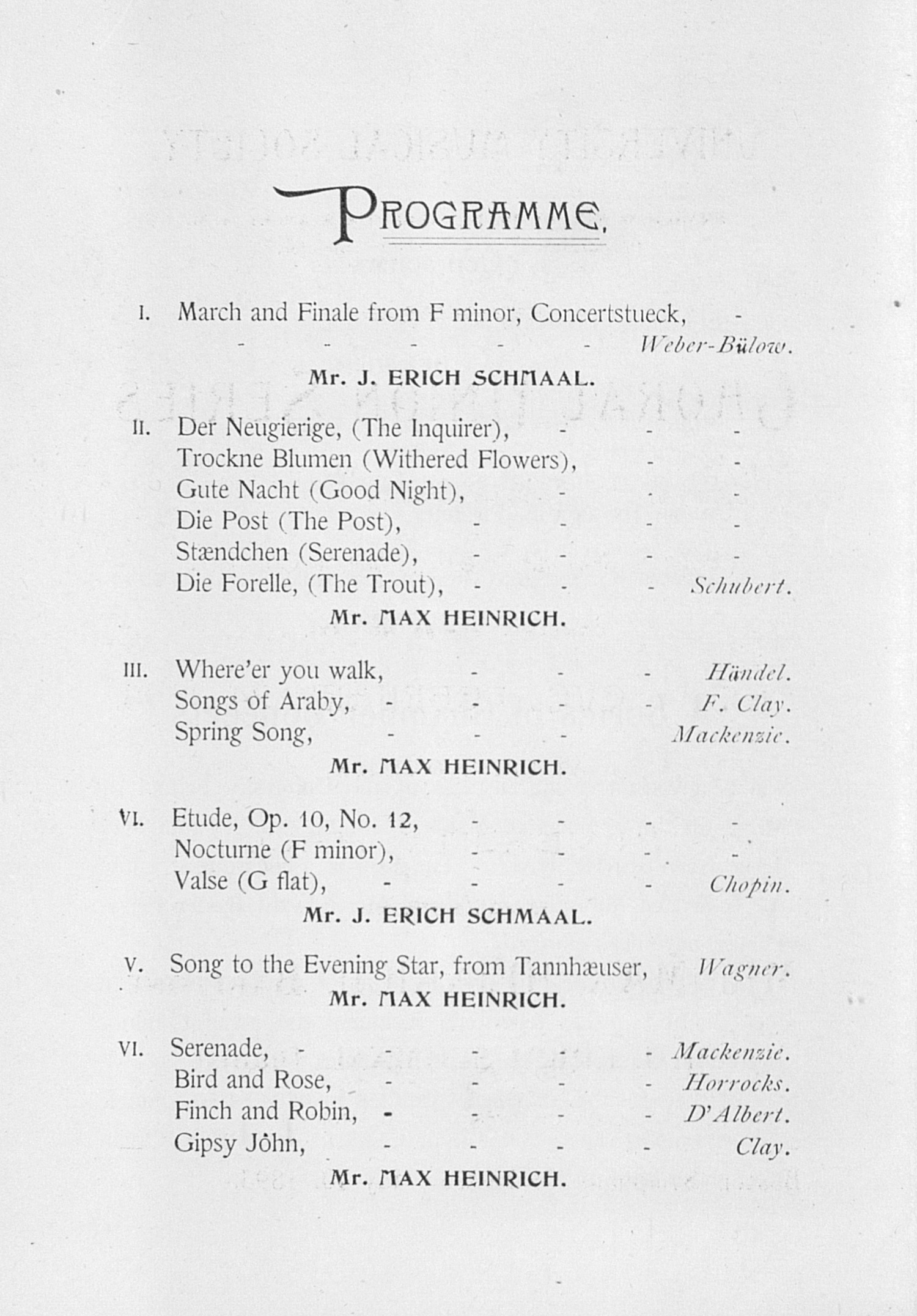 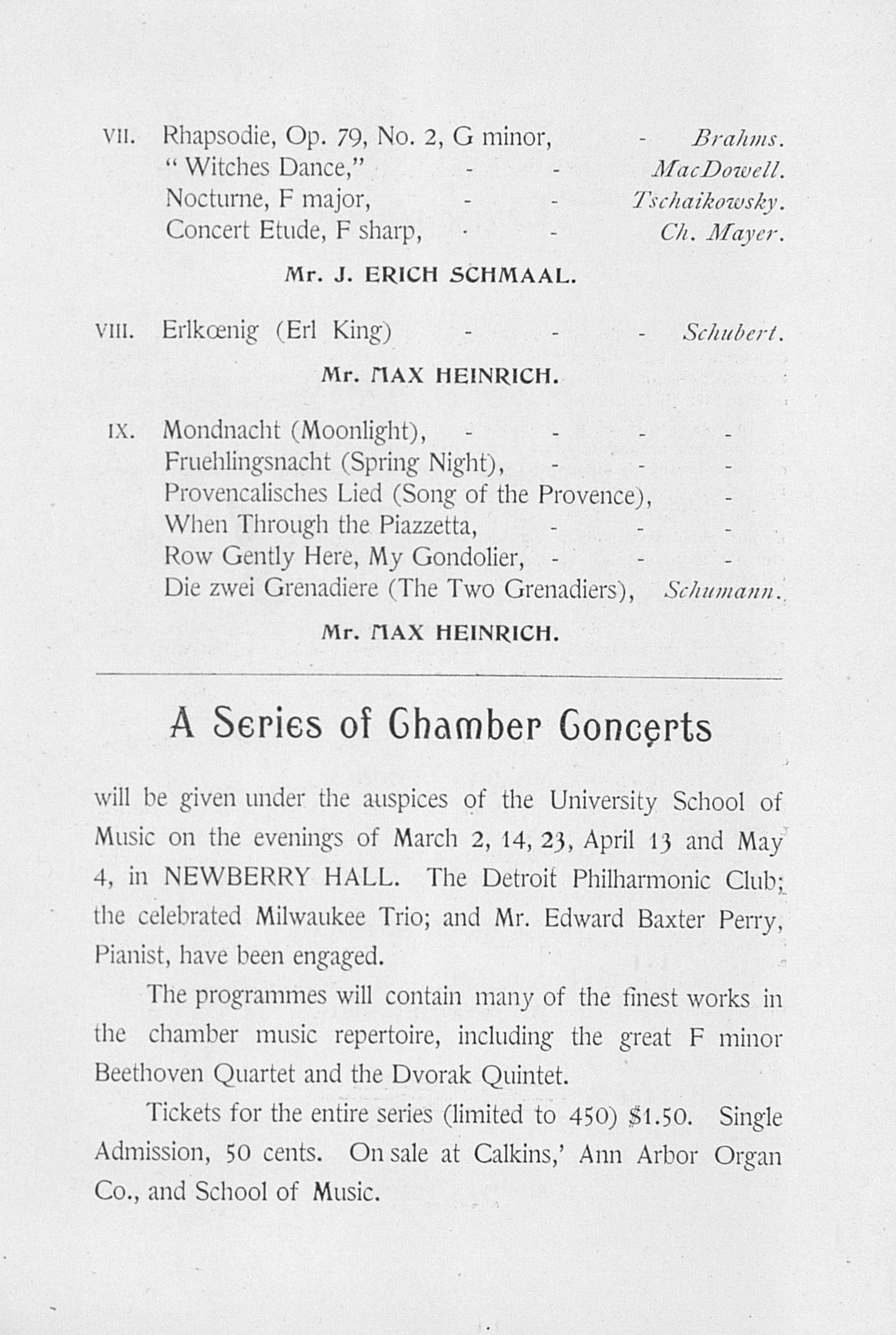 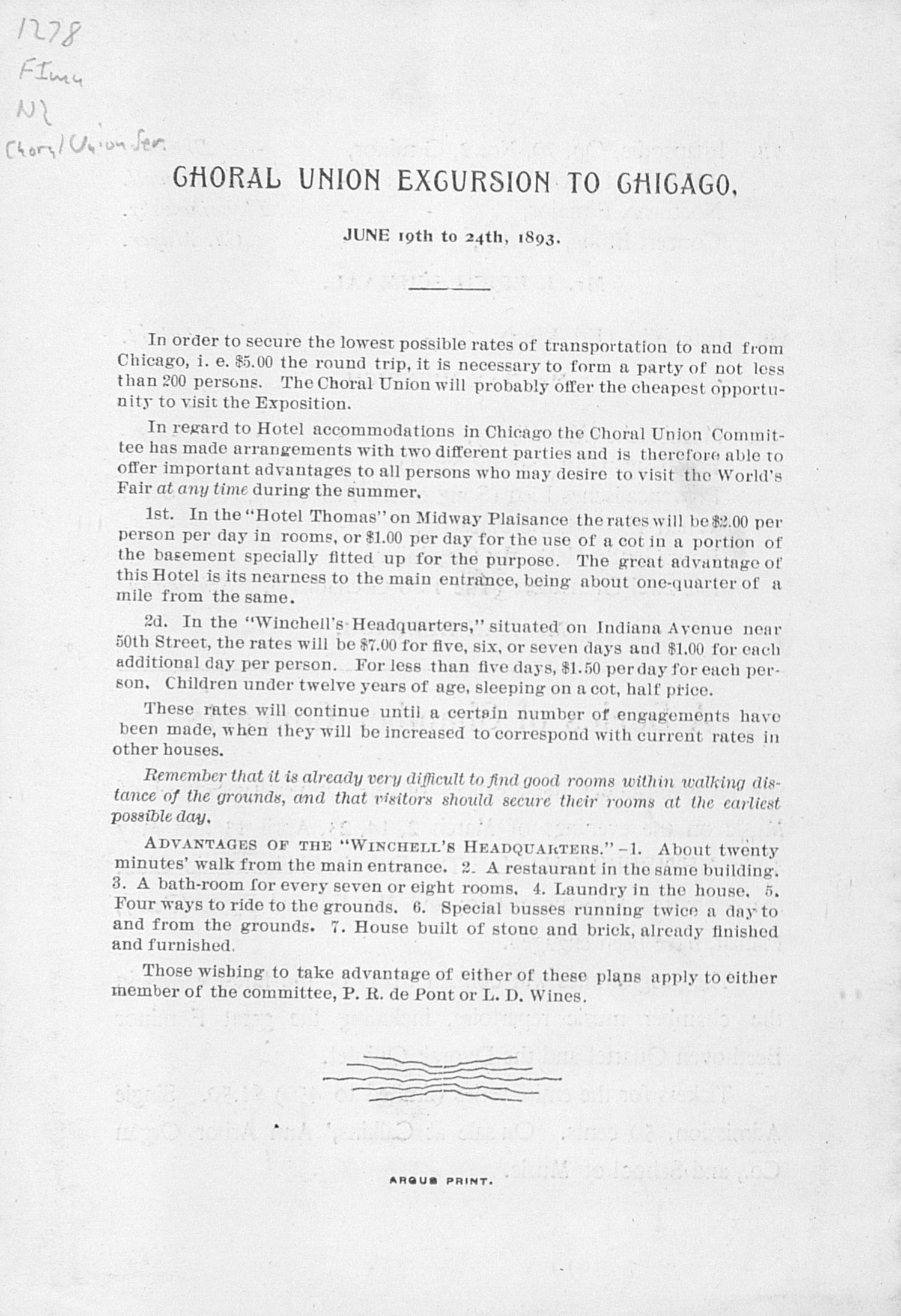 vii. Rhapsodie, Op. 79, No. 2, G minor, Brahms.
" Witches Dance," MacDotvell.
Nocturne, F major, Tschaikowsky.
Concert Etude, F sharp, Ch. Mayer.
Mr. J. ERICH SCHMAAL.
Viil. Erlkoenig (Erl King) Schubert.
Mr. nAX HEINR1CH.
i.. Mondnacht (Moonlight), ...
Fruehlingsnacht (Spring Night), ' Provencalisches Lied (Song of the Provence), When Through the Piazzetta, Row Gently Here, My Gondolier, Die zwei Greiiadiere (The Two Grenadiers), Schumann..
Mr. HAX HEINRICH.
A Series of Ghamber Concerts
will be given under the auspices of the University School of Music on the evenings of March 2, 14, 23, April 13 and May 4, in NEWBERRY HALL. The Detroit Philharmonic Club;, the celebrated Milwaukee Trio; and Mr. Edward Baxter Perry, Pianist, have been engaged.
The programmes will contain many of the finest works in the chamber music repertoire, including the great F minor Beethoven Quartet and the Dvorak Quintet.
Tickets for the entire series (limited to 450) $1.50. Single Admission, 50 cents. On sale at Calkins,' Ann Arbor Organ Co., and School of Music.
GfiORAL UNION EXGURSION TO CHICAGO,
JUNE 19th to 24th, 1803.
In order to secure the lowest possible rates of transportation to and from Chicago, i. e. $3.00 the round trip, it is necessary to form a party of not loss than 200 persons. The Choral Union will probably offer the cheapest opportunity to visit the Exposition.
In rejrard to Hotel accommodations in Chicago the Choral Union Conuniltec has made arrangements with two different parties and is therefore able to offer important advantages to all persons who niuy desire to visit the World's Fair at any time during the summer,
1st. In the"Hotel Thomas"on Midway Plaisanee theratrswill befc.'.OO per person per day in rooms, or $1.00 per day for the use of a cot in a portion of the basement specially tltted up for the purpose. The great advantaged' this Hotel is its nearness to the main entrance, being about one-quarter of a mile from the same.
2d. In the "Winehell's Headquarters," situated on Indiana Avenue near 50th Street, the rates will be 17.00 for five, six, or seven days and $1.00 for each additional clay per person. Forles6 than five days, II.i"0 porday for each person. Children under twelve years of age, sleeping on a cot, half price.
These rates will continue until a certain number of engagements have been made, when they will be increased to correspond with curreut rates in other houses.
Bemcmbcr that it in already very difficult to find uood rooim within walking distance nf the grounds, and t)iat visitors should secure their rooms at the earliest possiblt day.
Advantages of the "Winoheix's Hkadquauteiss." -1. About twenty minutes' walk from the main entrance. 2. A restaurant in the gimic building. 3. A bath-room for every seven or eight rooms, 4. Laundry in the house, ". Four ways to ride to the grounds. 0. Special busses running twice a day to and from the grounds. 7. House built of stoue and brick, already finished and furnished.
Those wiBbing to take advantage of either of these plans apply to either member of the committee, P. H. de Pont or L. D. Wines.
AROUB PRINT.