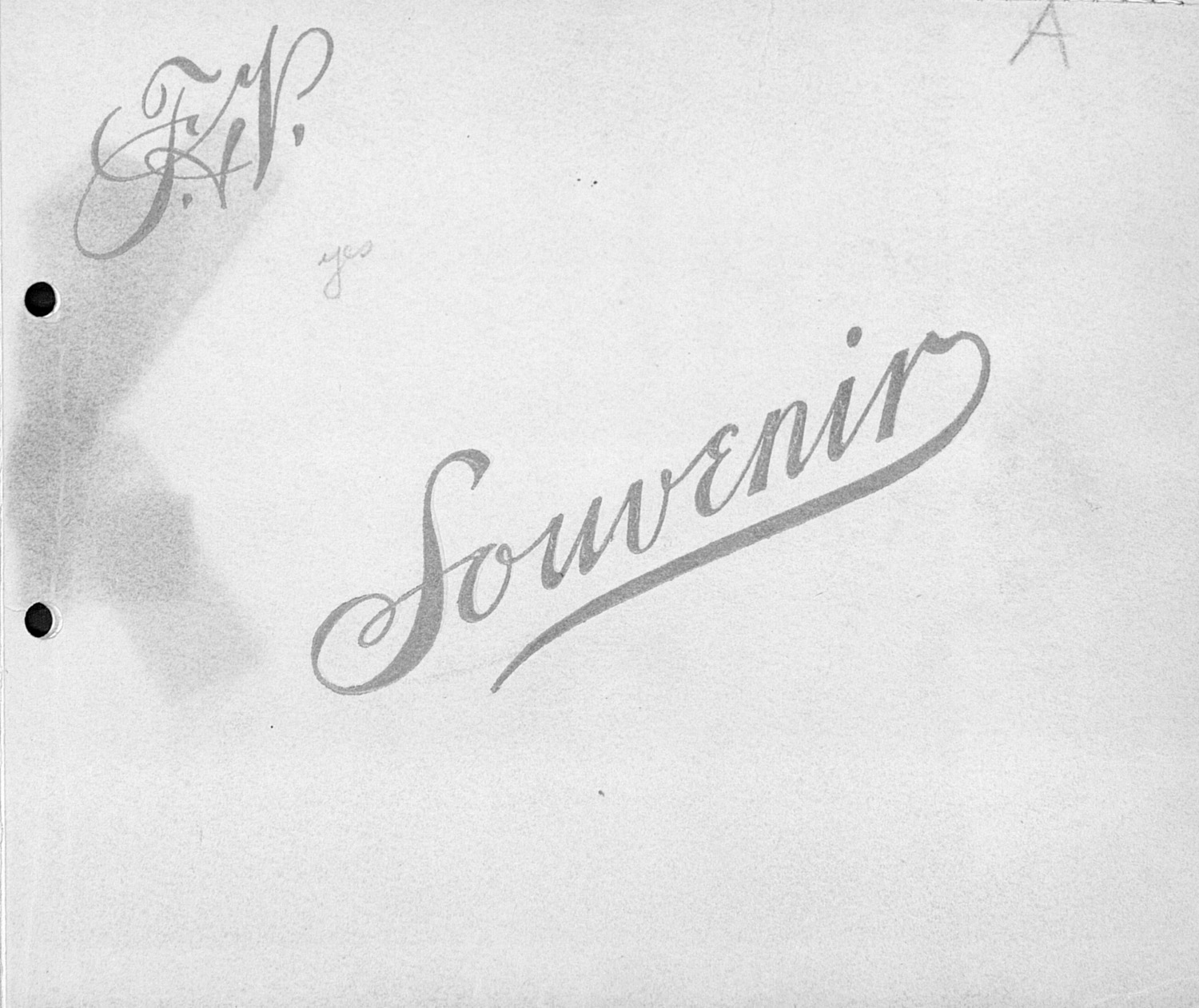 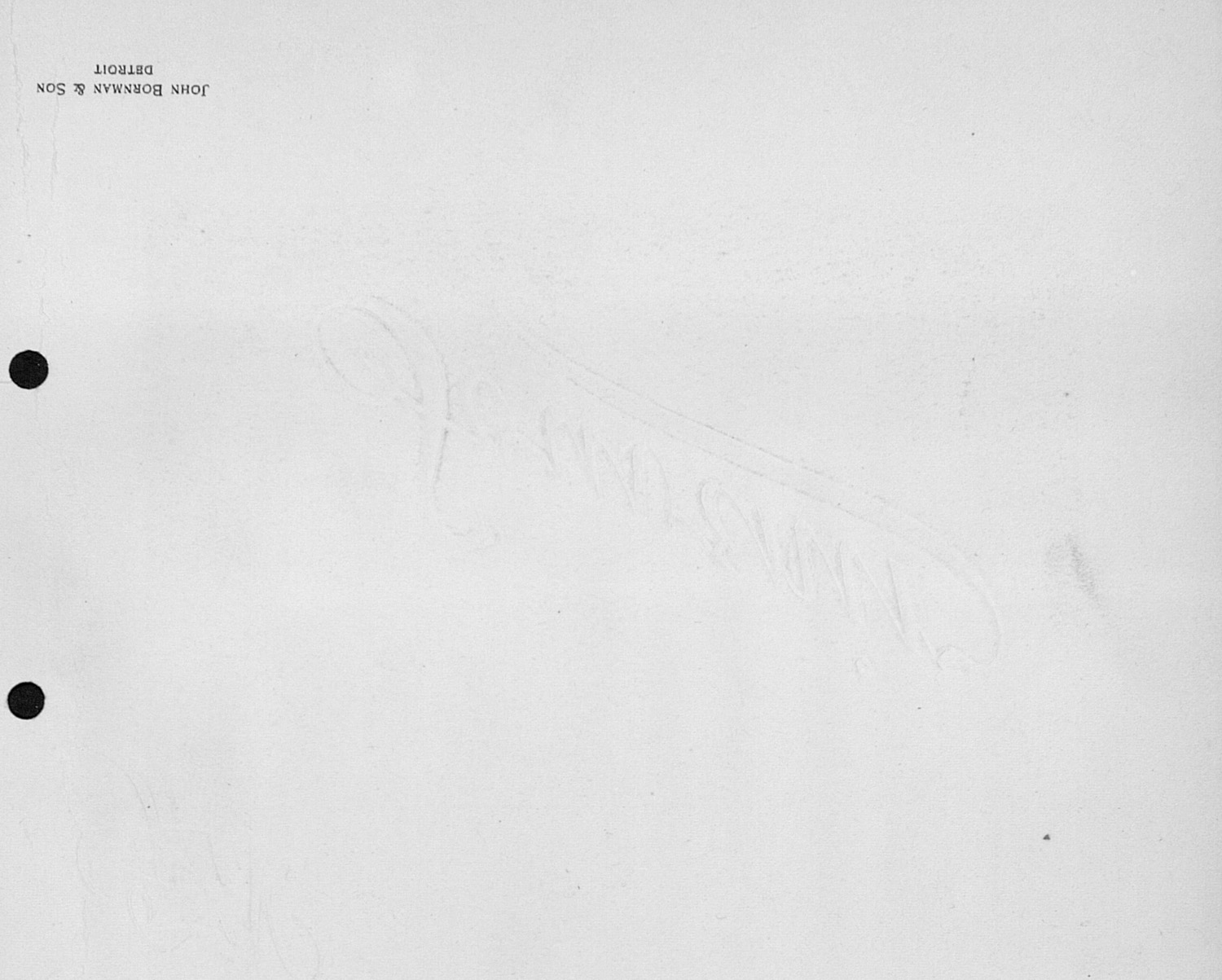 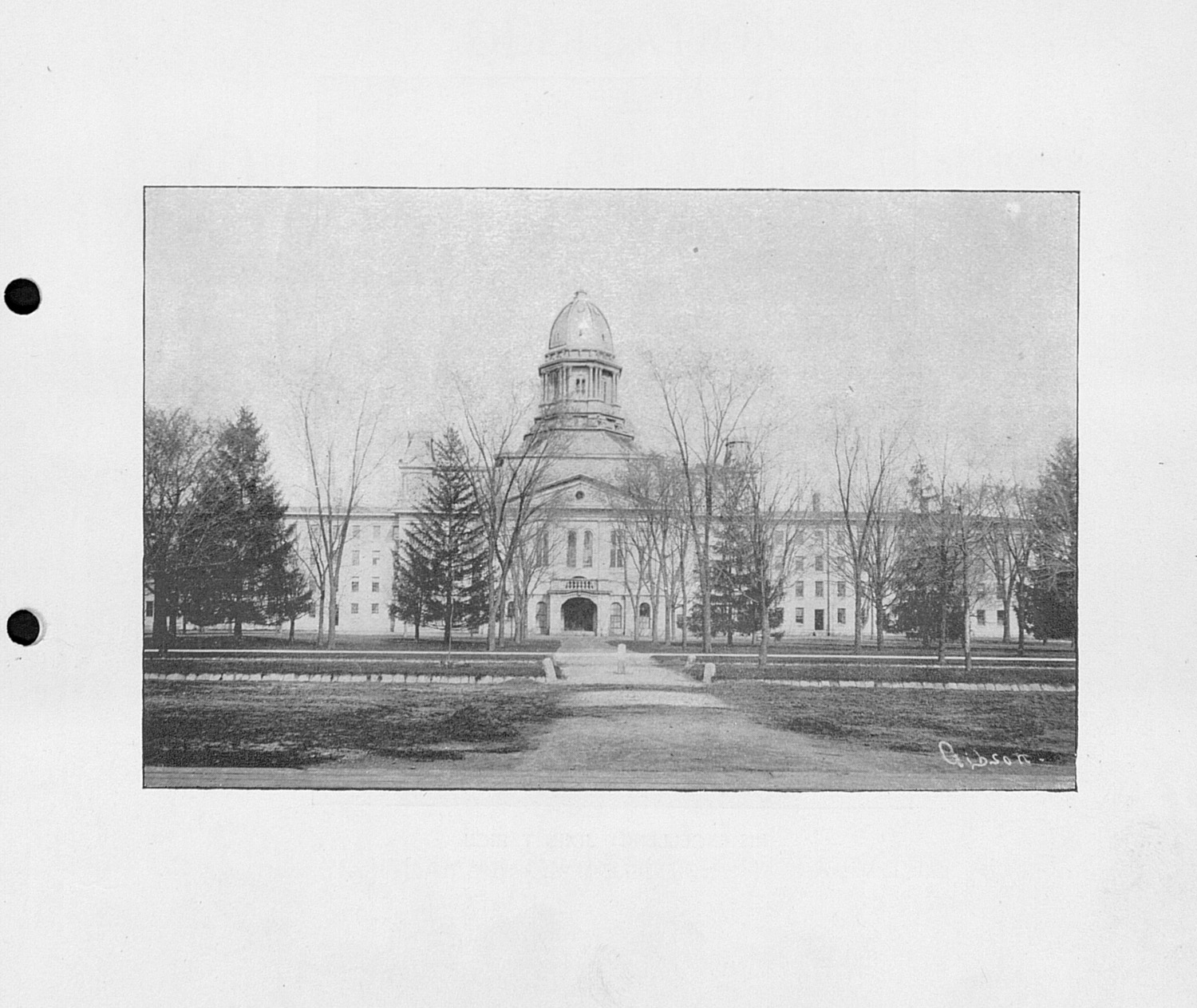 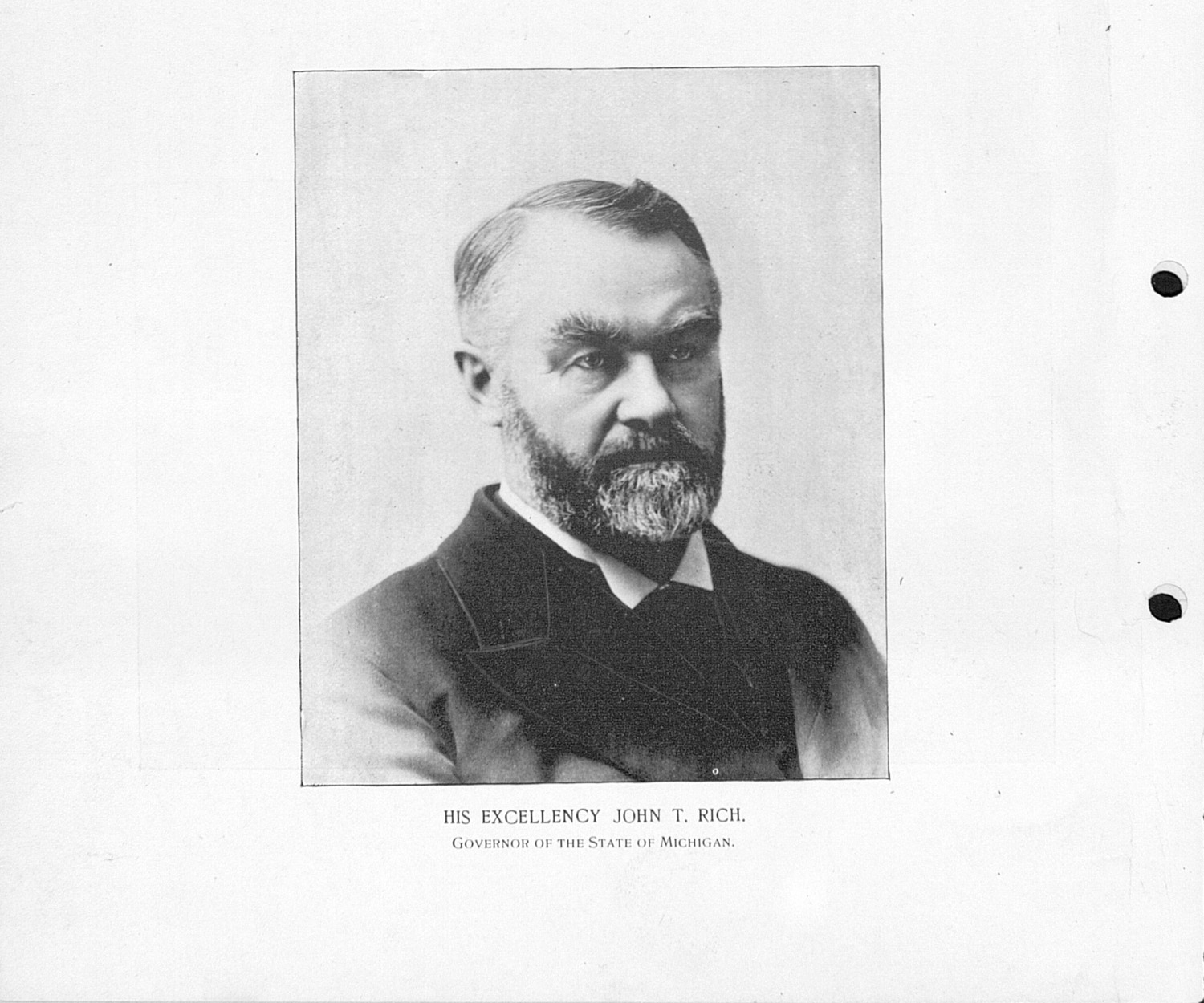 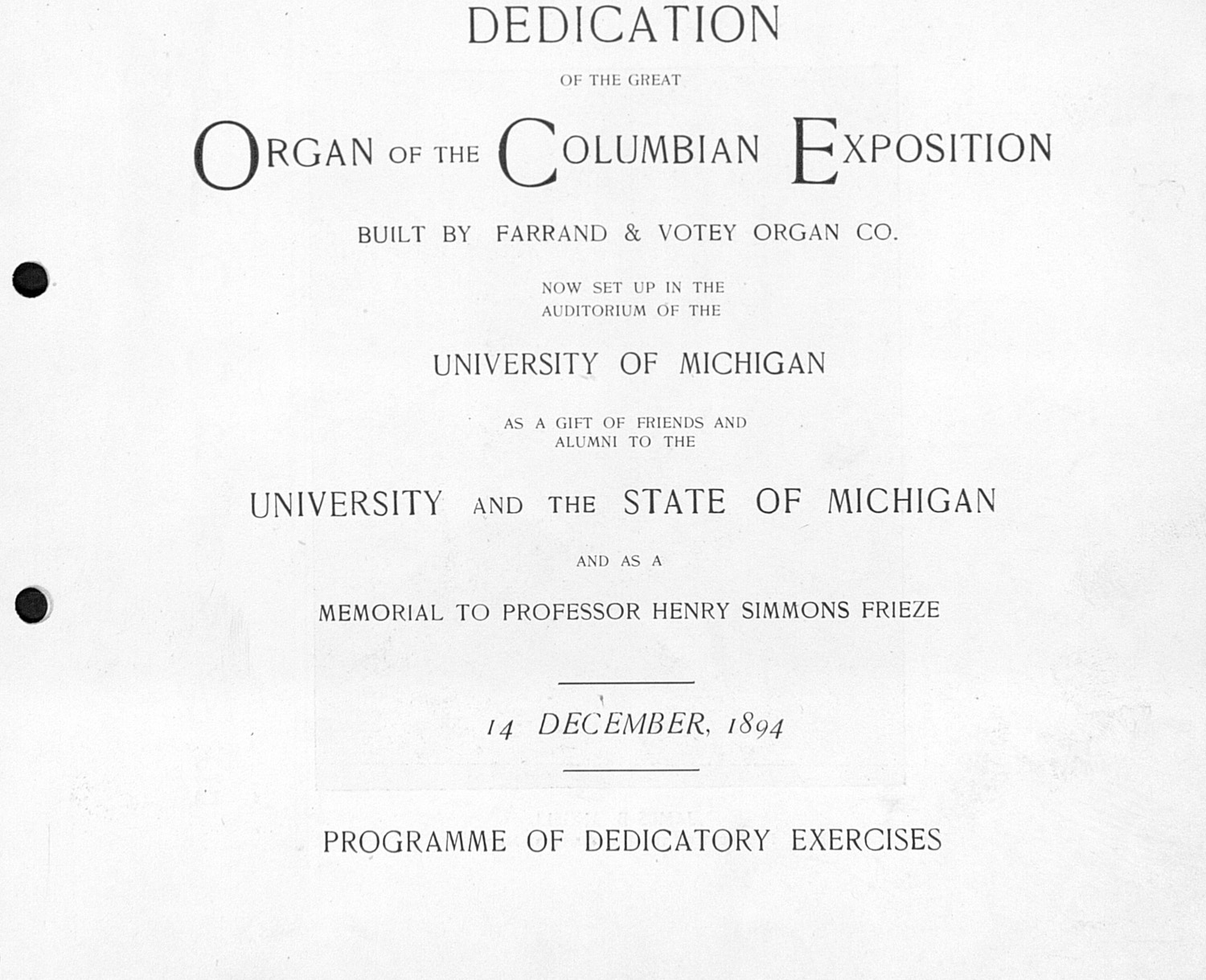 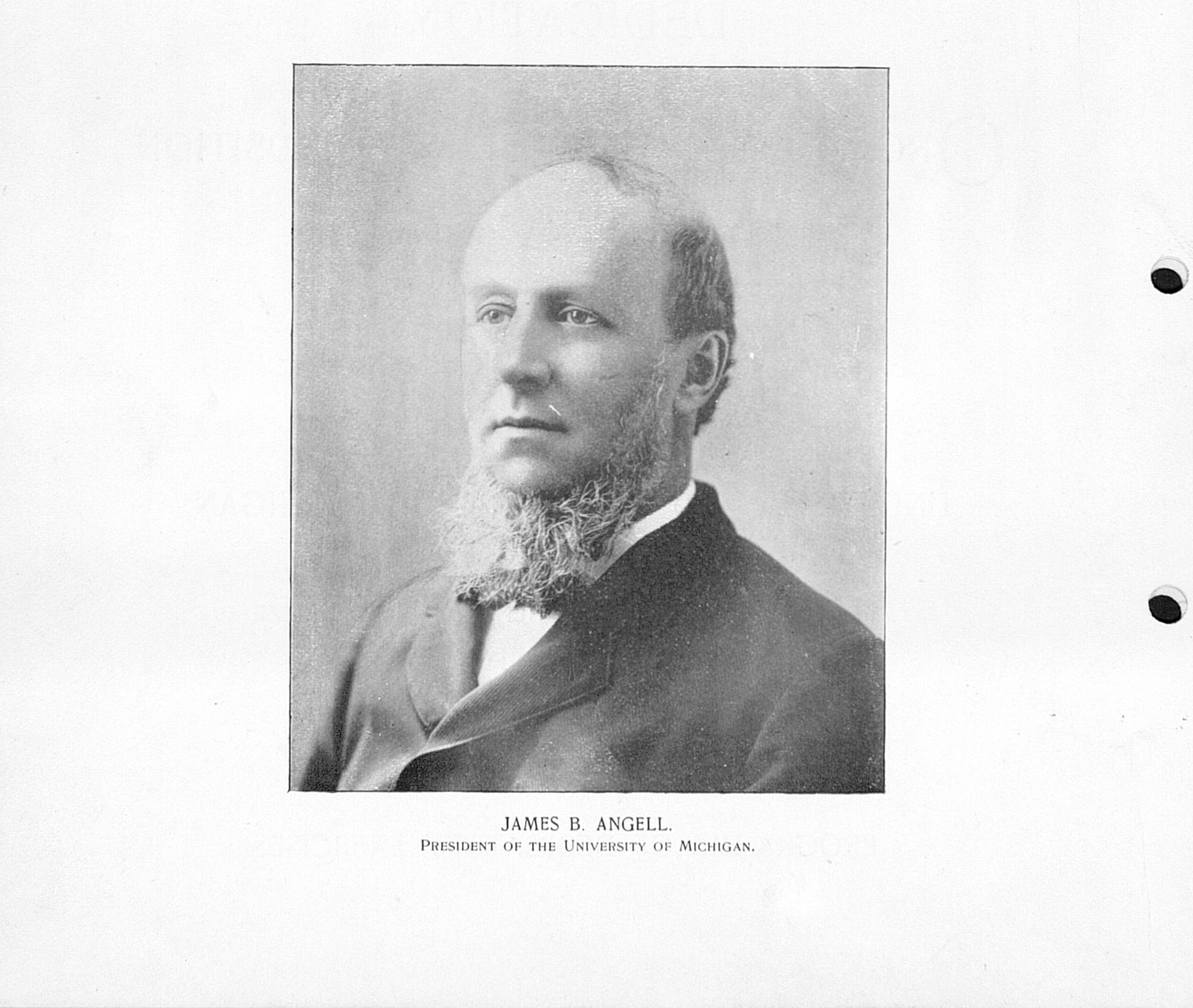 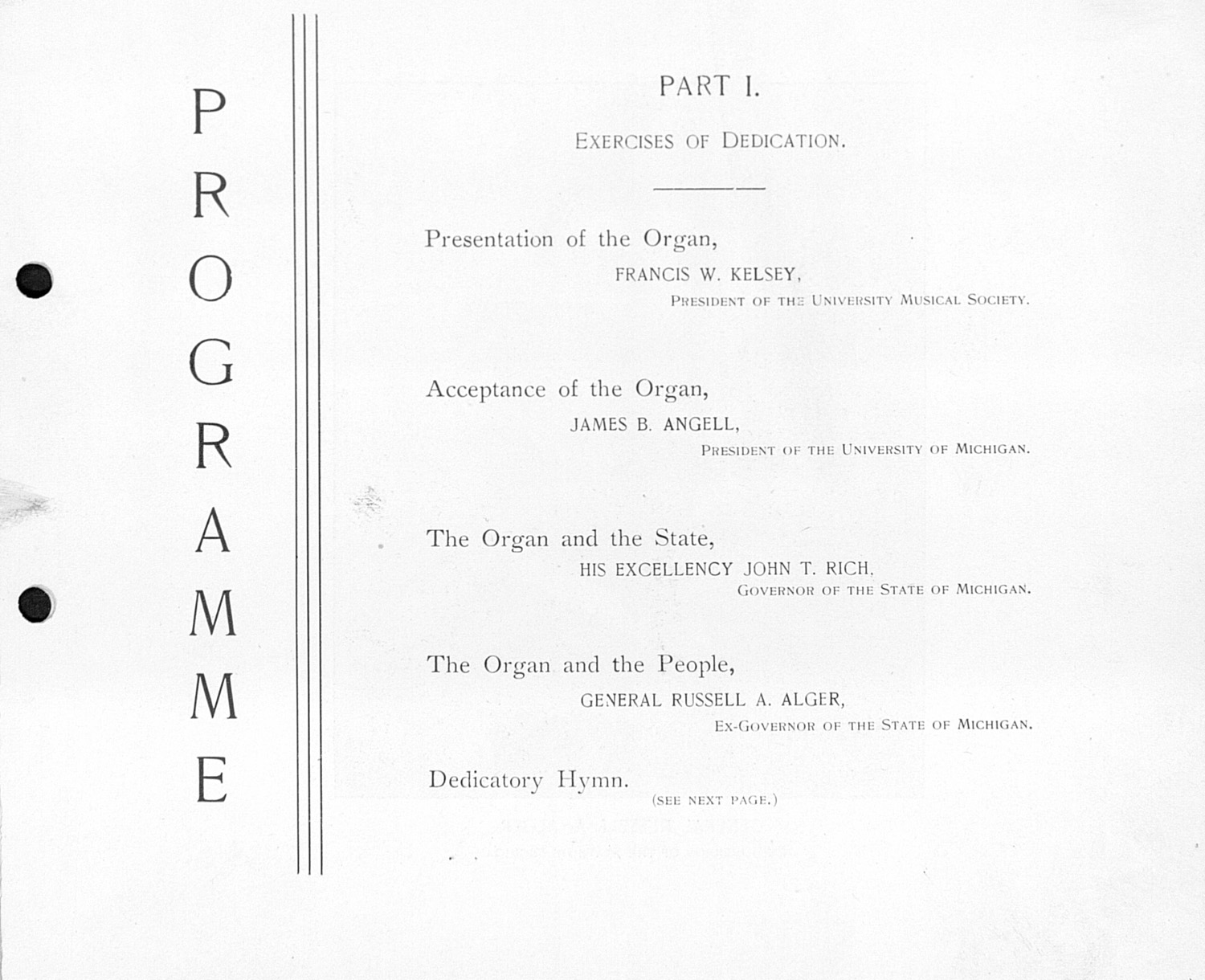 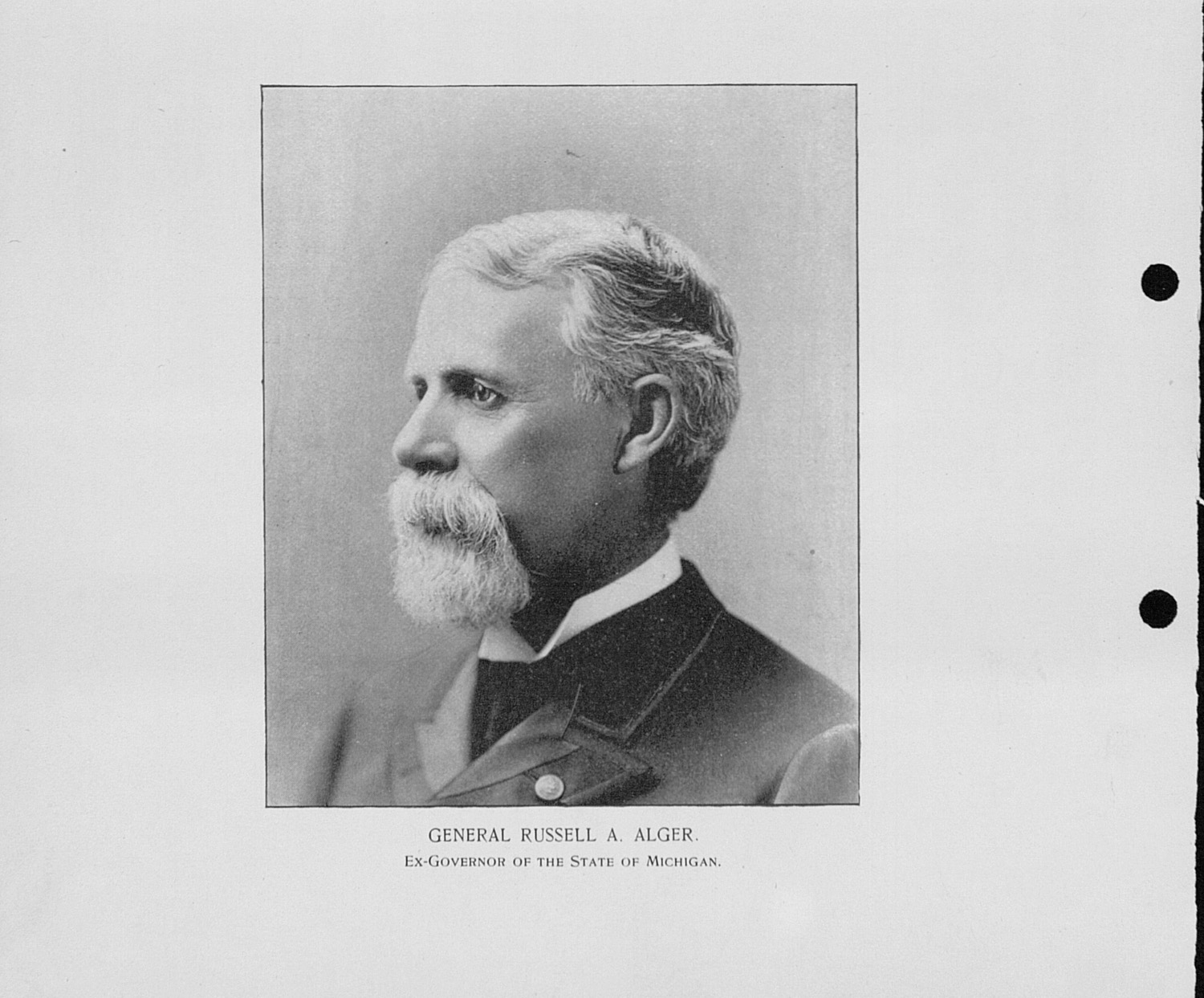 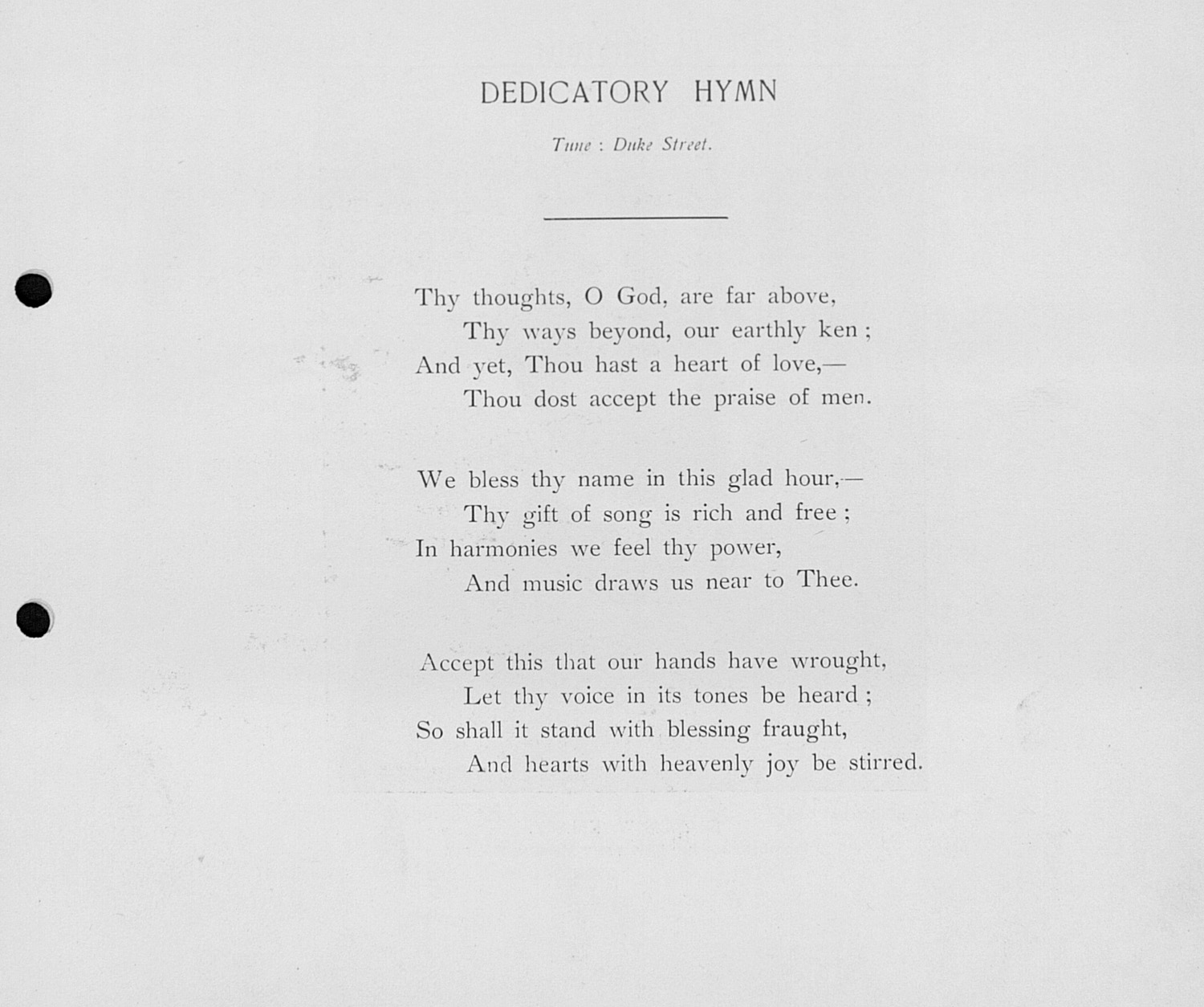 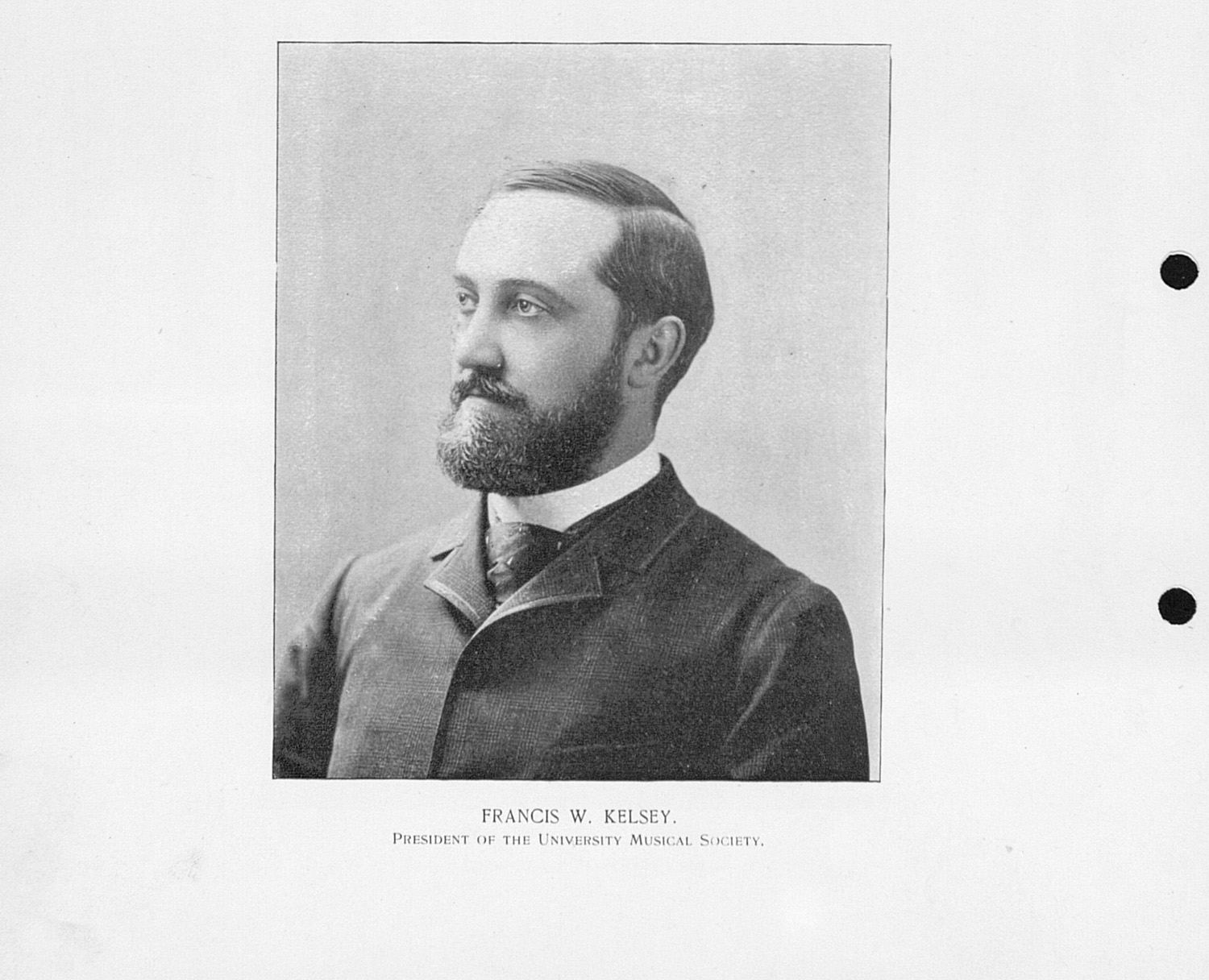 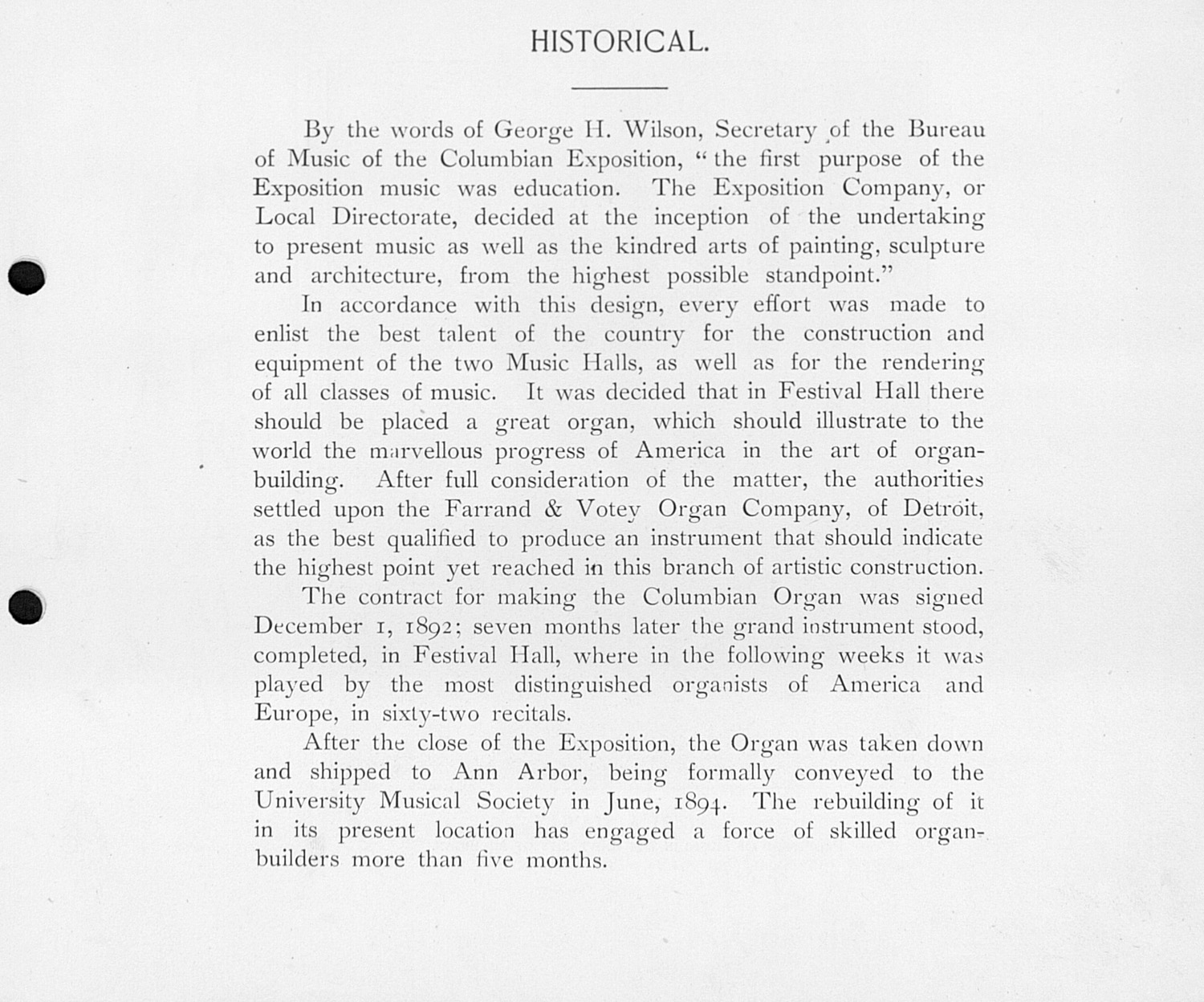 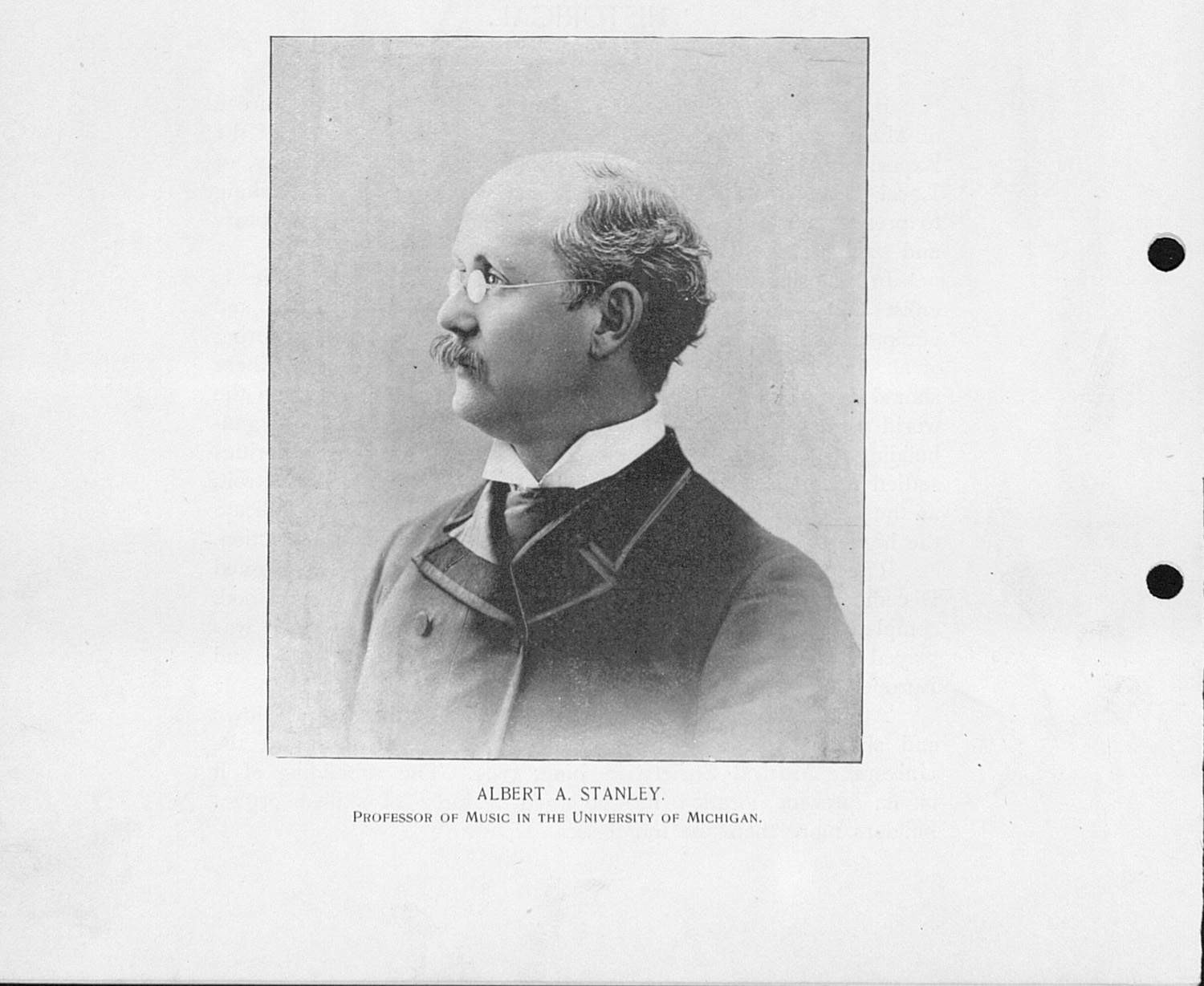 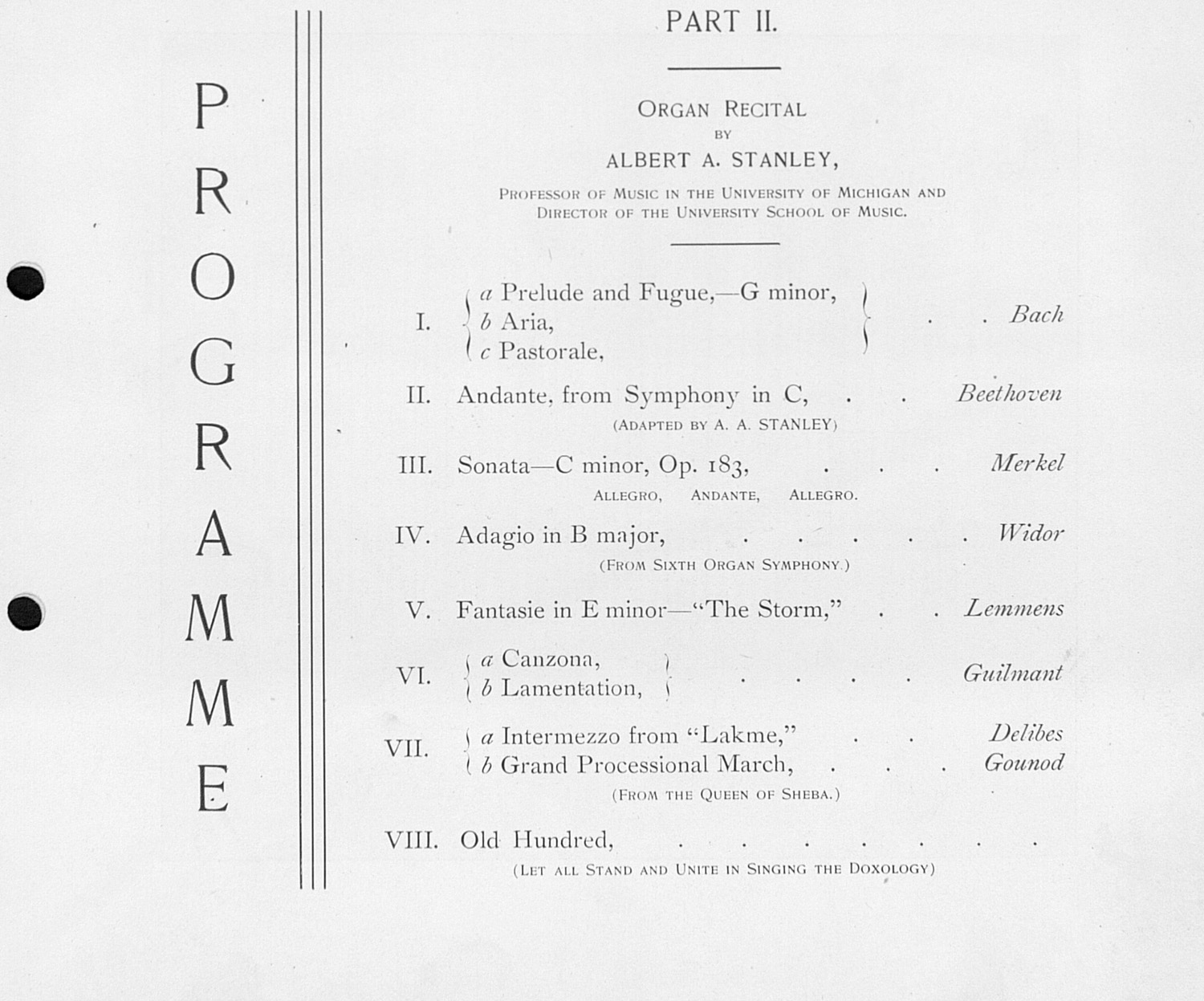 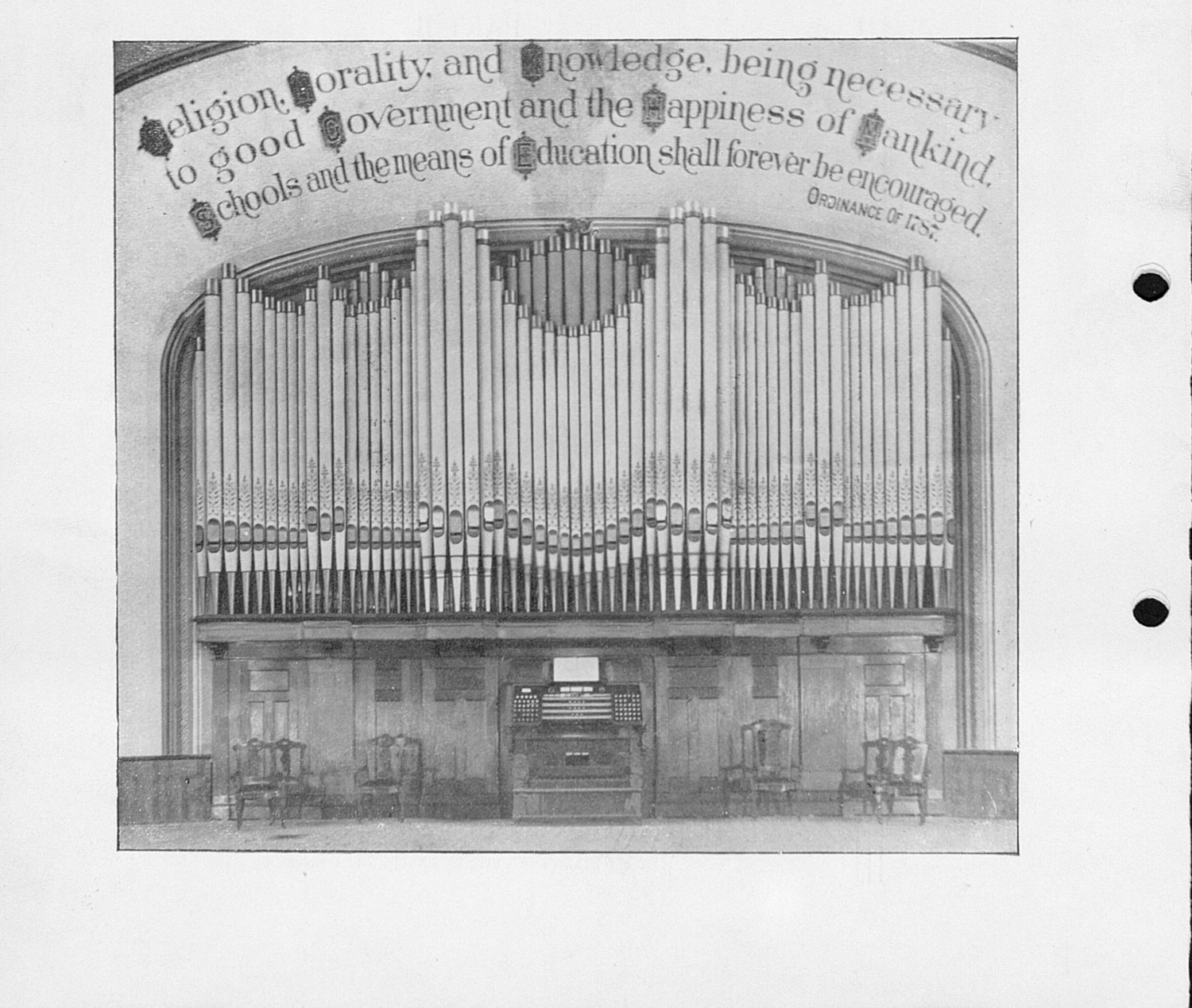 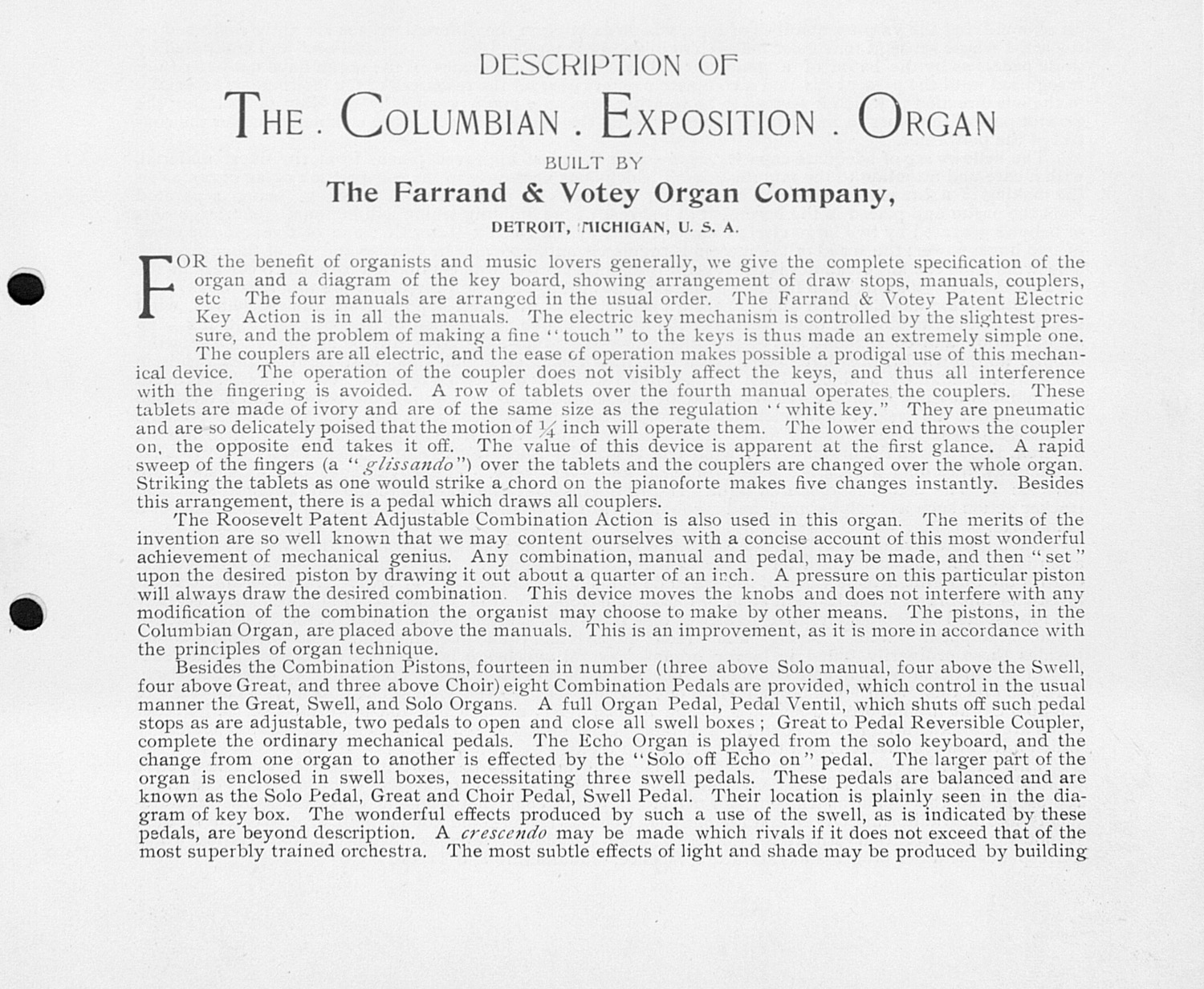 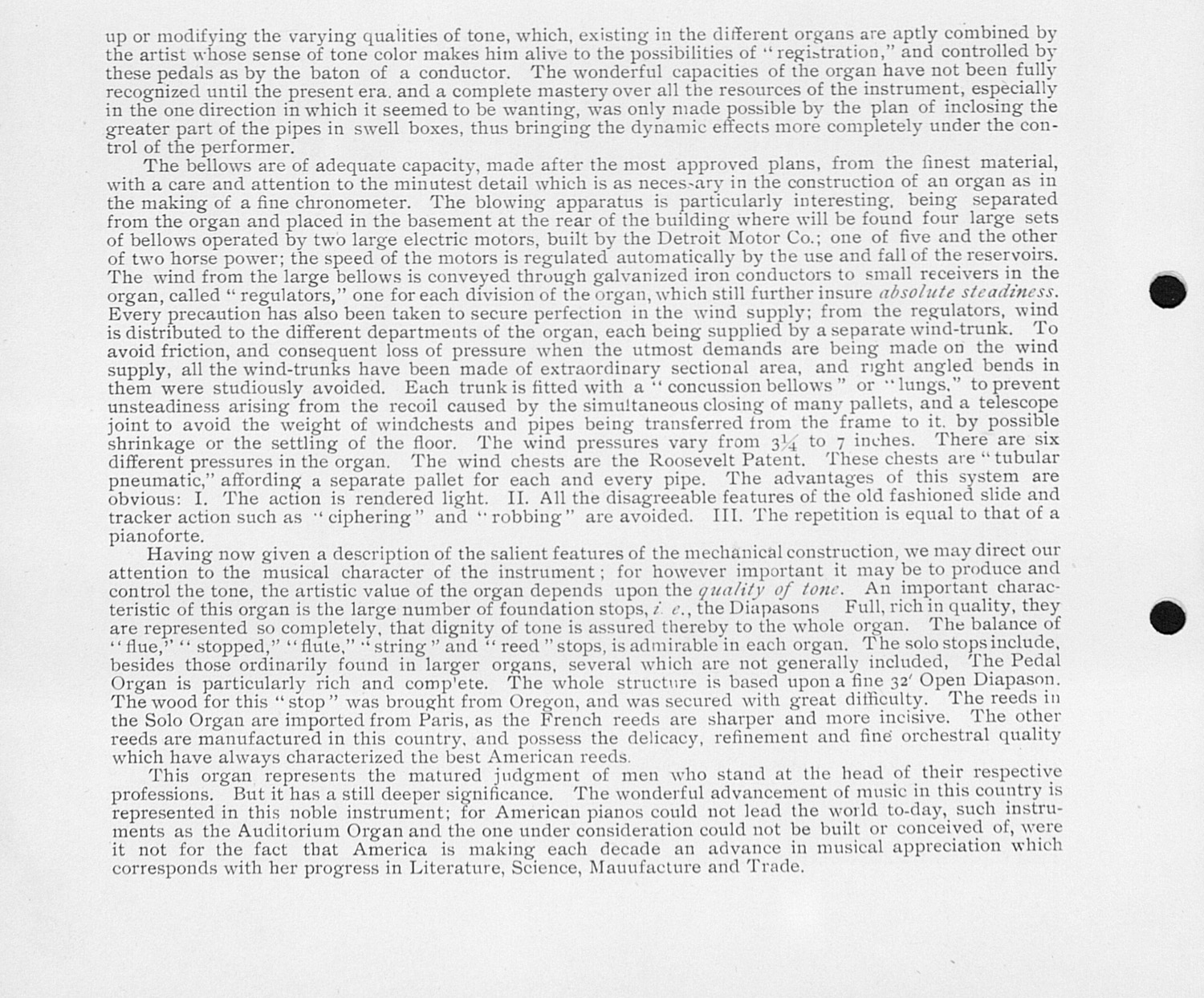 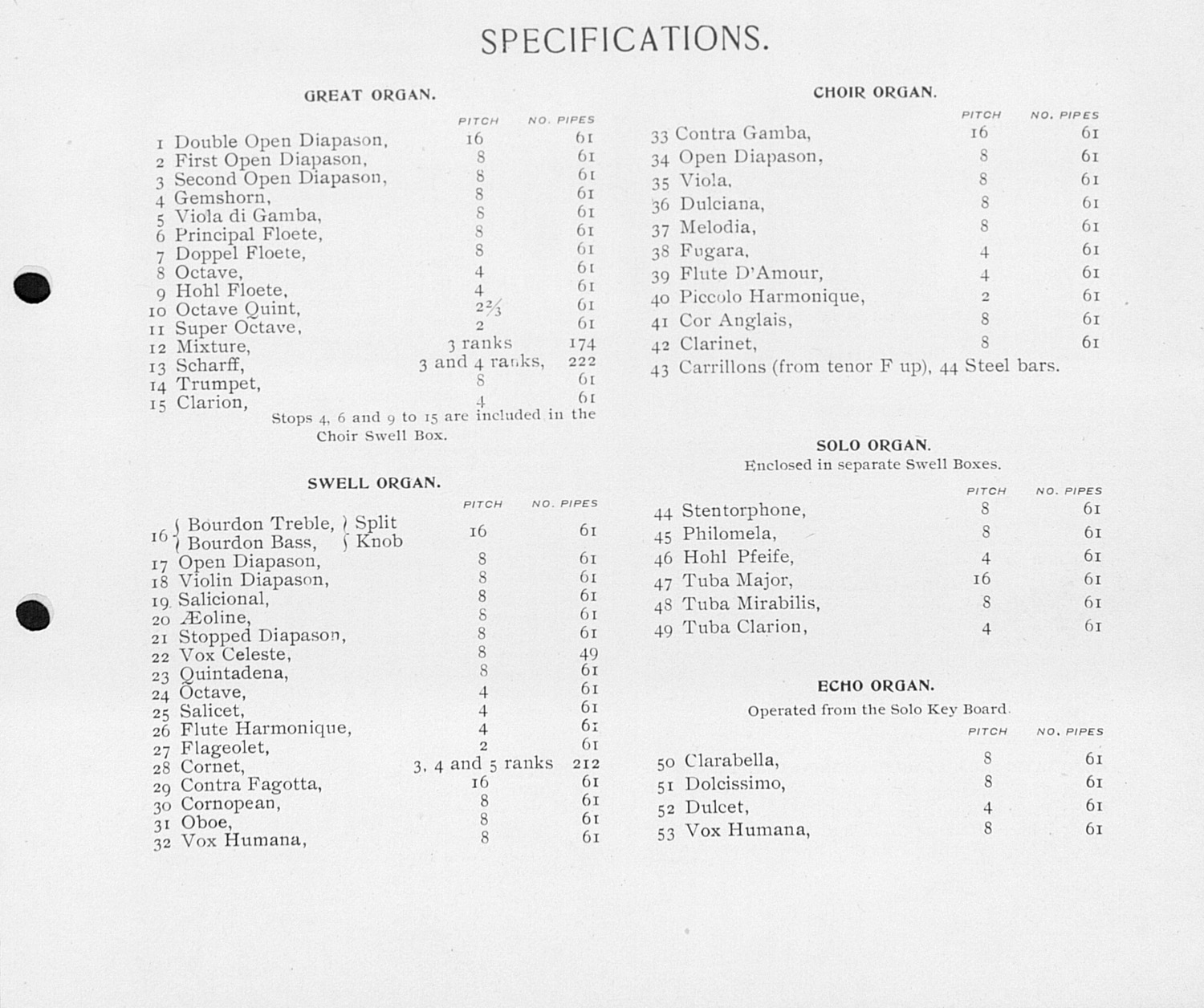 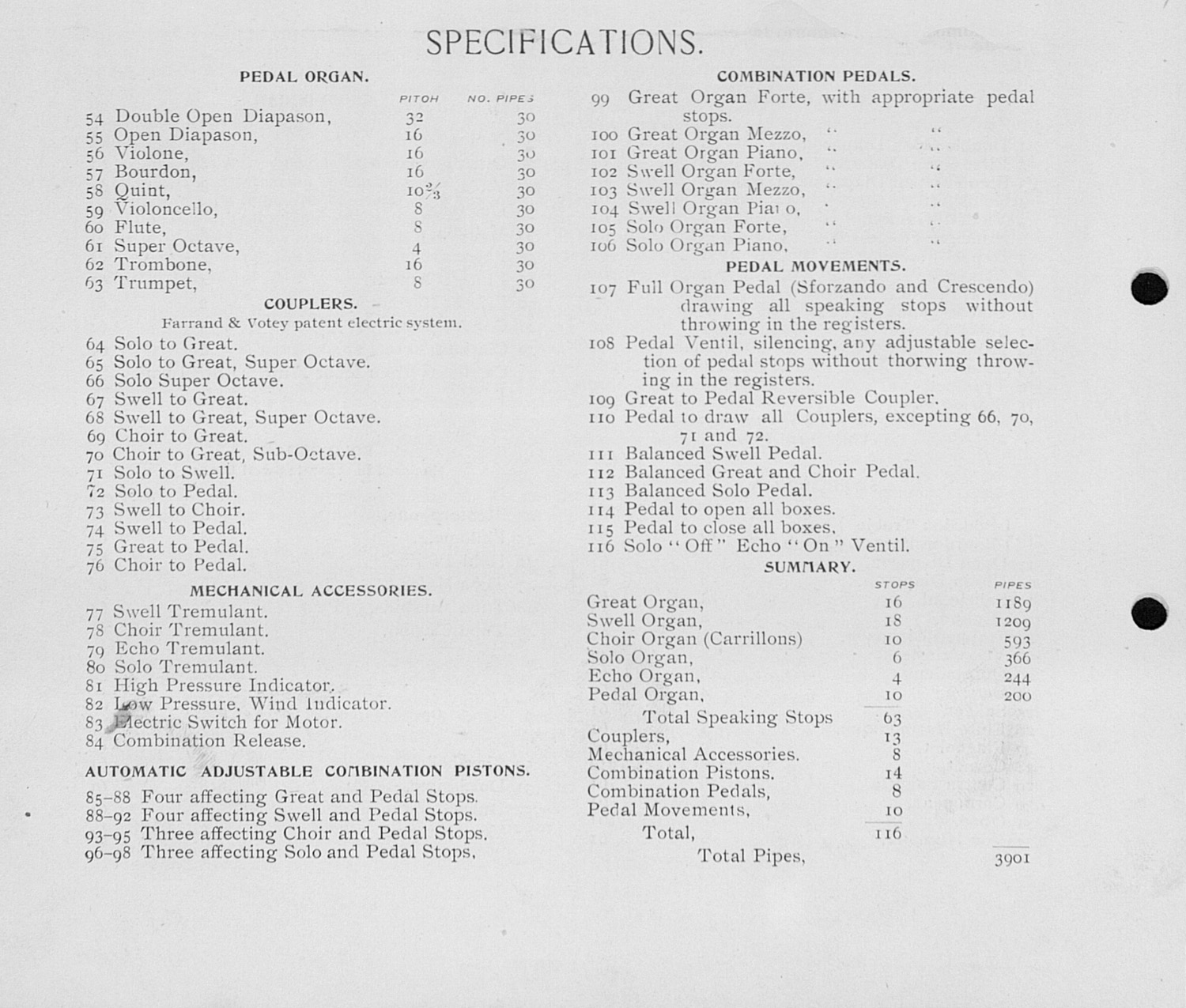 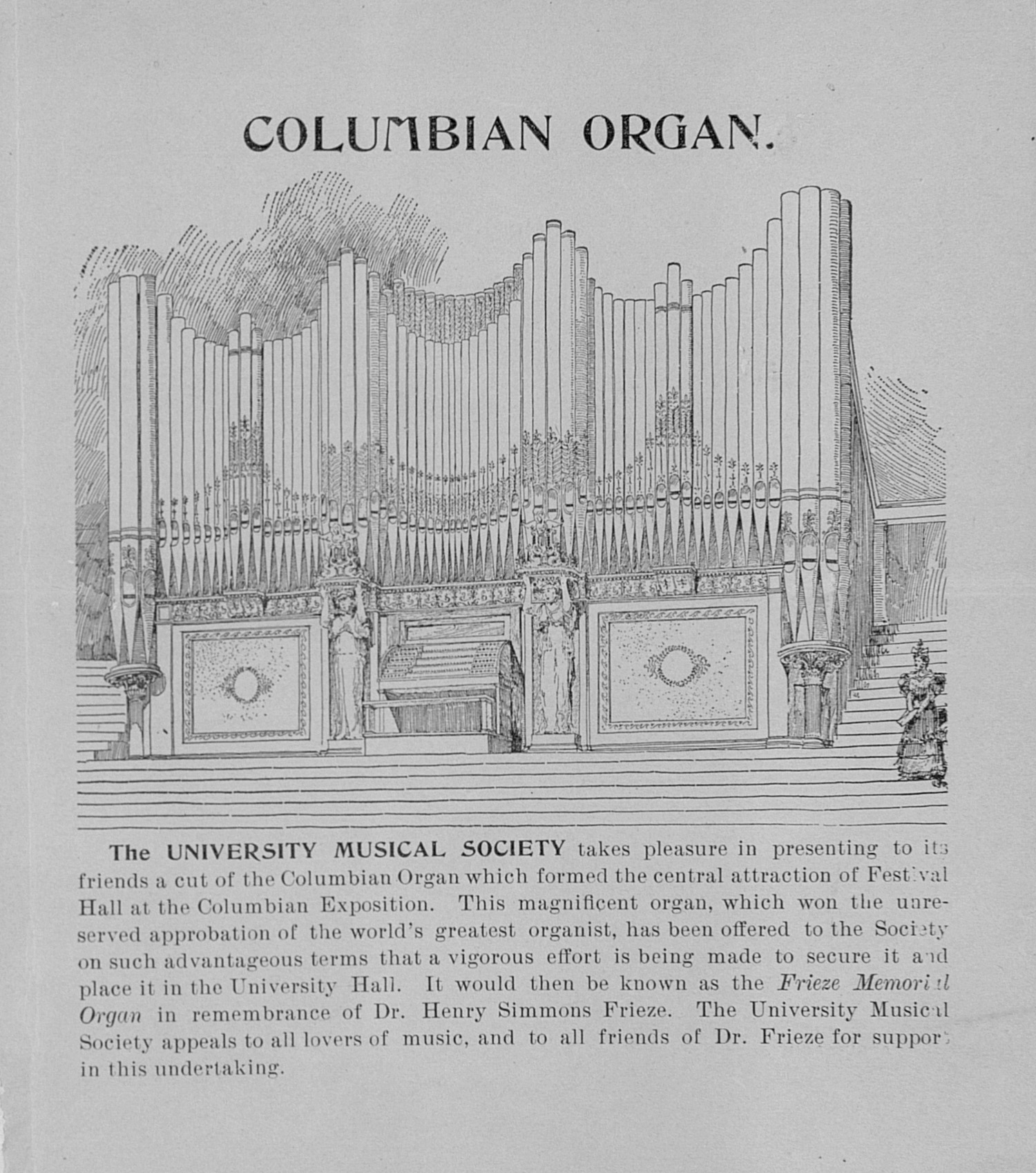 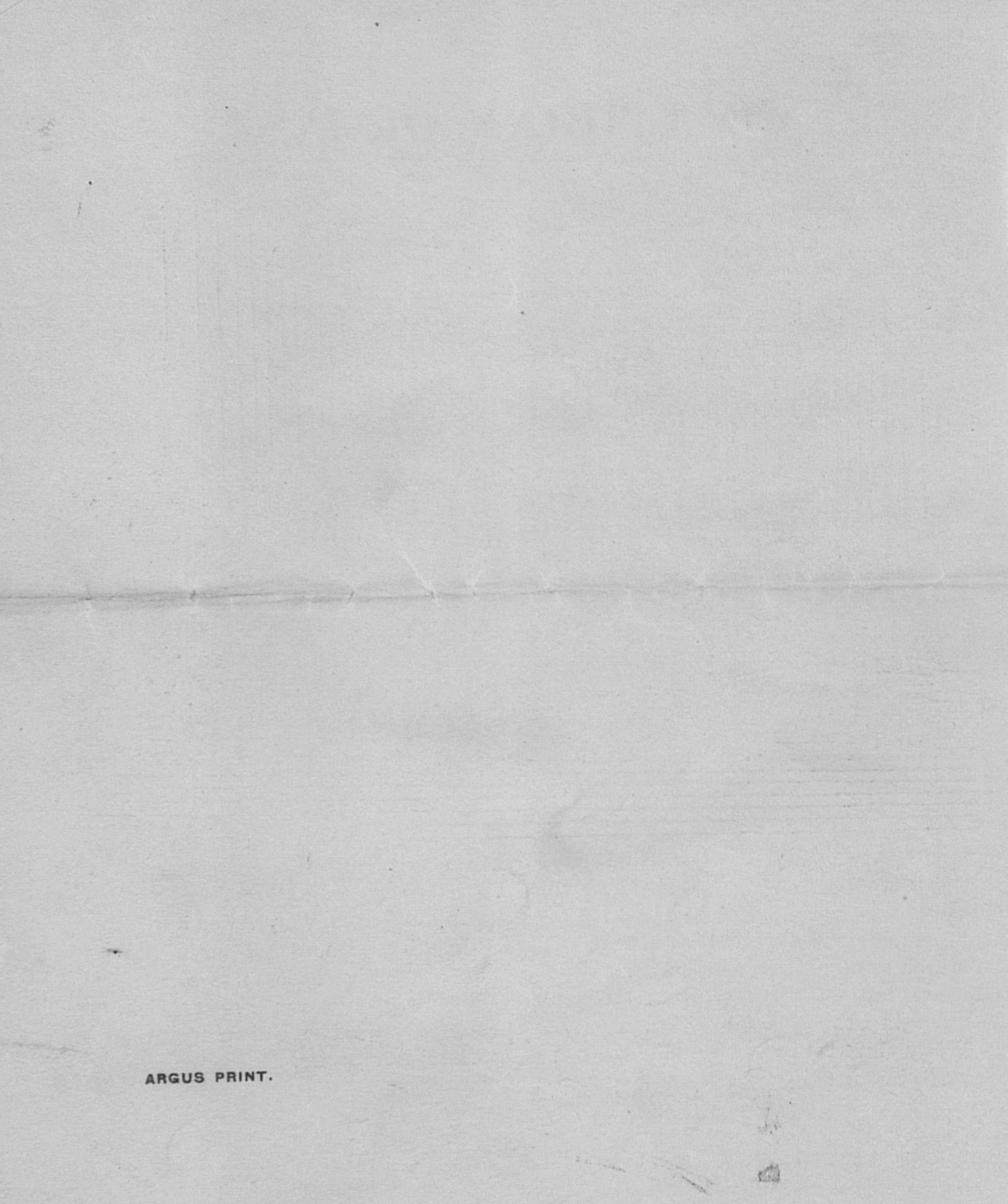 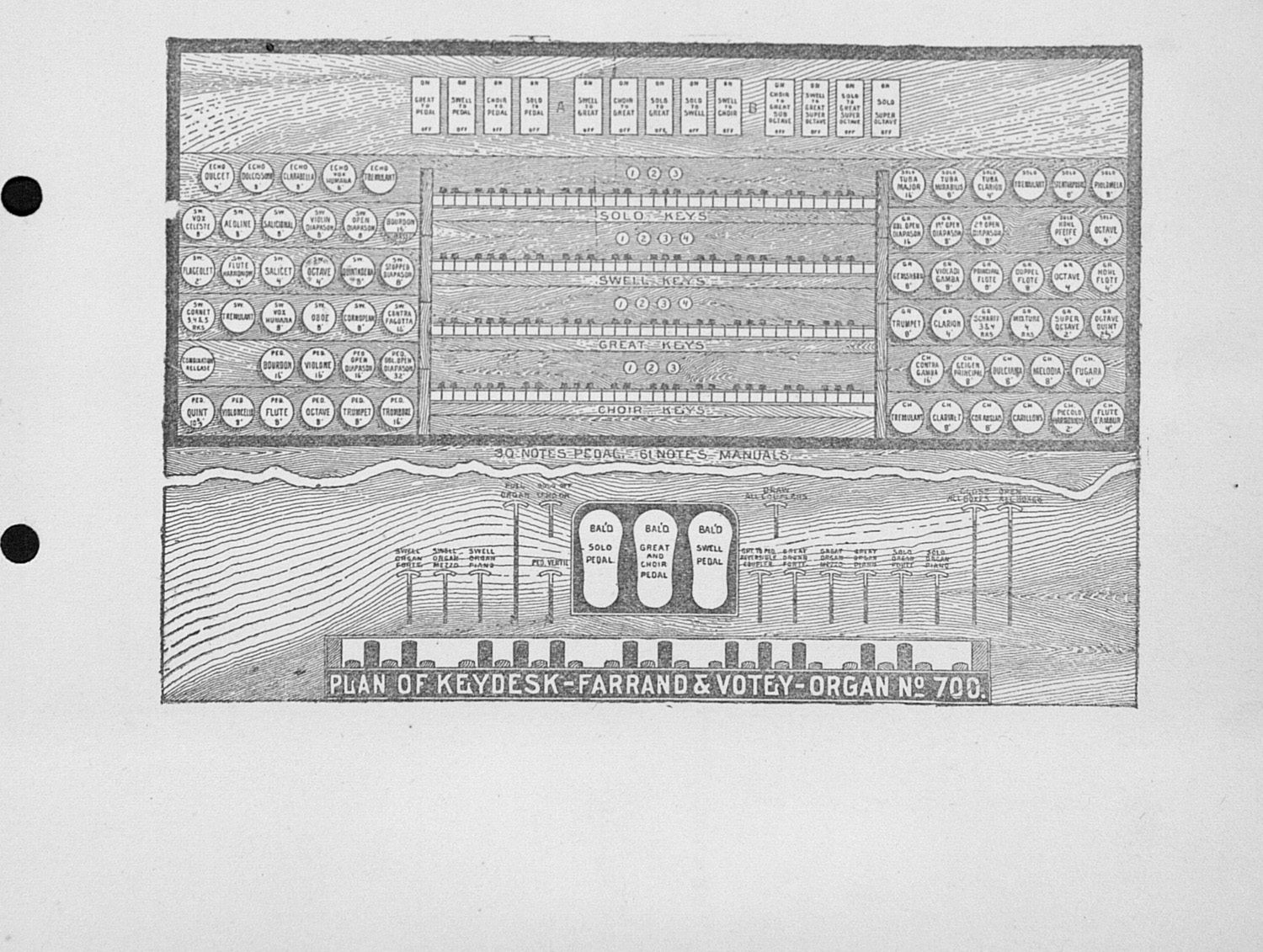 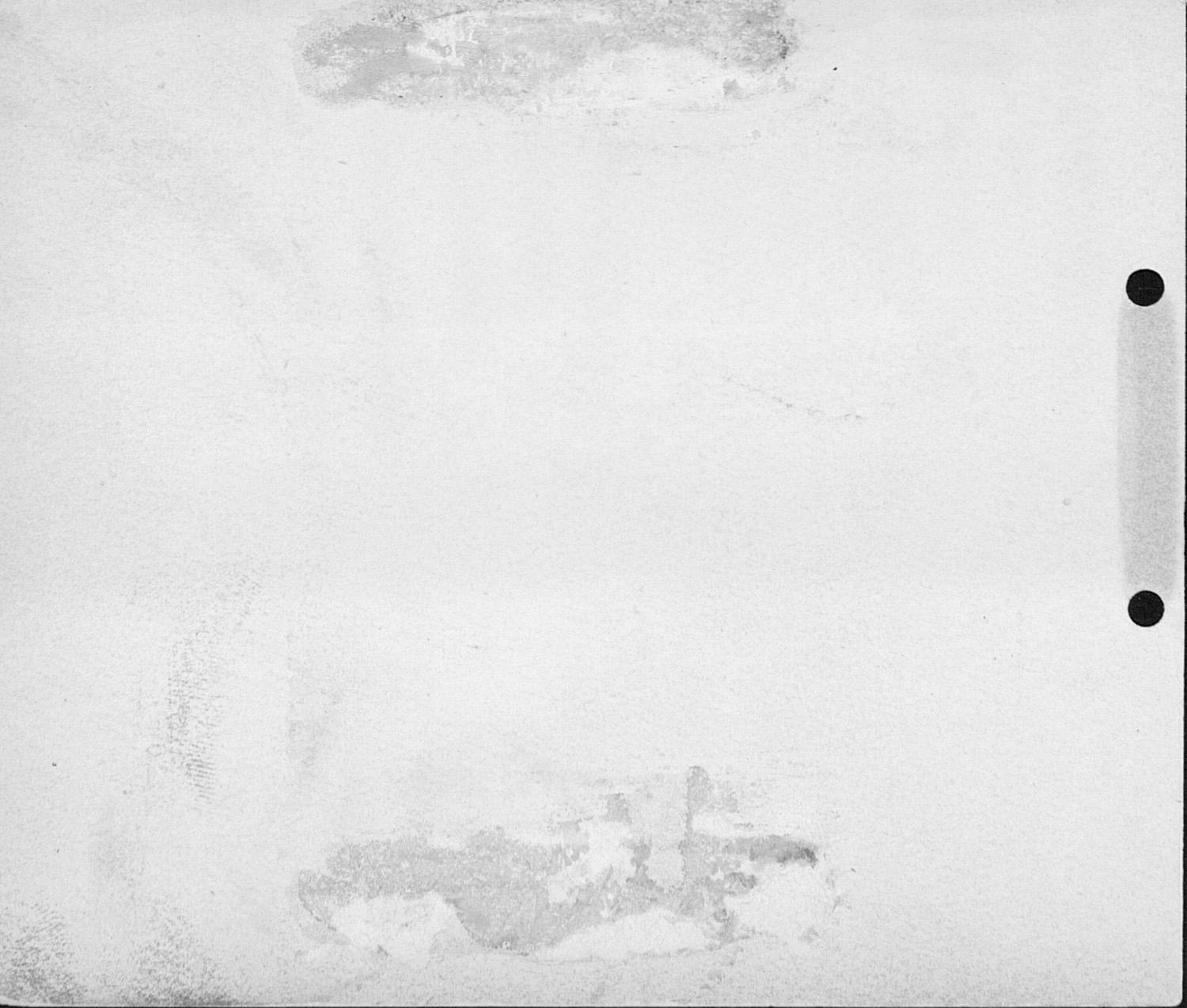 Souvenir
llOiUBd MVWMHOa NHOf
Gibson
HIS EXCELLENCY JOHN T. RICH.
(ioVI-HNOH 1)1THK STATIi IIIMICHIGAN.
DEDICATION
OF THE: CHEAT
Organ of the Qolumbian Exposition
BUILT BY FARRAND & VOTEY ORGAN CO.
NOW SET UP IN THE AUDITORIUM OF THE
UNIVERSITY OF MICHIGAN
AS A GIFT OF FKIENDS AND ALUMNI TO THE
UNIVERSITY and the STATE OF MICHIGAN
AND AS A
MEMORIAL TO PROFESSOR HENRY SIMMONS FRIEZE
14 DECEMBER, 1894
PROGRAMME OF DEDICATORY EXERCISES
JAMES B. ANGELL. Pki-siiiknt oi" thb Univkhsitv op Michigan.
PART I.
Exercises of Dedication.
Presentation of the Organ,
FRANCIS W. KELSEY,
President of th:; I'mvmhsity Musical Society.
Acceptance of the Organ,
JAMES B. ANGELL,
PKESIDENT OF THI-: UNIVERSITY OF MICHIGAN.
The Organ and the State,
HIS EXCELLENCY JOHN T. RICH.
Governor of the State of Michigan.
The Organ and the People,
GENERAL RUSSELL A. ALGER,
EX-(i(IVERNOK OF THE STATE OF MICHIGAN.
Dedicatory I Fvi
(SEE NEXT PAGE.)
GENERAL RUSSELL A. ALGER.
EX-GOVERNOH OF THE STATB I1H MICHIGAN.
DEDICATORY HYMN
Tiuw : Duke Street.
Thy thoughts, O God. are far above, Thy ways beyond, our earthly ken ;
And vet, Thou hast a heart of love,-Thou dost accept the praise of men.
We bless thy name in this glad hour,-Thy gift of song is rich and free :
In harmonies we feel thy power,
And music draws us near to Thee.
Accept this that our hands have wrought, Let thy voice in its tones be heard ;
So shall it stand with blessing fraught,
And hearts with heavenly joy be stirred.
FRANCIS W. KELSEY.
PUI-SlllKNT Ol: Till-: I'NIVl-HSITY MUSICAL SlICIETY.
HISTORICAL.
By the words of George II. Wilson, Secretary of the Bureau of Music of the Columbian Exposition, " the first purpose of the Exposition music was education. The Exposition Company, or Local Directorate, decided at the inception of the undertaking to present music as well as the kindred arts of painting, sculpture and architecture, from the highest possible standpoint."
In accordance with this design, every effort was made to enlist the best talent of the country for the construction and equipment of the two Music Halls, as well as for the rendering of all classes of music. It was decided that in Festival Hall there should be placed a great organ, which should illustrate to the world the marvellous progress of America in the art of organ-building. After full consideration of the matter, the authorities settled upon the Farrand & Votey Organ Company, of Detroit, as the best qualified to produce an instrument that should indicate the highest point yet reached in this branch of artistic construction.
The contract for making the Columbian Organ was signed December i, 1892; seven months later the grand instrument stood, completed, in Festival Hall, where in the following weeks it was played by the most distinguished organists of America and Europe, in sixty-two recitals.
After the close of the Exposition, the Organ was taken down and shipped to Ann Arbor, being formally conveyed to the University Musical Society in June, 1894. The rebuilding of it in its present location has engaged a force of skilled organ-builders more than live months.
ALBERT A. STANLEY. Professor ov Music in the University of Michigan.
PART II.
Organ Recital
ALBERT A. STANLEY,
Professor of Music in the Usiveusity of Michigan and Director of the University School of Music.
, ( Prelude and Fugue,--G minor, )
I. b Aria, j( c Pastorale, '
II. Andante, from Symphony in C,
(Adapted by A. A. STANLEY)
III. Sonata--C minor, Op. 183,
Allegro, Andante, Allegro.
IV. Adagio in B major, . . .
(From Sixth Organ Symphony.)
V. Fantasie in E minor--"The Storm,"
VI.
a Canzonn, )
b Lamentation,
tttt a Intermezzo from "Lakme," ( ; Grand Processional March,
(From the Queen of Sheba.)
VIII. Old Hundred,.....
(Let all Stand and Unite in Singing the Doxology)
. Bach
Beethoven
Merkel Widor
Lemmens
Guilmant
Dclibcs Gounod
aUtv and fiedgo.

COLUflBIAN ORGAN.
The UNIVERSITY MUSICAL SOCIETY lakes pleasure in presenting to it:j fricmls a cut of the Columbian Organ which formed the central attraction of Fesf.val Hall at the Columbian Exposition. This magnificent organ, which won tlie unreserved approbation of the world's greatest organist, has been offered to the Society on such advantageous terms that a vigorous effort is being made to secure it a id place it in the University Hall. It would then be known as the Frieze Memori il Organ in remembrance of Dr. Henry Simmons Frieze. The University Music il Society appeals to all lovers of music, and to all friends of Dr. Frieze for suppor in Ibis undertaking.
ARGUS PRINT.
PLAN 0F K&YDESK-FARRAND & VOT&Y-ORGAN N2 70'
gc, b,n bk,