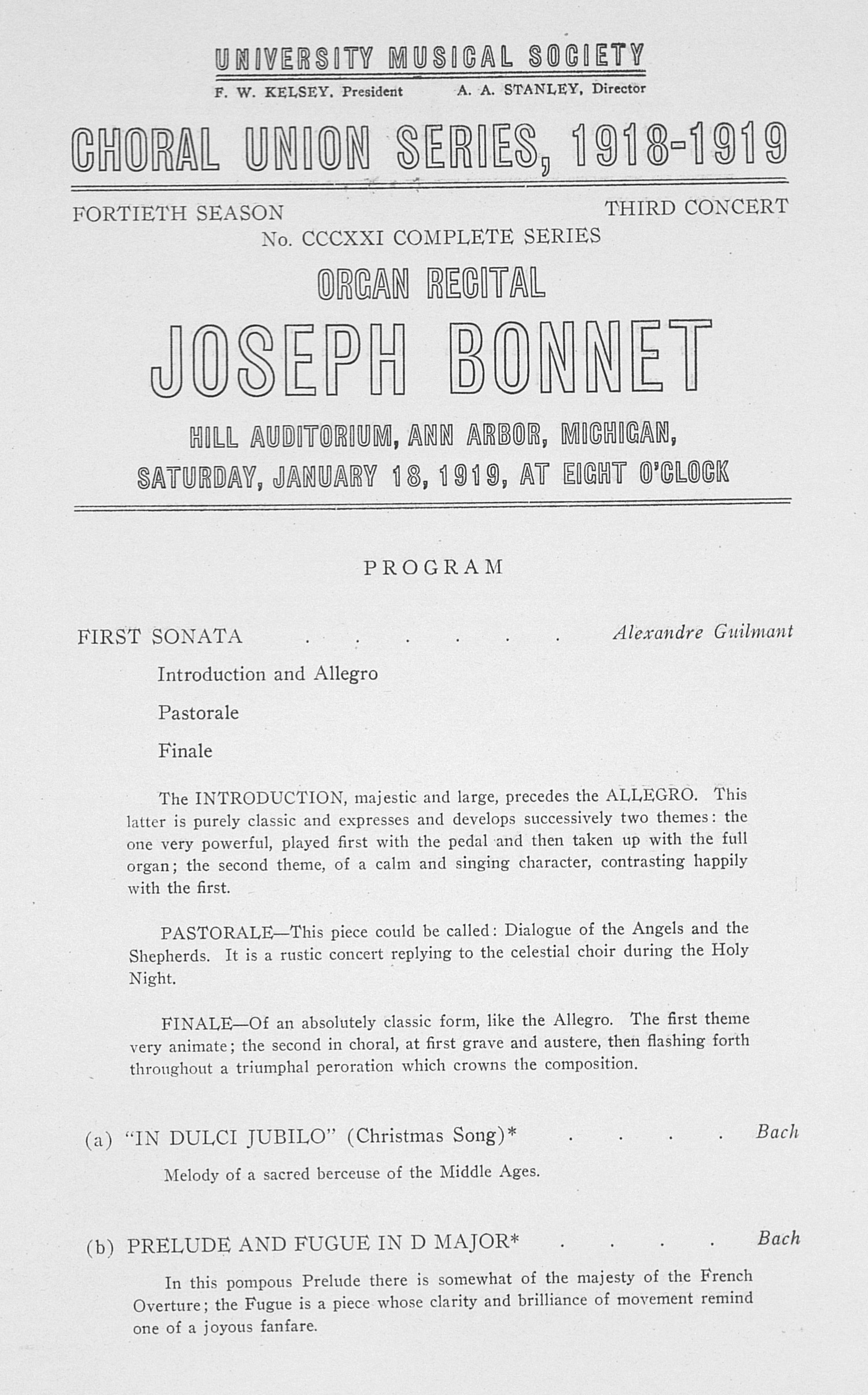 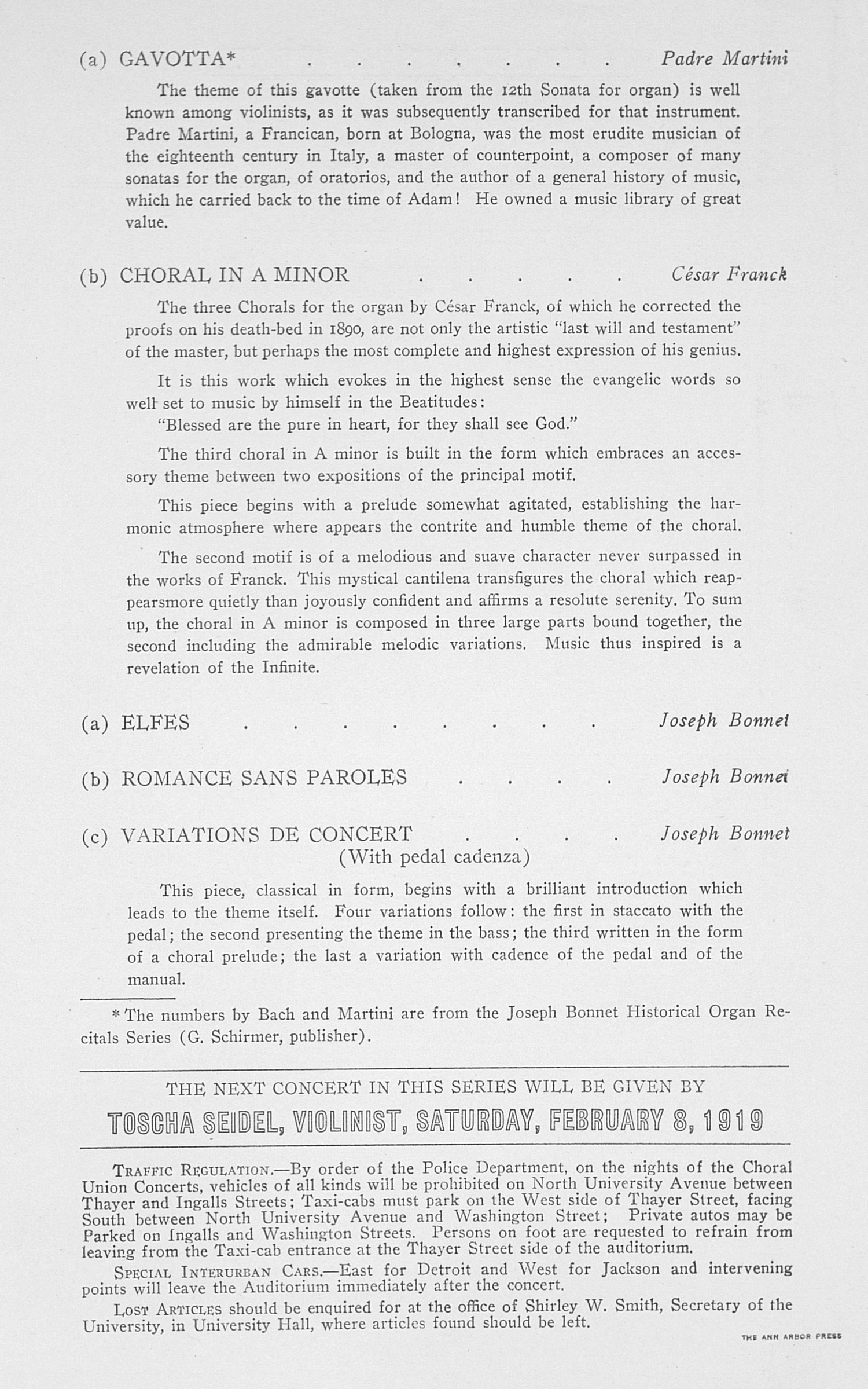 F. W. KELSEY. President A. A. STANLEY. Director
FORTIETH SEASON THIRD CONCERT
No. CCCXXI COMPLETE SERIES
PROGRAM
Alexandre Guilmant
FIRST SONATA
Introduction and Allegro
Pastorale
Finale
The INTRODUCTION, majestic and large, precedes the ALLEGRO. This latter is purely classic and expresses and develops successively two themes: the one very powerful, played first with the pedal and then taken up with the full organ; the second theme, of a calm and singing character, contrasting happily with the first.
PASTORALE--This piece could be called: Dialogue of the Angels and the Shepherds. It is a rustic concert replying to the celestial choir during the Holy Night.
FINALE--Of an absolutely classic form, like the Allegro. The first theme very animate; the second in choral, at first grave and austere, then flashing forth throughout a triumphal peroration which crowns the composition.
(a) "IN DULCI JUBILO" (Christmas Song)
Melody of a sacred berceuse of the Middle Ages.
Bach
(b) PRELUDE AND FUGUE IN D MAJOR .... Bach
In this pompous Prelude there is somewhat of the majesty of the French Overture; the Fugue is a piece whose clarity and brilliance of movement remind one of a joyous fanfare.
(a) GAVOTTA .......Padre Martini
The theme of this gavotte (taken from the 12th Sonata for organ) is well known among violinists, as it was subsequently transcribed for that instrument. Padre Martini, a Francican, born at Bologna, was the most erudite musician of the eighteenth century in Italy, a master of counterpoint, a composer of many sonatas for the organ, of oratorios, and the author of a general history of music, which he carried back to the time of Adam! He owned a music library of great value.
(b) CHORAL IN A MINOR .....Cesar Franck
The three Chorals for the organ by Cesar Franck, of which he corrected the proofs on his death-bed in 1890, are not only the artistic "last will and testament" of the master, but perhaps the most complete and highest expression of his genius.
It is this work which evokes in the highest sense the evangelic words so weir set to music by himself in the Beatitudes:
"Blessed are the pure in heart, for they shall see God."
The third choral in A minor is built in the form which embraces an accessory theme between two expositions of the principal motif.
This piece begins with a prelude somewhat agitated, establishing the harmonic atmosphere where appears the contrite and humble theme of the choral.
The second motif is of a melodious and suave character never surpassed in the works of Franck. This mystical cantilena transfigures the choral which reappearsmore quietly than joyously confident and affirms a resolute serenity. To sum up, the choral in A minor is composed in three large parts bound together, the second including the admirable melodic variations. Music thus inspired is a revelation of the Infinite.
(a) ELFES........Joseph Bonnet
(b) ROMANCE SANS PAROLES .... Joseph Bonnei
(c) VARIATIONS DE CONCERT .... Joseph Bonnet
(With pedal cadenza)
This piece, classical in form, begins with a brilliant introduction which leads to the theme itself. Four variations follow: the first in staccato with the pedal; the second presenting the theme in the bass; the third written in the form of a choral prelude; the last a variation with cadence of the pedal and of the manual.
The numbers by Bach and Martini are from the Joseph Bonnet Historical Organ Recitals Series (G. Schirmer, publisher).
THE NEXT CONCERT IN THIS SERIES WILL BE GIVEN BY
Traffic Regulation.--By order of the Police Department, on the nights of the Choral Union Concerts, vehicles of all kinds will be prohibited on North University Avenue between Thayer and Ingalls Streets; Taxi-cabs must park on the West side of Thayer Street, facing South between North University Avenue and Washington Street; Private autos may be Parked on Ingalls and Washington Streets. Persons on foot are requested to refrain from leaving from the Taxi-cab entrance at the Thayer Street side of the auditorium.
Special Interurban Cars.--East for Detroit and West for Jackson and intervening points will leave the Auditorium immediately after the concert.
Lost Articles should be enquired for at the office of Shirley W. Smith, Secretary of the University, in University Hall, where articles found should be left.
TKS AKH ARBOft PRUI