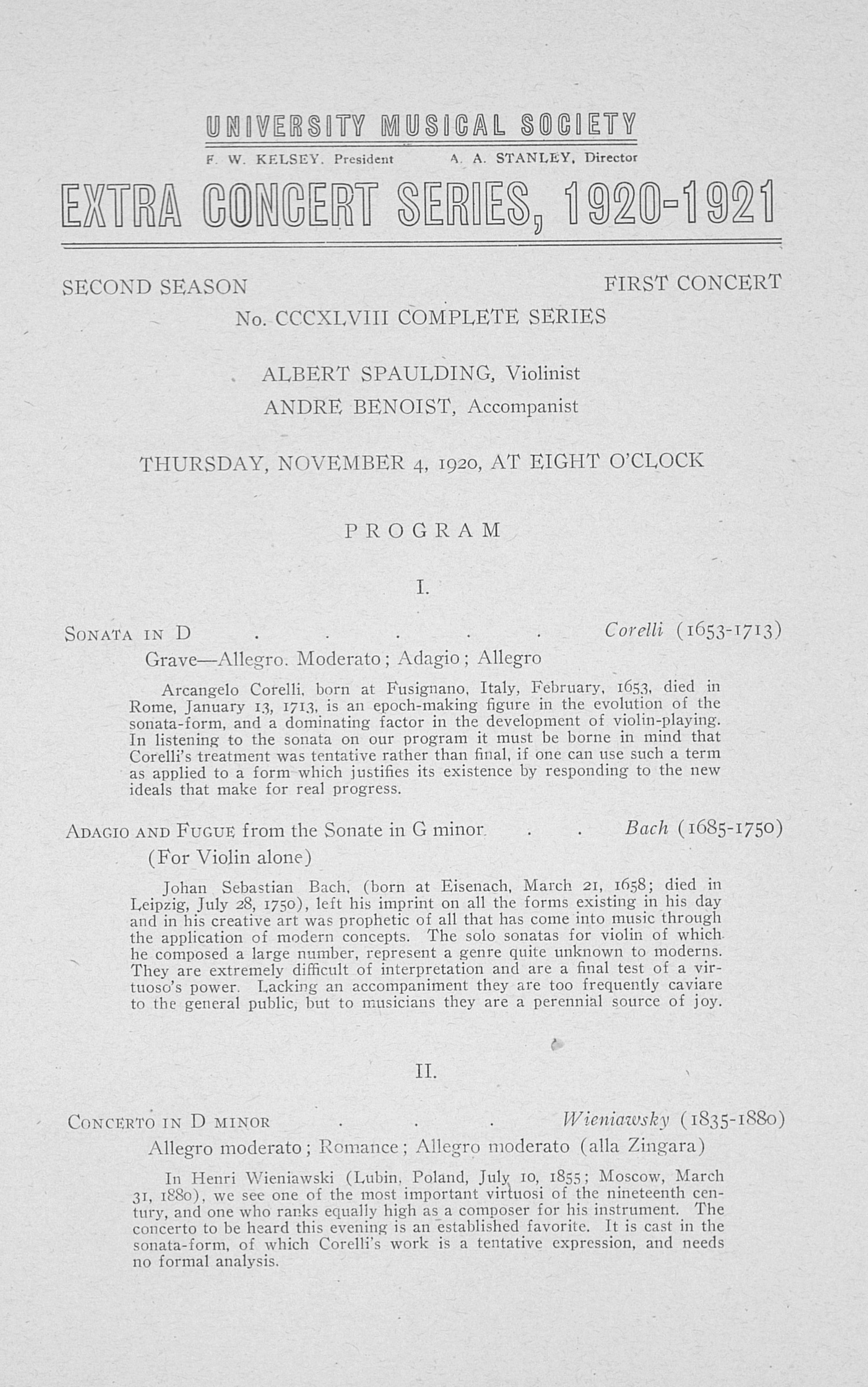 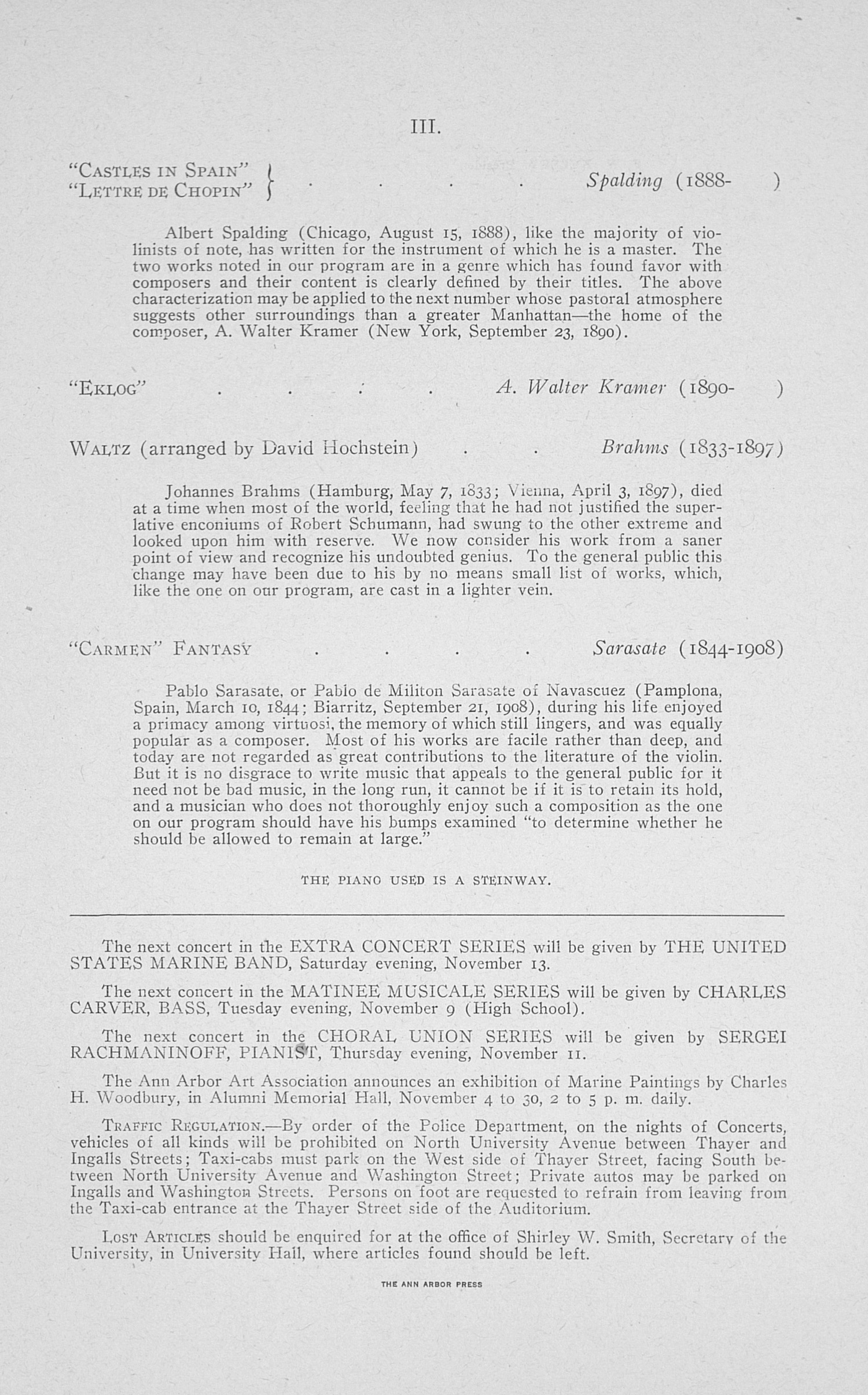 ?1SDTY 11:
F. W. KELSEV. President
V A. STANLEY. Director
SECOND SEASON FIRST CONCERT
No. CCCXLVIII COMPLETE SERIES
. ALBERT SPAULDING, Violinist ANDRE BENOIST, Accompanist
THURSDAY, NOVEMBER 4, 1920, AT EIGHT O'CLOCK PROGRAM
I.
Sonata in D
Grave--Allegro. Moderato ; Adagio ; Allegro
Corelli (1653-1713)
Arcangelo Corelli, born at Pusignano, Italy, February, 1653, died in Rome, January 13, 1713, is an epoch-making figure in the evolution of the sonata-form, and a dominating factor in the development of violin-playing. In listening to the sonata on our program it must be borne in mind that Corelli's treatment was tentative rather than final, if one can use such a term as applied to a form which justifies its existence by responding to the new ideals that make for real progress.
Adagio and Fugue from the Sonate in G minor. (For Violin alone)
Bach (1685-1750)
Johan Sebastian Bach, (born at Eisenach, March 21, 1(158; died in Leipzig, July 28, 1750), left his imprint on all the forms existing in his day and in his creative art was prophetic of all that has come into music through the application of modern concepts. The solo sonatas for violin of which, he composed a large number, represent a genre quite unknown to moderns. They are extremely difficult of interpretation and are a final test of a virtuoso's power. Lacking an accompaniment they are too frequently caviare to the general public, but to musicians they are a perennial source of joy.
(??
II.
Concerto in D minor . . . Wieniaivsky (1835-1S80)
Allegro moderato; Romance; Allegro moderato (alia Zingara)
In Henri Wieniawski (Lubin. Poland, July 10, 1855; Moscow, March 31, 1880), we see one of the most important virtuosi of the nineteenth century, and one who ranks equally high as a composer for his instrument. The concerto to be heard this evening is an established favorite. It is cast in the sonata-form, of which Corelli's work is a tentative expression, and needs no formal analysis.
III.
"Castles in Spain" I tnij;n
"Lsttrbde Chopin" } ? ? Spaldmg
Albert Spalding (Chicago, August IS, 1888), like the majority of violinists of note, has written for the instrument of which he is a master. The two works noted in our program are in a genre which has found favor with composers and their content is clearly denned by their titles. The above characterization may be applied to the next number whose pastoral atmosphere suggests other surroundings than a greater Manhattan--the home of the composer, A. Walter Kramer (New York, September 23, 1890).
"Ekxog" A. Walter Kramer (1890)
Waltz (arranged by David llochstein) . . Brahms (1833-1897)
Johannes Brahms (Hamburg, May 7, 1833; Vienna, April 3, 1897), died at a time when most of the world, feeling that he had not justified the superlative enconiums of Robert Schumann, had swung to the other extreme and looked upon him with reserve. We now consider his work from a saner point of view and recognize his undoubted genius. To the general public this change may have been due to his by no means small list of works, which, like the one on our program, are cast in a lighter vein.
"Carmen" Fantasy .... Saras ate (1844-1908)
Pablo Sarasate, or Pabio de Militon Sarasate of Navascuez (Pamplona, Spain, March 10, 1844; Biarritz, September 21, 1908), during his life enjoyed a primacy among virtuosi, the memory of which still lingers, and was equally popular as a composer. Most of his works are facile rather than deep, and today are not regarded as great contributions to the literature of the violin. But it is no disgrace to write music that appeals to the general public for it need not be bad music, in the long run, it cannot be if it is to retain its hold, and a musician who does not thoroughly enjoy such a composition as the one on our program should have his bumps examined "to determine whether he should be allowed to remain at large."
THE PIANO USED IS A STEINWAY.
The next concert in the EXTRA CONCERT SERIES will be given by THE UNITED STATES MARINE BAND, Saturday evening, November 13.
The next concert in the MATINEE MUSICALS SERIES will be given by CHARLES CARVER, BASS, Tuesday evening, November 9 (High School).
The next concert in the CHORAL UNION SERIES will be given by SERGEI RACHMANINOFF, PIANIST, Thursday evening, November 11.
The Ann Arbor Art Association announces an exhibition of Marine Paintings by Charles H. Woodbury, in Alumni Memorial Hall, November 4 to 30, 2 to 5 p. m. daily.
Traffic Regulation.--By order of the Police Department, on the nights of Concerts, vehicles of all kinds will be prohibited on North University Avenue between Thayer and Ingalls Streets; Taxi-cabs must park on the West side of Thayer Street, facing South between North University Avenue and Washington Street; Private autos may be parked on Ingalls and Washington Streets. Persons on foot are requested to refrain from leaving from the Taxi-cab entrance at the Thayer Street side of the Auditorium.
Lost Articles should be enquired for at the office of Shirley W. Smith, Secretary of the University, in University Hail, where articles found should be left.
THE ANN ARBOR PRESS