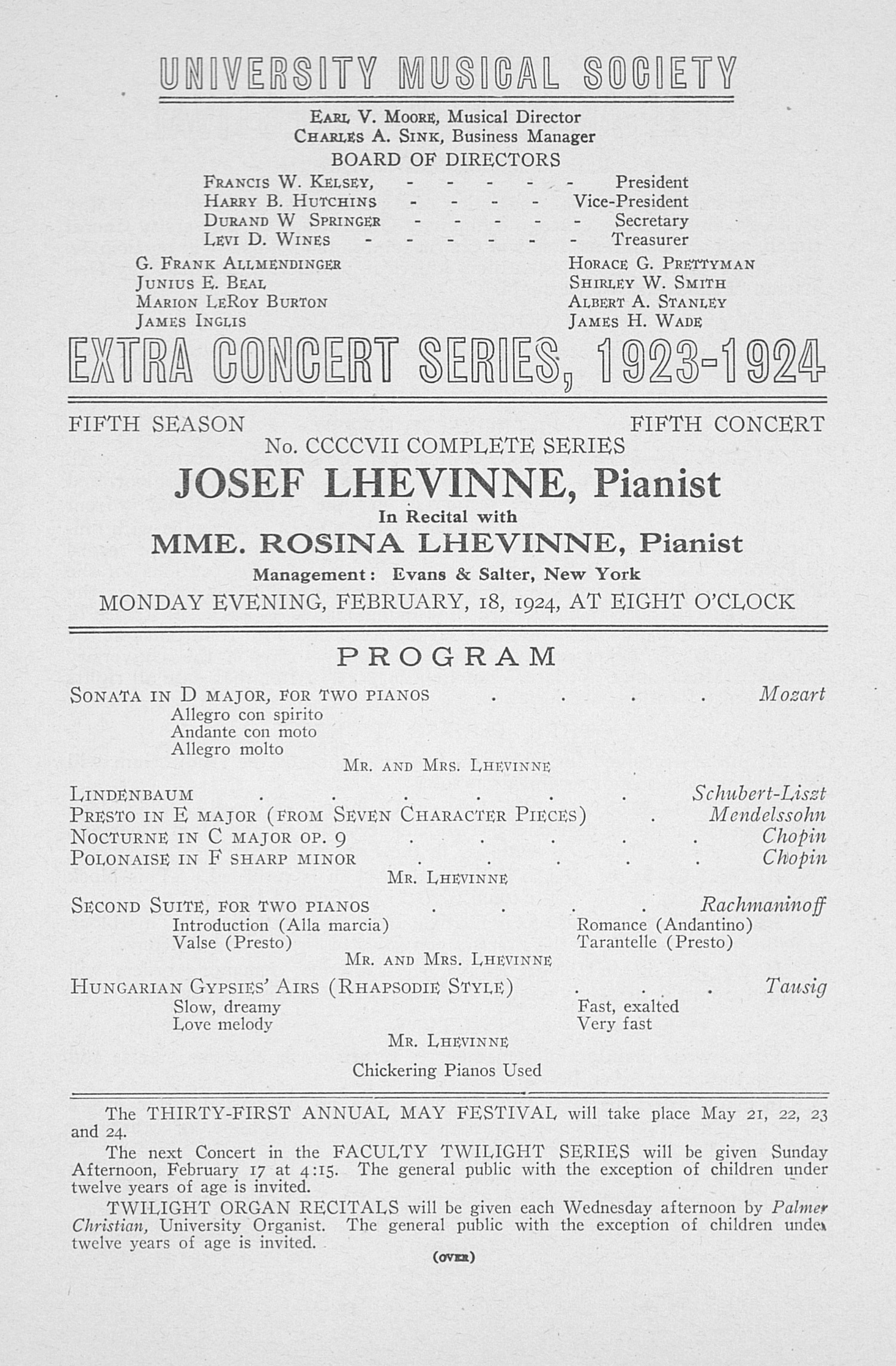 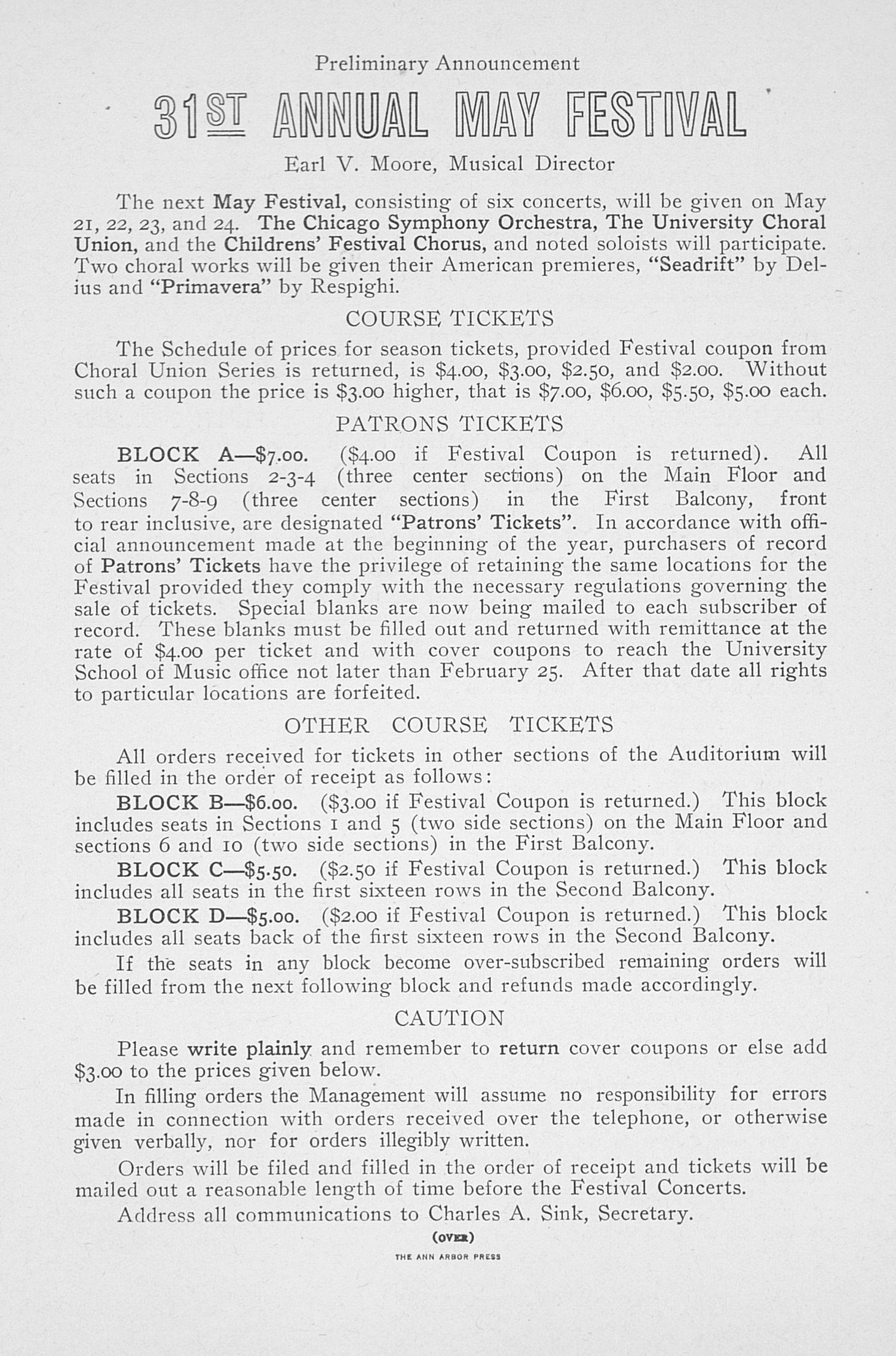 .18 8117
; I PETTY
Earl V. Moore, Musical Director Charles A. Sink, Business Manager
BOARD OF DIRECTORS
Francis W. Kelsey, President Harry B. Hutchins Vice-President
Durand W Springer ----Secretary Levi D. Wines ---... Treasurer
G. Frank Allmendingek Junius E. Beal Marion LeRoy Burton James Inglis
Horace G. Prettyman Shirley W. Smith Albert A. Stanley James H. Wade
FIFTH SEASON
FIFTH CONCERT
No. CCCCVII COMPLETE SERIES
JOSEF LHEVINNE, Pianist
In Recital with
MME. ROSINA LHEVINNE, Pianist
Management: Evans & Salter, New York
MONDAY EVENING, FEBRUARY, 18, 1924, AT EIGHT O'CLOCK
PROGRAM
Sonata in D major, for two pianos
Allegro con spirito Andante con moto Allegro molto
Mr. and Mrs. Lhevinne
LindEnbaum .....
Presto in E major (from Seven Character Pieces) Nocturne in C major op. 9 Polonaise in F sharp minor
Mr. Lhevinne
Mozart
Schubert-Liszt
Mendelssohn
Chopin
Chopin
Second Suite, for two pianos
Introduction (Alia marcia) Valse (Presto)
Mr. and Mrs. Lhevinne
Hungarian Gypsies' Airs (Rhapsodie Style) Slow, dreamy Love melody
Mr. Lhevinne
Chickering Pianos Used
Rachmaninoff Romance (Andantino) Tarantelle (Presto)
Fast, exalted Very fast
Tausig
The THIRTY-FIRST ANNUAL MAY FESTIVAL will take place May 21, 22, 23 and 24.
The next Concert in the FACULTY TWILIGHT SERIES will be given Sunday Afternoon, February 17 at 4:15. The general public with the exception of children under twelve years of age is invited.
TWILIGHT ORGAN RECITALS will be given each Wednesday afternoon by Palmer Christian, University Organist. The general public with the exception of children unden twelve years of age is invited. .
(OVD)
Preliminary Announcement
Earl V. Moore, Musical Director
The next May Festival, consisting of six concerts, will be given on May 21, 22, 23, and 24. The Chicago Symphony Orchestra, The University Choral Union, and the Childrens' Festival Chorus, and noted soloists will participate. Two choral works will be given their American premieres, "Seadrift" by Delius and "Primavera" by Respighi.
COURSE TICKETS
The Schedule of prices for season tickets, provided Festival coupon from Choral Union Series is returned, is $4.00, $3.00, $2.50, and $2.00. Without such a coupon the price is $3.00 higher, that is $7.00, $6.00, $5.50, $5.00 each.
PATRONS TICKETS
BLOCK A--$7.00. ($4.00 if Festival Coupon is returned). All seats in Sections 2-3-4 (three center sections) on the Main Floor and Sections 7-8-9 (three center sections) in the First Balcony, front to rear inclusive, are designated "Patrons' Tickets". In accordance with official announcement made at the beginning of the year, purchasers of record of Patrons' Tickets have the privilege of retaining the same locations for the Festival provided they comply with the necessary regulations governing the sale of tickets. Special blanks are now being mailed to each subscriber of record. These blanks must be filled out and returned with remittance at the rate of $4.00 per ticket and with cover coupons to reach the University School of Music office not later than February 25. After that date all rights to particular locations are forfeited.
OTHER COURSE TICKETS
All orders received for tickets in other sections of the Auditorium will be filled in the order of receipt as follows:
BLOCK B--$6.00. ($3.00 if Festival Coupon is returned.) This block includes seats in Sections 1 and 5 (two side sections) on the Main Floor and sections 6 and 10 (two side sections) in the First Balcony.
BLOCK C--$5.50. ($2.50 if Festival Coupon is returned.) This block includes all seats in the first sixteen rows in the Second Balcony.
BLOCK D--$5.00. ($2.00 if Festival Coupon is returned.) This block includes all seats back of the first sixteen rows in the Second Balcony.
If the seats in any block become over-subscribed remaining orders will be filled from the next following block and refunds made accordingly.
CAUTION
Please write plainly and remember to return cover coupons or else add $3.00 to the prices given below.
In filling orders the Management will assume no responsibility for errors made in connection with orders received over the telephone, or otherwise given verbally, nor for orders illegibly written.
Orders will be filed and filled in the order of receipt and tickets will be mailed out a reasonable length of time before the Festival Concerts. Address all communications to Charles A. Sink, Secretary.
(OVK)
THE '