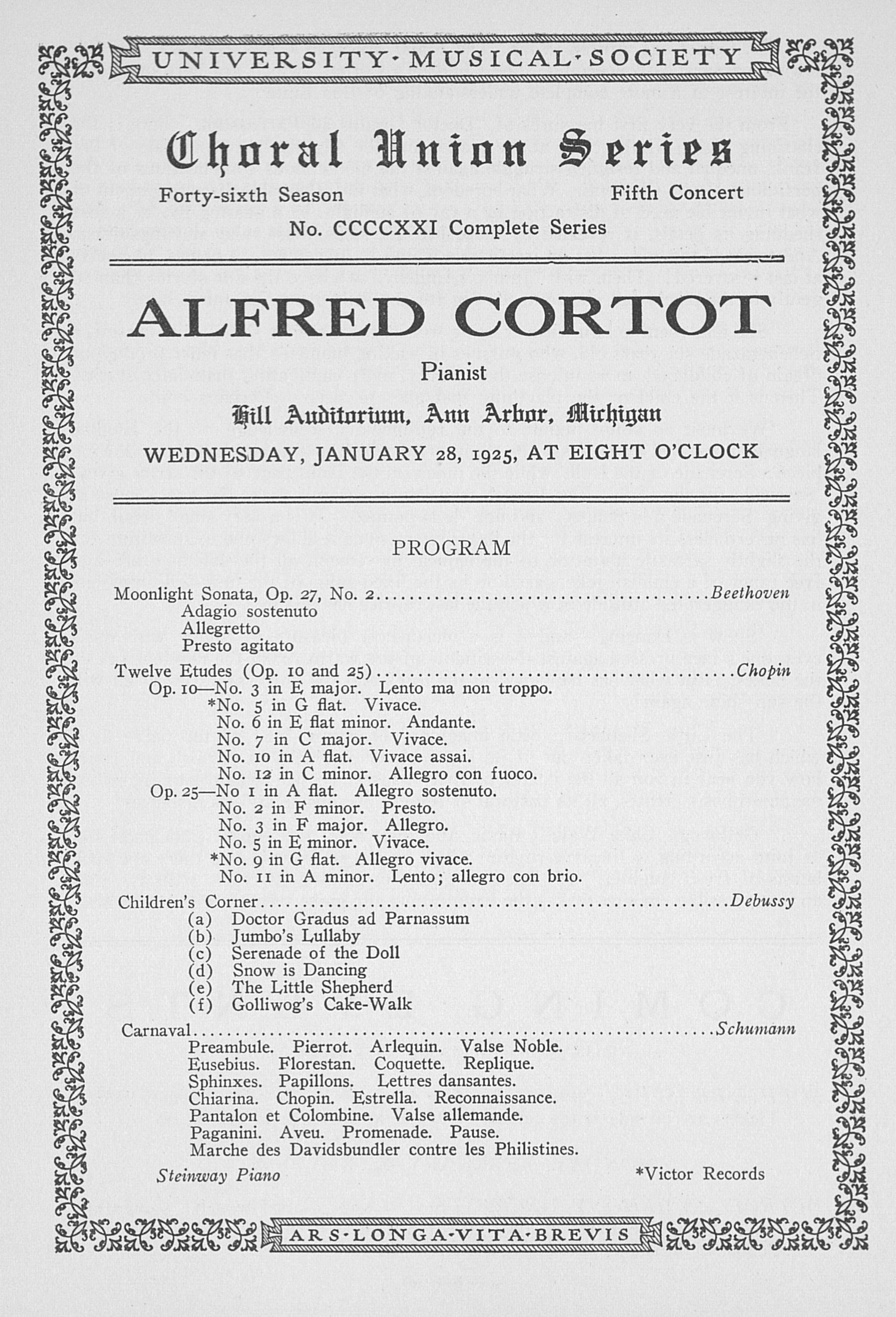 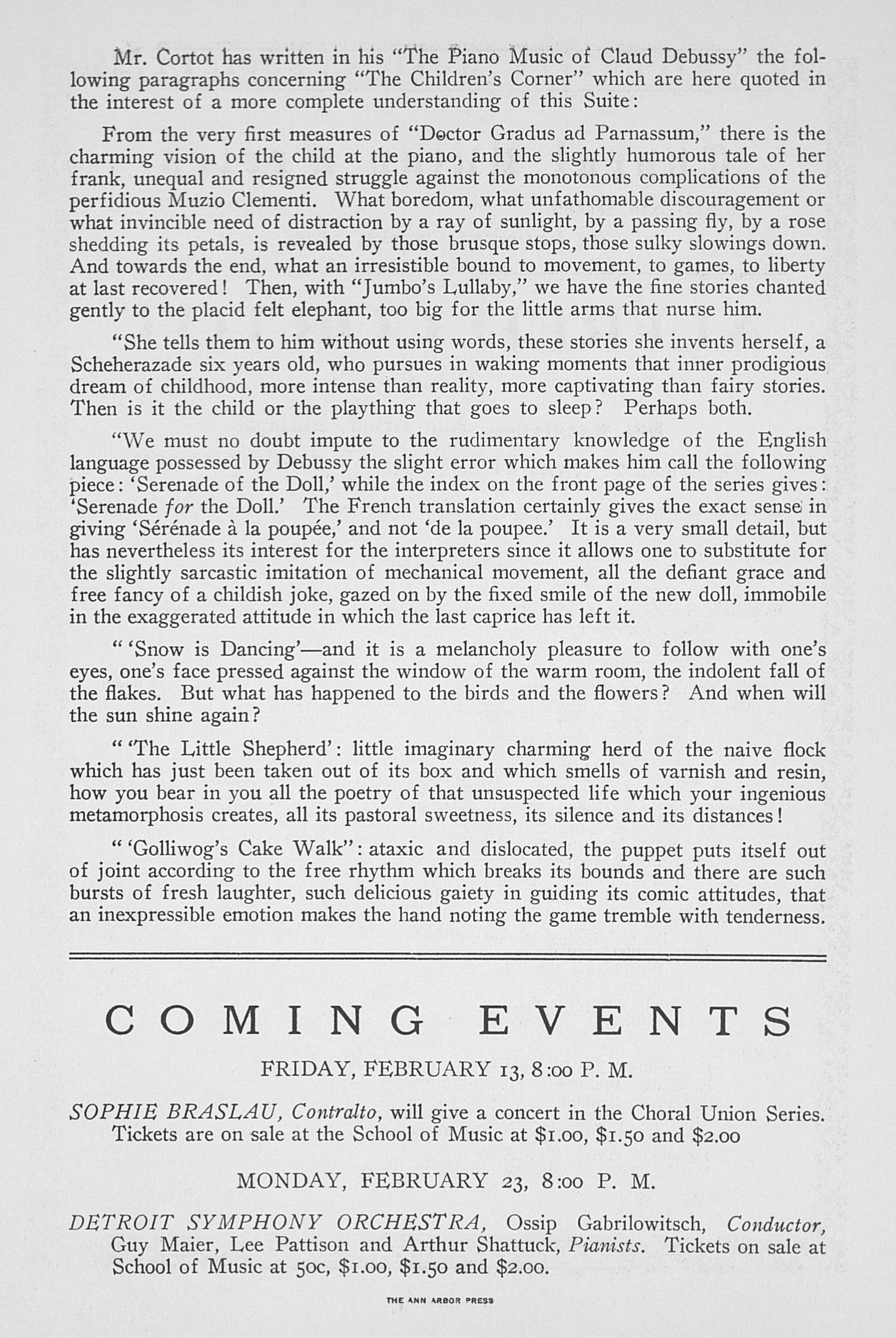 (ttfjnral
Fortysixth Season Fifth Concert
No. CCCCXXI Complete Series
? --?
ALFRED CORTOT
Pianist
2jtll Auditorium, Ann Arbor, iitrljtgatt
WEDNESDAY, JANUARY 28, 1925, AT EIGHT O'CLOCK
PROGRAM
Moonlight Sonata, Op. 27, No. 2........................................Beethoven
Adagio sostenuto Allegretto Presto agitato
Twelve Etudes (Op. 10 and 25)...........................................Chopin
Op. 10--No. 3 in E major. Lento ma non troppo. No. S in G flat. Vivace. No. 6 in E flat minor. Andante. No. 7 in C major. Vivace. No. 10 in A flat. Vivace assai. No. 12 in C minor. Allegro con fuoco. Op. 25--No 1 in A flat. Allegro sostenuto. No. 2 in F minor. Presto. No. 3 in F major. Allegro. No. 5 in E minor. Vivace. ?No. 9 in G flat. Allegro vivace. No. 11 in A minor. Lento; allegro con brio.
Children's Corner........................................................Debussy
(a) Doctor Gradus ad Parnassum
(b) Jumbo's Lullaby
(c) Serenade of the Doll
(d) Snow is Dancing
(e) The Little Shepherd
(f) Golliwog's CakeWalk
Carnaval..............................................................Schumann
Preambule. Pierrot. Arlequin. Valse Noble. Eusebius. Florestan. Coquette. Replique. Sphinxes. Papillons. Lettres dansantes. Chiarina. Chopin. Estrella. Reconnaissance. Pantalon et Colombine. Valse allemande. Paganini. Aveu. Promenade. Pause. Marche des Davidsbundler contre les Philistines.
Steinway Piano Victor Records
ARSLONGAVITABREVIS
Mr. Cortot has written in his "The Piano Music of Claud Debussy" the fol lowing paragraphs concerning "The Children's Corner" which are here quoted in the interest of a more complete understanding of this Suite:
From the very first measures of "Dector Gradus ad Parnassum," there is the charming vision of the child at the piano, and the slightly humorous tale of her frank, unequal and resigned struggle against the monotonous complications of the perfidious Muzio Clementi. What boredom, what unfathomable discouragement or what invincible need of distraction by a ray of sunlight, by a passing fly, by a rose shedding its petals, is revealed by those brusque stops, those sulky slowings down. And towards the end, what an irresistible bound to movement, to games, to liberty at last recovered! Then, with "Jumbo's Lullaby," we have the fine stories chanted gently to the placid felt elephant, too big for the little arms that nurse him.
"She tells them to him without using words, these stories she invents herself, a Scheherazade six years old, who pursues in waking moments that inner prodigious dream of childhood, more intense than reality, more captivating than fairy stories. Then is it the child or the plaything that goes to sleep Perhaps both.
"We must no doubt impute to the rudimentary knowledge of the English language possessed by Debussy the slight error which makes him call the following piece: 'Serenade of the Doll,' while the index on the front page of the series gives: 'Serenade for the Doll.' The French translation certainly gives the exact sense in giving 'Serenade a la poupee,' and not 'de la poupee.' It is a very small detail, but has nevertheless its interest for the interpreters since it allows one to substitute for the slightly sarcastic imitation of mechanical movement, all the defiant grace and free fancy of a childish joke, gazed on by the fixed smile of the new doll, immobile in the exaggerated attitude in which the last caprice has left it.
" 'Snow is Dancing'--and it is a melancholy pleasure to follow with one's eyes, one's face pressed against the window of the warm room, the indolent fall of the flakes. But what has happened to the birds and the flowers And when will the sun shine again
" 'The Little Shepherd': little imaginary charming herd of the naive flock which has just been taken out of its box and which smells of varnish and resin, how you bear in you all the poetry of that unsuspected life which your ingenious metamorphosis creates, all its pastoral sweetness, its silence and its distances!
" 'Golliwog's Cake Walk": ataxic and dislocated, the puppet puts itself out of joint according to the free rhythm which breaks its bounds and there are such bursts of fresh laughter, such delicious gaiety in guiding its comic attitudes, that an inexpressible emotion makes the hand noting the game tremble with tenderness.
COMING EVENTS
FRIDAY, FEBRUARY 13, 8:00 P. M.
SOPHIE BRASLAU, Contralto, will give a concert in the Choral Union Series. Tickets are on sale at the School of Music at $1.00, $1.50 and $2.00
MONDAY, FEBRUARY 23, 8:00 P. M.
DETROIT SYMPHONY ORCHESTRA, Ossip Gabrilowitsch, Conductor, Guy Maier, Lee Pattison and Arthur Shattuck, Pianists. Tickets on sale at School of Music at 50c, $1.00, $1.50 and $2.00.
THE 4NN MtBOR PRESS