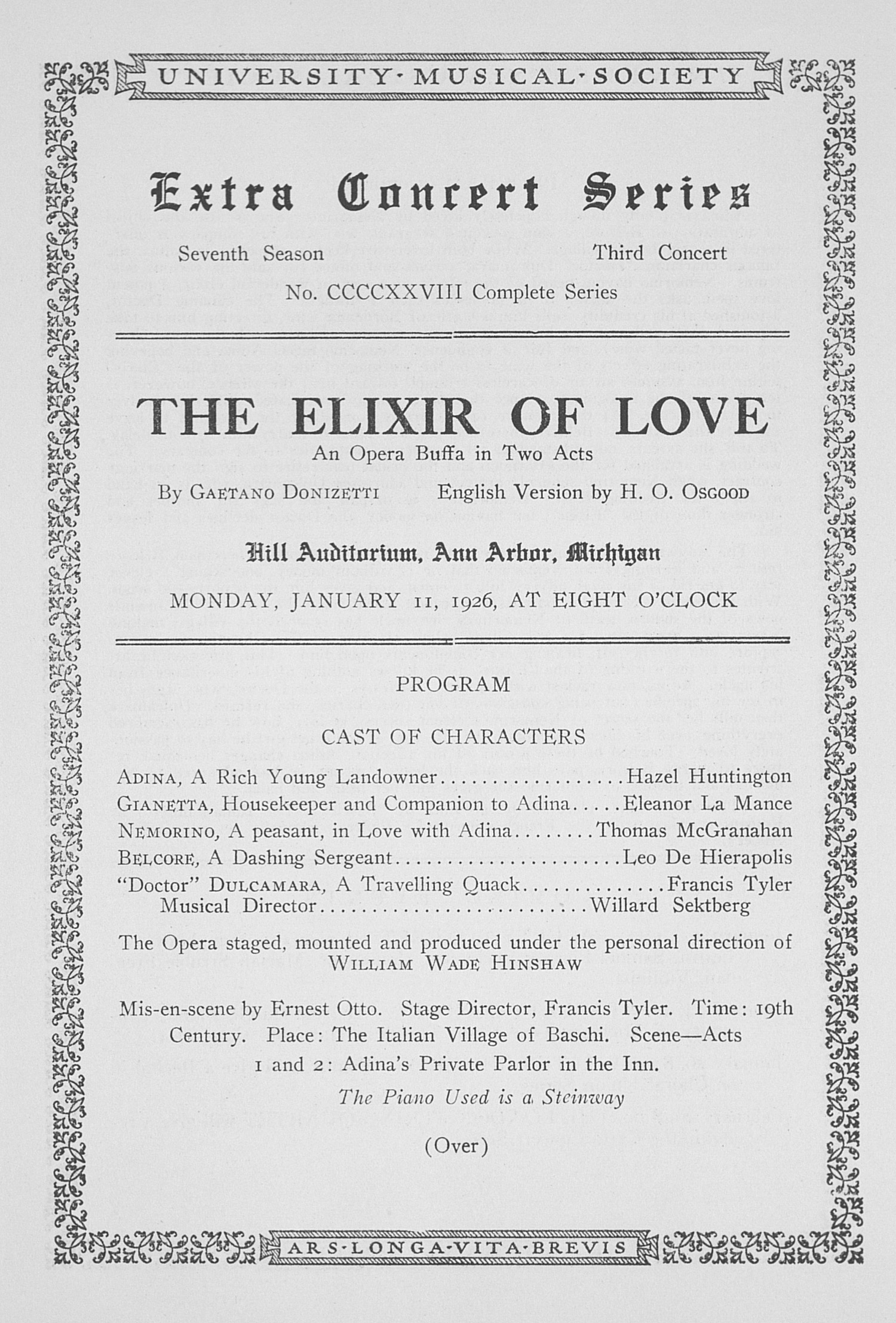 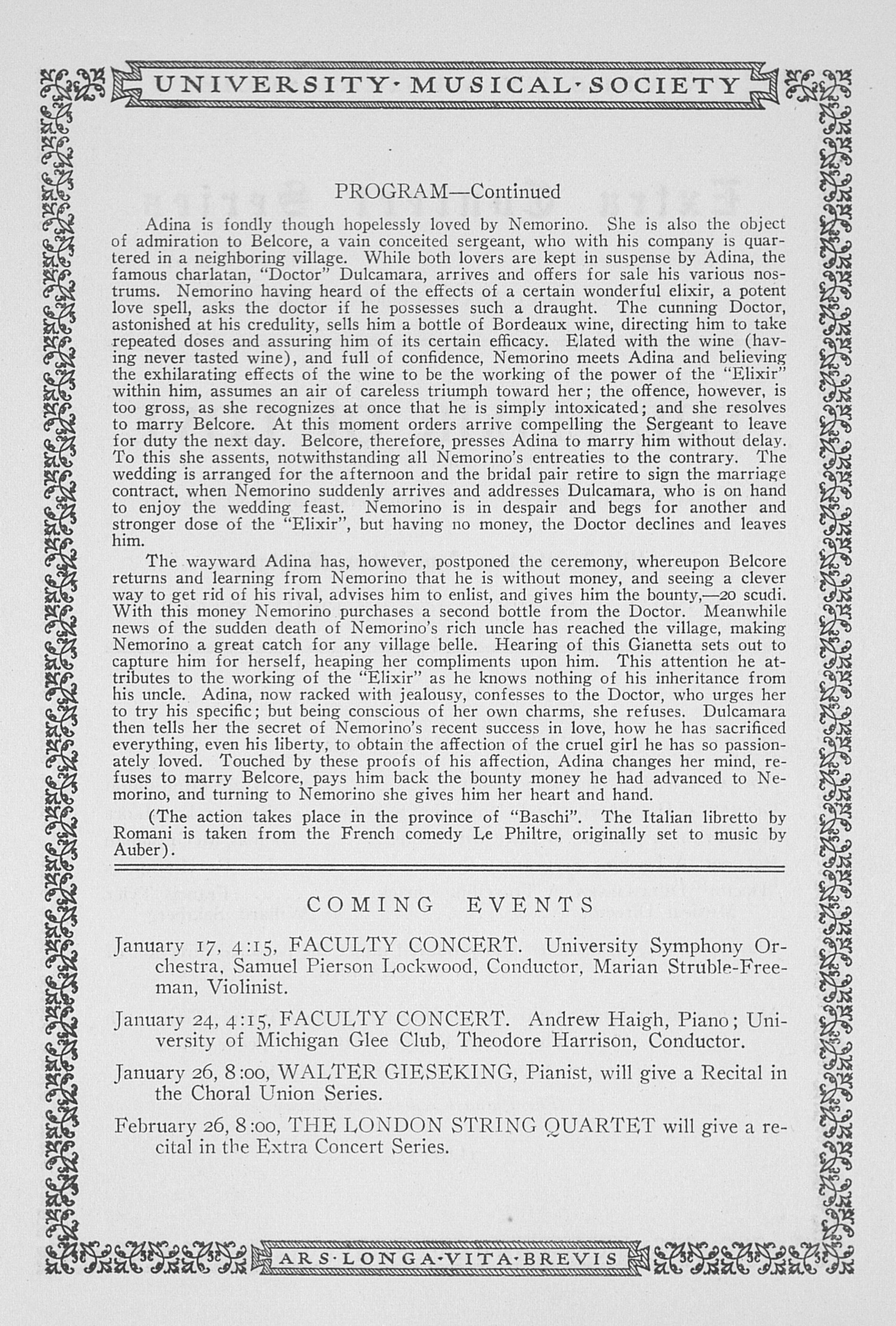 Extra (tinntttt
Seventh Season Third Concert
No. CCCCXXVIII Complete Series
THE ELIXIR OF LOVE
An Opera Buffa in Two Acts By Gaetano Donizetti English Version by H. O. Osgood
Hill Aubitorium, Ann Arbor, JHirb.tn.an
MONDAY, JANUARY n, 1926, AT EIGHT O'CLOCK
PROGRAM
CAST OF CHARACTERS
Adina, A Rich Young Landowner..................Hazel Huntington
Gianetta, Housekeeper and Companion to Adina.....Eleanor La Mance
Nemorino, A peasant, in Love with Adina........Thomas McGranahan
BelcorE, A Dashing Sergeant......................Leo De Hierapolis
"Doctor" Dulcamara, A Travelling Quack..............Francis Tyler
Musical Director..........................Willard Sektberg
The Opera staged, mounted and produced under the personal direction of William Wade Hinshaw
Mis-en-scene by Ernest Otto. Stage Director, Francis Tyler. Time: 19th Century. Place: The Italian Village of Baschi. Scene--Acts 1 and 2: Adina's Private Parlor in the Inn. The Piano Used is a, Steinway
(Over)
AR S-LON GA-VITA-BREVIS
UNIVERSITY' MUSICAL SOCIETY;
PROGRAM--Continued
Adina is fondly though hopelessly loved by Nemorino. She is also the object of admiration to Belcore, a vain conceited sergeant, who with his company is quartered in a neighboring village. While both lovers are kept in suspense by Adina, the famous charlatan, "Doctor" Dulcamara, arrives and offers for sale his various nostrums. Nemorino having heard of the effects of a certain wonderful elixir, a potent love spell, asks the doctor if he possesses such a draught. The cunning Doctor, astonished at his credulity, sells him a bottle of Bordeaux wine, directing him to take repeated doses and assuring him of its certain efficacy. Elated with the wine (having never tasted wine), and full of confidence, Nemorino meets Adina and believing the exhilarating effects of the wine to be the working of the power of the "Elixir" within him, assumes an air of careless triumph toward her; the offence, however, is too gross, as she recognizes at once that he is simply intoxicated; and she resolves to marry Belcore. At this moment orders arrive compelling the Sergeant to leave for duty the next day. Belcore, therefore, presses Adina to marry him without delay. To this she assents, notwithstanding all Nemorino's entreaties to the contrary. The wedding is arranged for the afternoon and the bridal pair retire to sign the marriage contract, when Nemorino suddenly arrives and addresses Dulcamara, who is on hand to enjoy the wedding feast. Nemorino is in despair and begs for another and stronger dose of the "Elixir", but having no money, the Doctor declines and leaves him.
The wayward Adina has, however, postponed the ceremony, whereupon Belcore returns and learning from Nemorino that he is without money, and seeing a clever way to get rid of his rival, advises him to enlist, and gives him the bounty,--20 scudi. With this money Nemorino purchases a second bottle from the Doctor. Meanwhile news of the sudden death of Nemorino's rich uncle has reached the village, making Nemorino a great catch for any village belle. Hearing of this Gianetta sets out to capture him for herself, heaping her compliments upon him. This attention he attributes to the working of the "Elixir" as he knows nothing of his inheritance from his uncle. Adina, now racked with jealousy, confesses to the Doctor, who urges her to try his specific; but being conscious of her own charms, she refuses. Dulcamara then tells her the secret of Nemorino's recent success in love, how he has sacrificed everything, even his liberty, to obtain the affection of the cruel girl he has so passionately loved. Touched by these proofs of his affection, Adina changes her mind, refuses to marry Belcore, pays him back the bounty money he had advanced to Nemorino, and turning to Nemorino she gives him her heart and hand.
(The action takes place in the province of "Baschi". The Italian libretto by Romani is taken from the French comedy Le Philtre, originally set to music by Auber).
COMING EVENTS
January 17. 4:15, FACULTY CONCERT. University Symphony Orchestra, Samuel Pierson Lockwood, Conductor, Marian Struble-Freeman, Violinist.
January 24, 4:15, FACULTY CONCERT. Andrew Haigh, Piano; University of Michigan Glee Club, Theodore Harrison, Conductor.
January 26, 8 :oo, WALTER GIESEKING, Pianist, will give a Recital in the Choral Union Series.
February 26, 8:00, THE LONDON STRING QUARTET will give a recital in the Extra Concert Series.
ARS-L ONGA-V ITA-BREVI S