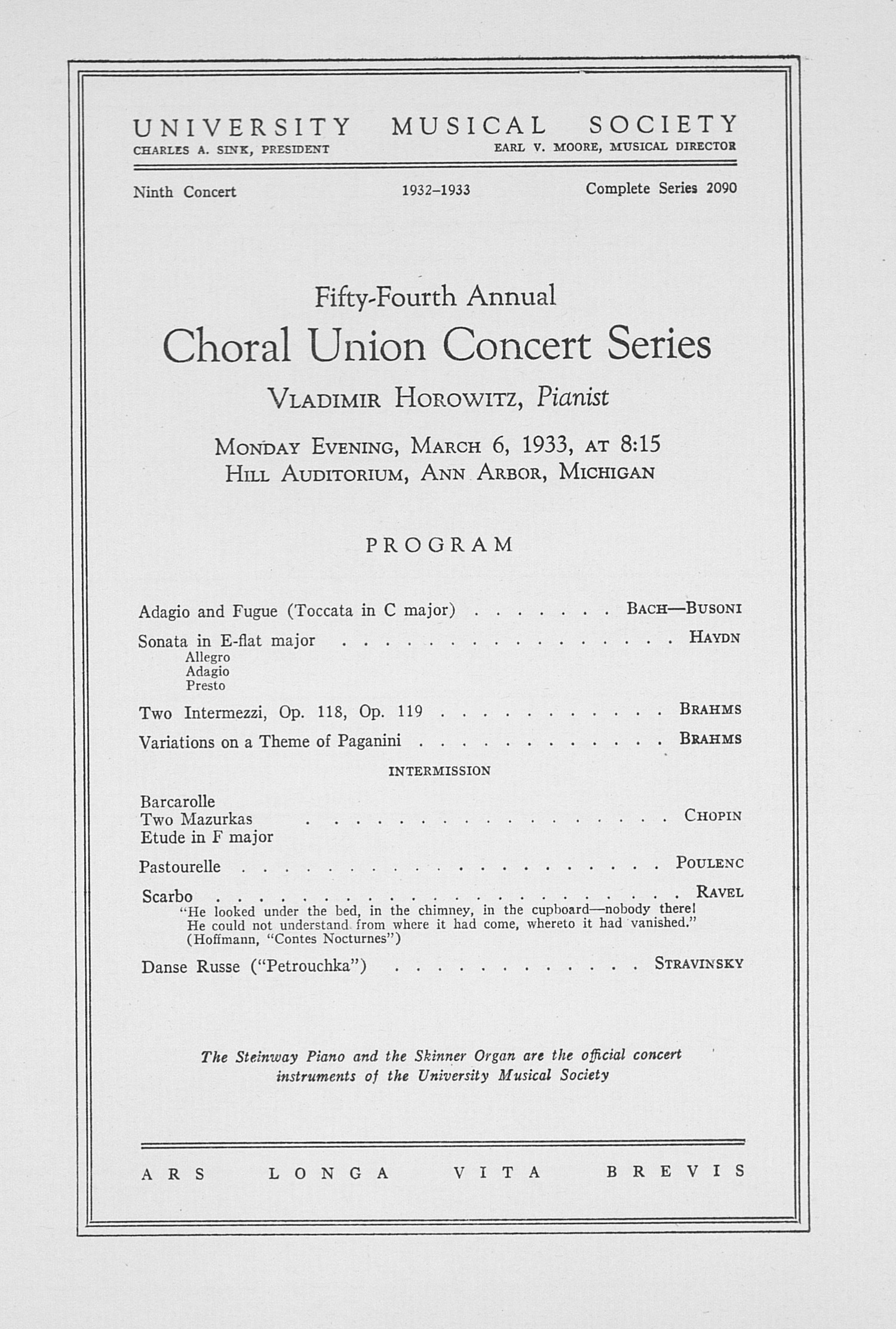 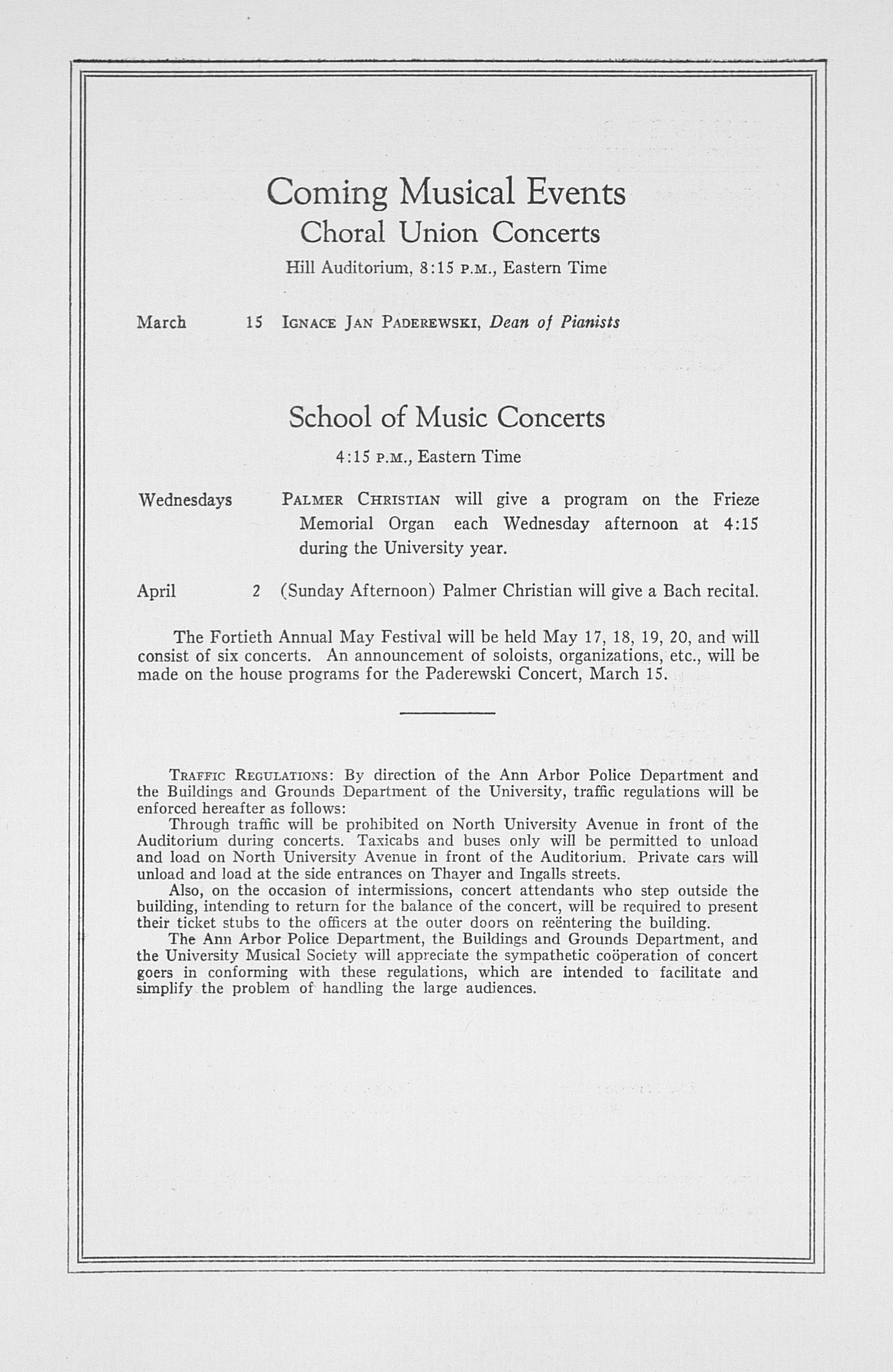 UNIVERSITY MUSICAL SOCIETY
CHARLES A. SINK, PRESIDENT EARL V. MOORE, MUSICAL DIRECTOR
Ninth Concert 1932-1933 Complete Series 2090
Fifty-Fourth Annual
Choral Union Concert Series
Vladimir Horowitz, Pianist
Monday Evening, March 6, 1933, at 8:15 Hill Auditorium, Ann Arbor, Michigan
PROGRAM
Adagio and Fugue (Toccata in C major).......Bach--Busoni
Sonata in E-flat major................Haydn
Allegro Adagio Presto
Two Intermezzi, Op. 118, Op. 119...........Brahms
Variations on a Theme of Paganini............Bxahms
INTERMISSION
Barcarolle
Two Mazurkas .................Chopin
Etude in F major
Pastourelle....................Poulenc
Scarbo......................Ravel
"He looked under the bed, in the chimney, in the cupboard--nobody there! He could not understand from where it had come, whereto it had vanished." (Hoffmann, "Contes Nocturnes")
Danse Russe ("Petrouchka") ............Stravinsky
The Sleinway Piano and the Skinner Organ are the official concert instruments of the University Musical Society
ARS LONGA VITA BREVIS
Coming Musical Events
Choral Union Concerts
Hill Auditorium, 8:15 p.m., Eastern Time
March
IS Ignace Jan Paderewski, Dean of Pianists
School of Music Concerts
4:15 p.m., Eastern Time
Wednesdays Palmer Christian will give a program on the Frieze Memorial Organ each Wednesday afternoon at 4:15 during the University year.
April 2 (Sunday Afternoon) Palmer Christian will give a Bach recital.
The Fortieth Annual May Festival will be held May 17, 18, 19, 20, and will consist of six concerts. An announcement of soloists, organizations, etc., will be made on the house programs for the Paderewski Concert, March 15.
Traffic Regulations: By direction of the Ann Arbor Police Department and the Buildings and Grounds Department of the University, traffic regulations will be enforced hereafter as follows:
Through traffic will be prohibited on North University Avenue in front of the Auditorium during concerts. Taxicabs and buses only will be permitted to unload and load on North University Avenue in front of the Auditorium. Private cars will unload and load at the side entrances on Thayer and Ingalls streets.
Also, on the occasion of intermissions, concert attendants who step outside the building, intending to return for the balance of the concert, will be required to present their ticket stubs to the officers at the outer doors on reentering the building.
The Ann Arbor Police Department, the Buildings and Grounds Department, and the University Musical Society will appreciate the sympathetic cooperation of concert goers in conforming with these regulations, which are intended to facilitate and simplify the problem of handling the large audiences.