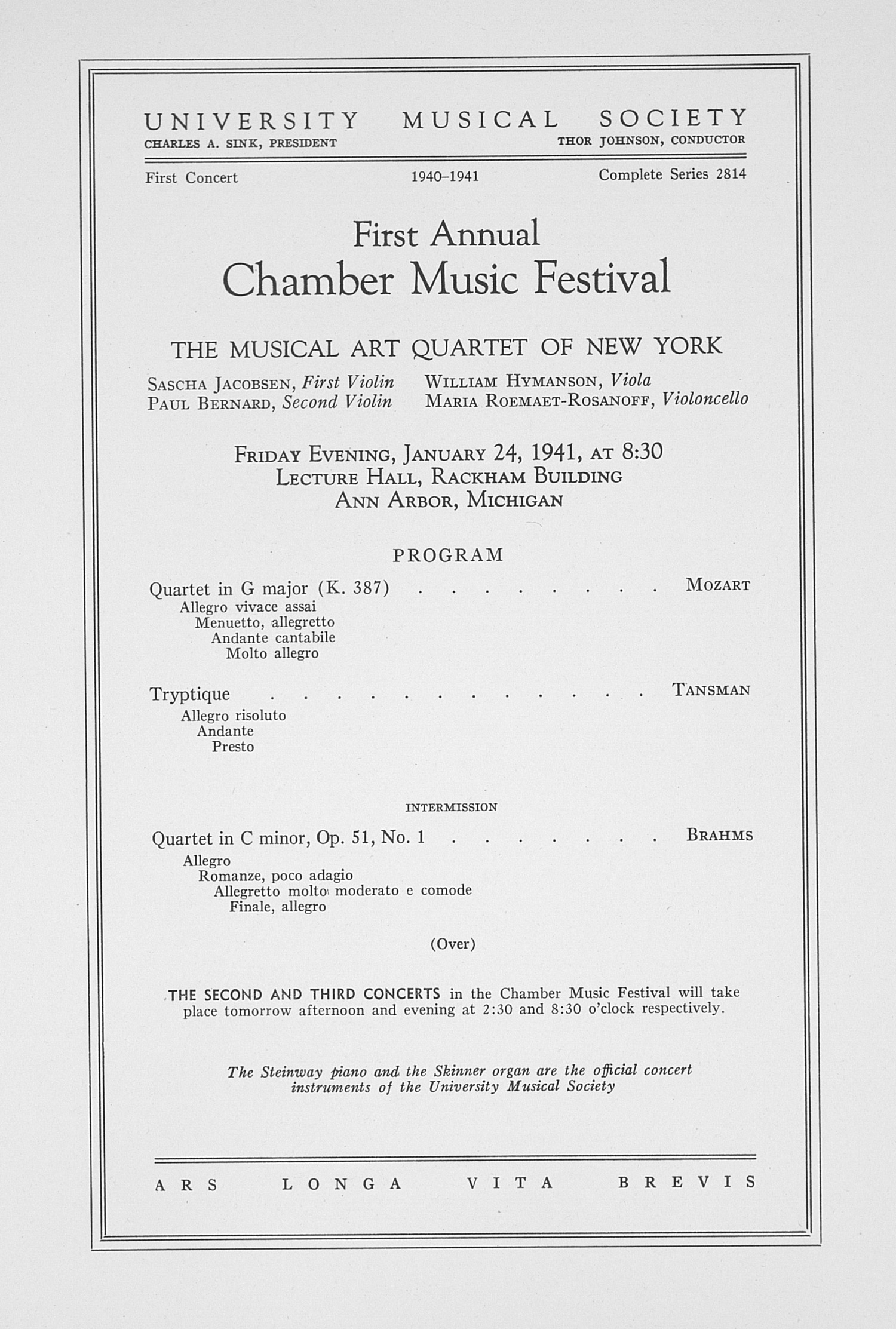 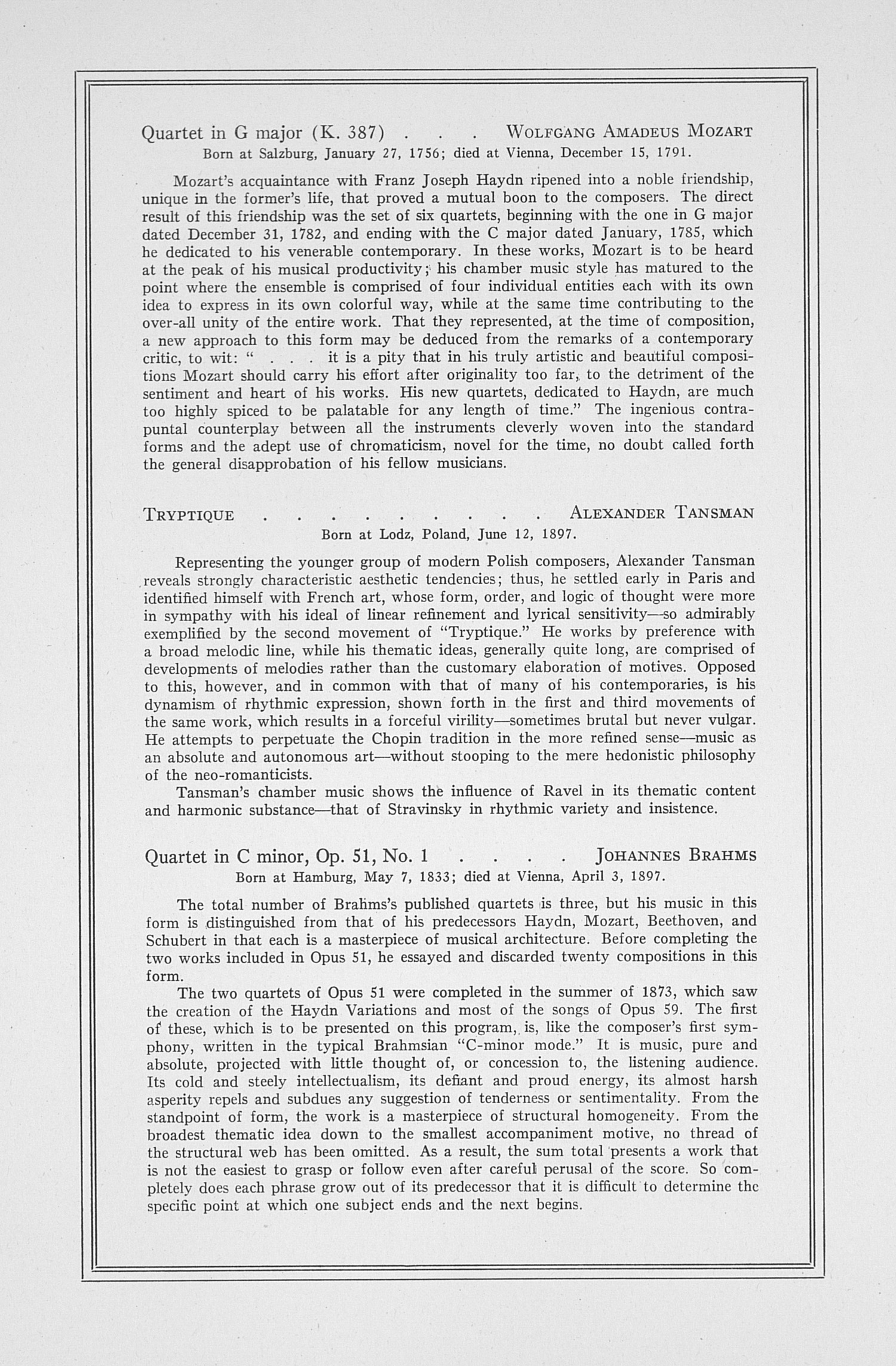 UNIVERSITY MUSICAL SOCIETY
CHARLES A. SINK, PRESIDENT THOR JOHNSON, CONDUCTOR
First Concert 1940-1941 Complete Series 2814
First Annual
Chamber Music Festival
THE MUSICAL ART QUARTET OF NEW YORK
Sascha Jacobsen, First Violin William Hymanson, Viola
Paul Bernard, Second Violin Maria Roemaet-Rosanoff, Violoncello
Friday Evening, January 24, 1941, at 8:30
Lecture Hall, Rackham Building
Ann Arbor, Michigan
PROGRAM
Quartet in G major (K. 387)........Mozart
Allegro vivace assai Menuetto, allegretto Andante cantabile Molto allegro
Tryptique............ Tansman
Allegro risoluto Andante Presto
INTERMISSION
Quartet in C minor, Op. 51, No. 1.......Brahms
Allegro
Romanze, poco adagio
Allegretto molto. moderato e comode Finale, allegro
(Over)
.THE SECOND AND THIRD CONCERTS in the Chamber Music Festival will take place tomorrow afternoon and evening at 2:30 and 8:30 o'clock respectively.
The Steinway piano and the Skinner organ are the official concert instruments of the University Musical Society
ARS LONGA VITA BREVIS
Quartet in G major (K. 387) . . . Wolfgang Amadeus Mozart
Born at Salzburg, January 27, 1756; died at Vienna, December 15, 1791.
Mozart's acquaintance with Franz Joseph Haydn ripened into a noble friendship, unique in the former's life, that proved a mutual boon to the composers. The direct result of this friendship was the set of six quartets, beginning with the one in G major dated December 31, 1782, and ending with the C major dated January, 1785, which he dedicated to his venerable contemporary. In these works, Mozart is to be heard at the peak of his musical productivity; his chamber music style has matured to the point where the ensemble is comprised of four individual entities each with its own idea to express in its own colorful way, while at the same time contributing to the over-all unity of the entire work. That they represented, at the time of composition, a new approach to this form may be deduced from the remarks of a contemporary critic, to wit: " . . . it is a pity that in his truly artistic and beautiful compositions Mozart should carry his effort after originality too far, to the detriment of the sentiment and heart of his works. His new quartets, dedicated to Haydn, are much too highly spiced to be palatable for any length of time." The ingenious contrapuntal counterplay between all the instruments cleverly woven into the standard forms and the adept use of chromaticism, novel for the time, no doubt called forth the general disapprobation of his fellow musicians.
Tryptique.........Alexander Tansman
Born at Lodz, Poland, June 12, 1897.
Representing the younger group of modern Polish composers, Alexander Tansman reveals strongly characteristic aesthetic tendencies; thus, he settled early in Paris and identified himself with French art, whose form, order, and logic of thought were more in sympathy with his ideal of linear refinement and lyrical sensitivity--so admirably exemplified by the second movement of "Tryptique." He works by preference with a broad melodic line, while his thematic ideas, generally quite long, are comprised of developments of melodies rather than the customary elaboration of motives. Opposed to this, however, and in common with that of many of his contemporaries, is his dynamism of rhythmic expression, shown forth in the first and third movements of the same work, which results in a forceful virility--sometimes brutal but never vulgar. He attempts to perpetuate the Chopin tradition in the more refined sense--music as an absolute and autonomous art--without stooping to the mere hedonistic philosophy of the neo-romanticists.
Tansman's chamber music shows the influence of Ravel in its thematic content and harmonic substance--that of Stravinsky in rhythmic variety and insistence.
Quartet in C minor, Op. SI, No. 1 .... Johannes Brahms
Born at Hamburg, May 7, 1833; died at Vienna, April 3, 1897.
The total number of Brahms's published quartets is three, but his music in this form is distinguished from that of his predecessors Haydn, Mozart, Beethoven, and Schubert in that each is a masterpiece of musical architecture. Before completing the two works included in Opus 51, he essayed and discarded twenty compositions in this form.
The two quartets of Opus 51 were completed in the summer of 1873, which saw the creation of the Haydn Variations and most of the songs of Opus 59. The first of these, which is to be presented on this program, is, like the composer's first symphony, written in the typical Brahmsian "C-minor mode." It is music, pure and absolute, projected with little thought of, or concession to, the listening audience. Its cold and steely intellectualism, its defiant and proud energy, its almost harsh asperity repels and subdues any suggestion of tenderness or sentimentality. From the standpoint of form, the work is a masterpiece of structural homogeneity. From the broadest thematic idea down to the smallest accompaniment motive, no thread of the structural web has been omitted. As a result, the sum total presents a work that is not the easiest to grasp or follow even after careful perusal of the score. So completely does each phrase grow out of its predecessor that it is difficult to determine the specific point at which one subject ends and the next begins.