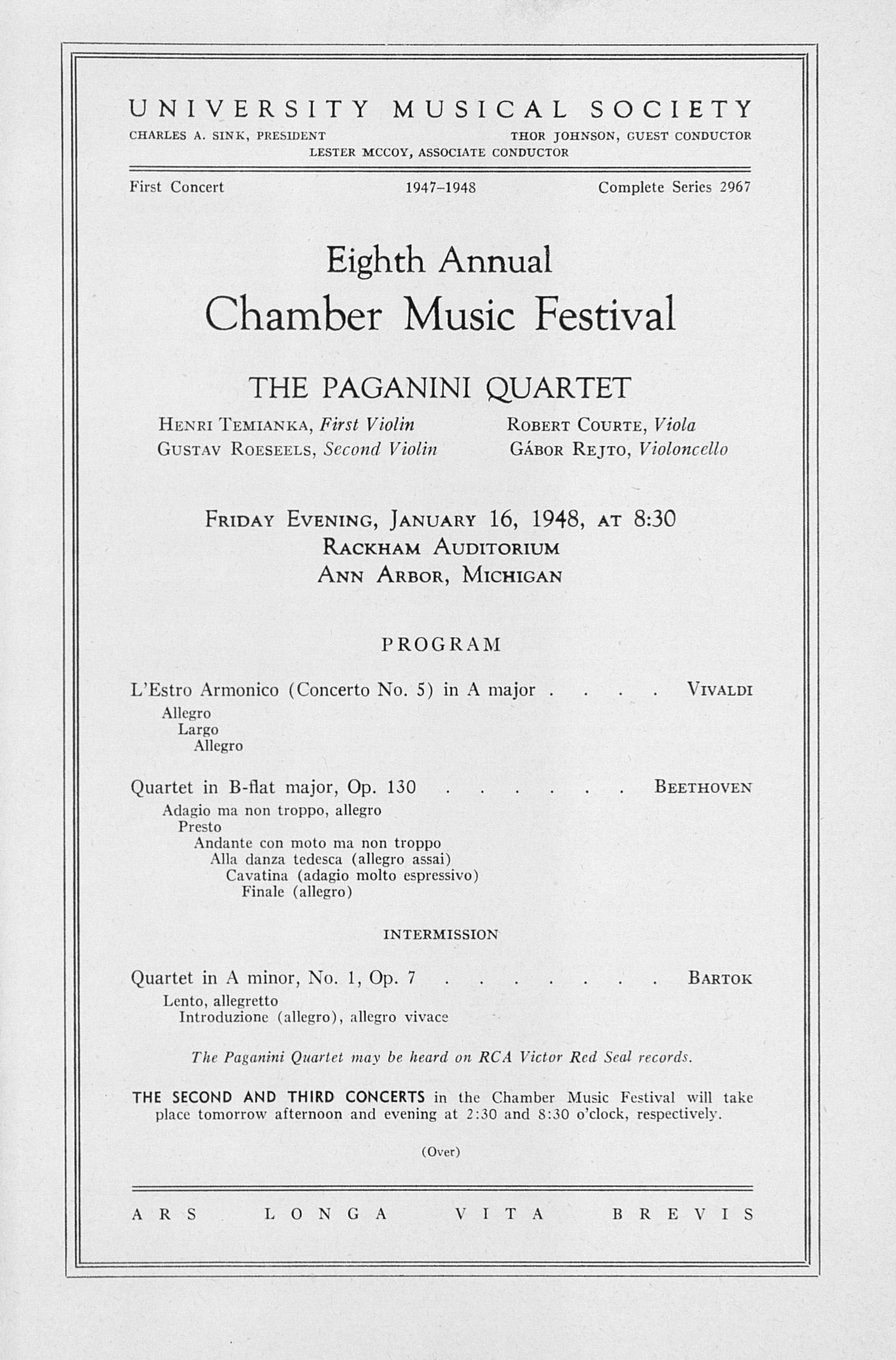 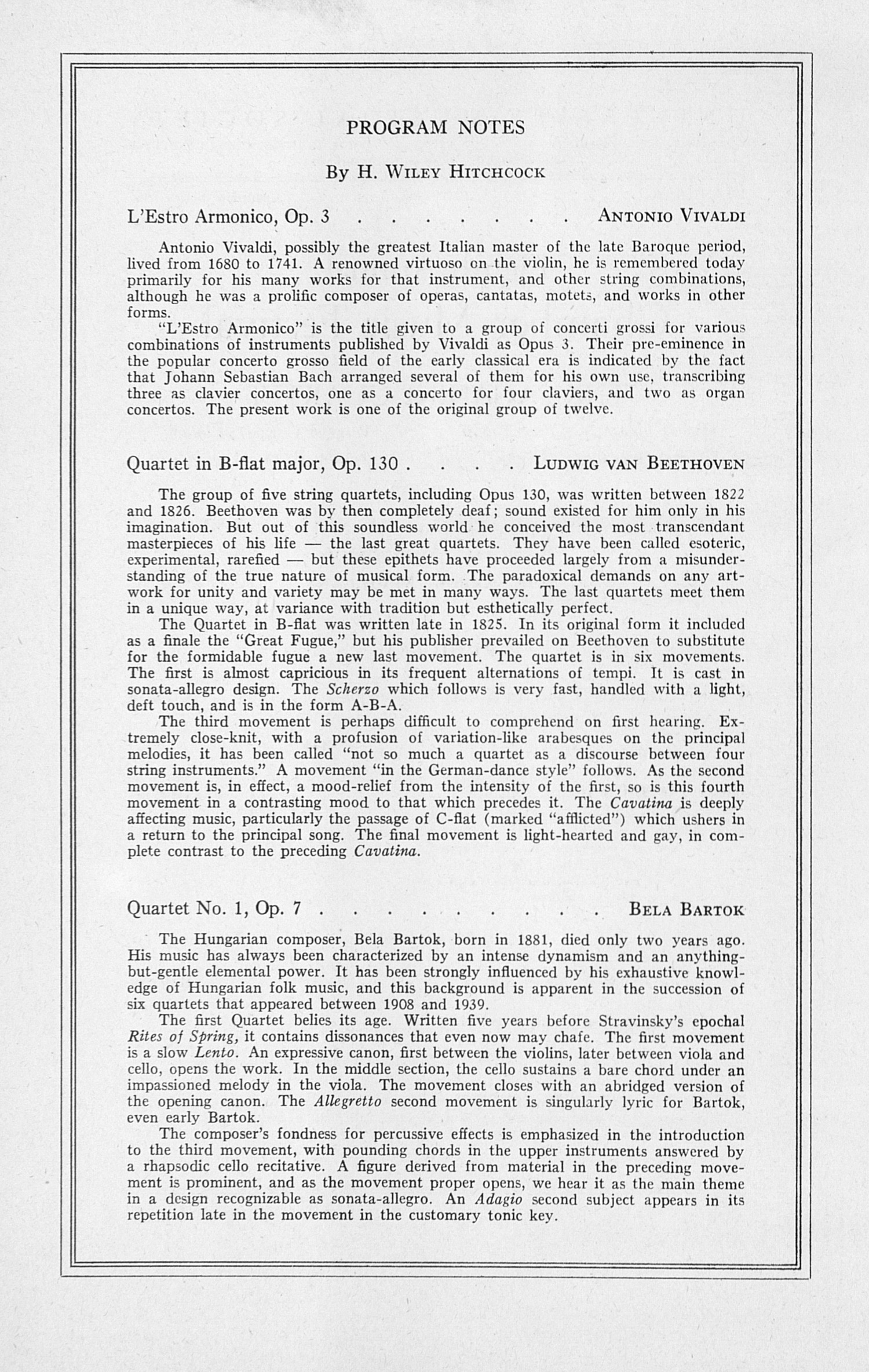 UNIVERSITY MUSICAL SOCIETY
CHARLES A. SINK, PRESIDENT THOR JOHNSON, GUEST CONDUCTOR
LESTER MCCOY, ASSOCIATE CONDUCTOR
First Concert 1947-1948 Complete Series 2967
Eighth Annual
Chamber Music Festival
THE PAGANINI QUARTET
Henri Temianka, First Violin Robert Courte, Viola
Gustav Roeseels, Second Violin Gabor Rejto, Violoncello
Friday Evening, January 16, 1948, at 8:30 Rackham Auditorium Ann Arbor, Michigan
PROGRAM
L'Estro Armonico (Concerto No. 5) in A major .... Vivaldi
Allegro Largo Allegro
Quartet in B-flat major, Op. 130......Beethoven
Adagio ma non troppo, allegro Presto
Andante con moto ma non troppo Alia danza tcdesca (allegro assai) Cavatina (adagio molto espressivo) Finale (allegro)
INTERMISSION
Quartet in A minor, No. 1, Op. 7.......Bartok
Lento, allegretto
Introduzione (allegro), allegro vivace
The Paganini Quartet may be heard on RCA Victor Red Seal records.
THE SECOND AND THIRD CONCERTS in the Chamber Music Festival will take place tomorrow afternoon and evening at 2:30 and S:30 o'clock, respectively.
(Over)
ARS LONGA VITA BREVIS
PROGRAM NOTES By H. Wiley Hitchcock
L'Estro Armonico, Op. 3.......Antonio Vivaldi
Antonio Vivaldi, possibly the greatest Italian master of the late Baroque period, lived from 1680 to 1741. A renowned virtuoso on the violin, he is remembered today primarily for his many works for that instrument, and other siring combinations, although he was a prolific composer of operas, cantatas, moteti, and works in other forms.
"L'Estro Armonico" is the title given to a group of concerti grossi for various combinations of instruments published by Vivaldi as Opus 3. Their pre-eminence in the popular concerto grosso field of the early classical era is indicated by the fact that Johann Sebastian Bach arranged several of them for his own use. transcribing three as clavier concertos, one as a concerto for four claviers, and two as organ concertos. The present work is one of the original group of twelve.
Quartet in B-flat major, Op. 130 . . . . Ludwig van Beethoven
The group of five string quartets, including Opus 130, was written between 1822 and 1826. Beethoven was by then completely deaf; sound existed for him only in his imagination. But out of this soundless world he conceived the most transcendant masterpieces of his life -the last great quartets. They have been called esoteric, experimental, rarefied -but these epithets have proceeded largely from a misunderstanding of the true nature of musical form. The paradoxical demands on any artwork for unity and variety may be met in many ways. The last quartets meet them in a unique way, at variance with tradition but esthetically perfect.
The Quartet in B-flat was written late in 1825. In its original form it included as a finale the "Great Fugue," but his publisher prevailed on Beethoven to substitute for the formidable fugue a new last movement. The quartet is in six movements. The first is almost capricious in its frequent alternations of tempi. It is cast in sonata-allegro design. The Scherzo which follows is very fast, handled with a light, deft touch, and is in the form A-B-A.
The third movement is perhaps difficult to comprehend on first hearing. Extremely close-knit, with a profusion of variation-like arabesques on the principal melodies, it has been called "not so much a quartet as a discourse between four string instruments." A movement "in the German-dance style" follows. As the second movement is, in effect, a mood-relief from the intensity of the first, so is this fourth movement in a contrasting mood to that which precedes it. The Cavatina is deeply affecting music, particularly the passage of C-flat (marked "afflicted") which ushers in a return to the principal song. The final movement is light-hearted and gay, in complete contrast to the preceding Cavatina.
Quartet No. 1, Op. 7.........Bela Bartok
The Hungarian composer, Bela Bartok, born in 1881, died only two years ago. His music has always been characterized by an intense dynamism and an anythingbut-gentle elemental power. It has been strongly influenced by his exhaustive knowledge of Hungarian folk music, and this background is apparent in the succession of six quartets that appeared between 1908 and 1939.
The first Quartet belies its age. Written five years before Stravinsky's epochal Rites of Spring, it contains dissonances that even now may chafe. The first movement is a slow Lento. An expressive canon, first between the violins, later between viola and cello, opens the work. In the middle section, the cello sustains a bare chord under an impassioned melody in the viola. The movement closes with an abridged version of the opening canon. The Allegretto second movement is singularly lyric for Bartok, even early Bartok.
The composer's fondness for percussive effects is emphasized in the introduction to the third movement, with pounding chords in the upper instruments answered by a rhapsodic cello recitative. A figure derived from material in the preceding movement is prominent, and as the movement proper opens, we hear it as the main theme in a design recognizable as sonata-allegro. An Adagio second subject appears in its repetition late in the movement in the customary tonic key.