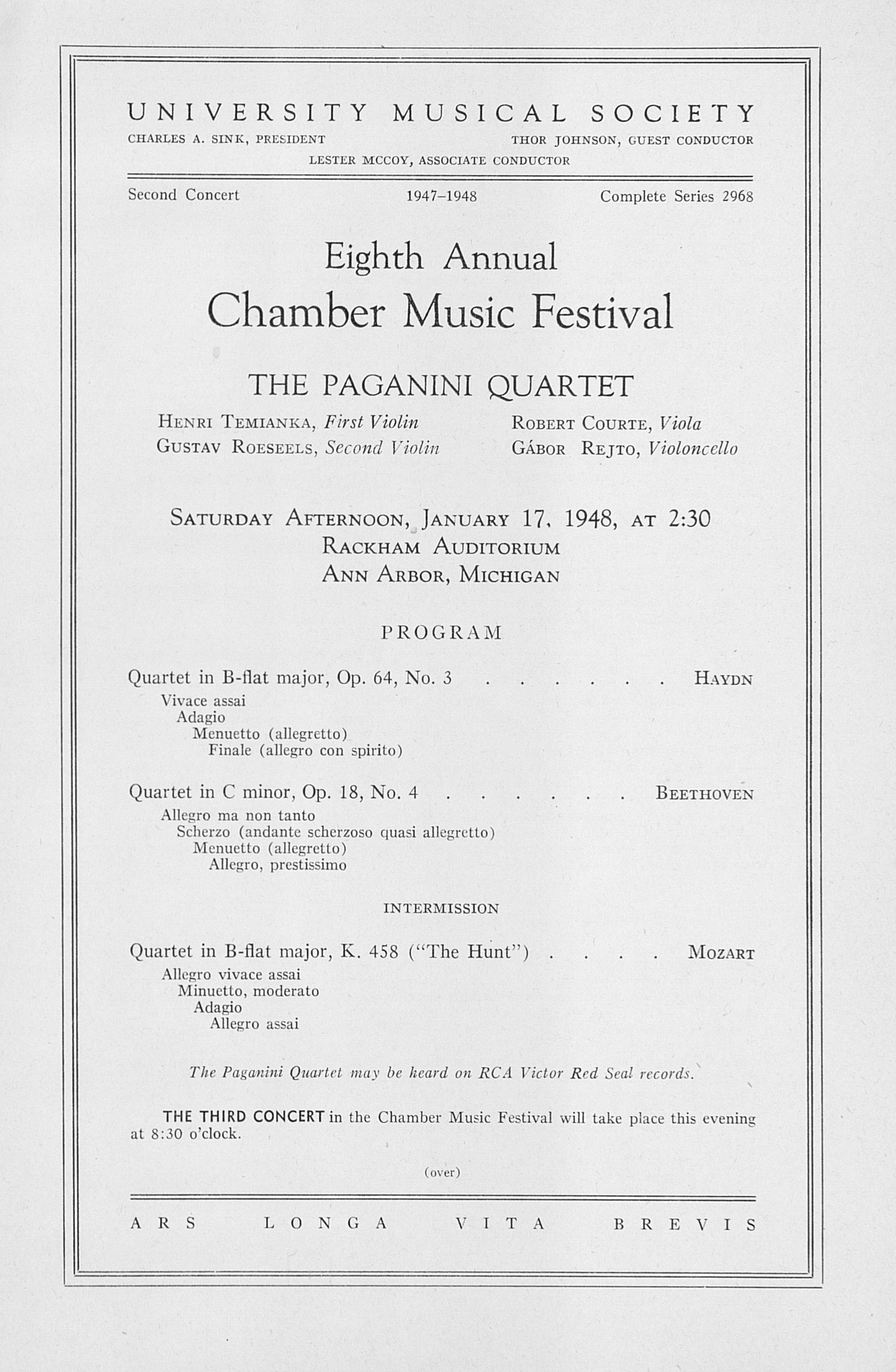 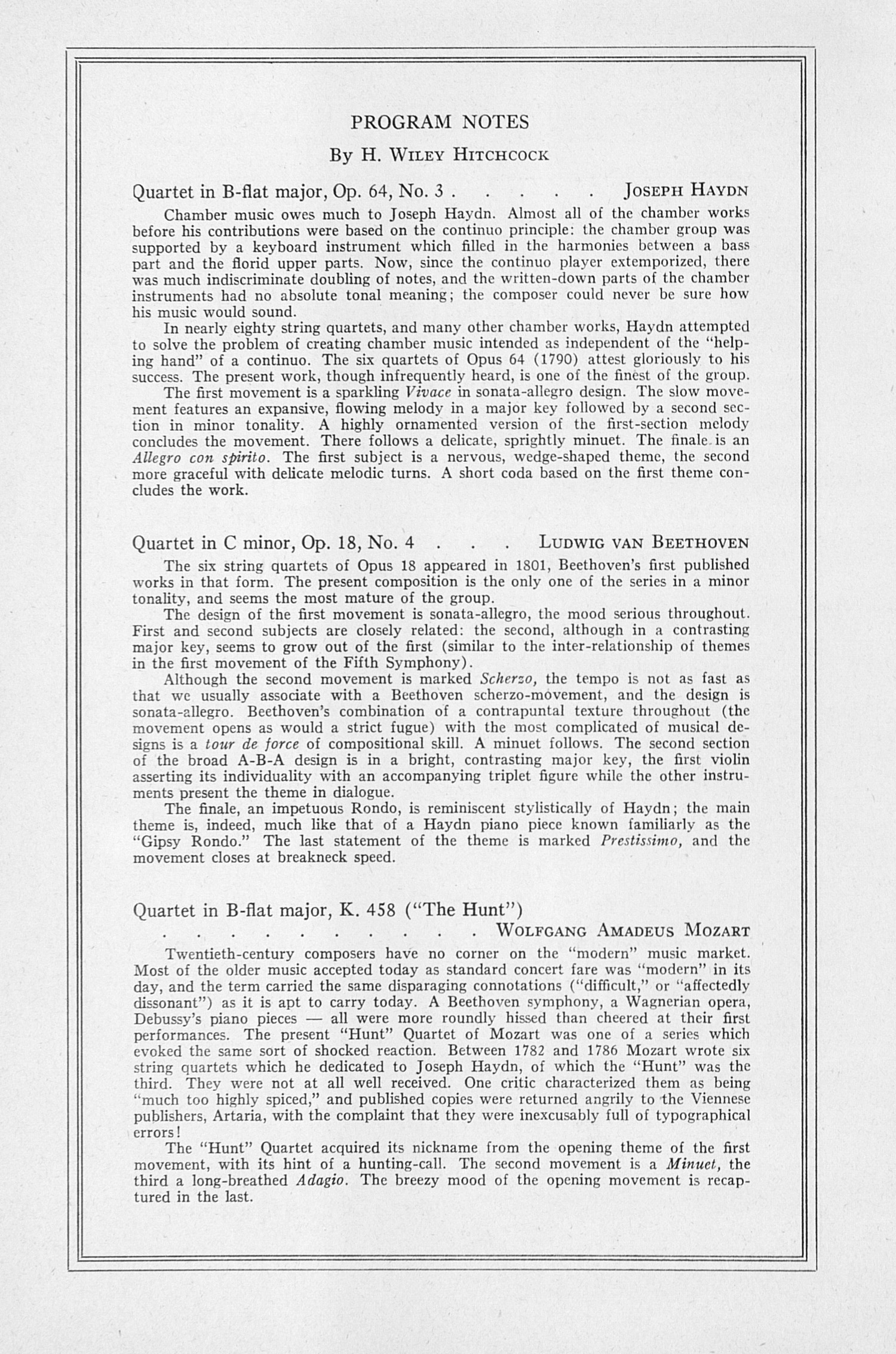 UNIVERSITY MUSICAL SOCIETY
CHARLES A. SINK, PRESIDENT THOR JOHNSON, GUEST CONDUCTOR
LESTER MCCOY, ASSOCIATE CONDUCTOR
Second Concert 1947-1948 Complete Series 2968
Eighth Annual
Chamber Music Festival
THE PAGANINI QUARTET
Henri Temianka, First Violin Robert Courte, Viola
Gustav Roeseels, Second Violin Gabor Rejto, Violoncello
Saturday Afternoon, January 17, 1948, at 2:30 Rackham Auditorium Ann Arbor, Michigan
PROGRAM
Quartet in B-ilat major, Op. 64, No. 3......Haydn
Vivace assai Adagio Menuetto (allegretto)
Finale (allegro con spirito)
Quartet in C minor, Op. 18, No. 4......Beethoven
Allegro ma non tanto
Scherzo (andante scherzoso quasi allegretto) Menuetto (allegretto) Allegro, prestissimo
INTERMISSION
Quartet in B-flat major, K. 458 ("The Hunt") .... Mozart
Allegro vivace assai Minuetto, moderato Adagio
Allegro assai
The Pagan'mi Quartet inuy be heard on RCA Victor Red Sea! records.
THE THIRD CONCERT in the Chamber Music Festival will take place this evening at 8:30 o'clock.
(ov.-ri
A R S L 0 N G A VITA B R E V I S
PROGRAM NOTES By H. Wiley Hitchcock
Quartet in B-flat major, Op. 64, No. 3.....Joseph Haydn
Chamber music owes much to Joseph Haydn. Almost all of the chamber works before his contributions were based on the continuo principle: Ihe chamber group was supported by a keyboard instrument which filled in the harmonies between a bass part and the florid upper parts. Now, since the continuo player extemporized, there was much indiscriminate doubling of notes, and the written-down parts of the chamber instruments had no absolute tonal meaning; the composer could never be sure how his music would sound.
In nearly eighty string quartets, and many other chamber works, Haydn attempted to solve the problem of creating chamber music intended as independent of the "helping hand" of a continuo. The six quartets of Opus 64 (1790) attest gloriously to his success. The present work, though infrequently heard, is one of the finest of the group.
The first movement is a sparkling Vivace in sonata-allegro design. The slow movement features an expansive, flowing melody in a major key followed by a second section in minor tonality. A highly ornamented version of the first-section melody concludes the movement. There follows a delicate, sprightly minuet. The finale is an Allegro con spirito. The first subject is a nervous, wedge-shaped theme, the second more graceful with delicate melodic turns. A short coda based on the first theme concludes the work.
Quartet in C minor, Op. 18, No. 4 ... Ludwig van Beethoven
The six string quartets of Opus 18 appeared in 1801, Beethoven's first published works in that form. The present composition is the only one of the series in a minor tonality, and seems the most mature of the group.
The design of the first movement is sonata-allegro, the mood serious throughout. First and second subjects are closely related: the second, although in a contrasting major key, seems to grow out of the first (similar to the inter-relationship of themes in the first movement of the Fifth Symphony).
Although the second movement is marked Scherzo, the tempo is not as fast as that we usually associate with a Beethoven scherzo-movement, and the design is sonata-allegro. Beethoven's combination of a contrapuntal texture throughout (the movement opens as would a strict fugue) with the most complicated of musical designs is a tour de force of compositional skill. A minuet follows. The second section of the broad A-B-A design is in a bright, contrasting major key, the first violin asserting its individuality with an accompanying triplet figure while the other instruments present the theme in dialogue.
The finale, an impetuous Rondo, is reminiscent stylistically of Haydn; the main theme is, indeed, much like that of a Haydn piano piece known familiarly as the "Gipsy Rondo." The last statement of the theme is marked Prestissimo, and the movement closes at breakneck speed.
Quartet in B-flat major, K. 458 ("The Hunt")
..........Wolfgang Amadeus Mozart
Twentieth-century composers have no corner on the "modern" music market. Most of the older music accepted today as standard concert fare was "modern" in its day, and the term carried the same disparaging connotations ("difficult," or "affectedly dissonant") as it is apt to carry today. A Beethoven symphony, a Wagnerian opera, Debussy's piano pieces -all were more roundly hissed than cheered at their first performances. The present "Hunt" Quartet of Mozart was one of a series which evoked the same sort of shocked reaction. Between 1782 and 1786 Mozart wrote six string quartets which he dedicated to Joseph Haydn, of which the "Hunt" was the third. They were not at all well received. One critic characterized them as being "much too highly spiced," and published copies were returned angrily to the Viennese publishers, Artaria, with the complaint that they were inexcusably full of typographical errors!
The "Hunt" Quartet acquired its nickname from the opening theme of the first movement, with its hint of a hunting-call. The second movement is a Minuet, the third a long-breathed Adagio. The breezy mood of the opening movement is recaptured in the last.