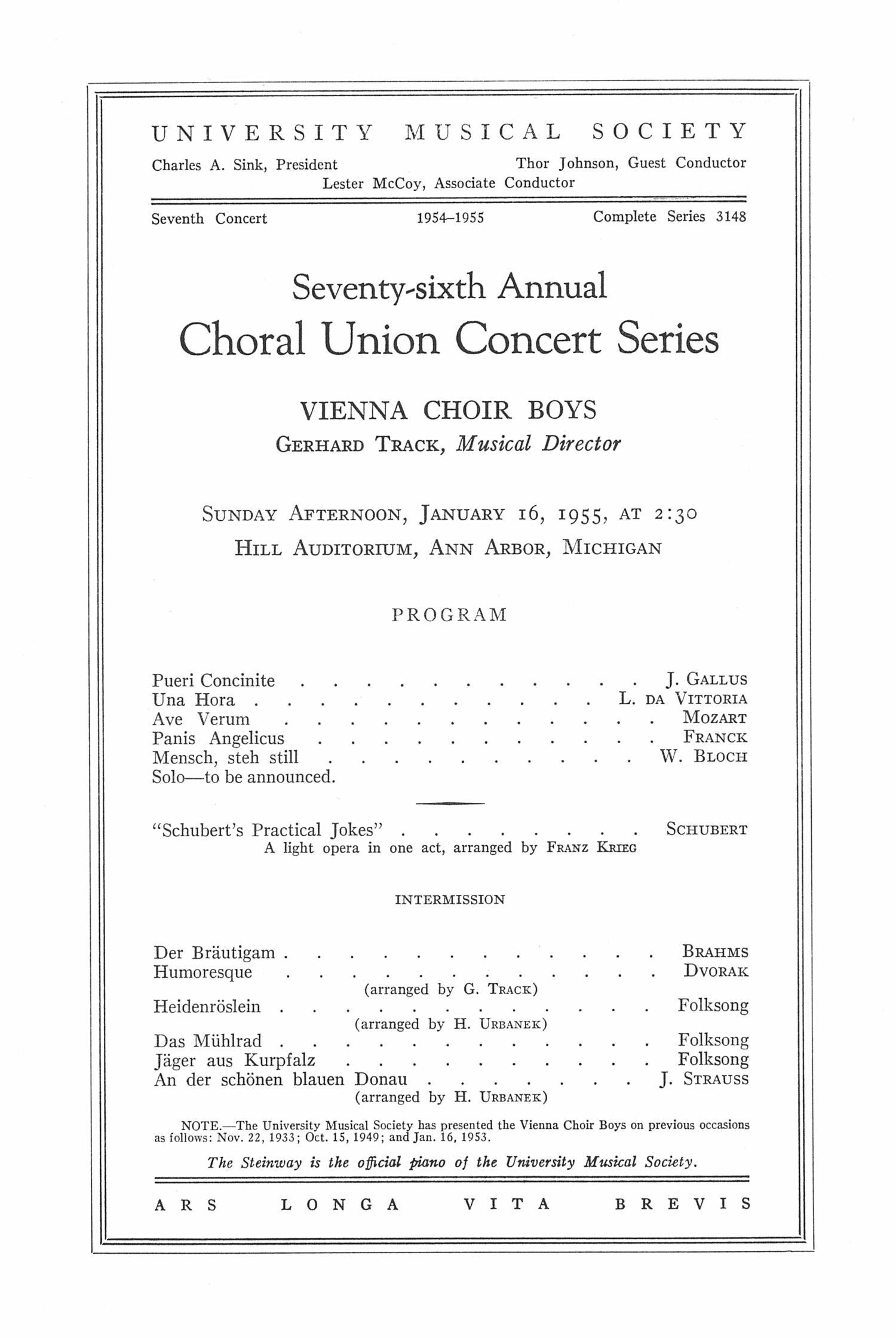 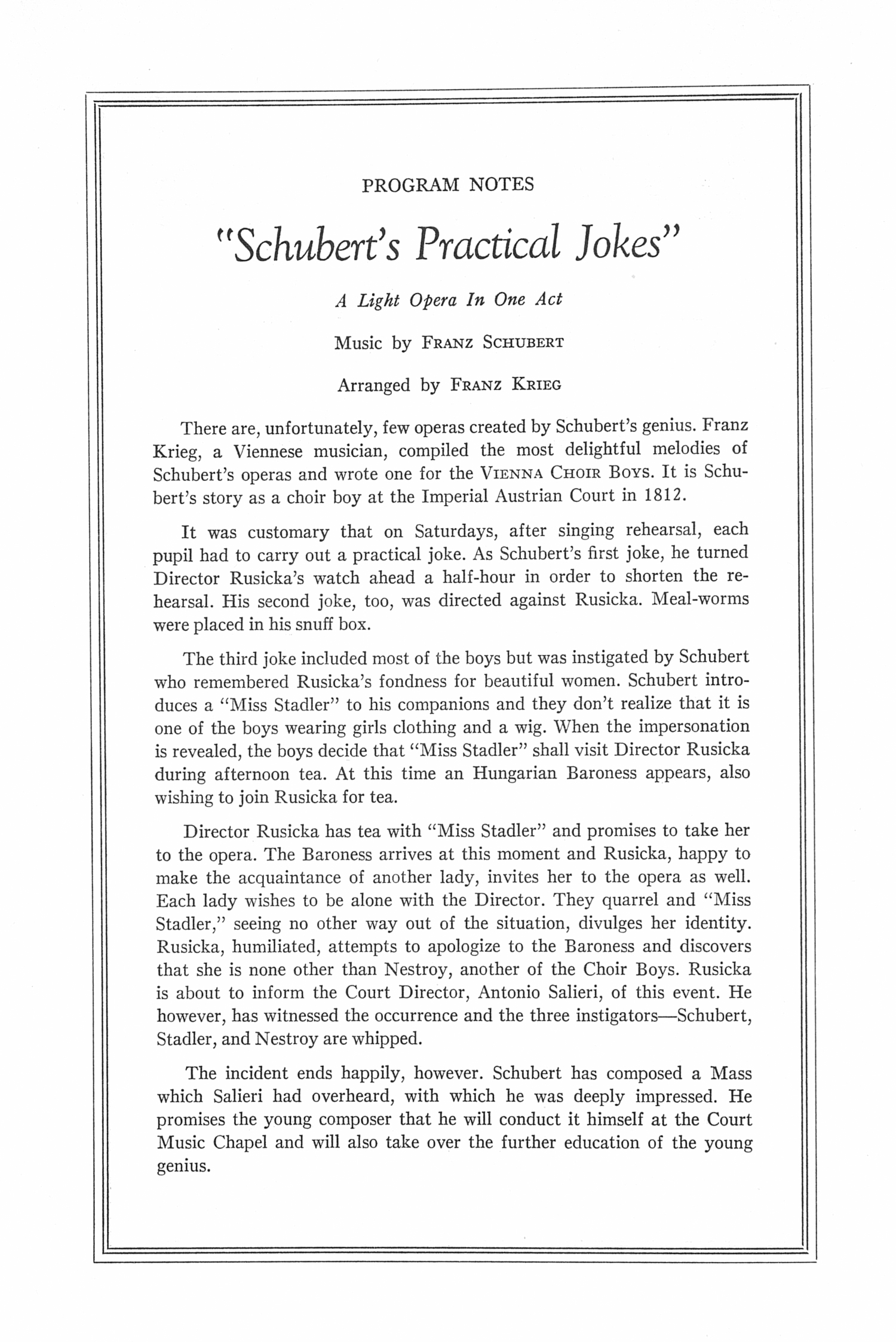 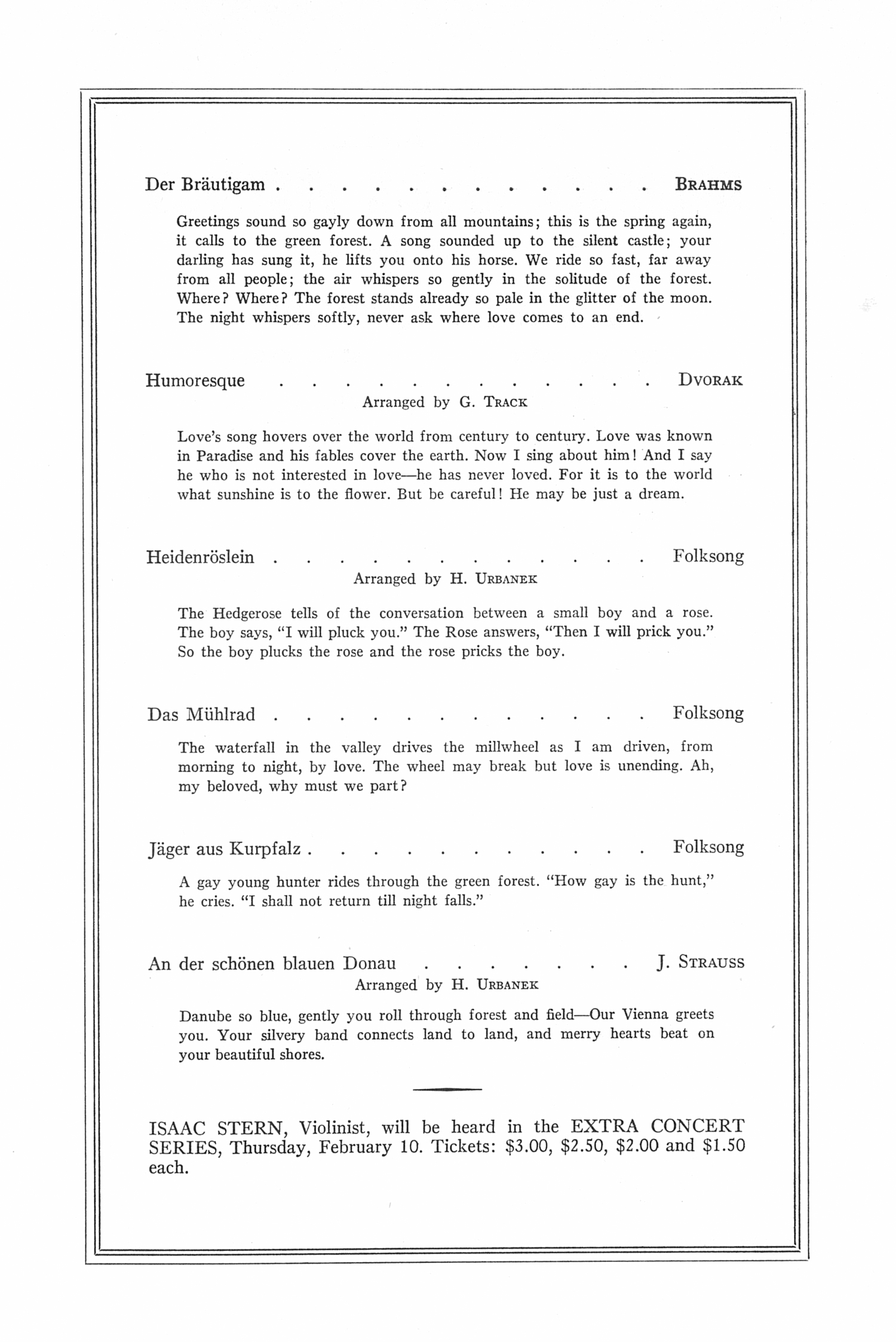 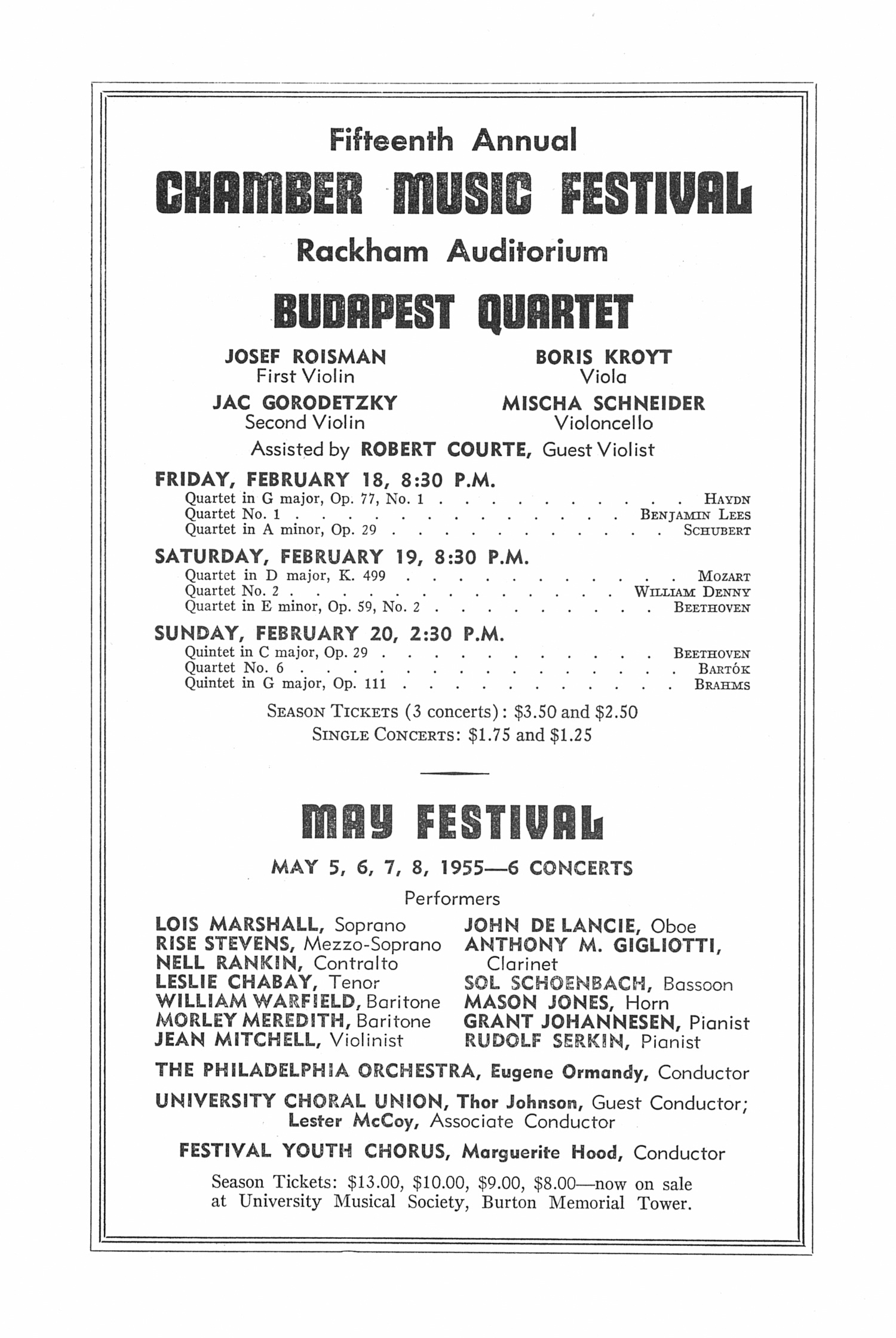 UNIVERSITY MUSICAL SOCIETY
Charles A. Sink, President Thor Johnson, Guest Conductor
Lester McCoy, Associate Conductor
Seventh Concert 1954-1955 Complete Series 3148
Seventy-sixth Annual
Choral Union Concert Series
VIENNA CHOIR BOYS Gerhard Track, Musical Director
Sunday Afternoon, January 16, 1955, at 2:30 Hill Auditorium, Ann Arbor, Michigan
PROGRAM
Pueri Concinite...........J. Gallus
Una Hora...........L. da Vittoeia
Ave Verum............Mozart
Panis Angelicus...........Franck
Mensch, steh still..........W. Bloch
Solo--to be announced.
"Schubert's Practical Jokes"........Schubert
A light opera in one act, arranged by Franz Kmeg
INTERMISSION
Der Brautigam............ Brahms
Humoresque............ Dvorak
(arranged by G. Track)
Heidenroslein............ Folksong
(arranged by H. Urbanek)
Das Miihlrad............ Folksong
Jager aus Kurpfalz.......... Folksong
An der schonen blauen Donau.......J. Strauss
(arranged by H. Urbanek)
NOTE.--The University Musical Society has presented the Vienna Choir Boys on previous occasions as follows: Nov. 22, 1933; Oct. 15, 1949; and Jan. 16, 1953.
The Steinway is the official piano o) the University Musical Society. ARS LONGA VITA BREVIS
PROGRAM NOTES
"Schubert's Practical Jokes"
A Light Opera In One Act Music by Franz Schubert Arranged by Franz Krieg
There are, unfortunately, few operas created by Schubert's genius. Franz Krieg, a Viennese musician, compiled the most delightful melodies of Schubert's operas and wrote one for the Vienna Choir Boys. It is Schu?bert's story as a choir boy at the Imperial Austrian Court in 1812.
It was customary that on Saturdays, after singing rehearsal, each pupil had to carry out a practical joke. As Schubert's first joke, he turned Director Rusicka's watch ahead a half-hour in order to shorten the re?hearsal. His second joke, too, was directed against Rusicka. Meal-worms were placed in his snuff box.
The third joke included most of the boys but was instigated by Schubert who remembered Rusicka's fondness for beautiful women. Schubert intro?duces a "Miss Stadler" to his companions and they don't realize that it is one of the boys wearing girls clothing and a wig. When the impersonation is revealed, the boys decide that "Miss Stadler" shall visit Director Rusicka during afternoon tea. At this time an Hungarian Baroness appears, also wishing to join Rusicka for tea.
Director Rusicka has tea with "Miss Stadler" and promises to take her to the opera. The Baroness arrives at this moment and Rusicka, happy to make the acquaintance of another lady, invites her to the opera as well. Each lady wishes to be alone with the Director. They quarrel and "Miss Stadler," seeing no other way out of the situation, divulges her identity. Rusicka, humiliated, attempts to apologize to the Baroness and discovers that she is none other than Nestroy, another of the Choir Boys. Rusicka is about to inform the Court Director, Antonio Salieri, of this event. He however, has witnessed the occurrence and the three instigators--Schubert, Stadler, and Nestroy are whipped.
The incident ends happily, however. Schubert has composed a Mass which Salieri had overheard, with which he was deeply impressed. He promises the young composer that he will conduct it himself at the Court Music Chapel and will also take over the further education of the young genius.
Der Brautigam............Brahms
Greetings sound so gayly down from all mountains; this is the spring again, it calls to the green forest. A song sounded up to the silent castle; your darling has sung it, he lifts you onto his horse. We ride so fast, far away from all people; the air whispers so gently in the solitude of the forest. Where Where The forest stands already so pale in the glitter of the moon. The night whispers softly, never ask where love comes to an end.
Humoresque............Dvorak
Arranged by G. Track
Love's song hovers over the world from century to century. Love was known in Paradise and his fables cover the earth. Now I sing about him! And I say he who is not interested in love--he has never loved. For it is to the world what sunshine is to the flower. But be careful! He may be just a dream.
Heidenroslein............Folksong
Arranged by H. Urbanek
The Hedgerose tells of the conversation between a small boy and a rose. The boy says, "I will pluck you." The Rose answers, "Then I will prick you." So the boy plucks the rose and the rose pricks the boy.
Das Miihlrad............Folksong
The waterfall in the valley drives the millwheel as I am driven, from morning to night, by love. The wheel may break but love is unending. Ah, my beloved, why must we part
Jager aus Kurpfalz...........Folksong
A gay young hunter rides through the green forest. "How gay is the hunt," he cries. "I shall not return till night falls."
An der schonen blauen Donau.......J. Strauss
Arranged by H. Urbanek
Danube so blue, gently you roll through forest and field--Our Vienna greets you. Your silvery band connects land to land, and merry hearts beat on your beautiful shores.
ISAAC STERN, Violinist, will be heard in the EXTRA CONCERT SERIES, Thursday, February 10. Tickets: $3.00, $2.50, $2.00 and $1.50 each.
Fifteenth Annual
CHRHIBER HIUSIC FESTIVAL
Rackham Auditorium
BUDRPEST qUHRTET
JOSEF ROISMAN BORIS KROYT
First Violin Viola
JAC GORODETZKY MISCHA SCHNEIDER
Second Violin Violoncello
Assisted by ROBERT COURTE, Guest Violist
FRIDAY, FEBRUARY 18, 8:30 P.M.
Quartet in G major, Op. 77, No. 1..........Haydn
Quartet No. 1.............Benjamin Lees
Quartet in A minor, Op. 29...........Schubert
SATURDAY, FEBRUARY 19, 8:30 P.M.
Quartet in D major, K. 499...........Mozart
Quartet No. 2.............WnxiAM Denny
Quartet in E minor, Op. 59, No. 2.........Beethoven
SUNDAY, FEBRUARY 20, 2:30 P.M.
Quintet in C major, Op. 29...........Beethoven
Quartet No. 6...............Bartok
Quintet in G major, Op. Ill...........Brahms
Season Tickets (3 concerts): $3.50 and $2.50 Single Concerts: $1.75 and $1.25
mny festiuhii
MAY 5, 6, 7, 8, 1955--6 CONCERTS
Performers
LOIS MARSHALL, Soprano JOHN DE LANCIE, Oboe
RISE STEVENS, Mezzo-Soprano ANTHONY M. GIGLIOTTI, NELL RANKIN, Contralto Clarinet
LESLIE CHABAY, Tenor SOL SCHOENBACH, Bassoon
WILLIAM WARFSELD, Baritone MASON JONES, Horn
MORLEY MEREDITH, Baritone GRANT JOHANNESEN, Pianist
JEAN MITCHELL, Violinist RUDOLF SERKSN, Pianist
THE PHILADELPHIA ORCHESTRA, Eugene Ormandy, Conductor
UNIVERSITY CHORAL UNION, Thor Johnson, Guest Conductor; Lester McCoy, Associate Conductor
FESTIVAL YOUTH CHORUS, Marguerite Hood, Conductor
Season Tickets: $13.00, $10.00, $9.00, $8.00--now on sale at University Musical Society, Burton Memorial Tower.