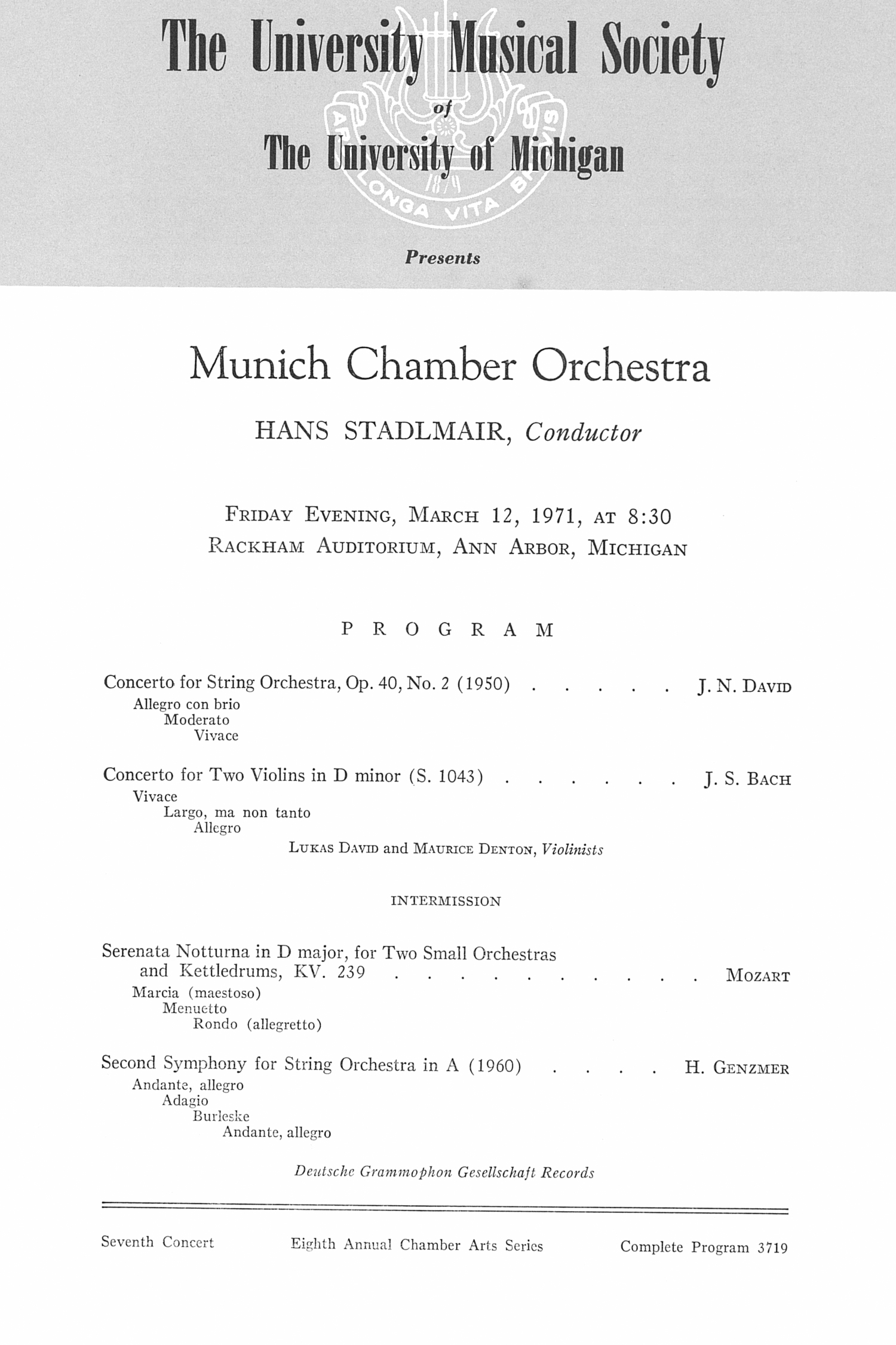 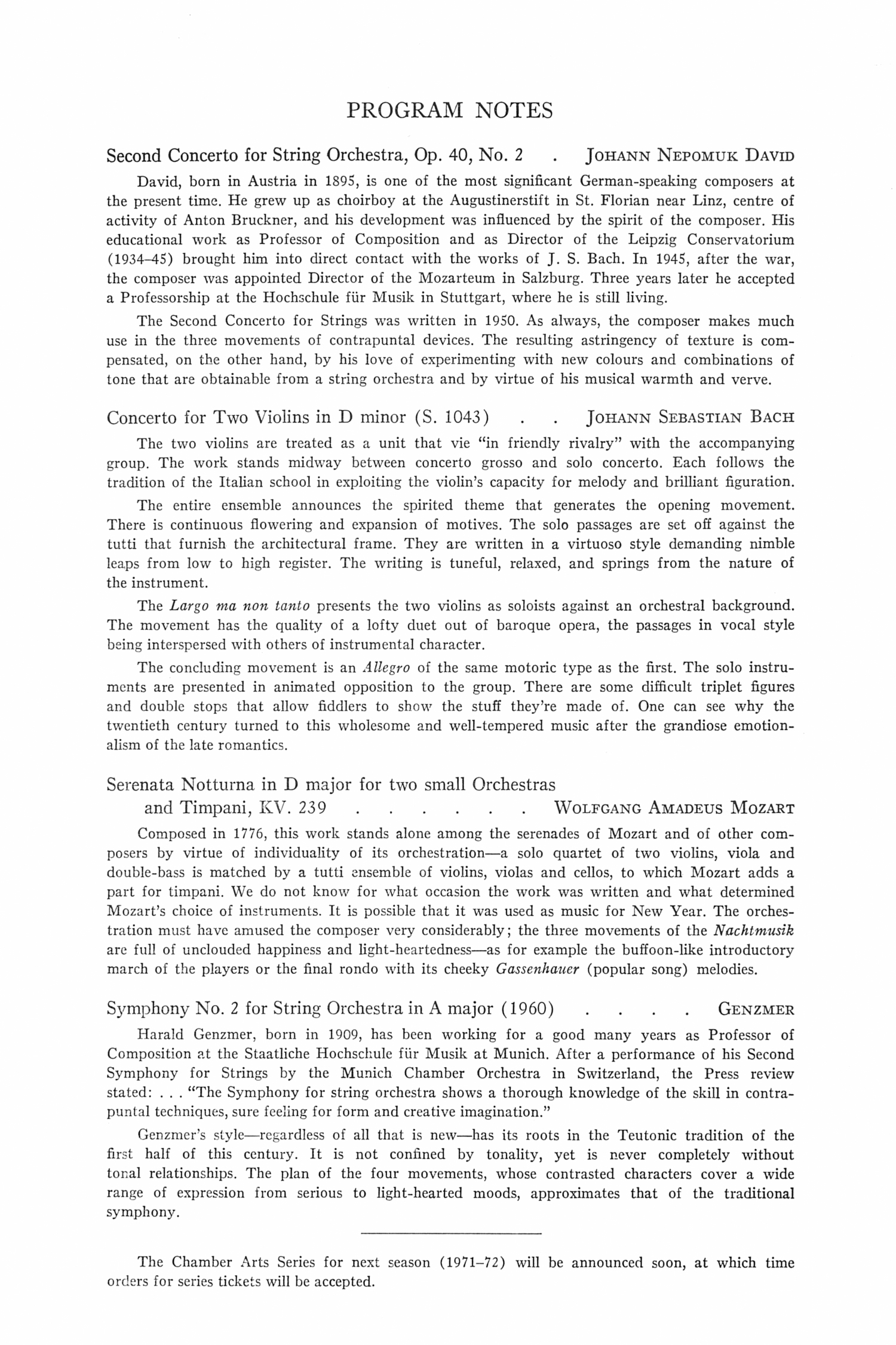 The University Musical Society
of
The University of Michigan
Presents
Munich Chamber Orchestra
HANS STADLMAIR, Conductor
Friday Evening, March 12, 1971, at 8:30 Rackham Auditorium, Ann Arbor, Michigan
PROGRAM
Concerto for String Orchestra, Op. 40, No. 2 (1950) .
Allegro con brio Moderato Vivace
Concerto for Two Violins in D minor (S. 1043) . . . .
Vivace
Largo, ma non tanto Allegro
Lukas David and Maurice Denton, Violinists
J. N. David
J. S. Bach
INTERMISSION
Serenata Notturna in D major, for Two Small Orchestras
and Kettledrums, KV. 239.......
Marcia (maestoso) Menuetto
Rondo (allegretto)
Second Symphony for String Orchestra in A (1960) Andante, allegro Adagio
Burleske
Andante, allegro
Deutsche Grammophon Gcsellschajt Records
Mozart
H. Genzmer
Seventh Concert
Eighth Annual Chamber Arts Scries
Complete Program 3719
PROGRAM NOTES
Second Concerto for String Orchestra, Op. 40, No. 2 . Johann Nepomuk David
David, born in Austria in 1895, is one of the most significant Germanspeaking composers at the present time. He grew up as choirboy at the Augustinerstift in St. Florian near Linz, centre of activity of Anton Bruckner, and his development was influenced by the spirit of the composer. His educational work as Professor of Composition and as Director of the Leipzig Conservatorium (1934--45) brought him into direct contact with the works of J. S. Bach. In 1945, after the war, the composer was appointed Director of the Mozarteum in Salzburg. Three years later he accepted a Professorship at the Hochschule fiir Musik in Stuttgart, where he is still living.
The Second Concerto for Strings was written in 1950. As always, the composer makes much use in the three movements of contrapuntal devices. The resulting astringency of texture is com?pensated, on the other hand, by his love of experimenting with new colours and combinations of tone that are obtainable from a string orchestra and by virtue of his musical warmth and verve.
Concerto for Two Violins in D minor (S. 1043) . . Johann Sebastian Bach
The two violins arc treated as a unit that vie "in friendly rivalry" with the accompanying group. The work stands midway between concerto grosso and solo concerto. Each follows the tradition of the Italian school in exploiting the violin's capacity for melody and brilliant figuration.
The entire ensemble announces the spirited theme that generates the opening movement. There is continuous flowering and expansion of motives. The solo passages are set off against the tutti that furnish the architectural frame. They are written in a virtuoso style demanding nimble leaps from low to high register. The writing is tuneful, relaxed, and springs from the nature of the instrument.
The Largo ma non tanto presents the two violins as soloists against an orchestral background. The movement has the quality of a lofty duet out of baroque opera, the passages in vocal style being interspersed with others of instrumental character.
The concluding movement is an Allegro of the same motoric type as the first. The solo instru?ments are presented in animated opposition to the group. There are some difficult triplet figures and double stops that allow fiddlers to show the stuff they're made of. One can see why the twentieth century turned to this wholesome and welltempered music after the grandiose emotion?alism of the late romantics.
Serenata Notturna in D major for two small Orchestras
and Timpani, KV. 239......Wolfgang Amadeus Mozart
Composed in 1776, this work stands alone among the serenades of Mozart and of other com?posers by virtue of individuality of its orchestration--a solo quartet of two violins, viola and doublebass is matched by a tutti ensemble of violins, violas and cellos, to which Mozart adds a part for timpani. We do not know for what occasion the work was written and what determined Mozart's choice of instruments. It is possible that it was used as music for New Year. The orches?tration must have amused the composer very considerably; the three movements of the Nachtmusik are full of unclouded happiness and lightheartedness--as for example the buffoonlike introductory march of the players or the final rondo with its cheeky Gasscnhaucr (popular song) melodies.
Symphony No. 2 for String Orchestra in A major (1960) .... Genzmer
Harald Genzmer, born in 1909, has been working for a good many years as Professor of Composition at the Staatliche Hochschule fiir Musik at Munich. After a performance of his Second Symphony for Strings by the Munich Chamber Orchestra in Switzerland, the Press review stated: . . . "The Symphony for string orchestra shows a thorough knowledge of the skill in contra?puntal techniques, sure feeling for form and creative imagination."
Genzmcr's style--regardless of all that is new--has its roots in the Teutonic tradition of the first half of this century. It is not confined by tonality, yet is never completely without tonal relationships. The plan of the four movements, whose contrasted characters cover a wide range of expression from serious to lighthearted moods, approximates that of the traditional symphony.
The Chamber Arts Series for next season (197172) will be announced soon, at which time orders for series tickets will be accepted.