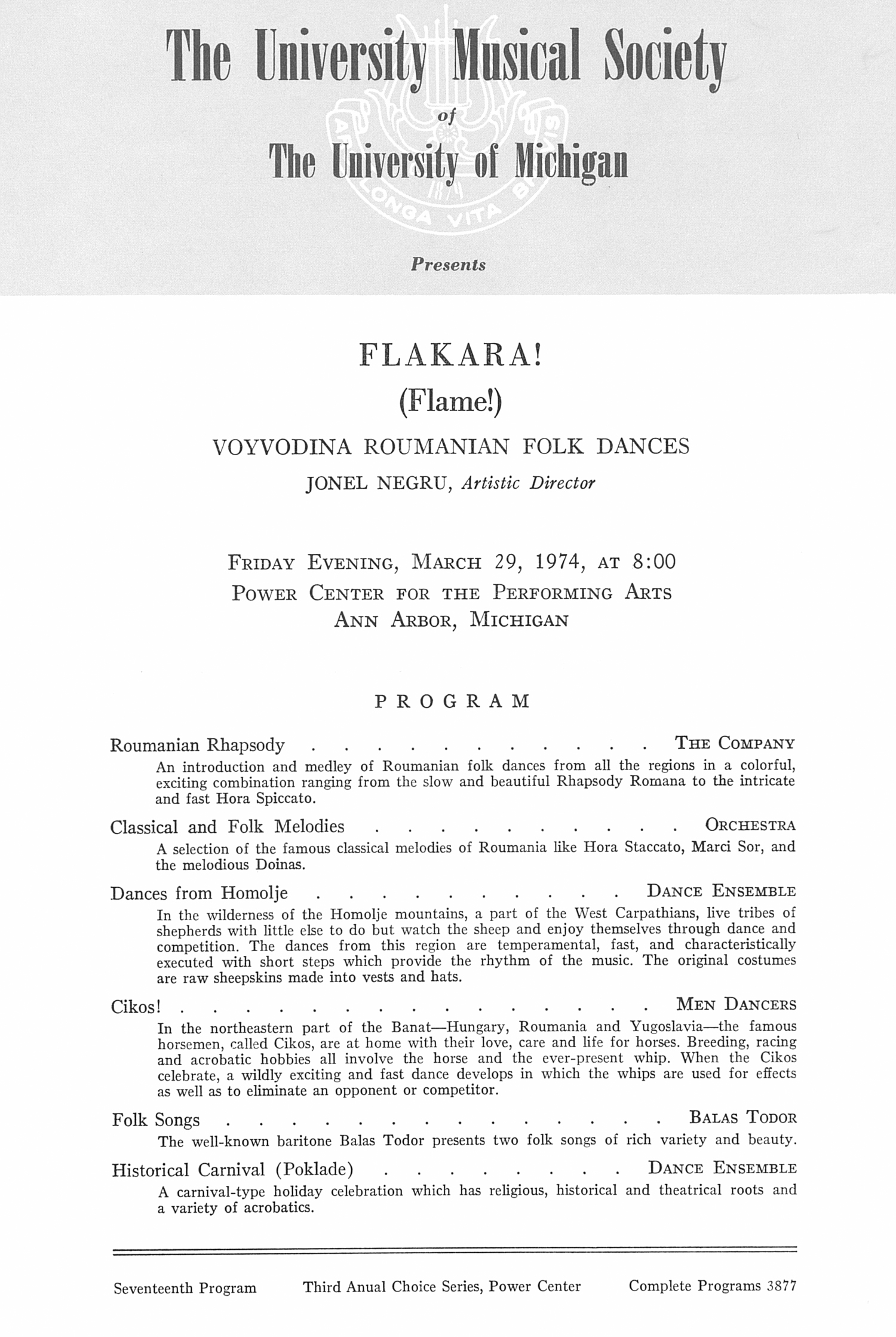 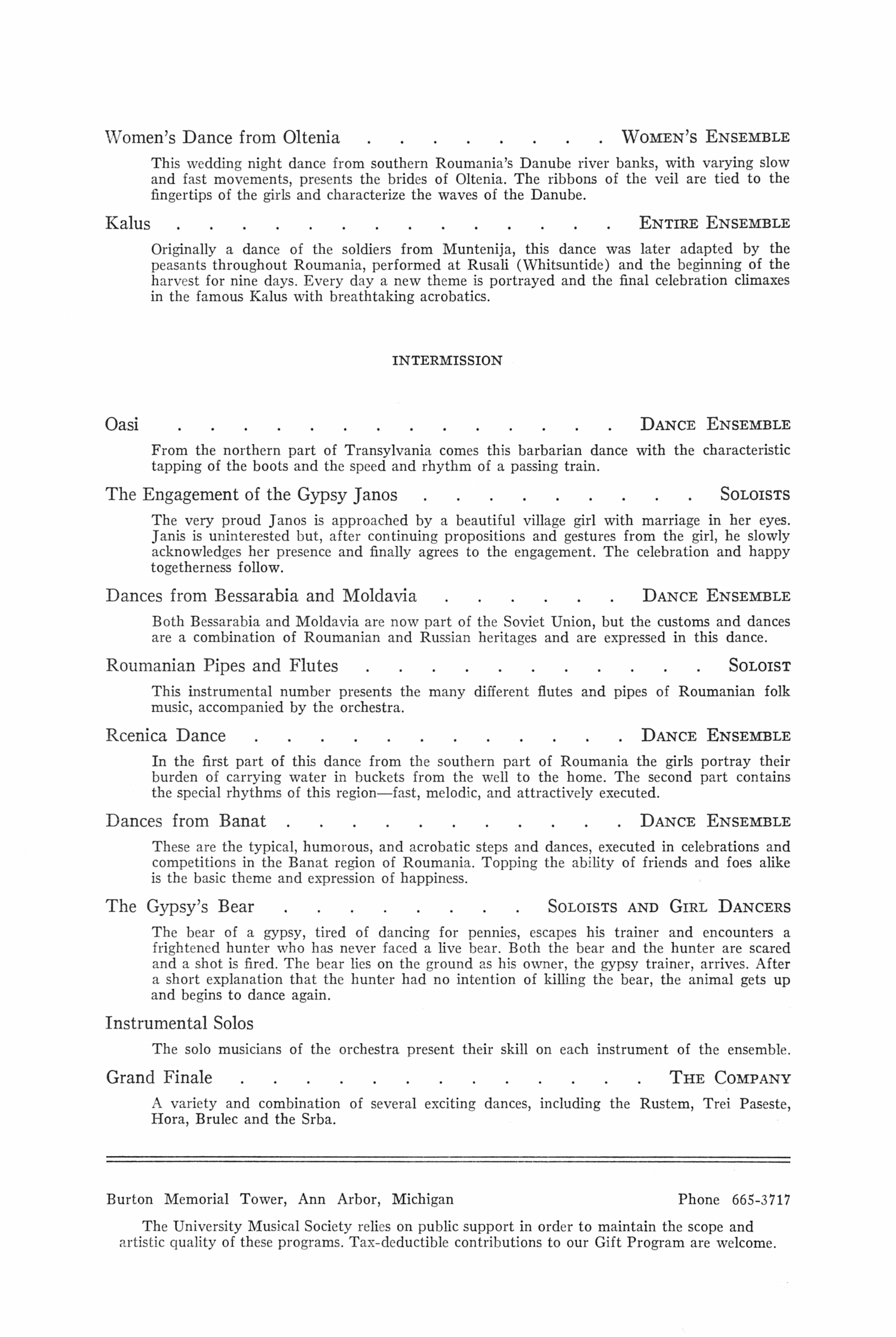 The University Musical Society
of
The University of Michigan
Presents
FLAKARA! (Flame!)
VOYVODINA ROUMANIAN FOLK DANCES JONEL NEGRU, Artistic Director
Friday Evening, March 29, 1974, at 8:00
Power Center for the Performing Arts
Ann Arbor, Michigan
PROGRAM
Roumanian Rhapsody...........The Company
An introduction and medley of Roumanian folk dances from all the regions in a colorful, exciting combination ranging from the slow and beautiful Rhapsody Romana to the intricate and fast Hora Spiccato.
Classical and Folk Melodies..........Orchestra
A selection of the famous classical melodies of Roumania like Hora Staccato, Marci Sor, and the melodious Doinas.
Dances from Homolje..........Dance Ensemble
In the wilderness of the Homolje mountains, a part of the West Carpathians, live tribes of shepherds with little else to do but watch the sheep and enjoy themselves through dance and competition. The dances from this region are temperamental, fast, and characteristically executed with short steps which provide the rhythm of the music. The original costumes are raw sheepskins made into vests and hats.
Cikos!...............Men Dancers
In the northeastern part of the Banat--Hungary, Roumania and Yugoslavia--the famous horsemen, called Cikos, arc at home with their love, care and life for horses. Breeding, racing and acrobatic hobbies all involve the horse and the everpresent whip. When the Cikos celebrate, a wildly exciting and fast dance develops in which the whips are used for effects as well as to eliminate an opponent or competitor.
Folk Songs..............Balas Todor
The wellknown baritone Balas Todor presents two folk songs of rich variety and beauty.
Historical Carnival (Poklade)........Dance Ensemble
A carnivaltype holiday celebration which has religious, historical and theatrical roots and a variety of acrobatics.
Seventeenth Program Third Anual Choice Series, Power Center Complete Programs 3877
Women's Dance from Oltenia........Women's Ensemble
This wedding night dance from southern Roumania's Danube river banks, with varying slow and fast movements, presents the brides of Oltenia. The ribbons of the veil are tied to the fingertips of the girls and characterize the waves of the Danube.
Kalus..............Entire Ensemble
Originally a dance of the soldiers from Muntenija, this dance was later adapted by the peasants throughout Roumania, performed at Rusali (Whitsuntide) and the beginning of the harvest for nine days. Every day a new theme is portrayed and the final celebration climaxes in the famous Kalus with breathtaking acrobatics.
INTERMISSION
Oasi..............Dance Ensemble
From the northern part of Transylvania comes this barbarian dance with the characteristic tapping of the boots and the speed and rhythm of a passing train.
The Engagement of the Gypsy Janos.........Soloists
The very proud Janos is approached by a beautiful village girl with marriage in her eyes. Janis is uninterested but, after continuing propositions and gestures from the girl, he slowly acknowledges her presence and finally agrees to the engagement. The celebration and happy togetherness follow.
Dances from Bessarabia and Moldavia......Dance Ensemble
Both Bessarabia and Moldavia are now part of the Soviet Union, but the customs and dances are a combination of Roumanian and Russian heritages and are expressed in this dance.
Roumanian Pipes and Flutes...........Soloist
This instrumental number presents the many different flutes and pipes of Roumanian folk music, accompanied by the orchestra.
Rcenica Dance............Dance Ensemble
In the first part of this dance from the southern part of Roumania the girls portray their burden of carrying water in buckets from the well to the home. The second part contains the special rhythms of this region--fast, melodic, and attractively executed.
Dances from Banat...........Dance Ensemble
These are the typical, humorous, and acrobatic steps and dances, executed in celebrations and competitions in the Banat region of Roumania. Topping the ability of friends and foes alike is the basic theme and expression of happiness.
The Gypsy's Bear........Soloists and Girl Dancers
The bear of a gypsy, tired of dancing for pennies, escapes his trainer and encounters a frightened hunter who has never faced a live bear. Both the bear and the hunter are scared and a shot is fired. The bear lies on the ground as his owner, the gypsy trainer, arrives. After a short explanation that the hunter had no intention of killing the bear, the animal gets up and begins to dance again.
Instrumental Solos
The solo musicians of the orchestra present their skill on each instrument of the ensemble.
Grand Finale.............The Company
A variety and combination of several exciting dances, including the Rustem, Trei Paseste, Hora, Brulec and the Srba.
Burton Memorial Tower, Ann Arbor, Michigan Phone 6653717
The University Musical Society relics on public support in order to maintain the scope and artistic quality of these programs. Taxdeductible contributions to our Gift Program are welcome.