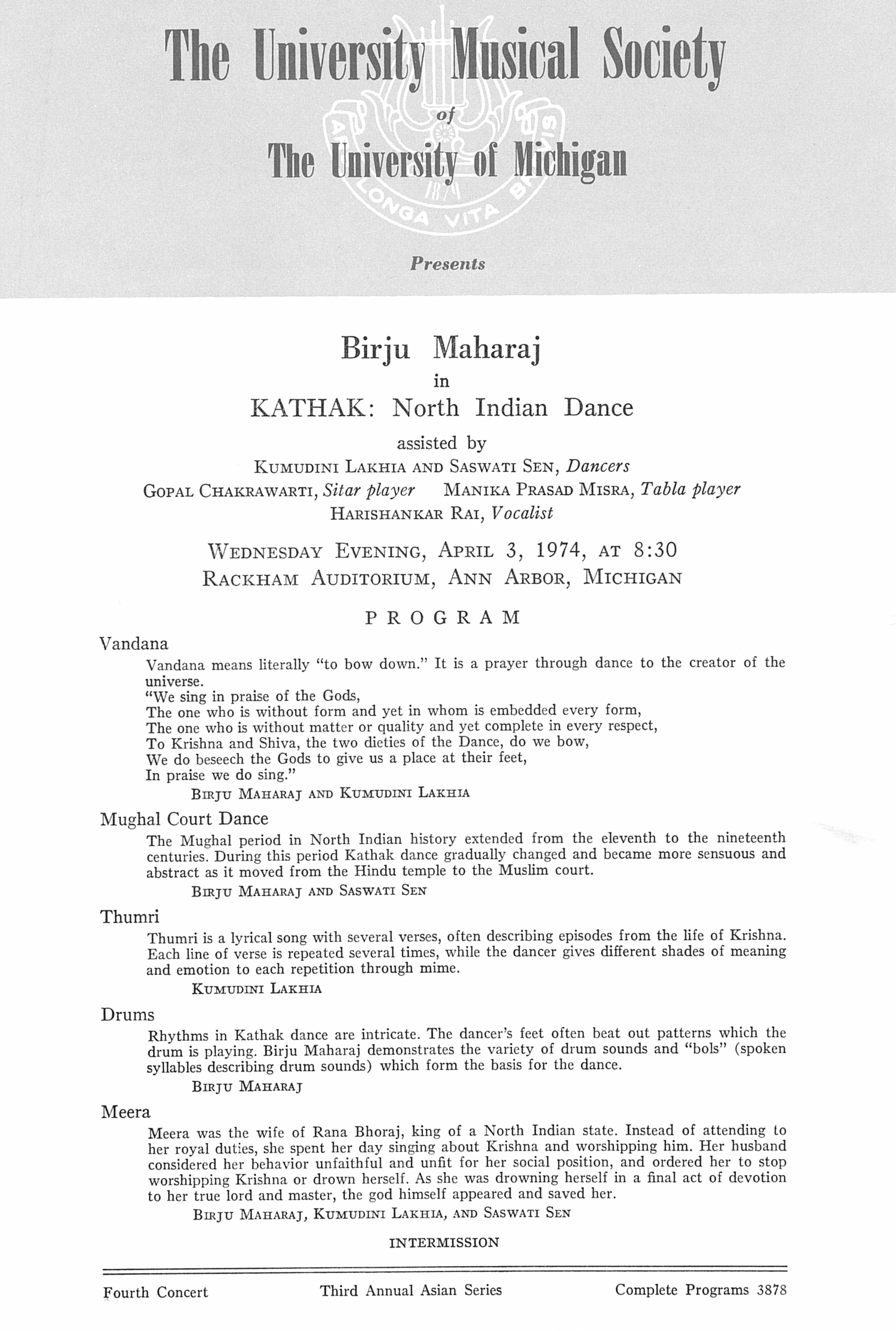 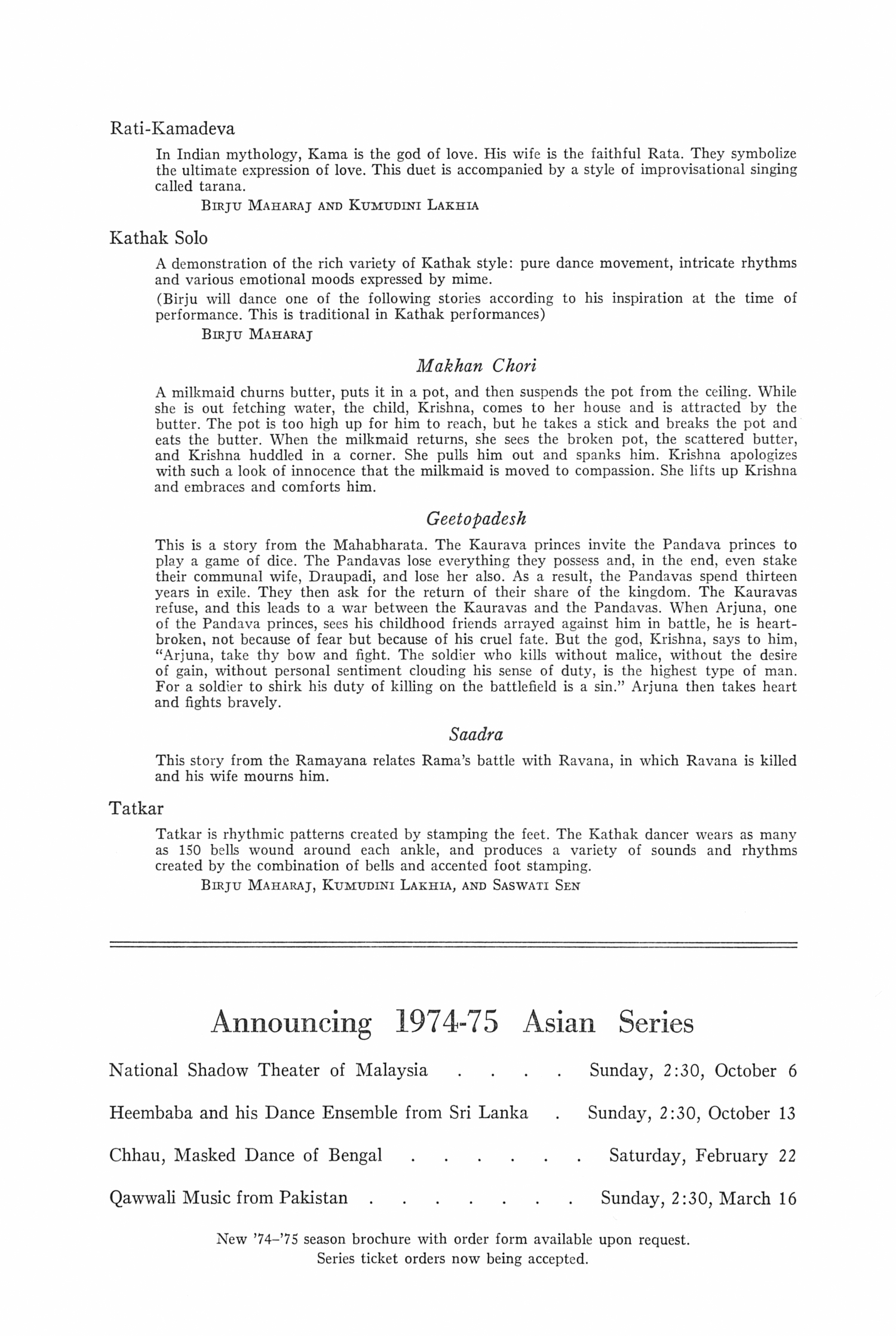 The University Musical Society
of
The University of Michigan
Presents
Birju Maharaj
in
KATHAK: North Indian Dance
assisted by
Kumudini Lakhia and Saswati Sen, Dancers
Gopal Chakrawarti, Sitar player Manika Prasad Misra, Tabla player Harishankar Rai, Vocalist
Wednesday Evening, April 3, 1974, at 8:30 Rackham Auditorium, Ann Arbor, Michigan
PROGRAM
Yandana
Vandana means literally "to bow down." It is a prayer through dance to the creator of the
universe.
"We sing in praise of the Gods,
The one who is without form and yet in whom is embedded every form,
The one who is without matter or quality and yet complete in every respect,
To Krishna and Shiva, the two dieties of the Dance, do we bow,
We do beseech the Gods to give us a place at their feet.
In praise we do sing."
Birju Maharaj and Kumudini Lakhia
Mughal Court Dance
The Mughal period in North Indian history extended from the eleventh to the nineteenth centuries. During this period Kathak dance gradually changed and became more sensuous and abstract as it moved from the Hindu temple to the Muslim court. Birju Maharaj and Saswati Sen
Thumri
Thumri is a lyrical song with several verses, often describing episodes from the life of Krishna. Each line of verse is repeated several times, while the dancer gives different shades of meaning and emotion to each repetition through mime. Kumudini Lakhia
Drums
Rhythms in Kathak dance are intricate. The dancer's feet often beat out patterns which the drum is playing. Birju Maharaj demonstrates the variety of drum sounds and "bols" (spoken syllables describing drum sounds) which form the basis for the dance. Birju Maharaj
Meera
Meera was the wife of Rana Bhoraj, king of a North Indian state. Instead of attending to her royal duties, she spent her day singing about Krishna and worshipping him. Her husband considered her behavior unfaithful and unfit for her social position, and ordered her to stop worshipping Krishna or drown herself. As she was drowning herself in a final act of devotion to her true lord and master, the god himself appeared and saved her. Birju Maiiaraj, Kumudini Lakhia, and Saswati Sen
INTERMISSION Fourth Concert Third Annual Asian Series Complete Programs 3878
RatiKamadeva
In Indian mythology, Kama is the god of love. His wife is the faithful Rata. They symbolize the ultimate expression of love. This duet is accompanied by a style of improvisational singing called tarana.
Birju Maharaj and Kumudini Lakhia
Kathak Solo
A demonstration of the rich variety of Kathak style: pure dance movement, intricate rhythms and various emotional moods expressed by mime.
(Birju will dance one of the following stories according to his inspiration at the time of performance. This is traditional in Kathak performances) Birju Maharaj
Makhan Chori
A milkmaid churns butter, puts it in a pot, and then suspends the pot from the ceiling. While she is out fetching water, the child, Krishna, comes to her house and is attracted by the butter. The pot is too high up for him to reach, but he takes a stick and breaks the pot and eats the butter. When the milkmaid returns, she sees the broken pot, the scattered butter, and Krishna huddled in a corner. She pulls him out and spanks him. Krishna apologizes with such a look of innocence that the milkmaid is moved to compassion. She lifts up Krishna and embraces and comforts him.
Geetopadesk
This is a story from the Mahabharata. The Kaurava princes invite the Pandava princes to play a game of dice. The Pandavas lose everything they possess and, in the end, even stake their communal wife, Draupadi, and lose her also. As a result, the Pandavas spend thirteen years in exile. They then ask for the return of their share of the kingdom. The Kauravas refuse, and this leads to a war between the Kauravas and the Pandavas. When Arjuna, one of the Pandava princes, sees his childhood friends arrayed against him in battle, he is heart?broken, not because of fear but because of his cruel fate. But the god, Krishna, says to him, "Arjuna, take thy bow and fight. The soldier who kills without malice, without the desire of gain, without personal sentiment clouding his sense of duty, is the highest type of man. For a soldier to shirk his duty of killing on the battlefield is a sin." Arjuna then takes heart and fights bravely.
Saadra
This story from the Ramayana relates Rama's battle with Ravana, in which Ravana is killed and his wife mourns him.
Tatkar
Tatkar is rhythmic patterns created by stamping the feet. The Kathak dancer wears as many as ISO bells wound around each ankle, and produces a variety of sounds and rhythms created by the combination of bells and accented foot stamping. Birju Maharaj, Kumudini Lakhia, and Saswati Sen
Announcing 197475 Asian Series
National Shadow Theater of Malaysia .... Sunday, 2:30, October 6 Heembaba and his Dance Ensemble from Sri Lanka . Sunday, 2:30, October 13
Chhau, Masked Dance of Bengal......Saturday, February 22
Qawwali Music from Pakistan.......Sunday, 2:30, March 16
New '74'75 season brochure with order form available upon request. Series ticket orders now being accepted.