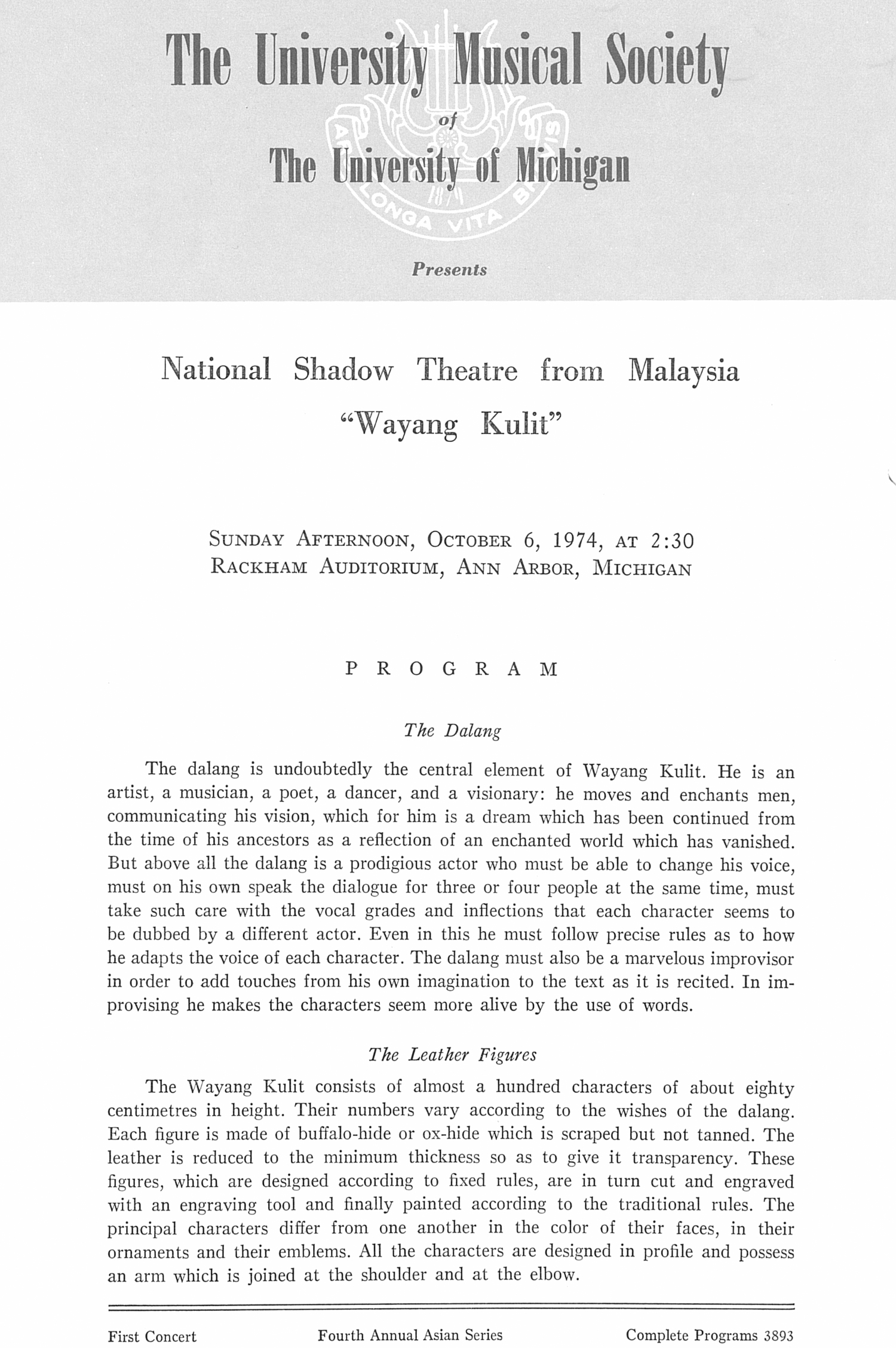 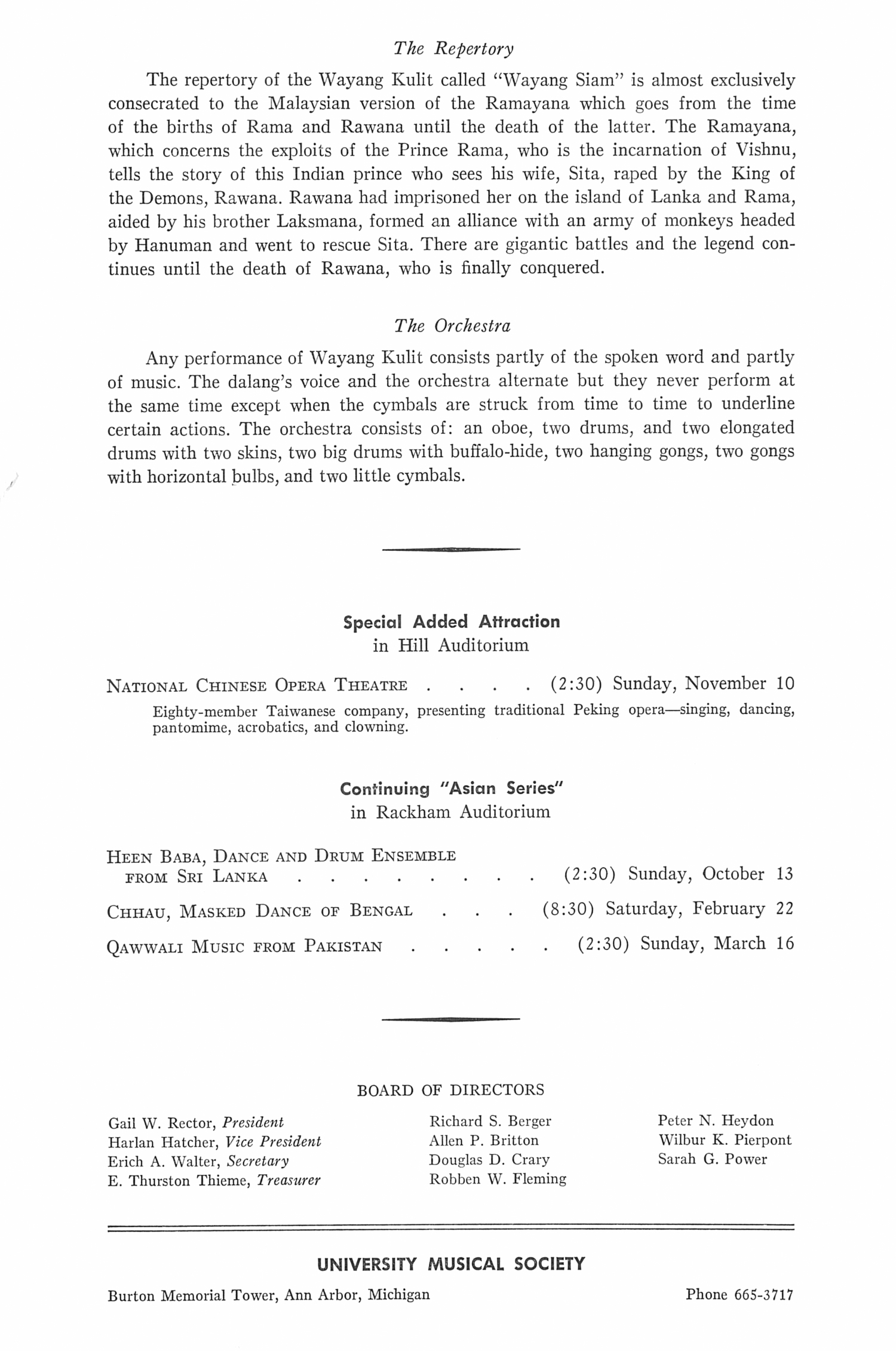 The University Musical Society
of
The University of Michigan
Presents
National Shadow Theatre from Malaysia "Wayang Kulit"
Sunday Afternoon, October 6, 1974, at 2:30 Rackham Auditorium, Ann Arbor, Michigan
PROGRAM
The Dalang
The dalang is undoubtedly the central element of Wayang Kulit. He is an artist, a musician, a poet, a dancer, and a visionary: he moves and enchants men, communicating his vision, which for him is a dream which has been continued from the time of his ancestors as a reflection of an enchanted world which has vanished. But above all the dalang is a prodigious actor who must be able to change his voice, must on his own speak the dialogue for three or four people at the same time, must take such care with the vocal grades and inflections that each character seems to be dubbed by a different actor. Even in this he must follow precise rules as to how he adapts the voice of each character. The dalang must also be a marvelous improvisor in order to add touches from his own imagination to the text as it is recited. In im?provising he makes the characters seem more alive by the use of words.
The Leather Figures
The Wayang Kulit consists of almost a hundred characters of about eighty centimetres in height. Their numbers vary according to the wishes of the dalang. Each figure is made of buffalohide or oxhide which is scraped but not tanned. The leather is reduced to the minimum thickness so as to give it transparency. These figures, which are designed according to fixed rules, are in turn cut and engraved with an engraving tool and finally painted according to the traditional rules. The principal characters differ from one another in the color of their faces, in their ornaments and their emblems. All the characters are designed in profile and possess an arm which is joined at the shoulder and at the elbow.
First Concert Fourth Annual Asian Series Complete Programs 3893
The Repertory
The repertory of the Wayang Kulit called "Wayang Siam" is almost exclusively consecrated to the Malaysian version of the Ramayana which goes from the time of the births of Rama and Rawana until the death of the latter. The Ramayana, which concerns the exploits of the Prince Rama, who is the incarnation of Vishnu, tells the story of this Indian prince who sees his wife, Sita, raped by the King of the Demons, Rawana. Rawana had imprisoned her on the island of Lanka and Rama, aided by his brother Laksmana, formed an alliance with an army of monkeys headed by Hanuman and went to rescue Sita. There are gigantic battles and the legend con?tinues until the death of Rawana, who is finally conquered.
The Orchestra
Any performance of Wayang Kulit consists partly of the spoken word and partly of music. The dalang's voice and the orchestra alternate but they never perform at the same time except when the cymbals are struck from time to time to underline certain actions. The orchestra consists of: an oboe, two drums, and two elongated drums with two skins, two big drums with buffalohide, two hanging gongs, two gongs with horizontal bulbs, and two little cymbals.
Special Added Attraction
in Hill Auditorium
National Chinese Opera Theatre .... (2:30) Sunday, November 10
Eightymember Taiwanese company, presenting traditional Peking opera--singing, dancing, pantomime, acrobatics, and clowning.
Continuing "Asian Series"
in Rackham Auditorium
Heen Baba, Dance and Drum Ensemble from Sri Lanka........(2:30) Sunday, October 13
Chhau, Masked Dance of Bengal . . . (8:30) Saturday, February 22 Qawwali Music from Pakistan.....(2:30) Sunday, March 16
BOARD OF DIRECTORS
Gail VV. Rector, President Harlan Hatcher, Vice President Erich A. Walter, Secretary E. Thurston Thieme, Treasurer
Richard S. Bergcr Allen P. Britton Douglas D. Crary Robben W. Fleming
Peter N. Heydon Wilbur K. Pierpont Sarah G. Power
UNIVERSITY MUSICAL SOCIETY
3urton Memorial Tower, Ann Arbor, Michigan Phone 6653717