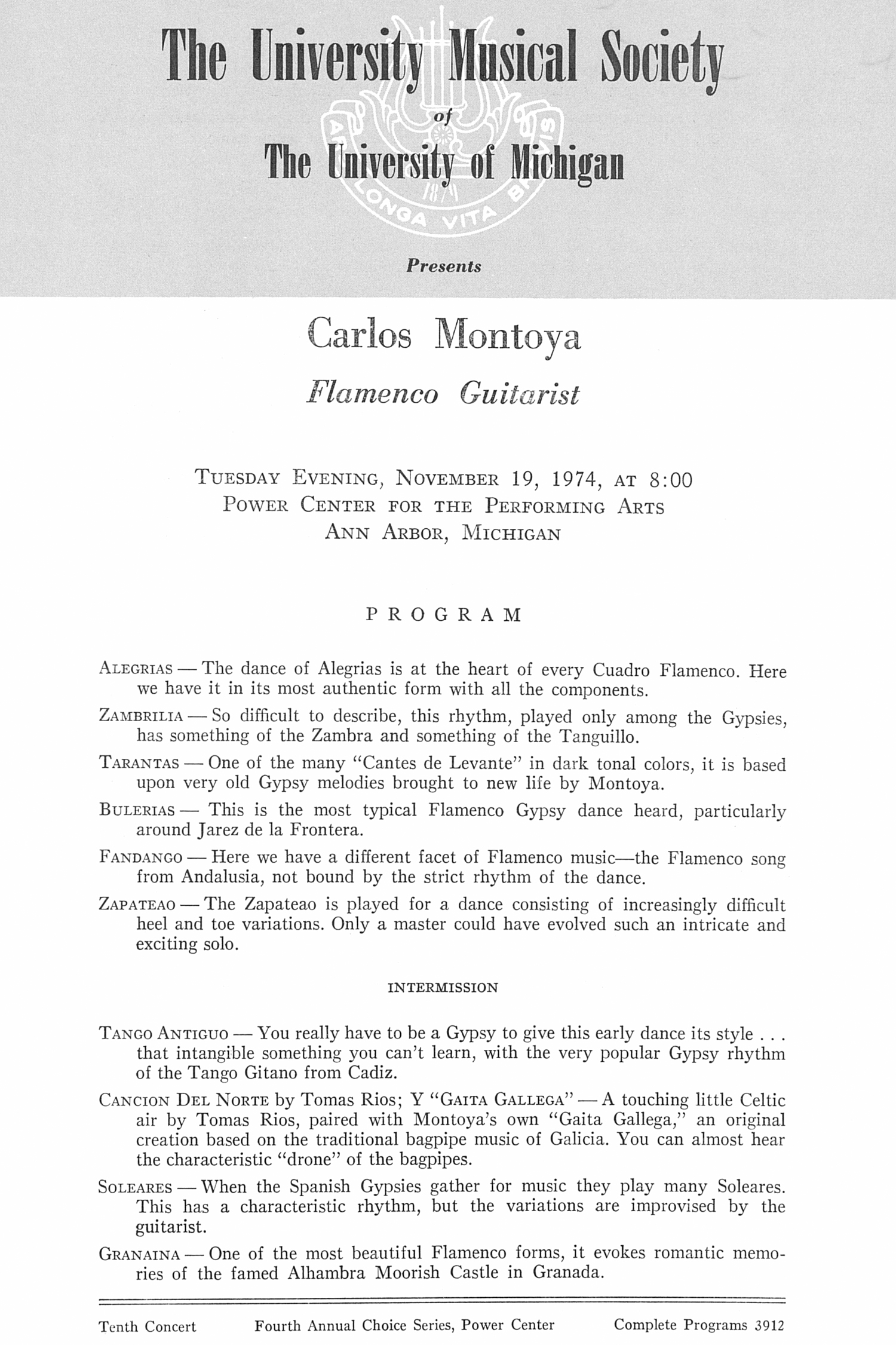 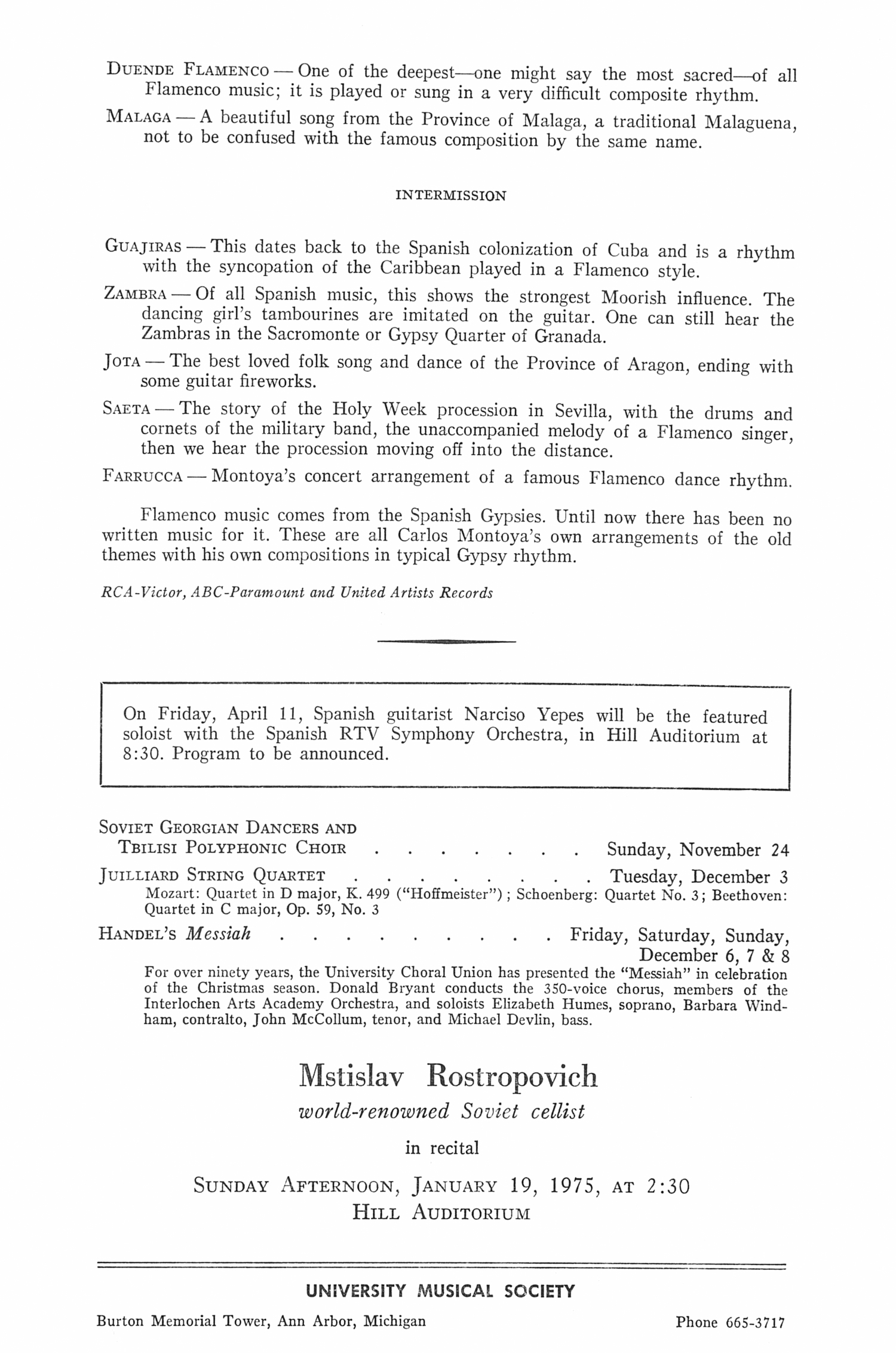 The University Musical Society
of
The University of Michigan
Presents
Carlos Montoya
Flamenco Guitarist
Tuesday Evening, November 19, 1974, at 8:00
Power Center for the Performing Arts
Ann Arbor, Michigan
PROGRAM
Alegrias -The dance of Alegrias is at the heart of every Cuadro Flamenco. Here we have it in its most authentic form with all the components.
Zambrilia -So difficult to describe, this rhythm, played only among the Gypsies, has something of the Zambra and something of the Tanguillo.
Tarantas -One of the many "Cantes de Levante" in dark tonal colors, it is based upon very old Gypsy melodies brought to new life by Montoya.
Bulerias-This is the most typical Flamenco Gypsy dance heard, particularly around Jarez de la Frontera.
Fandango -Here we have a different facet of Flamenco music--the Flamenco song from Andalusia, not bound by the strict rhythm of the dance.
Zapateao -The Zapateao is played for a dance consisting of increasingly difficult heel and toe variations. Only a master could have evolved such an intricate and exciting solo.
INTERMISSION
Tango Antiguo -You really have to be a Gypsy to give this early dance its style . . . that intangible something you can't learn, with the very popular Gypsy rhythm of the Tango Gitano from Cadiz.
Cancion Del Norte by Tomas Rios; Y "Gaita Gallega" -A touching little Celtic air by Tomas Rios, paired with Montoya's own "Gaita Gallega," an original creation based on the traditional bagpipe music of Galicia. You can almost hear the characteristic "drone" of the bagpipes.
Soleares -When the Spanish Gypsies gather for music they play many Soleares. This has a characteristic rhythm, but the variations are improvised by the guitarist.
Granaina -One of the most beautiful Flamenco forms, it evokes romantic memo?ries of the famed Alhambra Moorish Castle in Granada.
Tenth Concert Fourth Annual Choice Series, Power Center Complete Programs 3912
Duende Flamenco -One of the deepest--one might say the most sacred--of all Flamenco music; it is played or sung in a very difficult composite rhythm.
Malaga -A beautiful song from the Province of Malaga, a traditional Malaguena, not to be confused with the famous composition by the same name.
INTERMISSION
Guajiras -This dates back to the Spanish colonization of Cuba and is a rhythm with the syncopation of the Caribbean played in a Flamenco style.
Zambra -Of all Spanish music, this shows the strongest Moorish influence. The dancing girl's tambourines are imitated on the guitar. One can still hear the Zambras in the Sacromonte or Gypsy Quarter of Granada.
Jota -The best loved folk song and dance of the Province of Aragon, ending with some guitar fireworks.
Saeta -The story of the Holy Week procession in Sevilla, with the drums and cornets of the military band, the unaccompanied melody of a Flamenco singer, then we hear the procession moving off into the distance.
Farrucca -Montoya's concert arrangement of a famous Flamenco dance rhythm.
Flamenco music comes from the Spanish Gypsies. Until now there has been no written music for it. These are all Carlos Montoya's own arrangements of the old themes with his own compositions in typical Gypsy rhythm.
RCAVictor, ABCParamount and United Artists Records
On Friday, April 11, Spanish guitarist Narciso Yepes will be the featured soloist with the Spanish RTV Symphony Orchestra, in Hill Auditorium at 8:30. Program to be announced.
Soviet Georgian Dancers and Tbilisi Polyphonic Choir.......Sunday, November 24
Juilliard String Quartet........Tuesday, December 3
Mozart: Quartet in D major, K. 499 ("Hoffmeister"); Schoenberg: Quartet No. 3; Beethoven: Quartet in C major, Op. 59, No. 3
Handel's Messiah.........Friday, Saturday, Sunday,
December 6, 7 & 8
For over ninety years, the University Choral Union has presented the "Messiah" in celebration of the Christmas season. Donald Bryant conducts the 350voice chorus, members of the Interlochen Arts Academy Orchestra, and soloists Elizabeth Humes, soprano, Barbara Windham, contralto, John McCollum, tenor, and Michael Devlin, bass.
Mstislav Rostropovich
worldrenowned Soviet cellist in recital
Sunday Afternoon, January 19, 1975, at 2:30 Hill Auditorium
UNIVERSITY MUSICAL SOCIETY
Burton Memorial Tower, Ann Arbor, Michigan Phone 6653717