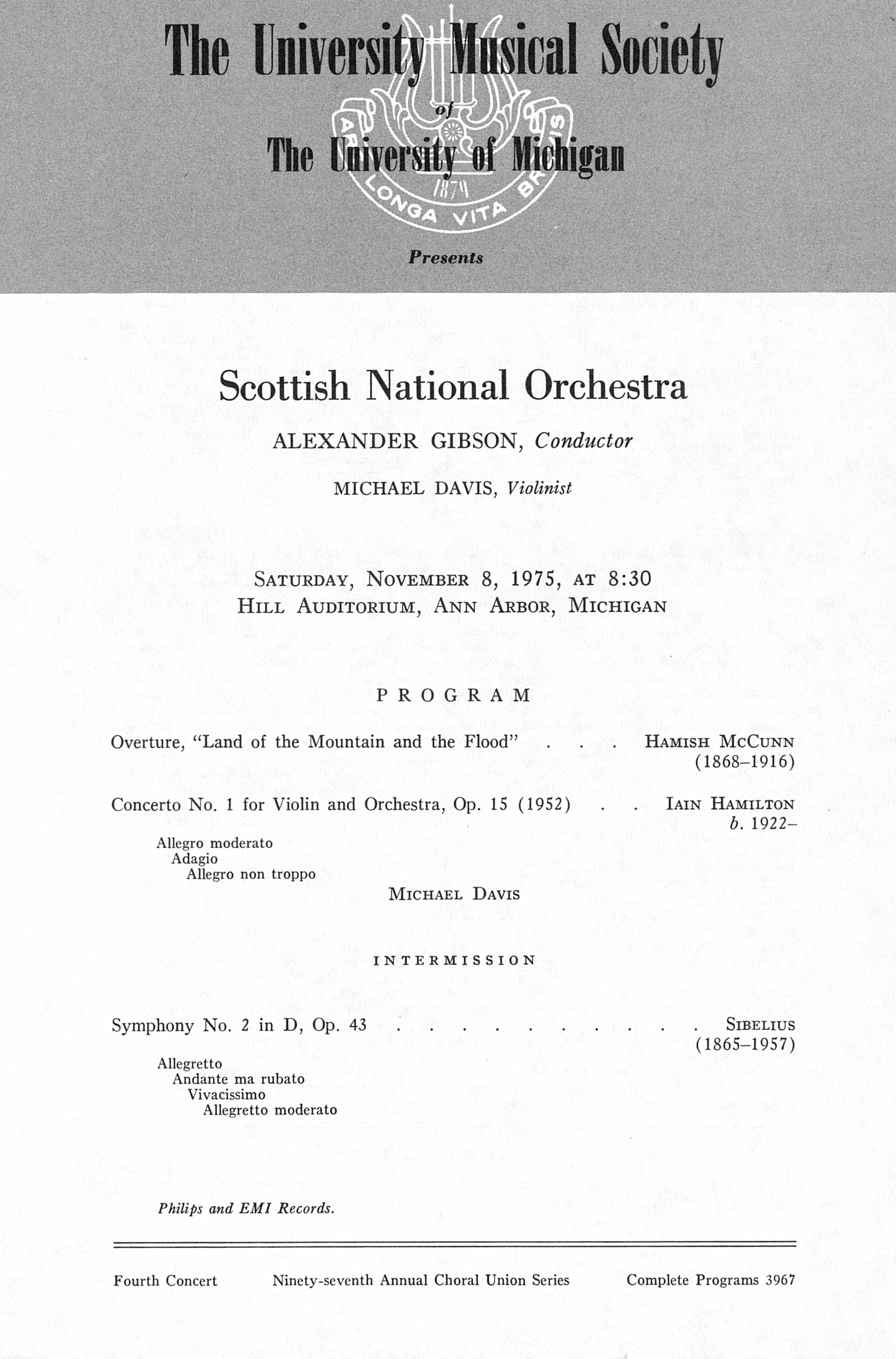 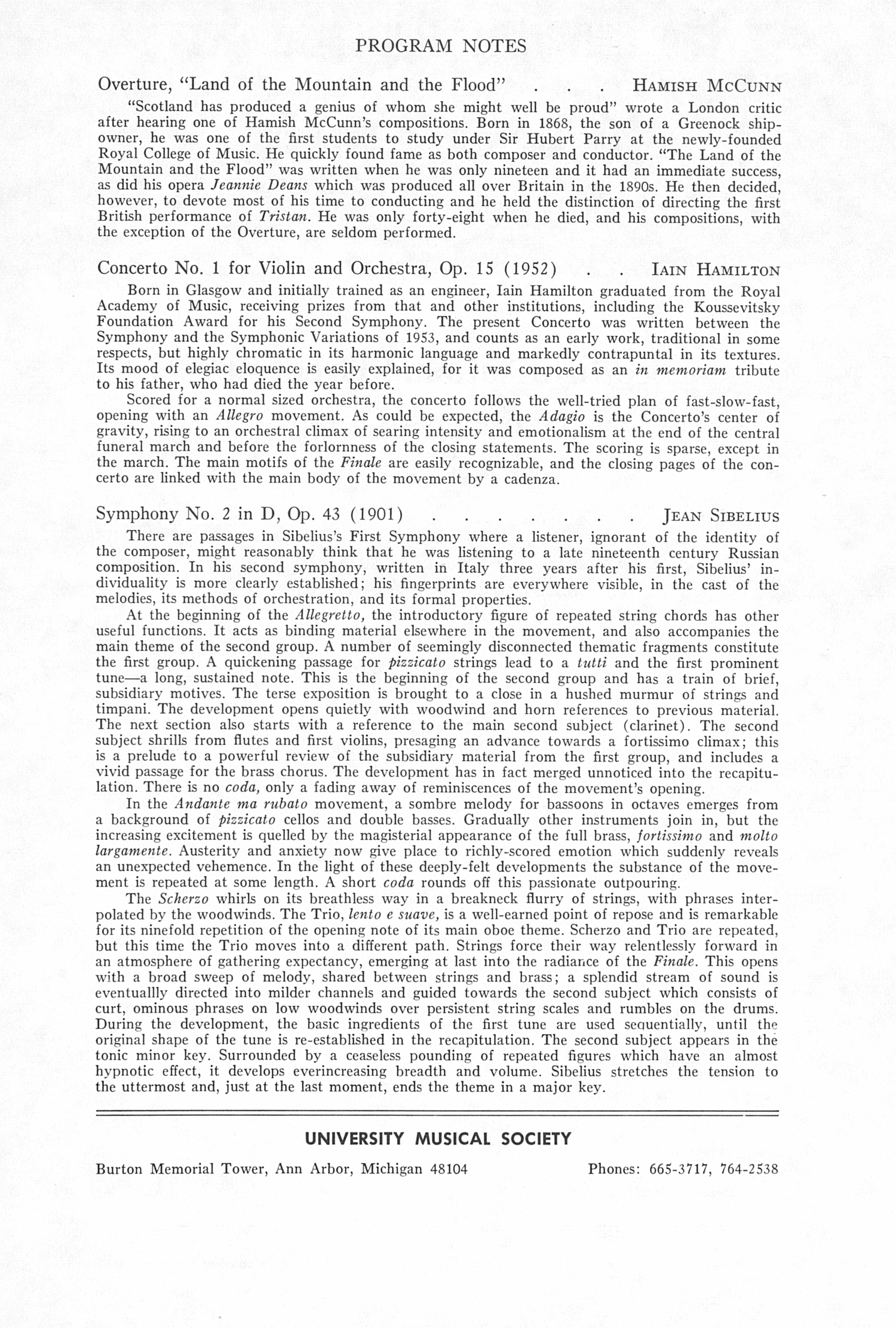 The HiivcTsilj Musical Society
TV tom? .1 r
Presents
Scottish National Orchestra
ALEXANDER GIBSON, Conductor MICHAEL DAVIS, Violinist
Saturday, November 8, 1975, at 8:30 Hill Auditorium, Ann Arbor, Michigan
PROGRAM Overture, "Land of the Mountain and the Flood"
Concerto No. 1 for Violin and Orchestra, Op. IS (1952)
Allegro moderato Adagio
Allegro non troppo
Michael Davis
INTERMISSION
Hamish McCunn (18681916)
Iain Hamilton b. 1922
Symphony No. 2 in D, Op. 43.....
Allegretto
Andante ma rubato Vivacissimo
Allegretto moderato
Sibelius (18651957)
Philips and EMI Records.
Fourth Concert Ninetyseventh Annual Choral Union Series
Complete Programs 3967
PROGRAM NOTES
Overture, "Land of the Mountain and the Flood" . . . Hamish McCunn
"Scotland has produced a genius of whom she might well be proud" wrote a London critic after hearing one of Hamish McCunn's compositions. Born in 1868, the son of a Greenock ship?owner, he was one of the first students to study under Sir Hubert Parry at the newlyfounded Royal College of Music. He quickly found fame as both composer and conductor. "The Land of the Mountain and the Flood" was written when he was only nineteen and it had an immediate success, as did his opera Jeannie Deans which was produced all over Britain in the 1890s. He then decided, however, to devote most of his time to conducting and he held the distinction of directing the first British performance of Tristan. He was only fortyeight when he died, and his compositions, with the exception of the Overture, are seldom performed.
Concerto No. 1 for Violin and Orchestra, Op. IS (1952) . . Iain Hamilton
Born in Glasgow and initially trained as an engineer, Iain Hamilton graduated from the Royal Academy of Music, receiving prizes from that and other institutions, including the Koussevitsky Foundation Award for his Second Symphony. The present Concerto was written between the Symphony and the Symphonic Variations of 1953, and counts as an early work, traditional in some respects, but highly chromatic in its harmonic language and markedly contrapuntal in its textures. Its mood of elegiac eloquence is easily explained, for it was composed as an in memoriam tribute to his father, who had died the year before.
Scored for a normal sized orchestra, the concerto follows the welltried plan of fastslowfast, opening with an Allegro movement. As could be expected, the Adagio is the Concerto's center of gravity, rising to an orchestral climax of searing intensity and emotionalism at the end of the central funeral march and before the forlornness of the closing statements. The scoring is sparse, except in the march. The main motifs of the Finale are easily recognizable, and the closing pages of the con?certo are linked with the main body of the movement by a cadenza.
Symphony No. 2 in D, Op. 43 (1901).......Jean Sibelius
There are passages in Sibelius's First Symphony where a listener, ignorant of the identity of the composer, might reasonably think that he was listening to a late nineteenth century Russian composition. In his second symphony, written in Italy three years after his first, Sibelius' in?dividuality is more clearly established; his fingerprints are everywhere visible, in the cast of the melodies, its methods of orchestration, and its formal properties.
At the beginning of the Allegretto, the introductory figure of repeated string chords has other useful functions. It acts as binding material elsewhere in the movement, and also accompanies the main theme of the second group. A number of seemingly disconnected thematic fragments constitute the first group. A quickening passage for pizzicato strings lead to a tutti and the first prominent tune--a long, sustained note. This is the beginning of the second group and has a train of brief, subsidiary motives. The terse exposition is brought to a close in a hushed murmur of strings and timpani. The development opens quietly with woodwind and horn references to previous material. The next section also starts with a reference to the main second subject (clarinet). The second subject shrills from flutes and first violins, presaging an advance towards a fortissimo climax; this is a prelude to a powerful review of the subsidiary material from the first group, and includes a vivid passage for the brass chorus. The development has in fact merged unnoticed into the recapitu?lation. There is no coda, only a fading away of reminiscences of the movement's opening.
In the Andante ma rubato movement, a sombre melody for bassoons in octaves emerges from a background of pizzicato cellos and double basses. Gradually other instruments join in, but the increasing excitement is quelled by the magisterial appearance of the full brass, fortissimo and molto largamente. Austerity and anxiety now give place to richlyscored emotion which suddenly reveals an unexpected vehemence. In the light of these deeplyfelt developments the substance of the move?ment is repeated at some length. A short coda rounds off this passionate outpouring.
The Scherzo whirls on its breathless way in a breakneck flurry of strings, with phrases inter?polated hy the woodwinds. The Trio, lento e suave, is a wellearned point of repose and is remarkable for its ninefold repetition of the opening note of its main oboe theme. Scherzo and Trio are repeated, but this time the Trio moves into a different path. Strings force their way relentlessly forward in an atmosphere of gathering expectancy, emerging at last into the radiance of the Finale. This opens with a broad sweep of melody, shared between strings and brass; a splendid stream of sound is eventuallly directed into milder channels and guided towards the second subject which consists of curt, ominous phrases on low woodwinds over persistent string scales and rumbles on the drums. During the development, the basic ingredients of the first tune are used seouentially, until tlv' original shape of the tune is reestablished in the recapitulation. The second subject appears in the tonic minor key. Surrounded by a ceaseless pounding of repeated figures which have an almost hypnotic effect, it develops everincrcasing breadth and volume. Sibelius stretches the tension to the uttermost and, just at the last moment, ends the theme in a major key.
UNIVERSITY MUSICAL SOCIETY
Burton Memorial Tower, Ann Arbor, Michigan 48104 Phones: 6653717, 7642538