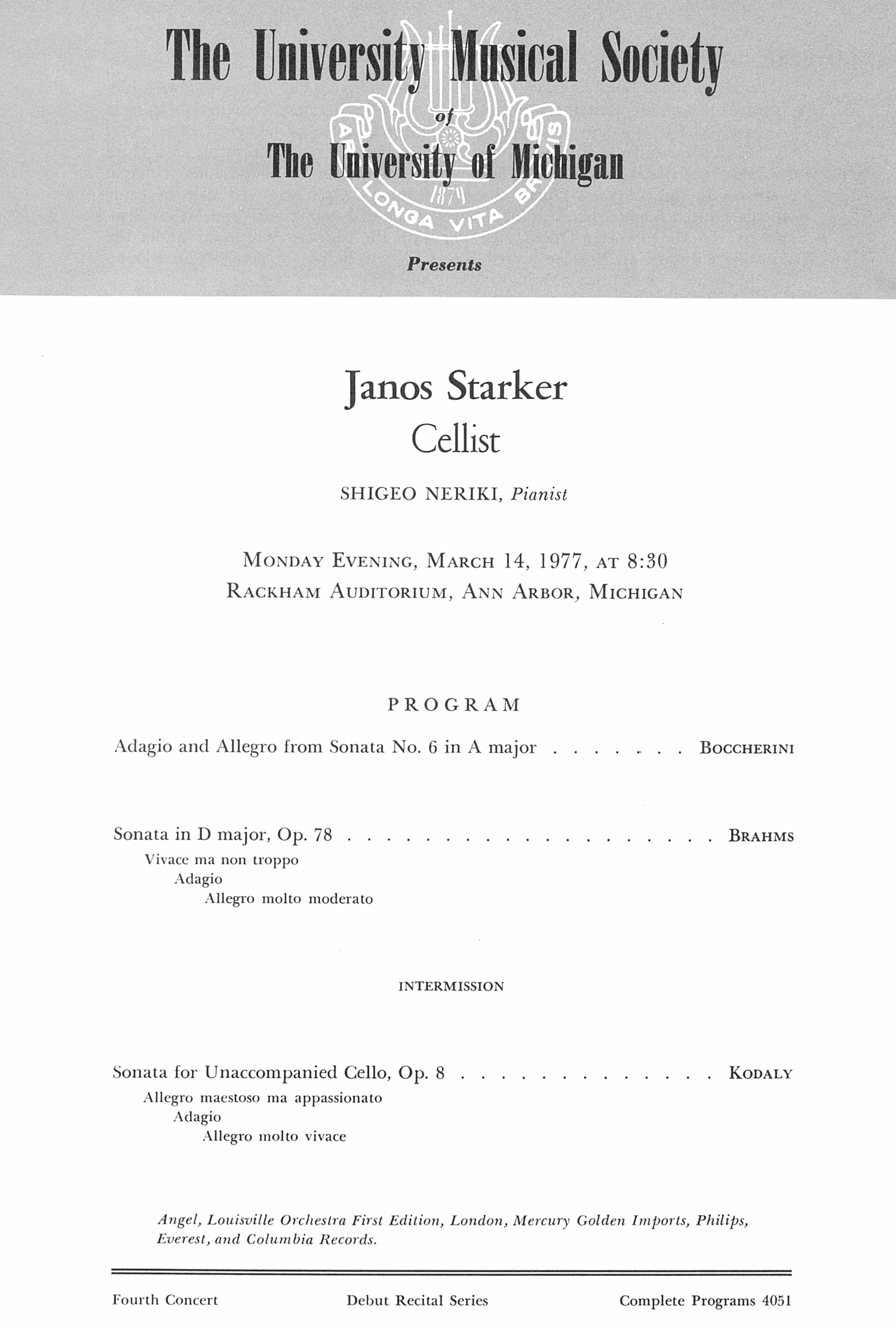 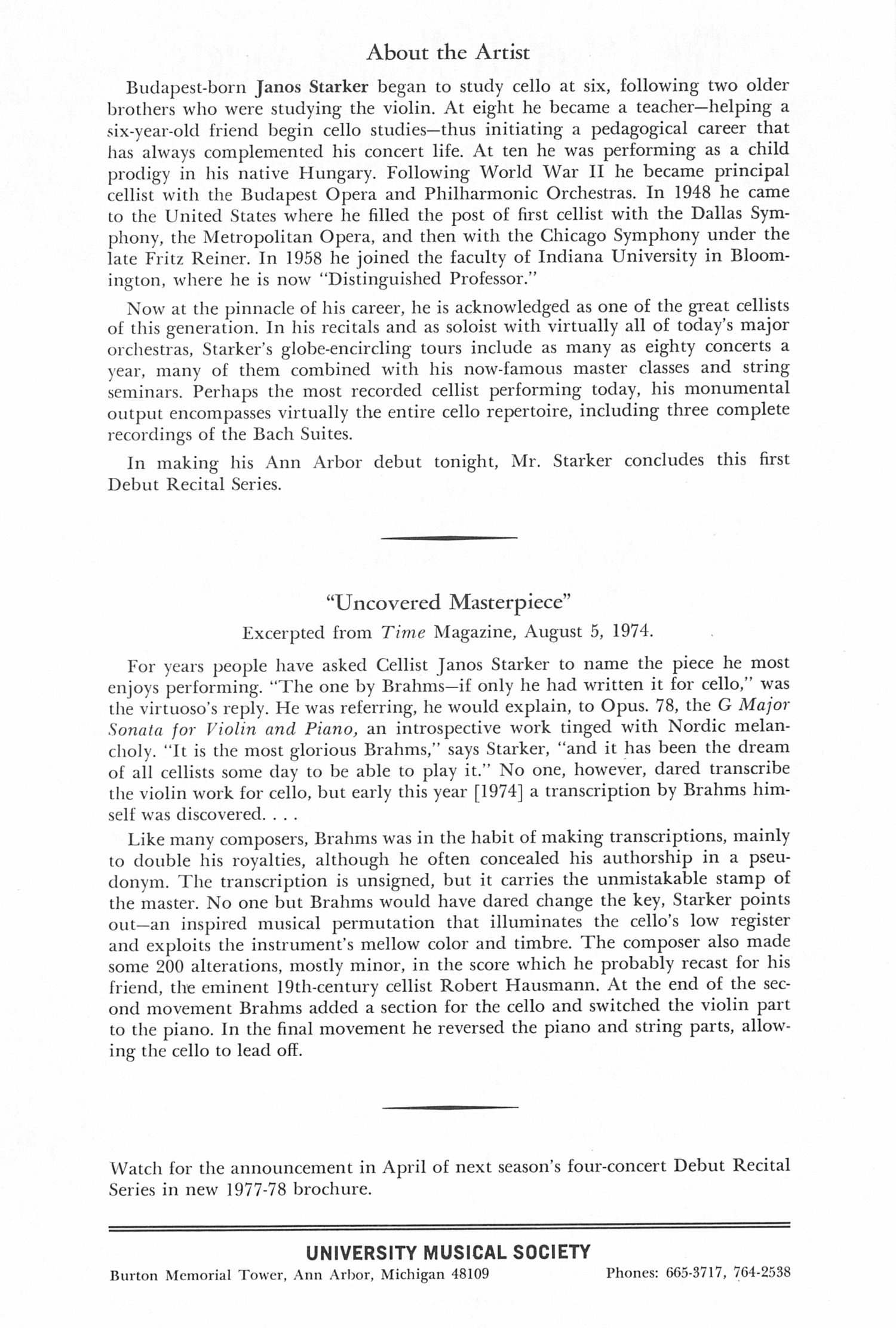 The University Musical Society
The University
Presents
Janos Starker
Cellist
SHIGEO NERIKI, Pianist
Monday Evening, March 14, 1977, at 8:30 Rackham Auditorium, Ann Arbor, Michigan
PROGRAM
Adagio and Allegro from Sonata No. 6 in A major.......Boccherini
Sonata in D major, Op. 78...................Brahms
Vivace ma non troppo
Adagio
Allegro molto modcralo
INTERMISSION
Sonata for Unaccompanied Cello, Op. 8.............Kodaly
Allegro maestoso ma appassionato
Adagio
Allegro molto vivace
Angel, Louisville Orchestra First Edition, London, Mercury Golden Imports, Philips, Everest, and Columbia Records.
Fourth Concert Debut Recital Scries Complete Programs 4051
About the Artist
Budapestborn Janos Starker began to study cello at six, following two older brothers who were studying the violin. At eight he became a teacher--helping a sixyearold friend begin cello studies--thus initiating a pedagogical career that has always complemented his concert life. At ten he was performing as a child prodigy in his native Hungary. Following World War II he became principal cellist with the Budapest Opera and Philharmonic Orchestras. In 1948 he came to the United States where he filled the post of first cellist with the Dallas Sym?phony, the Metropolitan Opera, and then with the Chicago Symphony under the late Fritz Reiner. In 1958 he joined the faculty of Indiana University in Bloomington, where he is now "Distinguished Professor."
Now at the pinnacle of his career, he is acknowledged as one of the great cellists of this generation. In his recitals and as soloist with virtually all of today's major orchestras, Stalker's globeencircling tours include as many as eighty concerts a year, many of them combined with his nowfamous master classes and string seminars. Perhaps the most recorded cellist performing today, his monumental output encompasses virtually the entire cello repertoire, including three complete recordings of the Bach Suites.
In making his Ann Arbor debut tonight, Mr. Starker concludes this first Debut Recital Series.
"Uncovered Masterpiece" Excerpted from Time Magazine, August 5, 1974.
For years people have asked Cellist Janos Starker to name the piece he most enjoys performing. "The one by Brahms--if only he had written it for cello," was the virtuoso's reply. He was referring, he would explain, to Opus. 78, the G Major Sonata for Violin and Piano, an introspective work tinged with Nordic melan?choly. "It is the most glorious Brahms," says Starker, "and it has been the dream of all cellists some day to be able to play it." No one, however, dared transcribe the violin work for cello, but early this year [1974] a transcription by Brahms him?self was discovered. . . .
Like many composers, Brahms was in the habit of making transcriptions, mainly to double his royalties, although he often concealed his authorship in a pseu?donym. The transcription is unsigned, but it carries the unmistakable stamp of the master. No one but Brahms would have dared change the key, Starker points out--an inspired musical permutation that illuminates the cello's low register and exploits the instrument's mellow color and timbre. The composer also made some 200 alterations, mostly minor, in the score which he probably recast for his friend, the eminent 19thcentury cellist Robert Hausmann. At the end of the sec?ond movement Brahms added a section for the cello and switched the violin part to the piano. In the final movement he reversed the piano and string parts, allow?ing the cello to lead off.
Watch for the announcement in April of next season's fourconcert Debut Recital Series in new 197778 brochure.
UNIVERSITY MUSICAL SOCIETY
Burton Memorial Tower, Ann Arbor, Michigan 48109 Phones: 6653717, 7642538