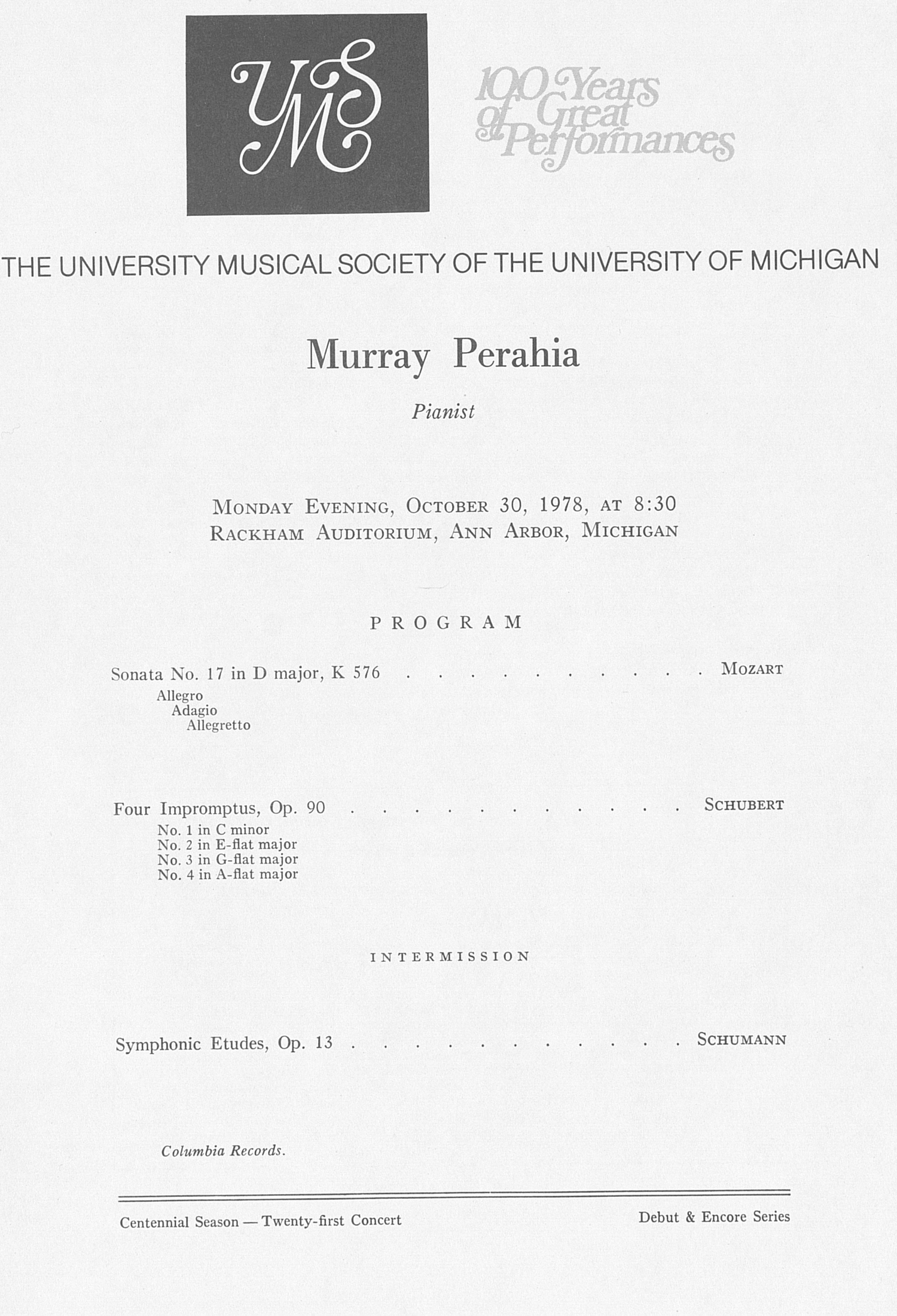 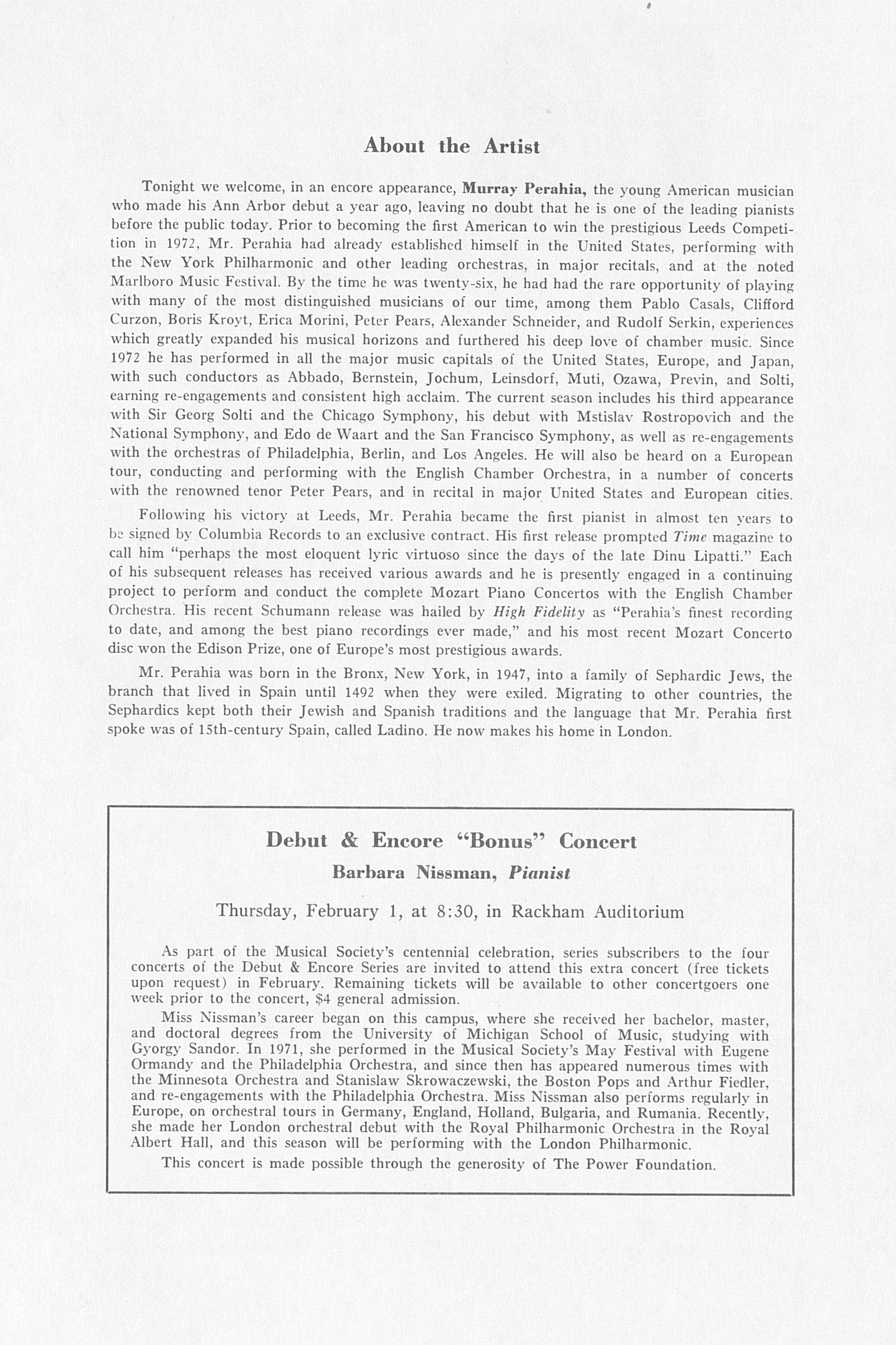 THE UNIVERSITY MUSICAL SOCIETY OF THE UNIVERSITY OF MICHIGAN
Murray Perahia
Pianist
Monday Evening, October 30, 1978, at 8:30 Rackham Auditorium, Ann Arbor, Michigan
PROGRAM
Sonata No. 17 in D major, K 576..........Mozart
Allegro Adagio
Allegretto
Four Impromptus, Op. 90...........Schubert
No. 1 in C minor No. 2 in E-flat major No. 3 in G-flat major No. 4 in A-flat major
INTERMISSION
Symphonic Etudes, Op. 13...........Schumann
Columbia Records.
Centennial Season -Twenty-first Concert Debut & Encore Series
About the Artist
Tonight we welcome, in an encore appearance, Murray Perahia, the young American musician who made his Ann Arbor debut a year ago, leaving no doubt that he is one of the leading pianists before the public today. Prior to becoming the first American to win the prestigious Leeds Competi?tion in 1972. Mr. Perahia had already established himself in the United States, performing with the New York Philharmonic and other leading orchestras, in major recitals, and at the noted Marlboro Music Festival. By the time he was twenty-six, he had had the rare opportunity of playing with many of the most distinguished musicians of our time, among them Pablo Casals, Clifford lurzon, Boris Kroyt, Erica Morini, Peter Pears, Alexander Schneider, and Rudolf Serkin, experiences which greatly expanded his musical horizons and furthered his deep love of chamber music. Since 1972 he has performed in all the major music capitals of the United States, Europe, and Japan, with such conductors as Abbado, Bernstein, Jochum, Leinsdorf, Muti, Ozawa, Previn, and Solti, earning re-engagements and consistent high acclaim. The current season includes his third appearance with Sir Georg Solti and the Chicago Symphony, his debut with Mstislav Rostropovich and the National Symphony, and Edo dc Waart and the San Francisco Symphony, as well as re-engagements with the orchestras of Philadelphia, Berlin, and Los Angeles. He will also be heard on a European tour, conducting and performing with the English Chamber Orchestra, in a number of concerts with the renowned tenor Peter Pears, and in recital in major United States and European cities.
Following his victory at Leeds, Mr. Perahia became the first pianist in almost ten years to k -iu'iad by Columbia Records to an exclusive contract. His first release prompted Time magazine to call him "perhaps the most eloquent lyric virtuoso since the days of the late Dinu Lipatti." Each of his subsequent releases has received various awards and he is presently engaged in a continuing project to perform and conduct the complete Mozart Piano Concertos with the English Chamber Orchestra. His recent Schumann release was hailed by High Fidelity as "Perahia's finest recording to date, and among the best piano recordings ever made," and his most recent Mozart Concerto disc won the Edison Prize, one of Europe's most prestigious awards.
Mr. Perahia was born in the Bronx, New York, in 1947, into a family of Sephardic Jews, the branch that lived in Spain until 1492 when they were exiled. Migrating to other countries, the Sephardics kept both their Jewish and Spanish traditions and the language that Mr. Perahia first spoke was of 15th-century Spain, called Ladino. He now makes his home in London.
Debut & Encore "Bonus" Concert Barbara Nissman, Pianist
Thursday, February 1, at 8:30, in Rackham Auditorium
As part of the Musical Society's centennial celebration, series subscribers to the four concerts of the Debut & Encore Series are invited to attend this extra concert (free tickets upon request) in February. Remaining tickets will be available to other concertgoers one week prior to the concert, $4 general admission.
Miss Xissman's career began on this campus, where she received her bachelor, master, and doctoral degrees from the University of Michigan School of Music, studying with Gyorgy Sandor. In 1971, she performed in the Musical Society's May Festival with Eugene Ormandy and the Philadelphia Orchestra, and since then has appeared numerous times with the Minnesota Orchestra and Stanislaw Skrowaczewski, the Boston Pops and Arthur Fiedler, and re-engagements with the Philadelphia Orchestra. Miss Nissman also performs regularly in Europe, on orchestral tours in Germany, England, Holland, Bulgaria, and Rumania. Recently, she made her London orchestral debut with the Royal Philharmonic Orchestra in the Royal Albert Hall, and this season will be performing with the London Philharmonic.
This concert is made possible through the generosity of The Power Foundation.