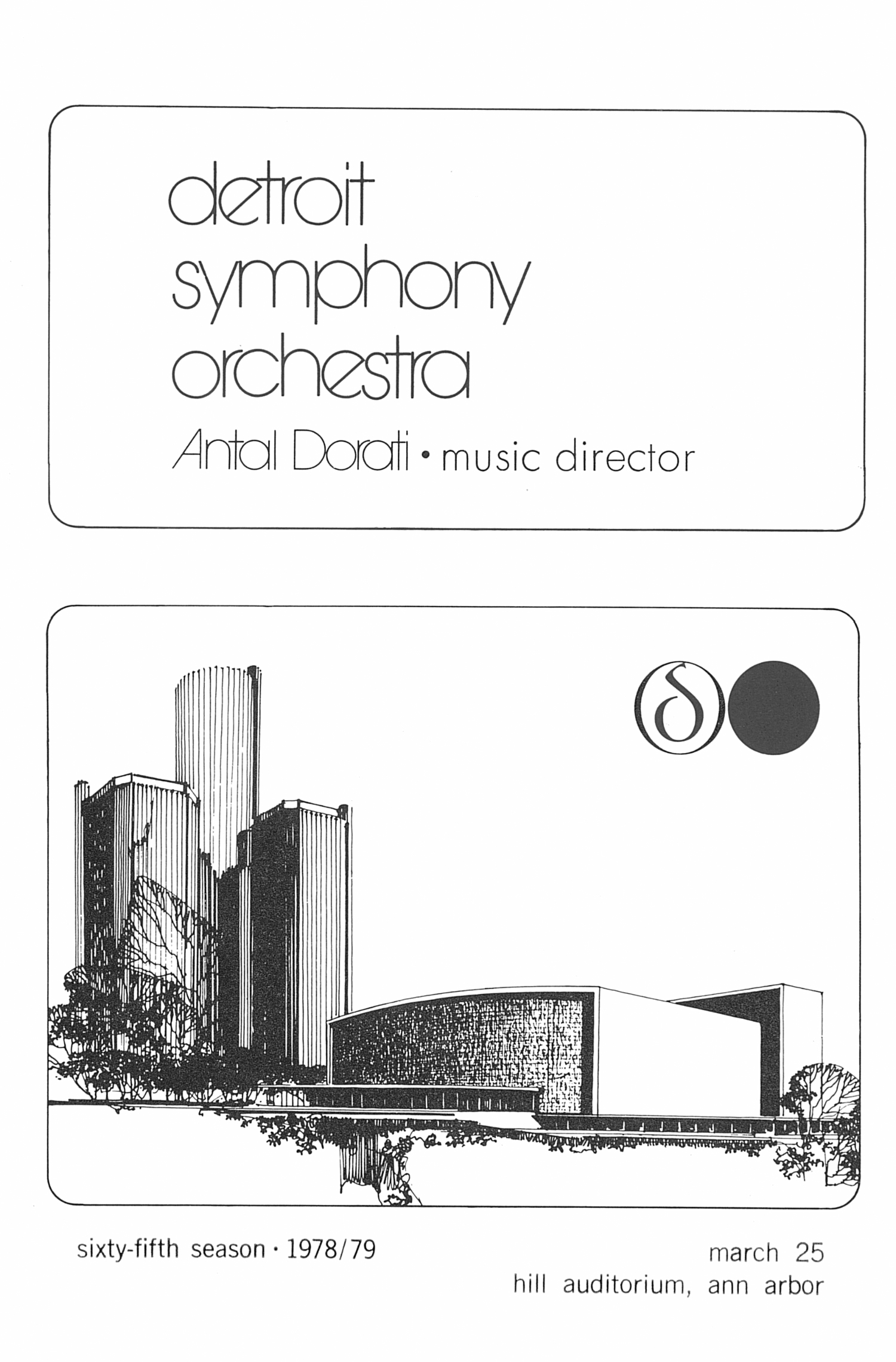 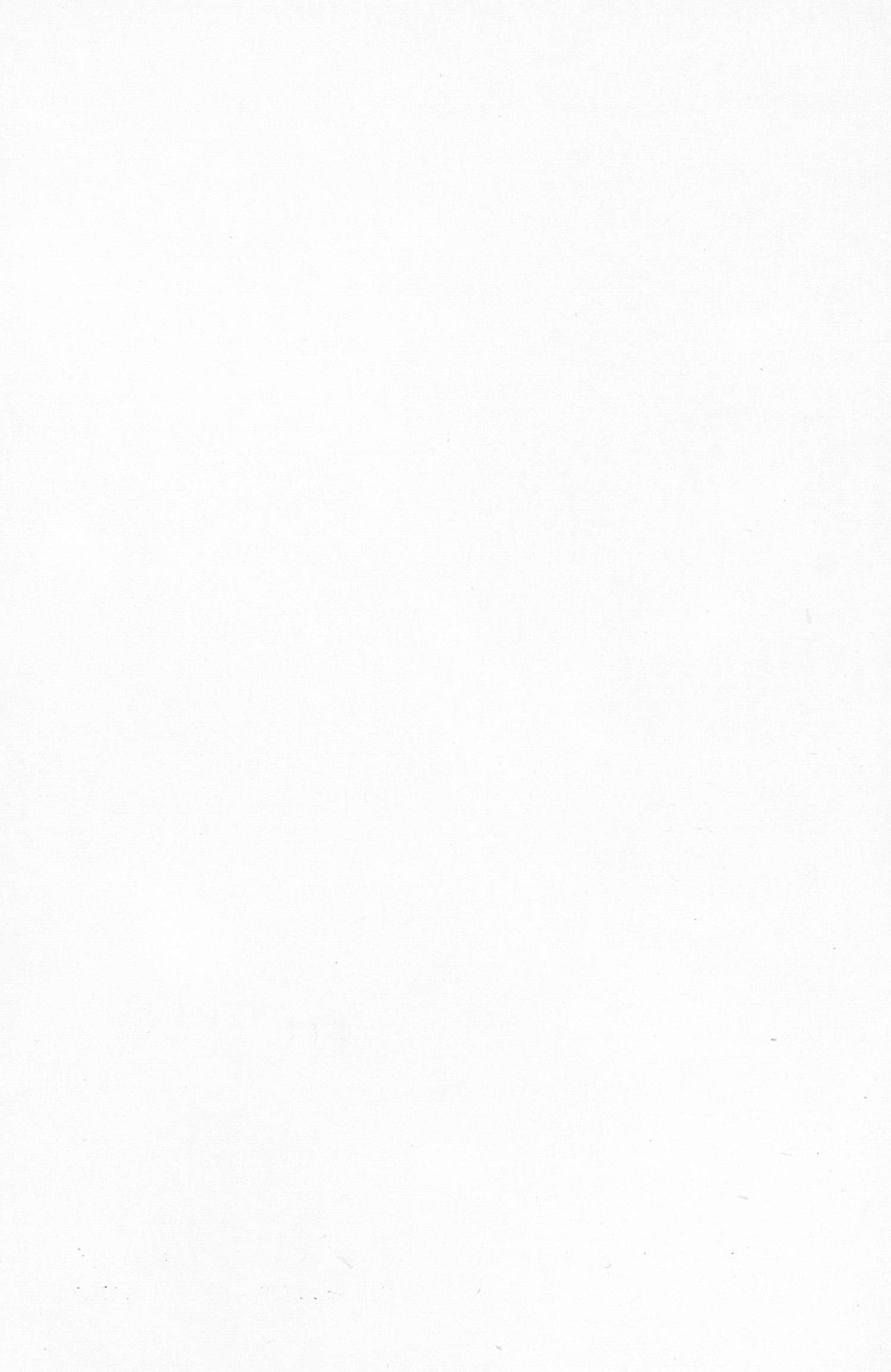 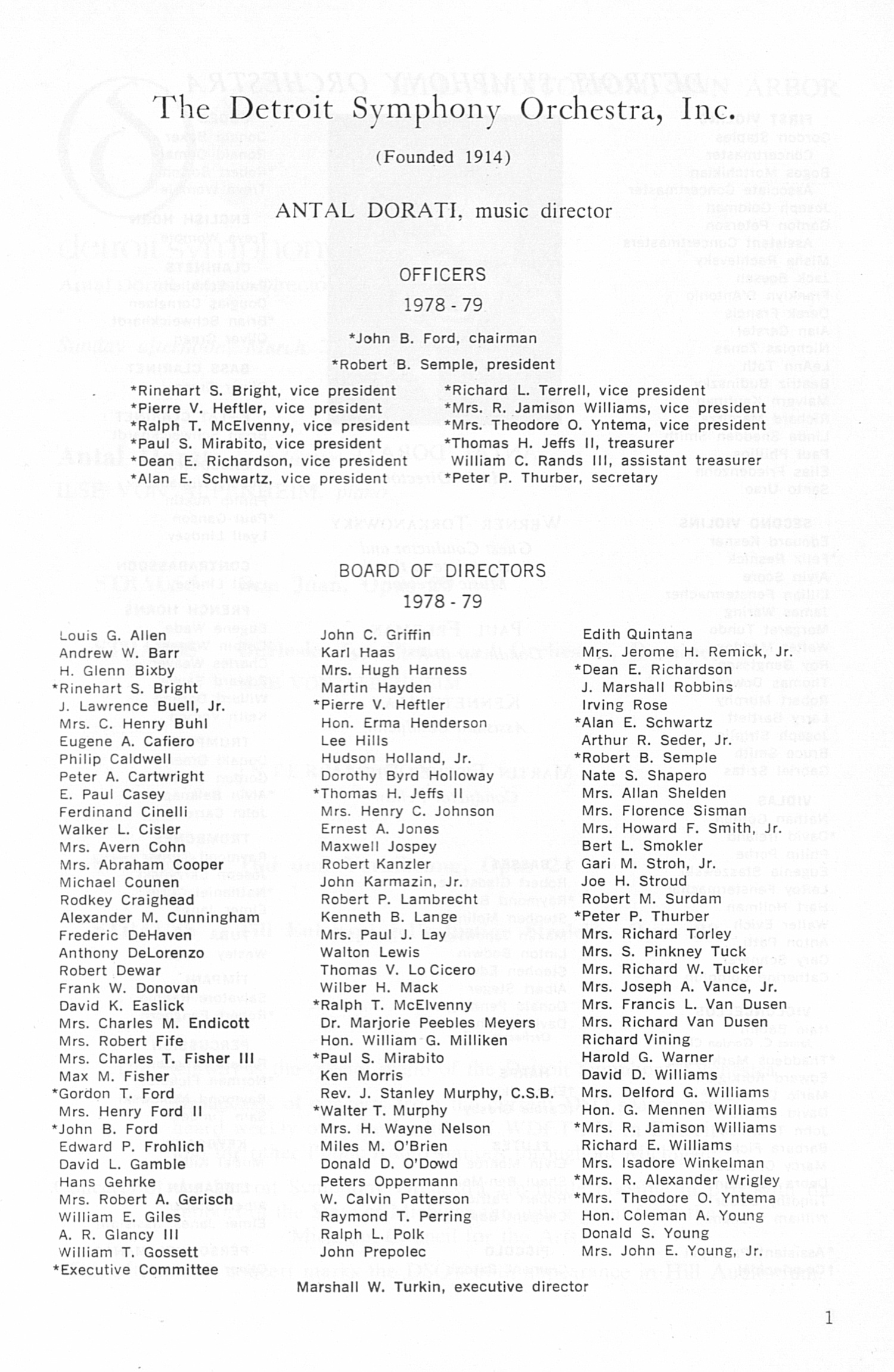 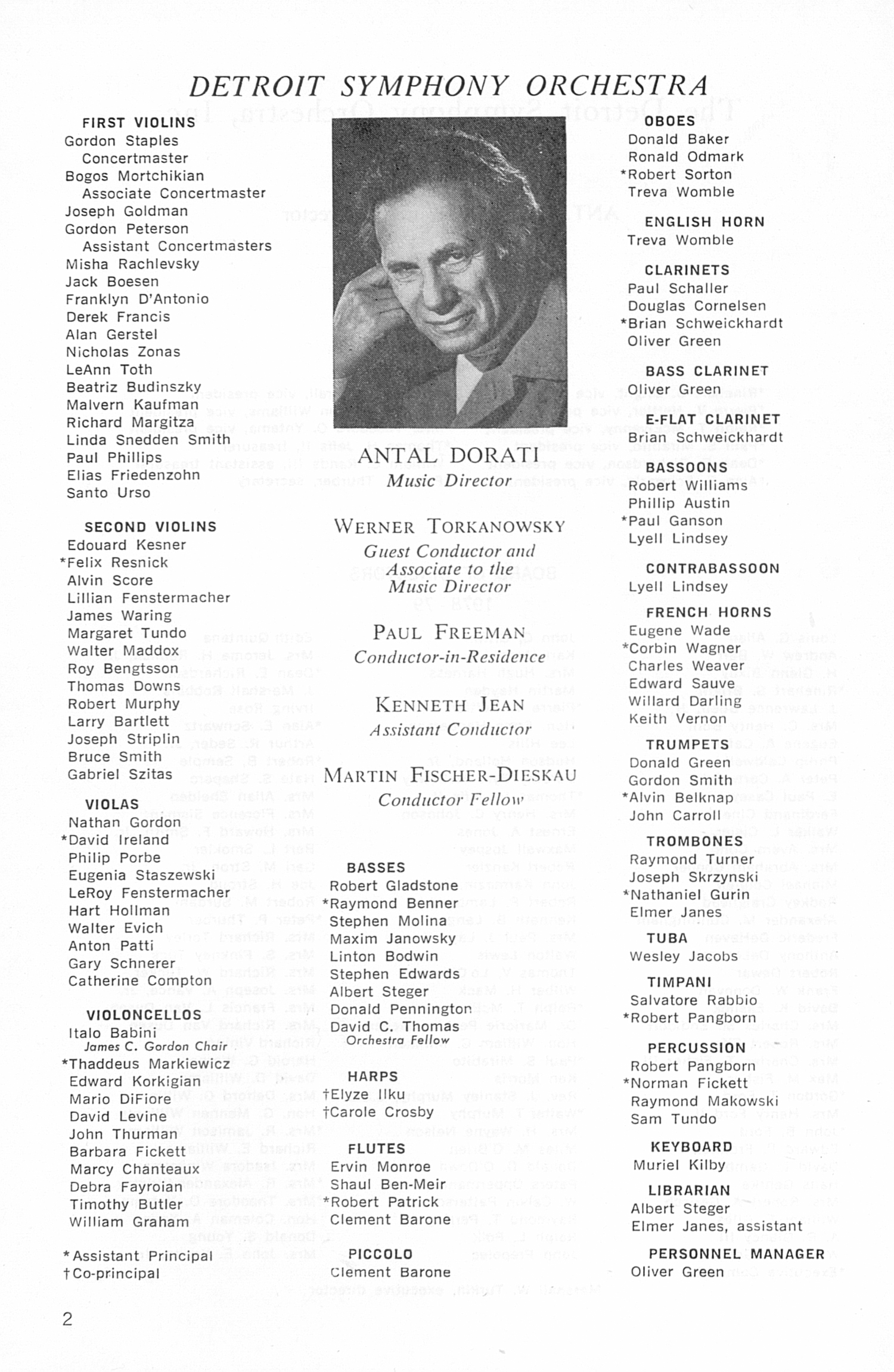 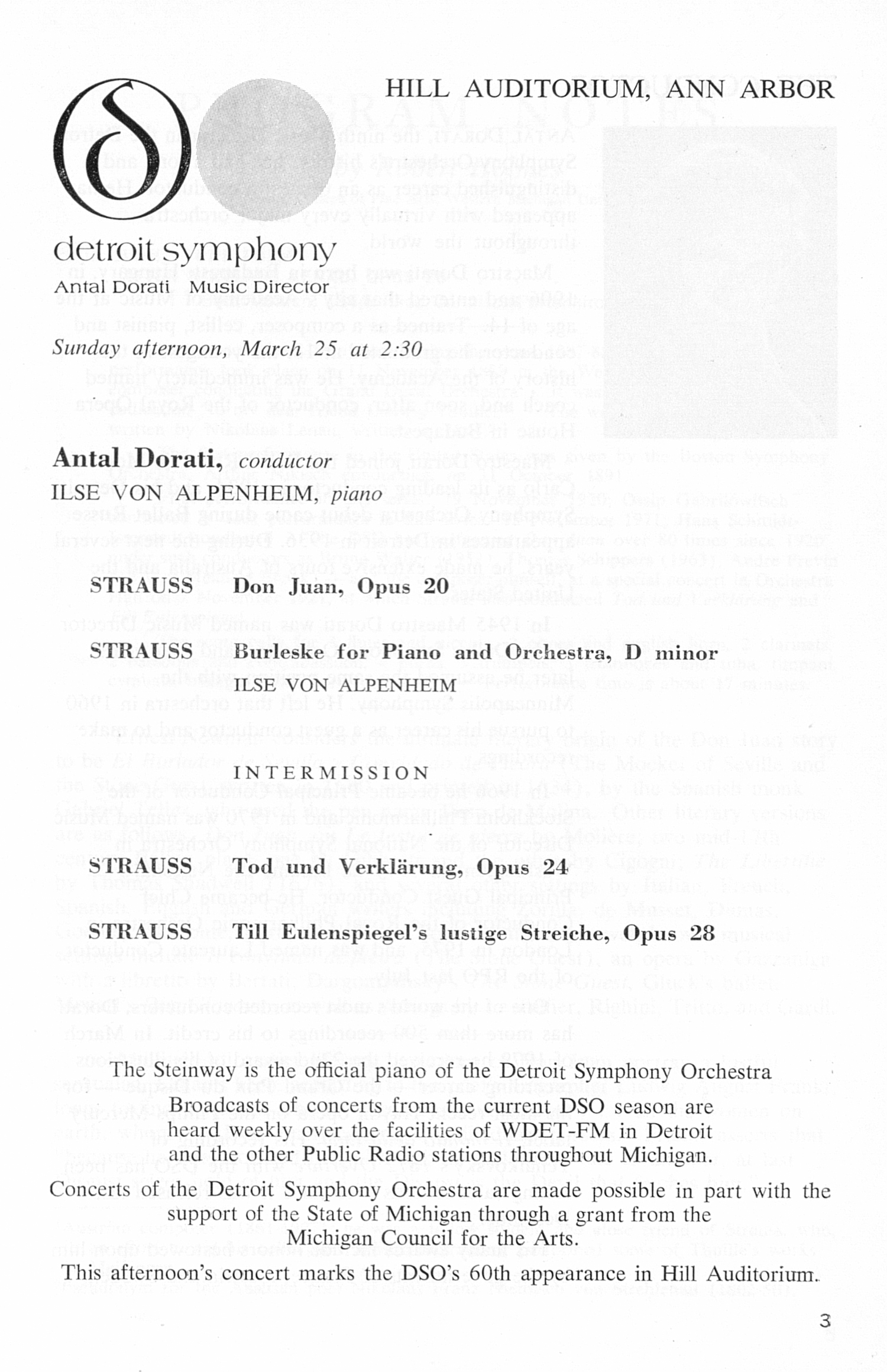 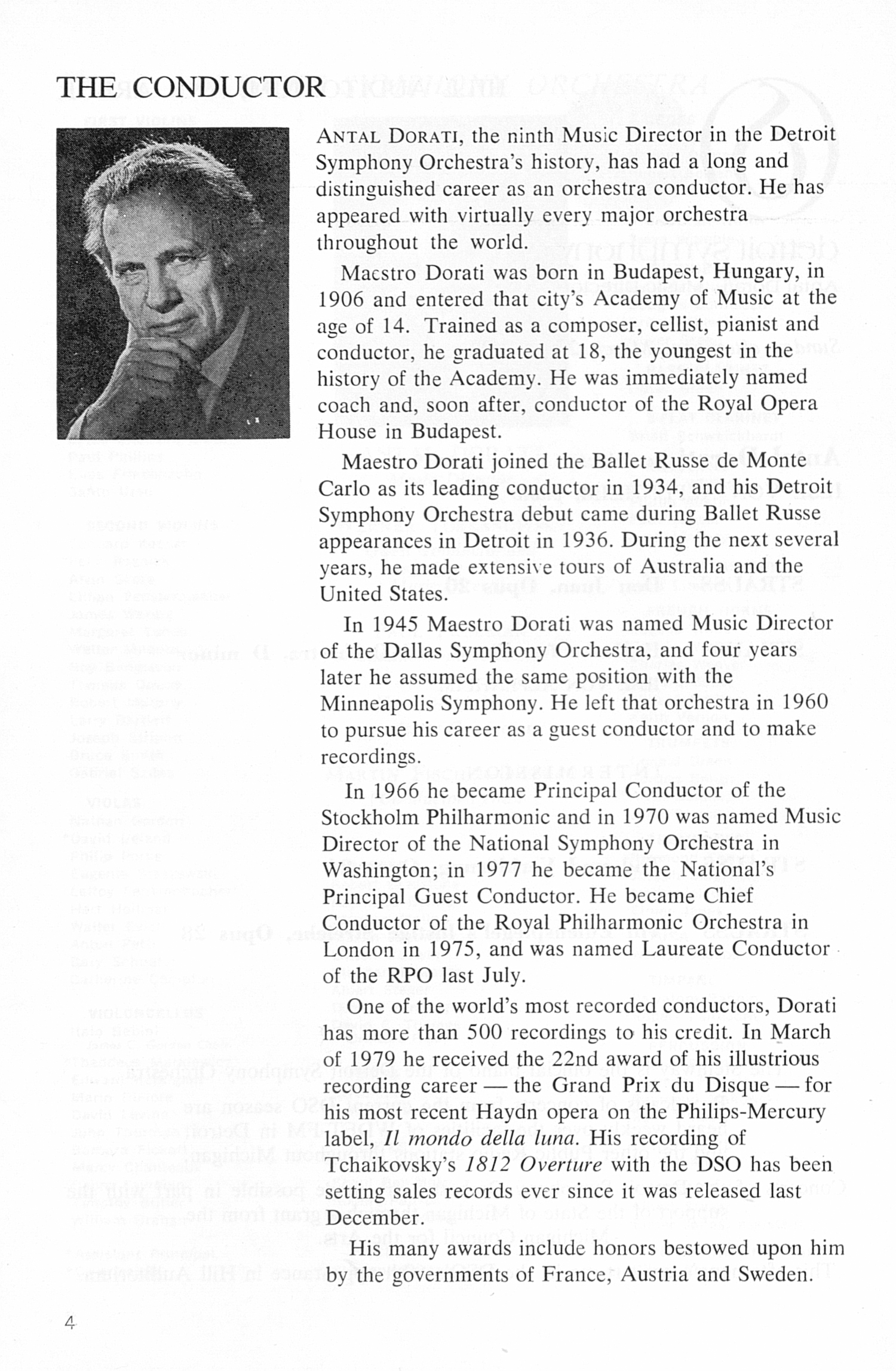 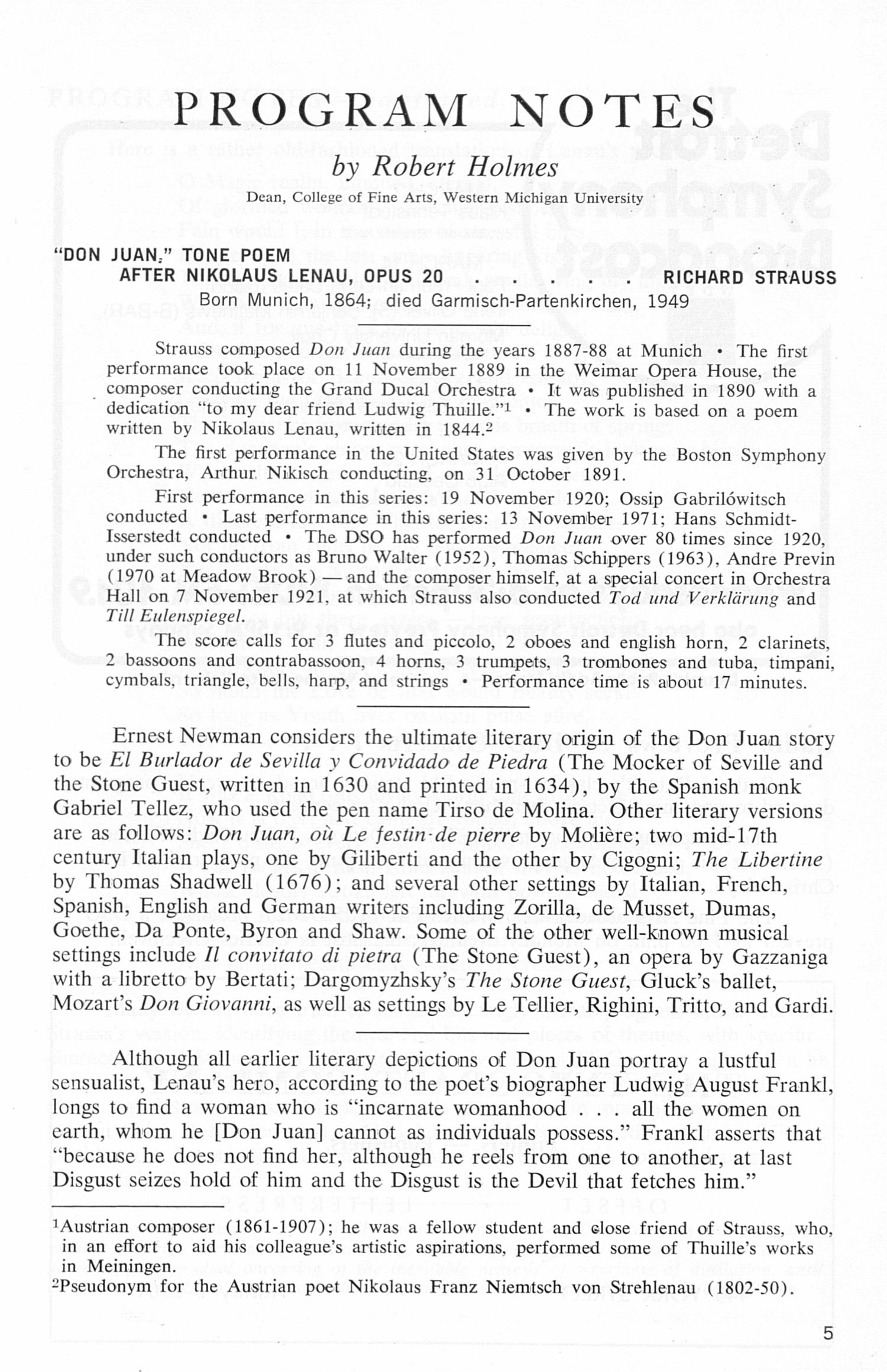 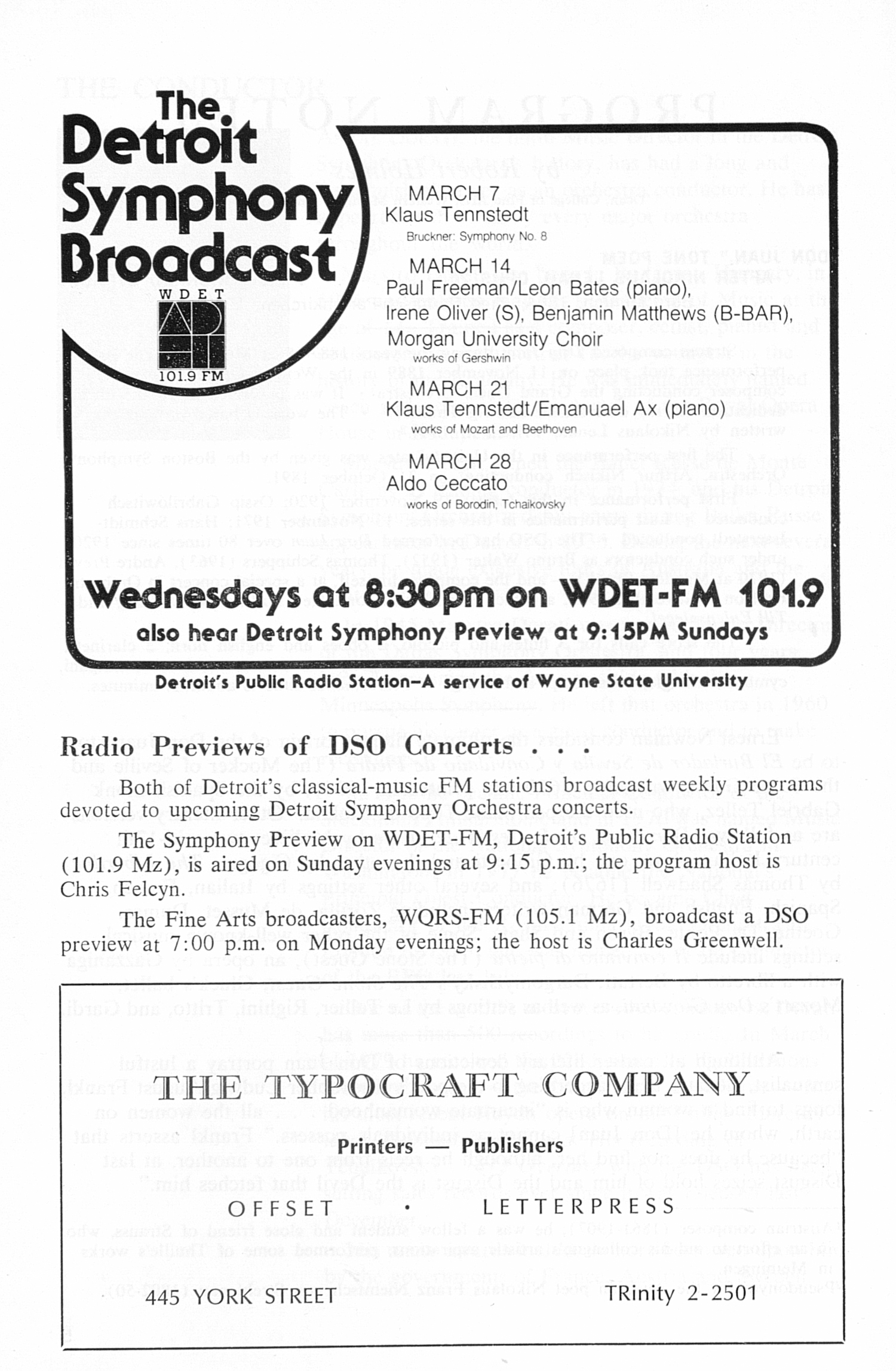 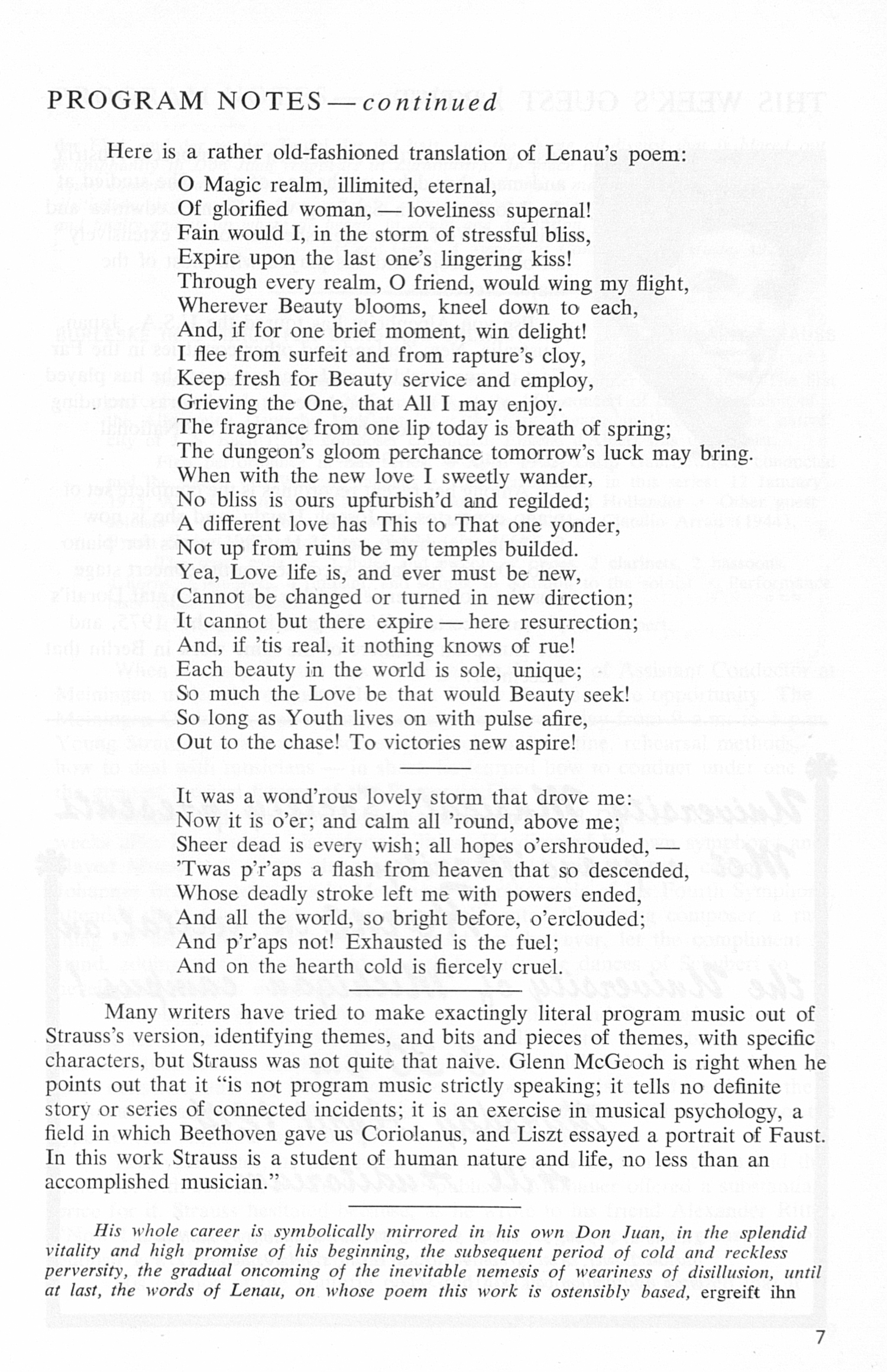 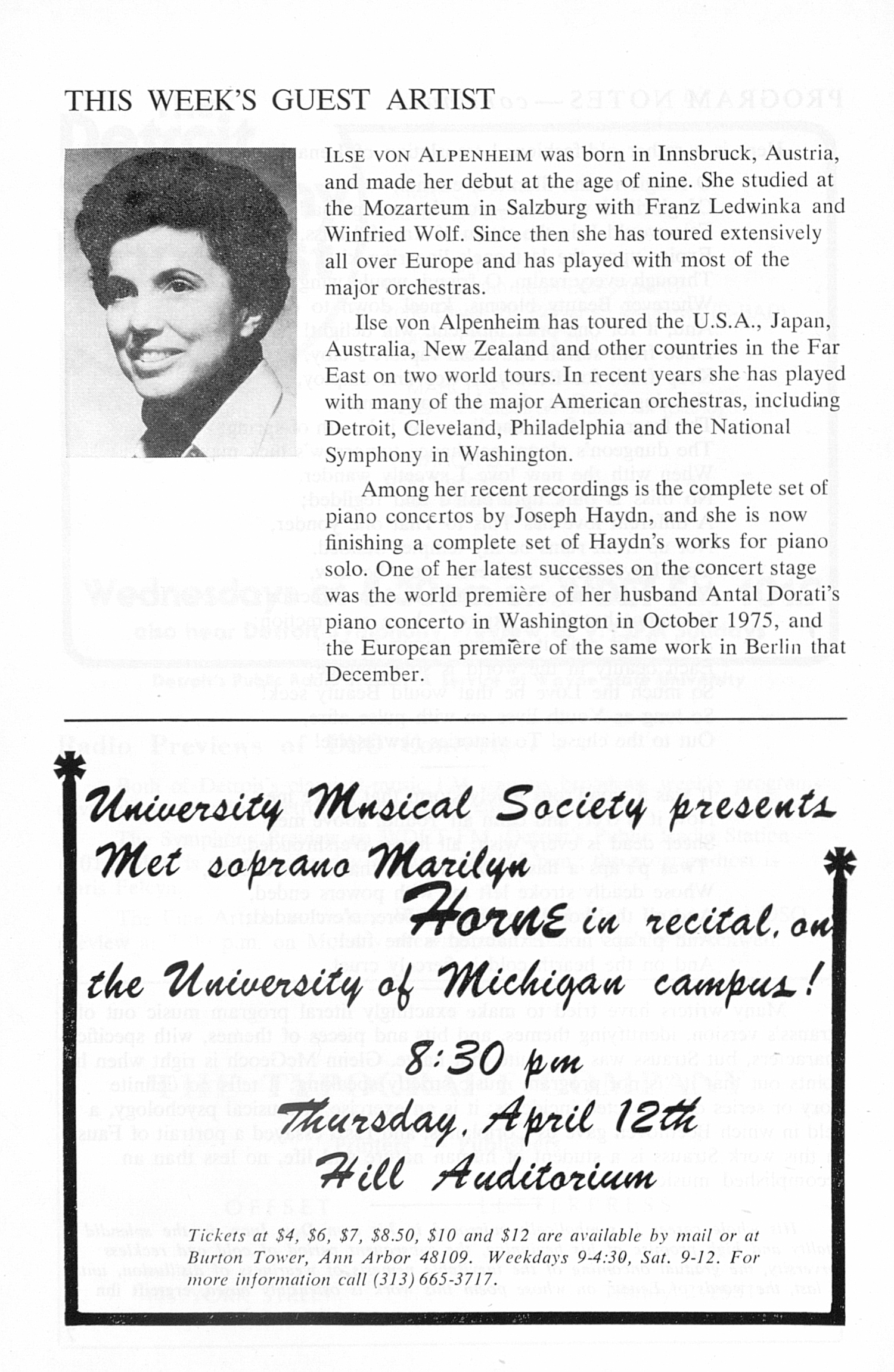 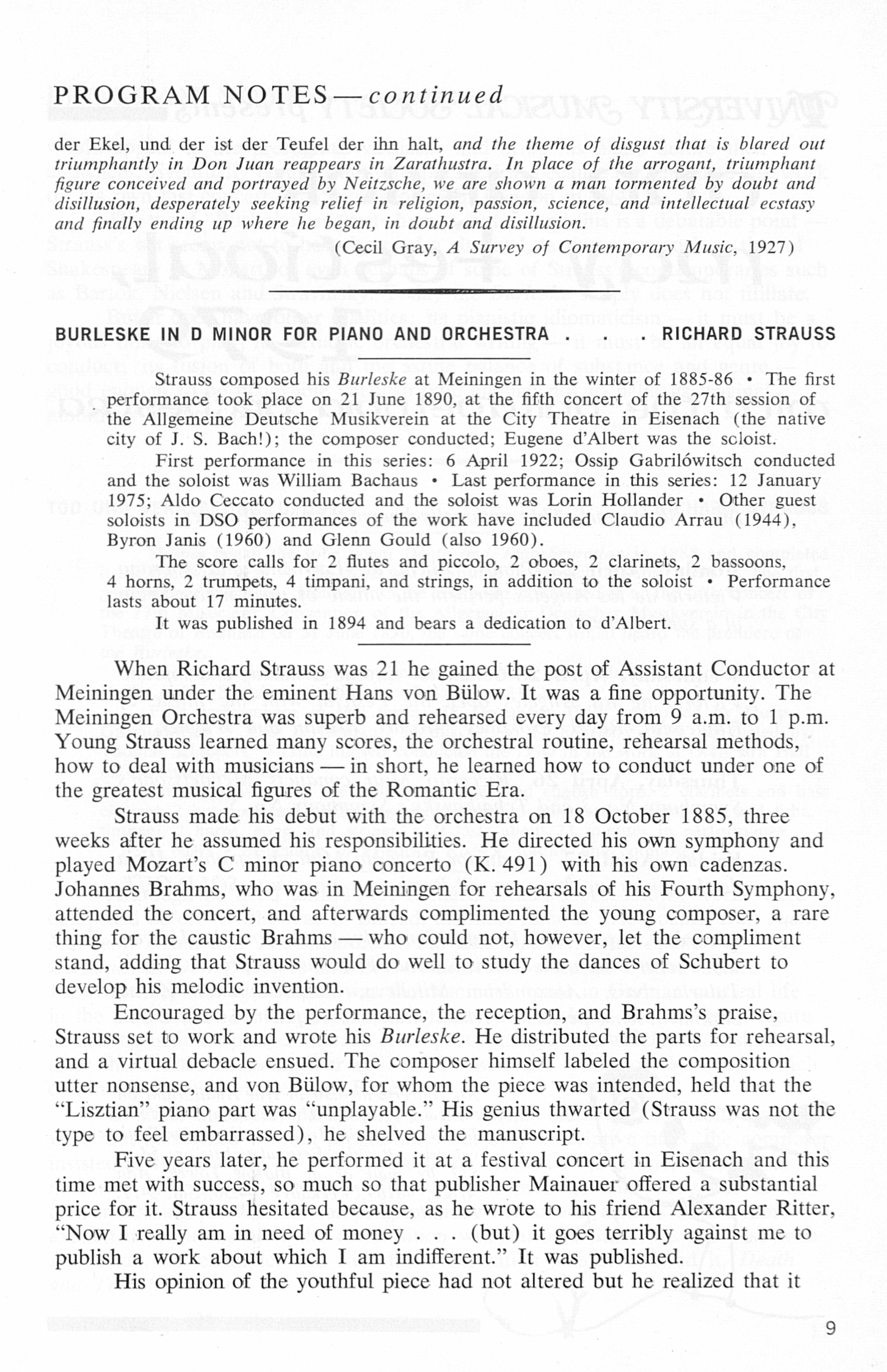 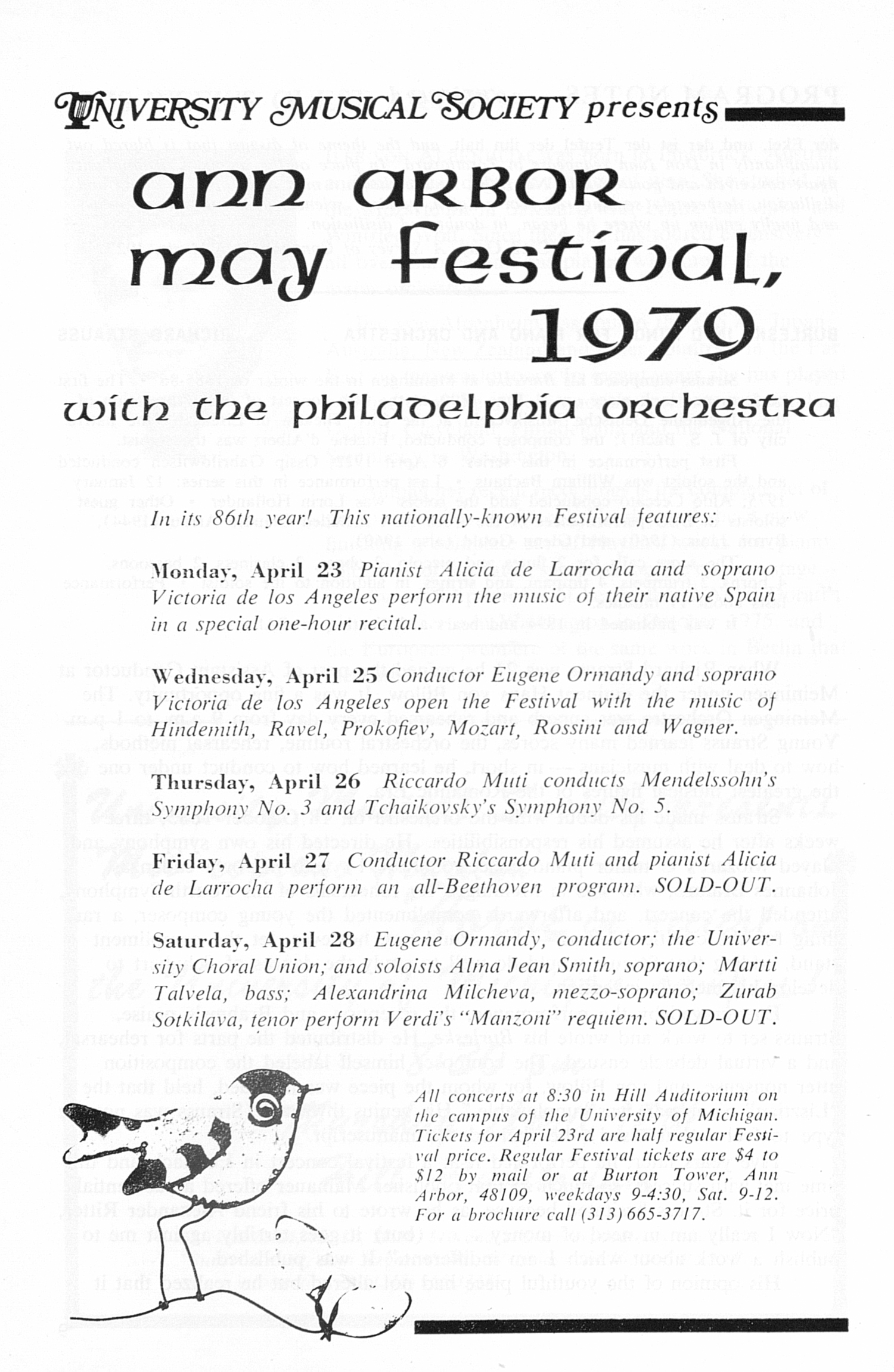 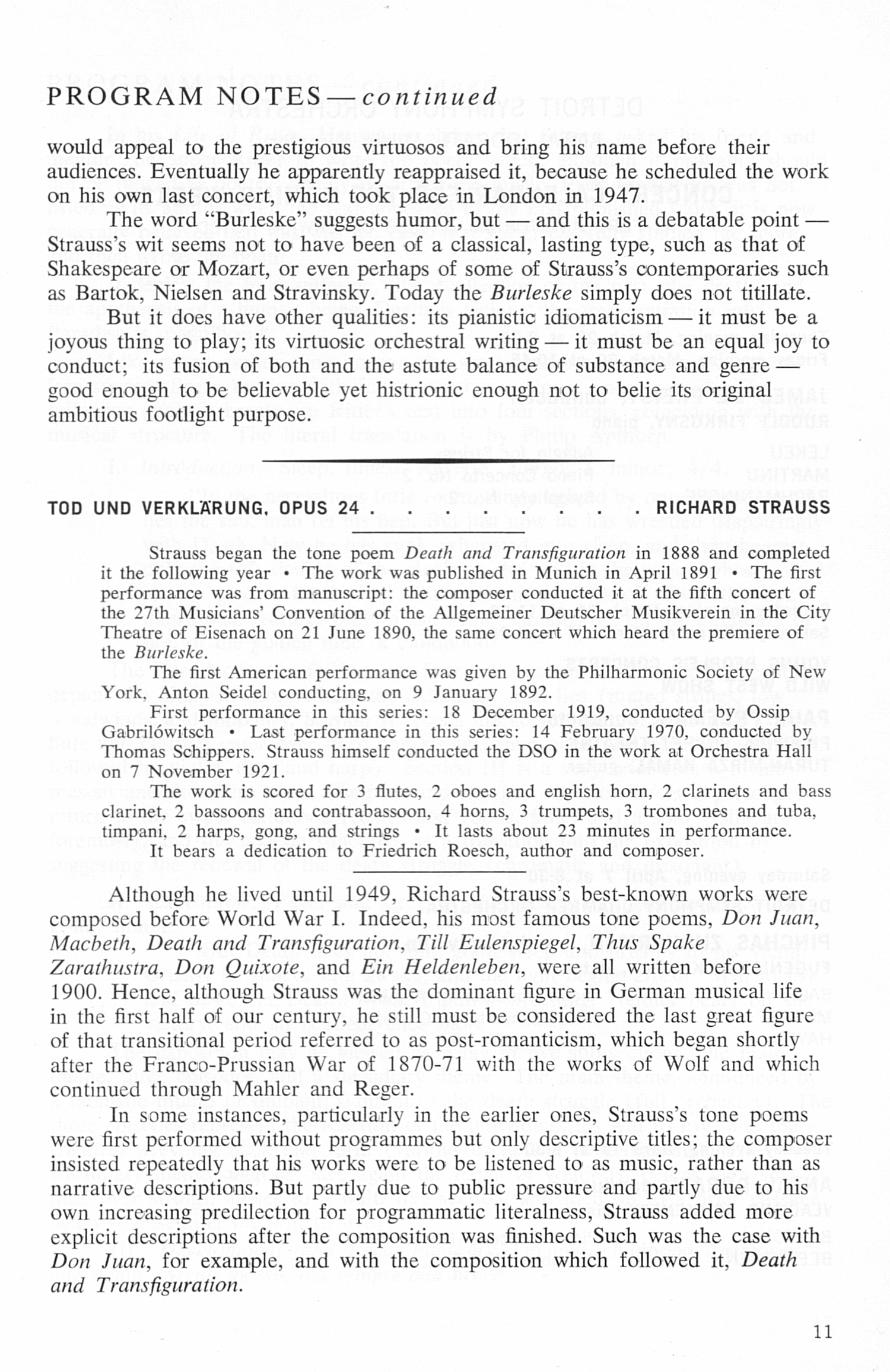 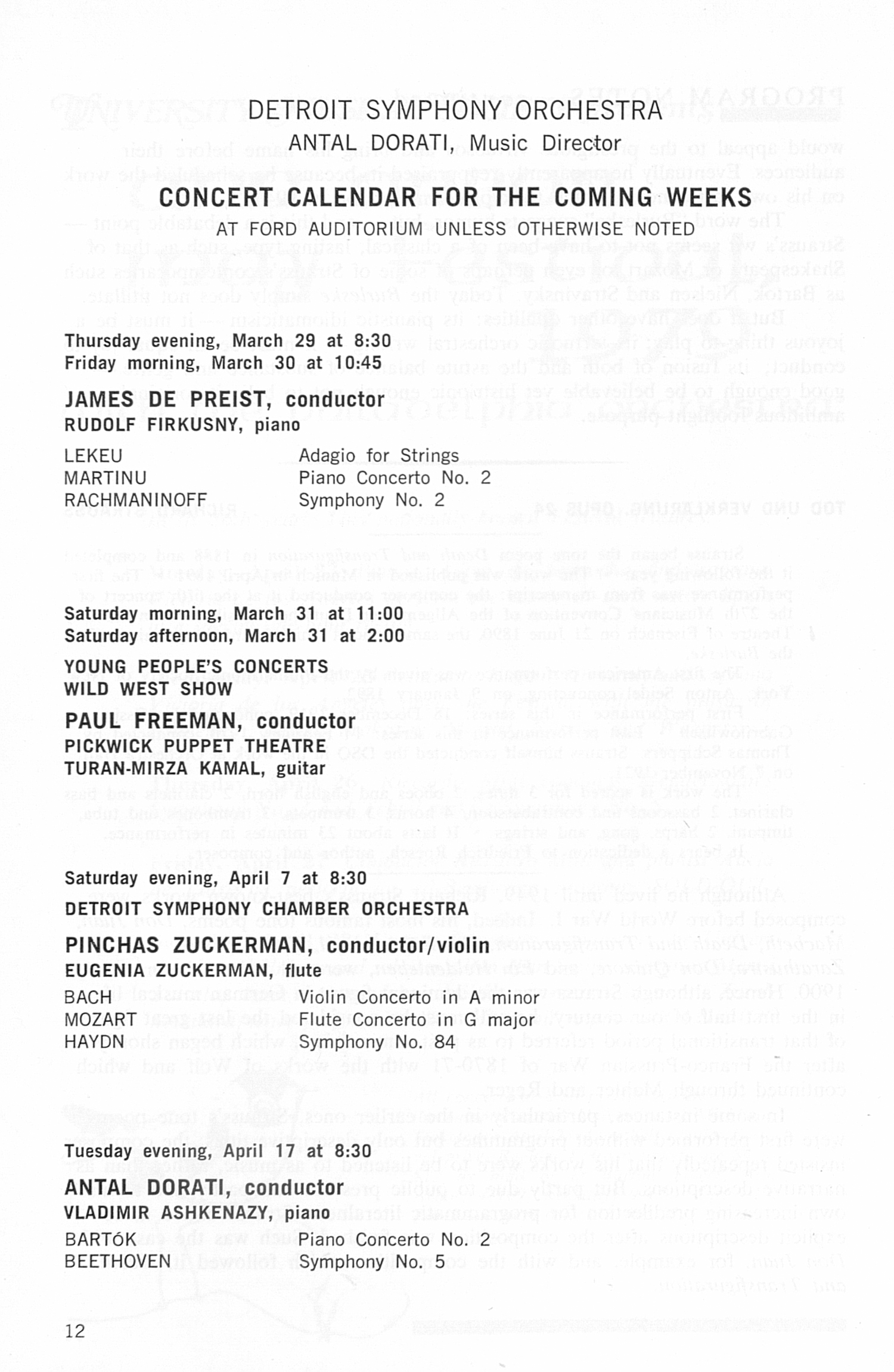 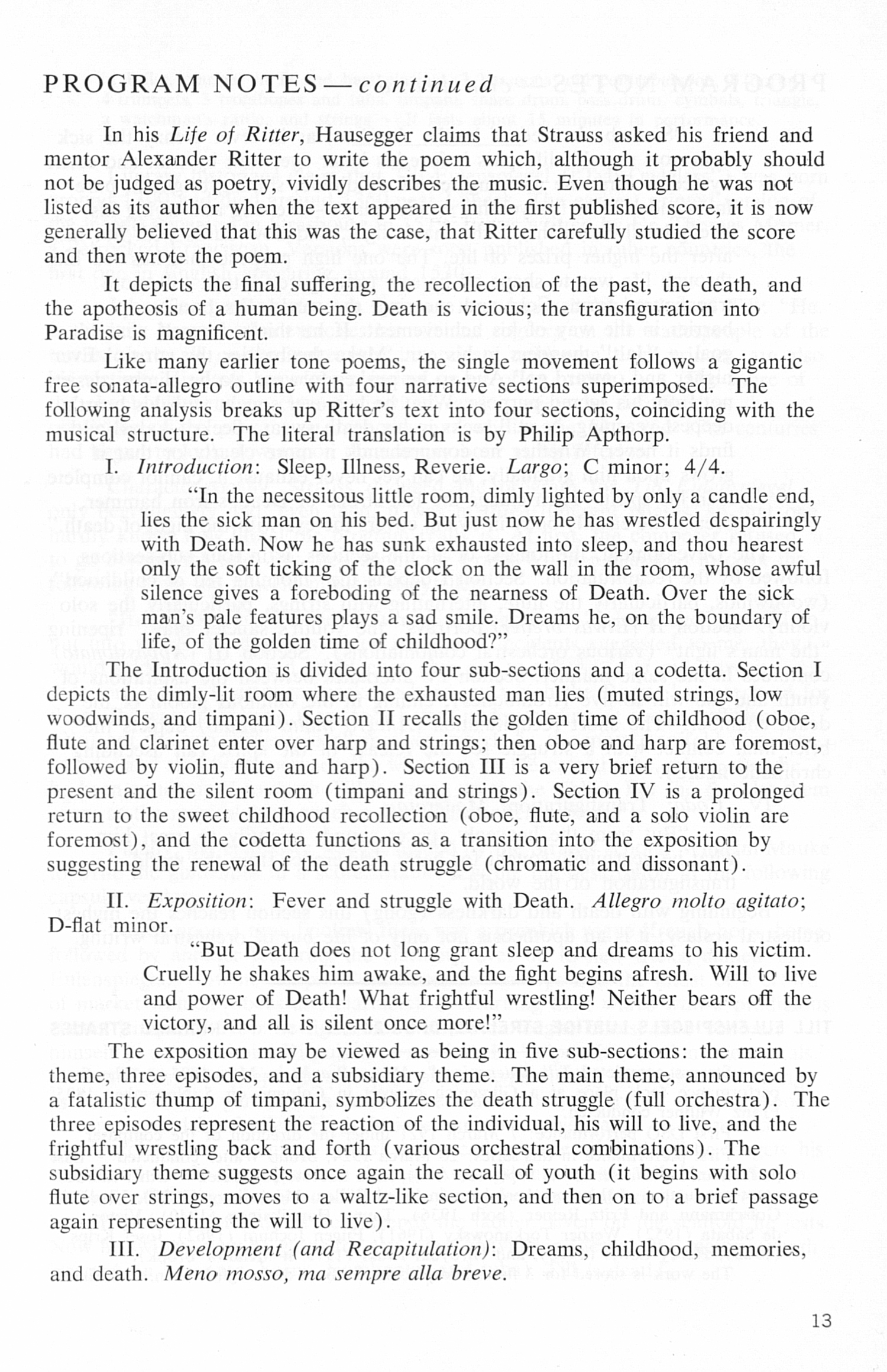 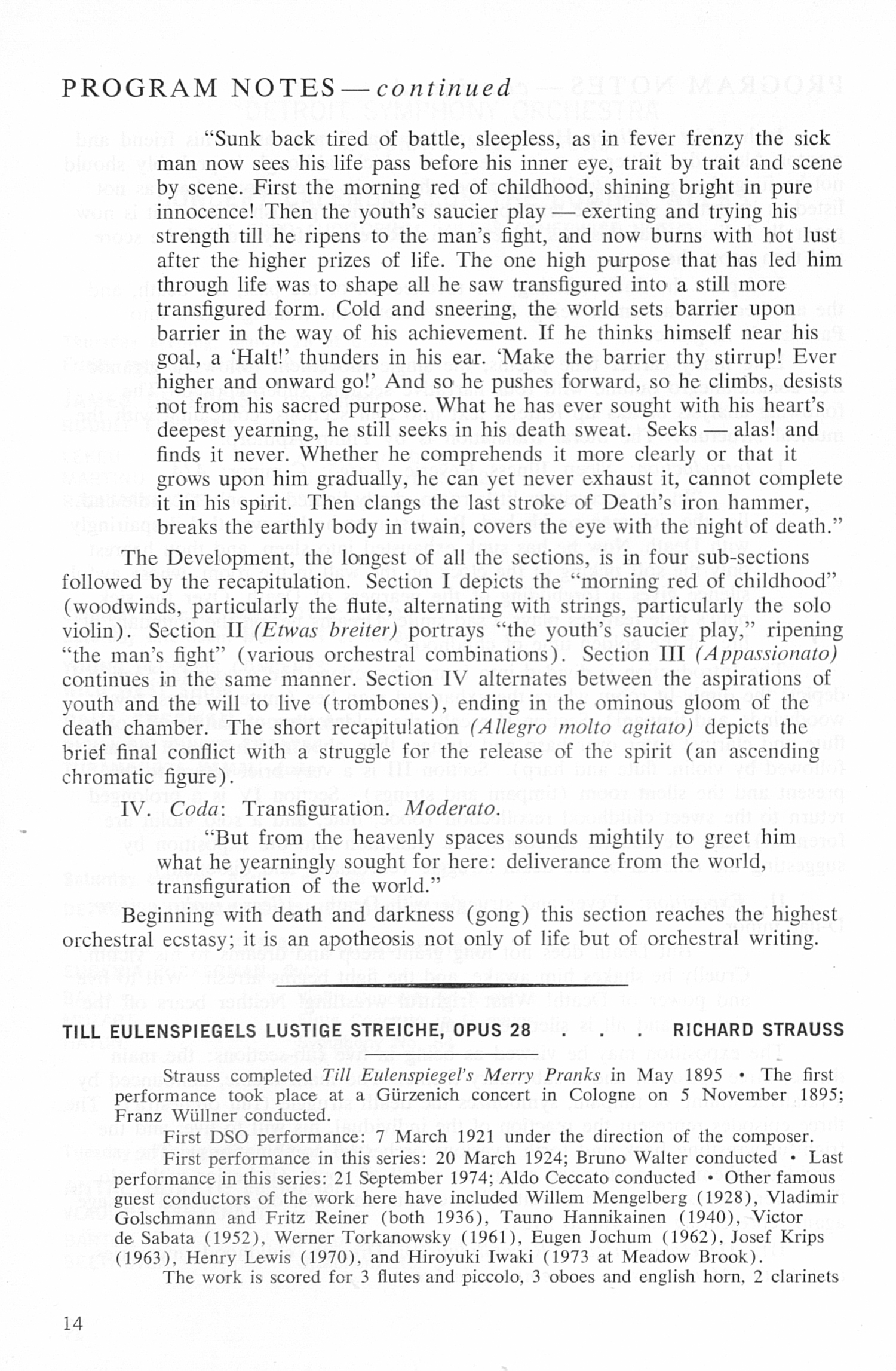 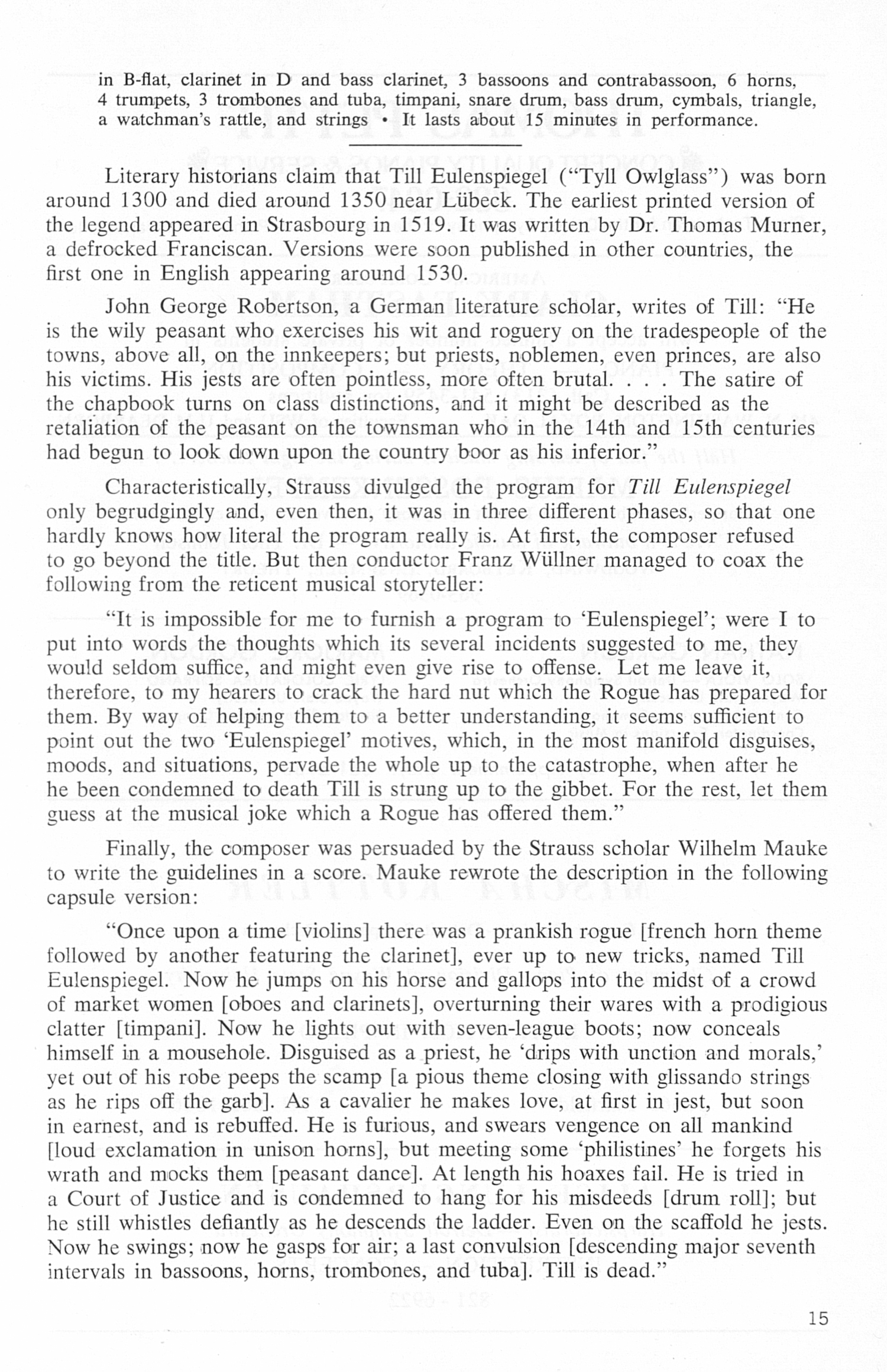 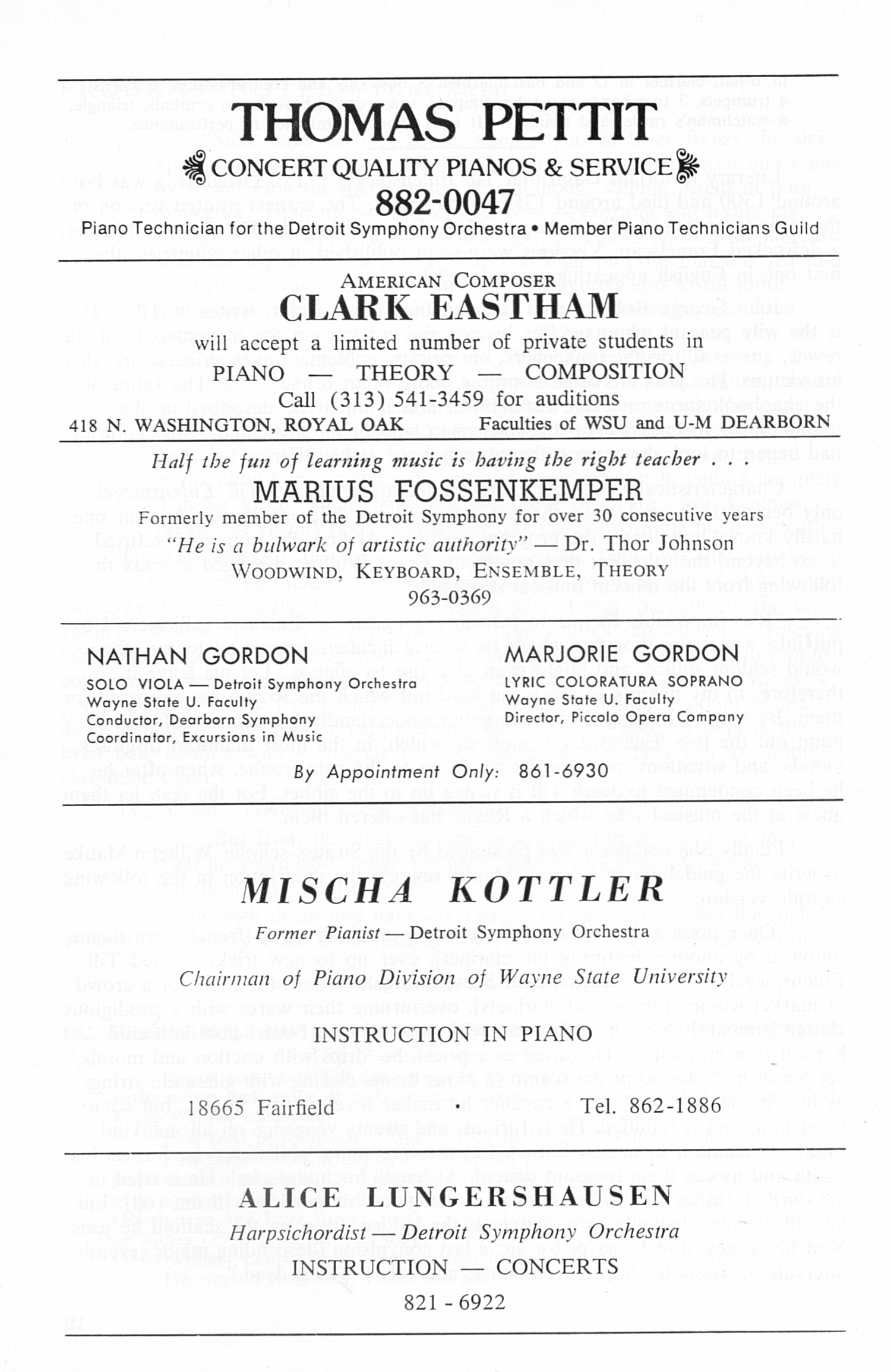 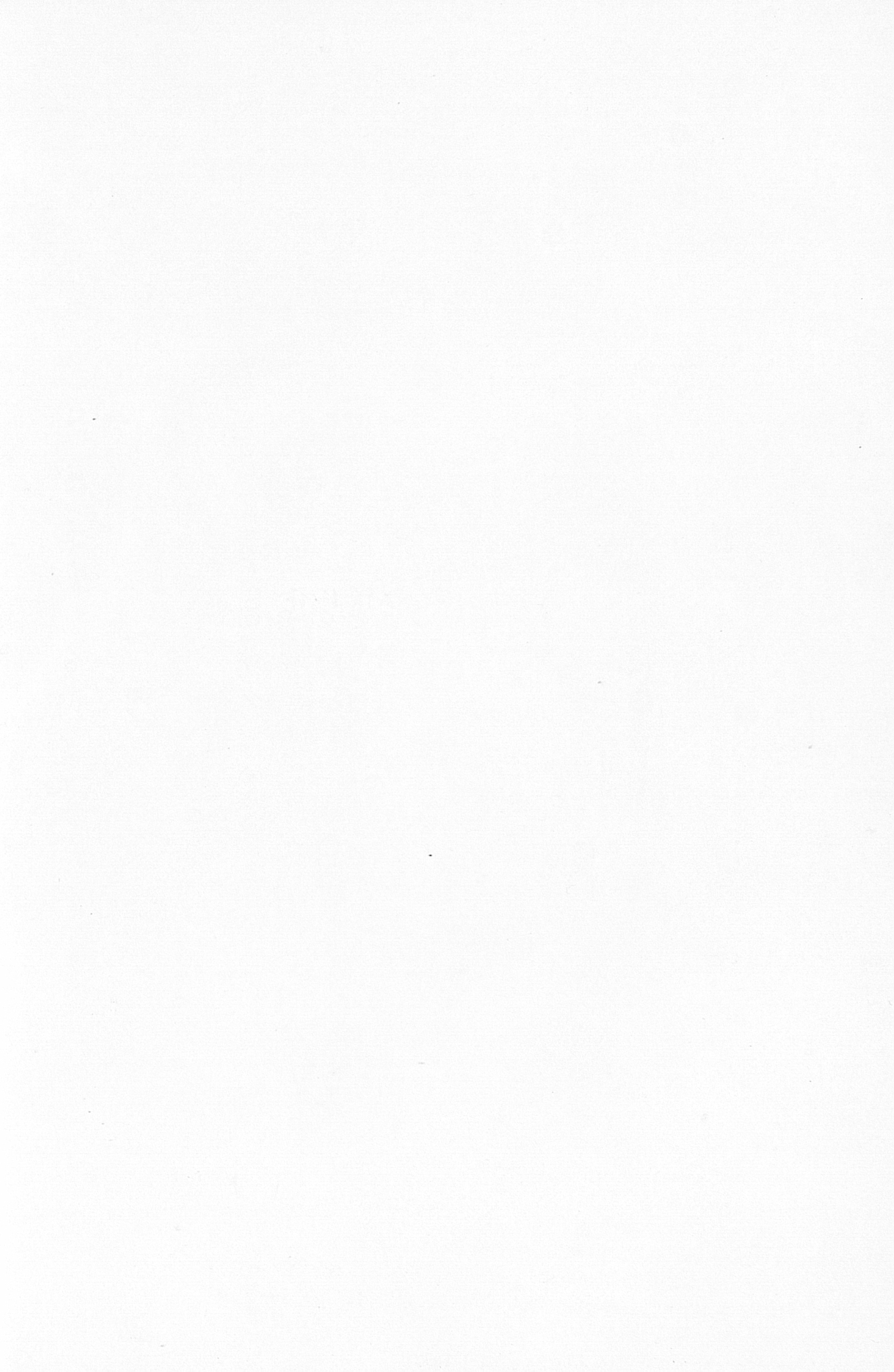 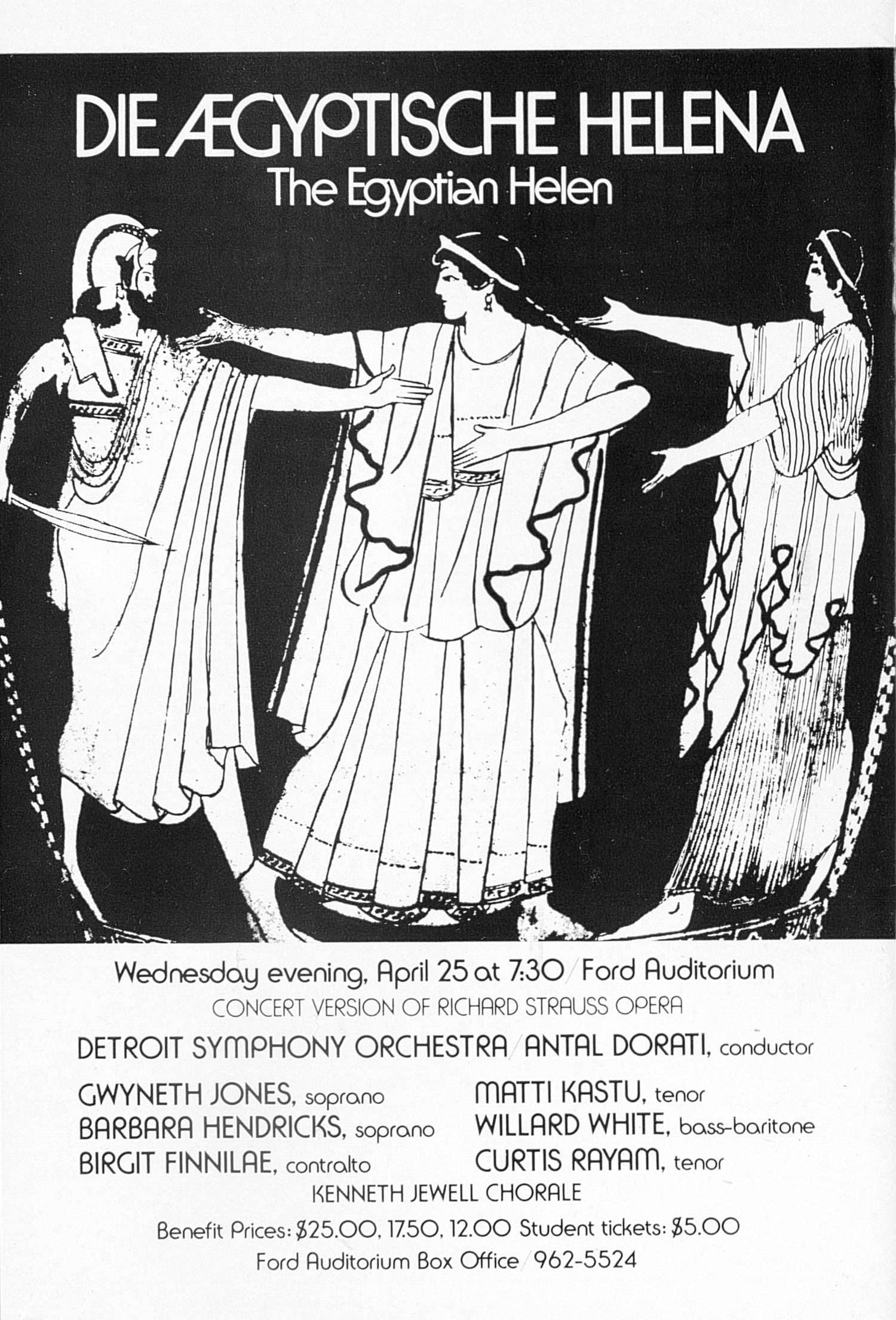 PROGRAM NOTES -continued
Here is a rather old-fashioned translation of Lenau's poem:
0 Magic realm, illimited, eternal,
Of glorified woman, -loveliness supernal! Fain would I, in the storm of stressful bliss, Expire upon the last one's lingering kiss! Through every realm, O friend, would wing my flight, Wherever Beauty blooms, kneel down to each, And, if for one brief moment, win delight!
1 flee from surfeit and from rapture's cloy, Keep fresh for Beauty service and employ, Grieving the One, that All I may enjoy.
The fragrance from one lip today is breath of spring;
The dungeon's gloom perchance tomorrow's luck may bring.
When with the new love I sweetly wander,
No bliss is ours upfurbish'd and regilded;
A different love has This to That one yonder,
Not up from ruins be my temples builded.
Yea, Love life is, and ever must be new,
Cannot be changed or turned in new direction;
It cannot but there expire -here resurrection;
And, if 'tis real, it nothing knows of rue!
Each beauty in the world is sole, unique;
So much the Love be that would Beauty seek!
So long as Youth lives on with pulse afire,
Out to the chase! To victories new aspire!
It was a wond'rous lovely storm that drove me: Now it is o'er; and calm all 'round, above me; Sheer dead is every wish; all hopes o'ershrouded,-'Twas pYaps a flash from heaven that so descended, Whose deadly stroke left me with powers ended, And all the world, so bright before, o'erclouded; And p'r'aps not! Exhausted is the fuel: And on the hearth cold is fiercely cruel.
Many writers have tried to make exactingly literal program music out of Strauss's version, identifying themes, and bits and pieces of themes, with specific characters, but Strauss was not quite that naive. Glenn McGeoch is right when he points out that it "is not program music strictly speaking; it tells no definite story or series of connected incidents; it is an exercise in musical psychology, a field in which Beethoven gave us Coriolanus, and Liszt essayed a portrait of Faust. In this work Strauss is a student of human nature and life, no less than an accomplished musician."
His whole career is symbolically mirrored in his own Don Juan, in the splendid vitality and high promise of his beginning, the subsequent period of cold and reckless perversity, the gradual oncoming of the inevitable nemesis of weariness of disillusion, until at last, the words of Lenau, on whose poem this work is ostensibly based, ergreift ihn
THIS WEEK'S GUEST ARTIST
Ilse von Alpenheim was born in Innsbruck, Austria, and made her debut at the age of nine. She studied at the Mozartcum in Salzburg with Franz Ledwinka and Winfried Wolf. Since then she has toured extensively all over Europe and has played with most of the major orchestras.
Ilse von Alpenheim has toured the U.S.A., Japan, Australia, New Zealand and other countries in the Far East on two world tours. In recent years she has played with many of the major American orchestras, including Detroit, Cleveland, Philadelphia and the National Symphony in Washington.
Among her recent recordings is the complete set of piano concertos by Joseph Haydn, and she is now finishing a complete set of Haydn's works for piano solo. One of her latest successes on the concert stage was the world premiere of her husband Antal Dorati's piano concerto in Washington in October 1975, and the European premiere of the same work in Berlin that December.
f ma o frldiil(f4i fUt) i
recital, att
tU 1 + o{f 7HCcAcC) t CCUHJUCA.!
Tickets at $4, $6, $7, $8.50, $10 and $12 arc Burton Tower, Ann Arbor 48109. Weekdays more information call (313)665-3717. available 9-4:30, K by mail or at Sat. 9-12. For