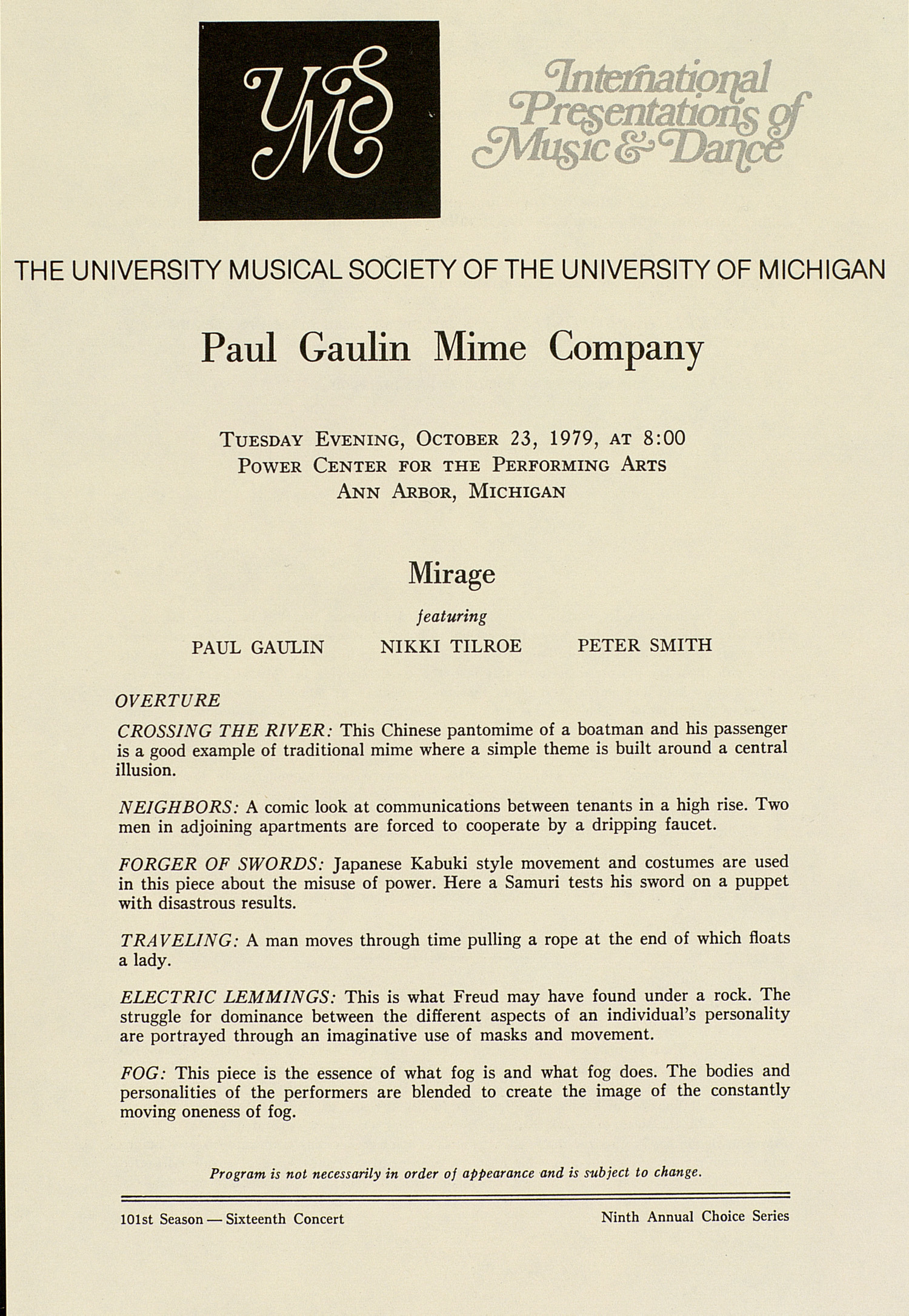 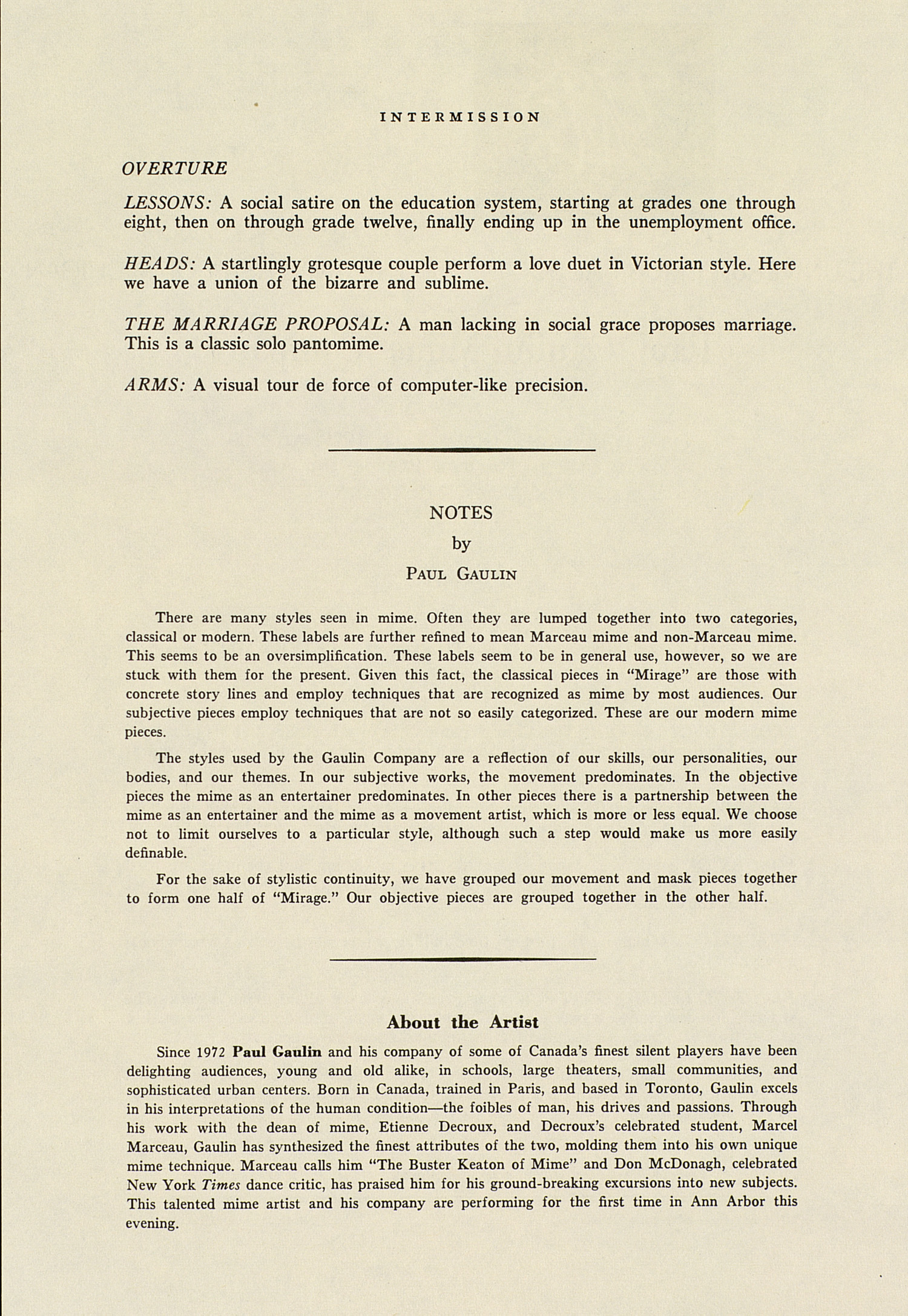 THE UNIVERSITY MUSICAL SOCIETY OF THE UNIVERSITY OF MICHIGAN
Paul Gaulin Mime Company
Tuesday Evening, October 23, 1979, at 8:00
Power Center for the Performing Arts
Ann Arbor, Michigan
PAUL GAULIN
Mirage
featuring NIKKI TILROE
PETER SMITH
OVERTURE
CROSSING THE RIVER: This Chinese pantomime of a boatman and his passenger is a good example of traditional mime where a simple theme is built around a central illusion.
NEIGHBORS: A comic look at communications between tenants in a high rise. Two men in adjoining apartments are forced to cooperate by a dripping faucet.
FORGER OF SWORDS: Japanese Kabuki style movement and costumes are used in this piece about the misuse of power. Here a Samuri tests his sword on a puppet with disastrous results.
TRAVELING: A man moves through time pulling a rope at the end of which floats a lady.
ELECTRIC LEMMINGS: This is what Freud may have found under a rock. The struggle for dominance between the different aspects of an individual's personality are portrayed through an imaginative use of masks and movement.
FOG: This piece is the essence of what fog is and what fog does. The bodies and personalities of the performers are blended to create the image of the constantly moving oneness of fog.
Program is not necessarily in order oj appearance and is subject to change.
101st Season -Sixteenth Concert
Ninth Annual Choice Series
INTERMISSION
OVERTURE
LESSONS: A social satire on the education system, starting at grades one through eight, then on through grade twelve, finally ending up in the unemployment office.
HEADS: A startlingly grotesque couple perform a love duet in Victorian style. Here we have a union of the bizarre and sublime.
THE MARRIAGE PROPOSAL: A man lacking in social grace proposes marriage. This is a classic solo pantomime.
ARMS: A visual tour de force of computer-like precision.
NOTES
by Paul Gaulin
There are many styles seen in mime. Often they are lumped together into two categories, classical or modern. These labels are further refined to mean Marceau mime and non-Marceau mime. This seems to be an oversimplification. These labels seem to be in general use, however, so we are stuck with them for the present. Given this fact, the classical pieces in "Mirage" are those with concrete story lines and employ techniques that are recognized as mime by most audiences. Our subjective pieces employ techniques that are not so easily categorized. These are our modern mime pieces.
The styles used by the Gaulin Company are a reflection of our skills, our personalities, our bodies, and our themes. In our subjective works, the movement predominates. In the objective pieces the mime as an entertainer predominates. In other pieces there is a partnership between the mime as an entertainer and the mime as a movement artist, which is more or less equal. We choose not to limit ourselves to a particular style, although such a step would make us more easily definable.
For the sake of stylistic continuity, we have grouped our movement and mask pieces together to form one half of "Mirage." Our objective pieces are grouped together in the other half.
About the Artist
Since 1972 Paul Gaulin and his company of some of Canada's finest silent players have been delighting audiences, young and old alike, in schools, large theaters, small communities, and sophisticated urban centers. Born in Canada, trained in Paris, and based in Toronto, Gaulin excels in his interpretations of the human condition--the foibles of man, his drives and passions. Through his work with the dean of mime, Etienne Decroux, and Decroux's celebrated student, Marcel Marceau, Gaulin has synthesized the finest attributes of the two, molding them into his own unique mime technique. Marceau calls him "The Buster Keaton of Mime" and Don McDonagh, celebrated New York Times dance critic, has praised him for his ground-breaking excursions into new subjects. This talented mime artist and his company are performing for the first time in Ann Arbor this evening.