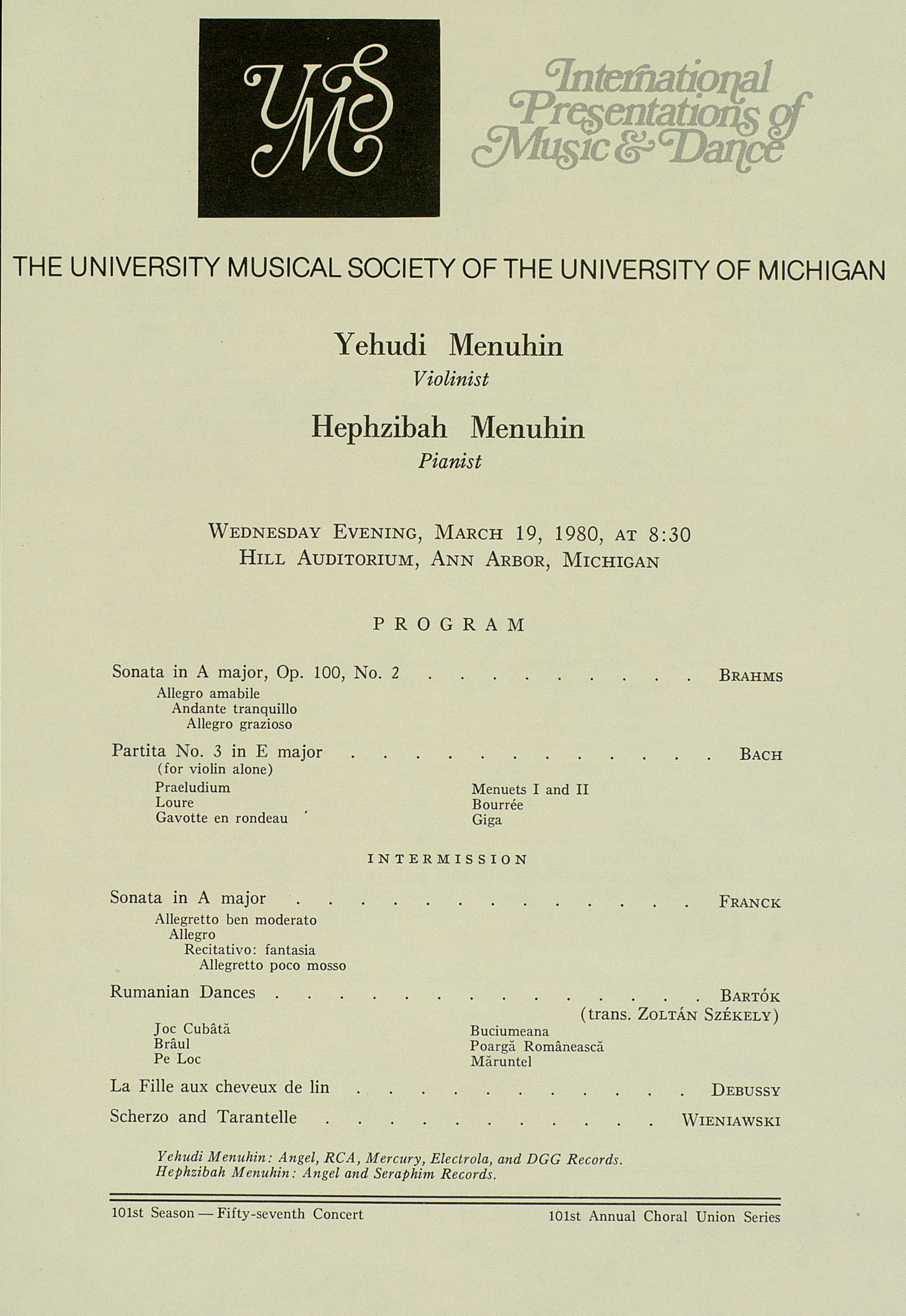 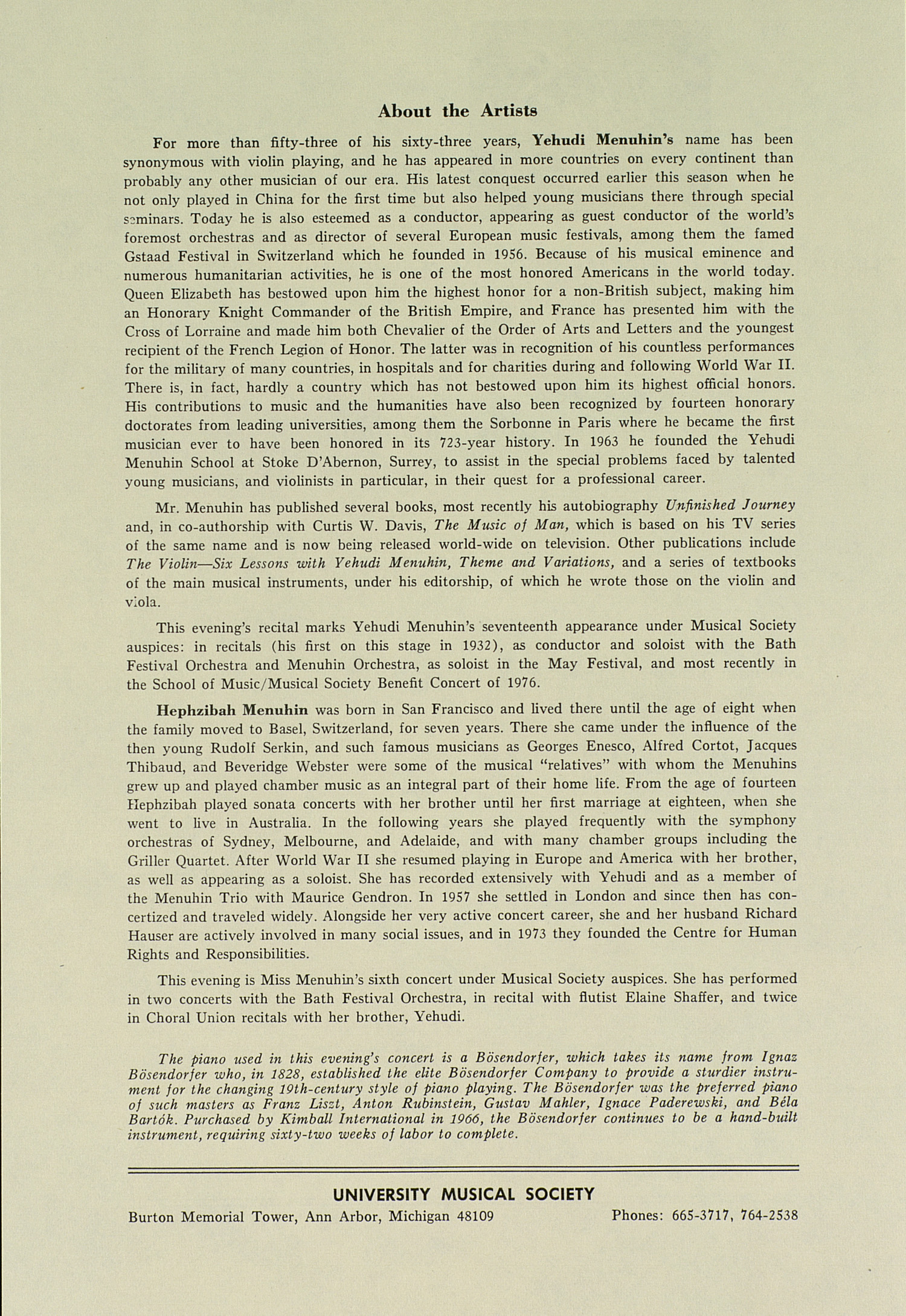 fatetiiational
THE UNIVERSITY MUSICAL SOCIETY OF THE UNIVERSITY OF MICHIGAN
Yehudi Menuhin
Violinist
Hephzibah Menuhin
Pianist
Wednesday Evening, March 19, 1980, at 8:30 Hill Auditorium, Ann Arbor, Michigan
PROGRAM
Sonata in A major, Op. 100, No. 2.........Brahms
Allegro amabile Andante tranquillo Allegro grazioso
Partita No. 3 in E major............Bach
(for violin alone)
Praeludium Menuets I and II
Loure Bourree
Gavotte en rondeau Giga
INTERMISSION
Sonata in A major.............Franck
Allegretto ben moderato Allegro
Recitativo: fantasia Allegretto poco mosso
Rumanian Dances..............Bartok
(trans. Zoltan Szekely)
Joe Cubata Buciumeana
Braul Poarga Romaneasca
Pe Loc Maruntel
La Fille aux cheveux de lin...........Debussy
Scherzo and Tarantelle...........Wieniawski
Yehudi Menuhin: Angel, RCA, Mercury, Electrola, and DGG Records. Hephzibah Menuhin: Angel and Seraphim Records.
101st Season -Fifty-seventh Concert 101st Annual Choral Union Series
About the Artists
For more than fifty-three of his sixty-three years, Yehudi Menuhin's name has been synonymous with violin playing, and he has appeared in more countries on every continent than probably any other musician of our era. His latest conquest occurred earlier this season when he not only played in China for the first time but also helped young musicians there through special seminars. Today he is also esteemed as a conductor, appearing as guest conductor of the world's foremost orchestras and as director of several European music festivals, among them the famed Gstaad Festival in Switzerland which he founded in 1956. Because of his musical eminence and numerous humanitarian activities, he is one of the most honored Americans in the world today. Queen Elizabeth has bestowed upon him the highest honor for a non-British subject, making him an Honorary Knight Commander of the British Empire, and France has presented him with the Cross of Lorraine and made him both Chevalier of the Order of Arts and Letters and the youngest recipient of the French Legion of Honor. The latter was in recognition of his countless performances for the military of many countries, in hospitals and for charities during and following World War II. There is, in fact, hardly a country which has not bestowed upon him its highest official honors. His contributions to music and the humanities have also been recognized by fourteen honorary doctorates from leading universities, among them the Sorbonne in Paris where he became the first musician ever to have been honored in its 723-year history. In 1963 he founded the Yehudi Menuhin School at Stoke D'Abernon, Surrey, to assist in the special problems faced by talented young musicians, and violinists in particular, in their quest for a professional career.
Mr. Menuhin has published several books, most recently his autobiography Unfinished Journey and, in co-authorship with Curtis W. Davis, The Music of Man, which is based on his TV series of the same name and is now being released world-wide on television. Other publications include The Violin--Six Lessons with Yehudi Menuhin, Theme and Variations, and a series of textbooks of the main musical instruments, under his editorship, of which he wrote those on the violin and viola.
This evening's recital marks Yehudi Menuhin's seventeenth appearance under Musical Society auspices: in recitals (his first on this stage in 1932), as conductor and soloist with the Bath Festival Orchestra and Menuhin Orchestra, as soloist in the May Festival, and most recently in the School of MusicMusical Society Benefit Concert of 1976.
Hephzibah Menuhin was born in San Francisco and lived there until the age of eight when the family moved to Basel, Switzerland, for seven years. There she came under the influence of the then young Rudolf Serkin, and such famous musicians as Georges Enesco, Alfred Cortot, Jacques Thibaud, and Beveridge Webster were some of the musical "relatives" with whom the Menuhins grew up and played chamber music as an integral part of their home life. From the age of fourteen Hephzibah played sonata concerts with her brother until her first marriage at eighteen, when she went to live in Australia. In the following years she played frequently with the symphony orchestras of Sydney, Melbourne, and Adelaide, and with many chamber groups including the Griller Quartet. After World War II she resumed playing in Europe and America with her brother, as well as appearing as a soloist. She has recorded extensively with Yehudi and as a member of the Menuhin Trio with Maurice Gcndron. In 19S7 she settled in London and since then has con-certizcd and traveled widely. Alongside her very active concert career, she and her husband Richard Hauser are actively involved in many social issues, and in 1973 they founded the Centre for Human Rights and Responsibilities.
This evening is Miss Menuhin's sixth concert under Musical Society auspices. She has performed in two concerts with the Bath Festival Orchestra, in recital with flutist Elaine Shaffer, and twice in Choral Union recitals with her brother, Yehudi.
The piano used in this evening's concert is a Bosendorfer, which takes its name from Ignaz Bosendorjer who, in 1828, established the elite Bosendorjer Company to provide a sturdier instru?ment for the changing 19th-century style oj piano playing. The Bosendorfer was the preferred piano of such masters as Franz Liszt, Anton Rubinstein, Guslav Mahler, Ignace Paderewski, and Bela Barlok. Purchased by Kimball International in 1966, the Bosendorjer continues to be a hand-built instrument, requiring sixty-two weeks of labor to complete.
UNIVERSITY MUSICAL SOCIETY
Burton Memorial Tower, Ann Arbor, Michigan 48109 Phones: 665-3717, 764-2538