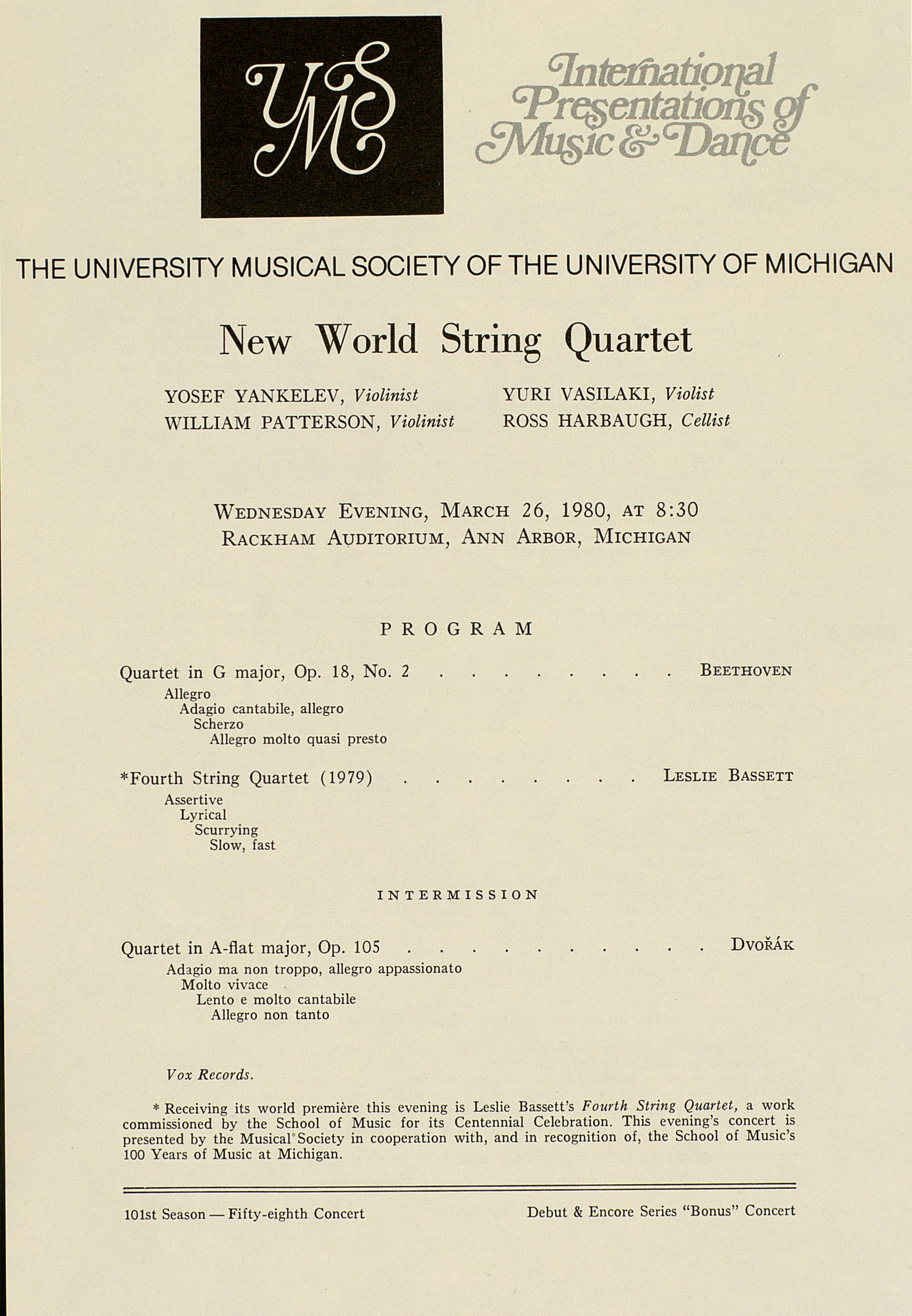 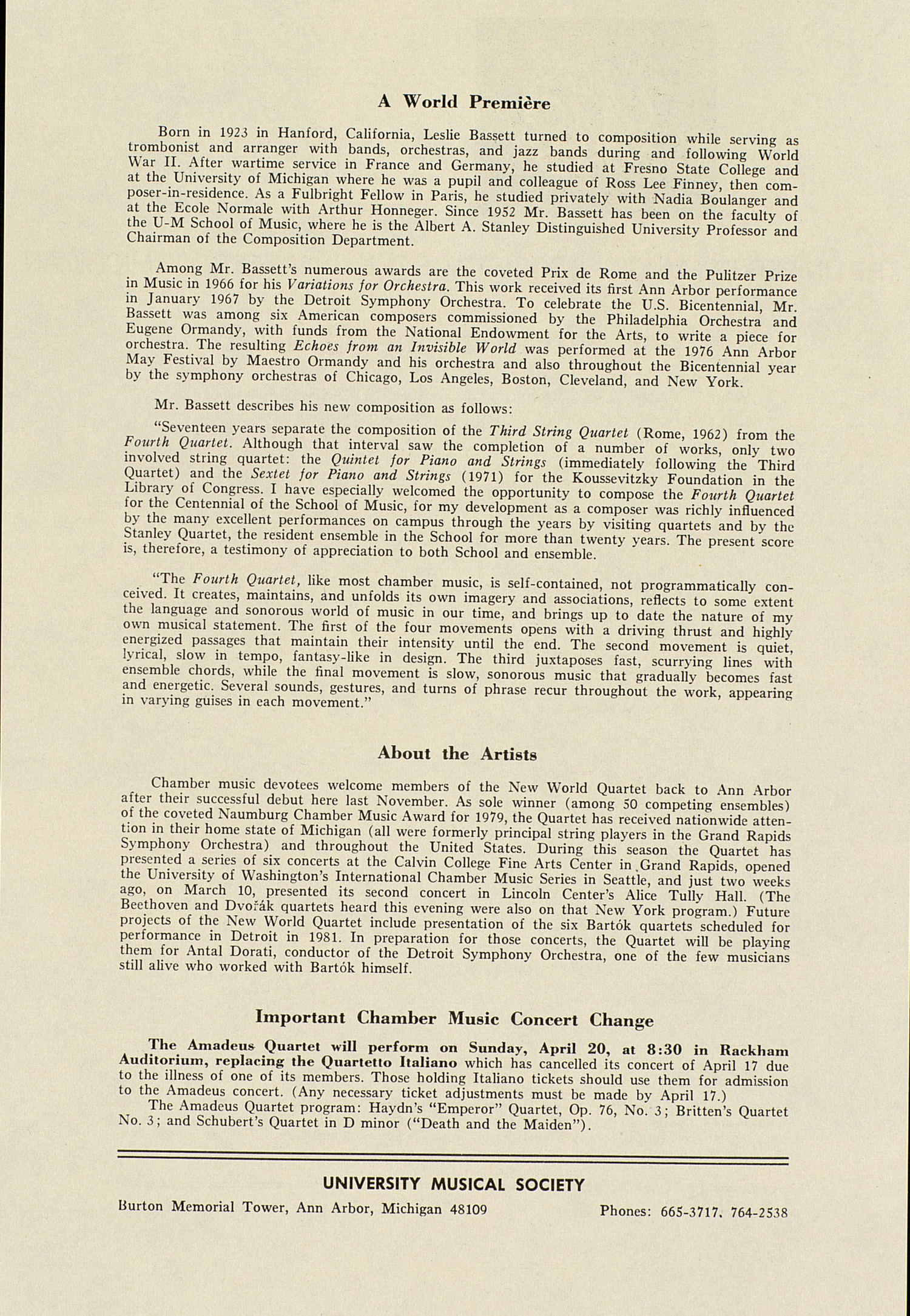 THE UNIVERSITY MUSICAL SOCIETY OF THE UNIVERSITY OF MICHIGAN
New World String Quartet
YOSEF YANKELEV, Violinist YURI VASILAKI, Violist
WILLIAM PATTERSON, Violinist ROSS HARBAUGH, Cellist
Wednesday Evening, March 26, 1980, at 8:30 Rackham Auditorium, Ann Arbor, Michigan
PROGRAM
Quartet in G major, Op. 18, No. 2........Beethoven
Allegro
Adagio cantabile, allegro Scherzo
Allegro molto quasi presto
?Fourth String Quartet (1979)........Leslie Bassett
Assertive Lyrical Scurrying Slow, fast
INTERMISSION
Quartet in A-flat major, Op. 105..........Dvorak
Adagio ma non troppo, allegro appassionato Molto vivace Lento e molto cantabile Allegro non tanto
Vox Records.
Receiving its world premiere this evening is Leslie Bassett's Fourth String Quartet, a work commissioned by the School of Music for its Centennial Celebration. This evening's concert is presented by the Musical'Society in cooperation with, and in recognition of, the School of Music's 100 Years of Music at Michigan.
101st Season -Fifty-eighth Concert Debut & Encore Series "Bonus" Concert
A World Premiere
Born in 1923 in Hanford, California, Leslie Bassett turned to composition while serving as trombonist and arranger with bands, orchestras, and jazz bands during and following World War II. After wartime service in France and Germany, he studied at Fresno State College and at the University of Michigan where he was a pupil and colleague of Ross Lee Finney, then com-poser-in-residence. As a Fulbright Fellow in Paris, he studied privately with Nadia Boulanger and at the Ecole Xormale with Arthur Honneger. Since 1952 Mr. Bassett has been on the faculty of the U-M School of Music, where he is the Albert A. Stanley Distinguished University Professor and Chairman of the Composition Department.
Among Mr. Bassett's numerous awards are the coveted Prix de Rome and the Pulitzer Prize in Music in 1966 for his Variations for Orchestra. This work received its first Ann Arbor performance in January 1967 by the Detroit Symphony Orchestra. To celebrate the U.S. Bicentennial, Mr. Bassett was among six American composers commissioned by the Philadelphia Orchestra and Eugene Ormandy, with funds from the National Endowment for the Arts, to write a piece for orchestra. The resulting Echoes from an Invisible World was performed at the 1976 Ann Arbor May Festival by Maestro Ormandy and his orchestra and also throughout the Bicentennial year by the symphony orchestras of Chicago, Los Angeles, Boston, Cleveland, and New York.
Mr. Bassett describes his new composition as follows:
"Seventeen years separate the composition of the Third Siring Quartet (Rome, 1962) from the Fourth Quartet. Although that interval saw the completion of a number of works, only two involved string quartet: the Quintet for Piano and Strings (immediately following the Third Quartet) and the Sextet for Piano and Strings (1971) for the Koussevitzky Foundation in the Library of Congress. I have especially welcomed the opportunity to compose the Fourth Quartet for the Centennial of the School of Music, for my development as a composer was richly influenced by the many excellent performances on campus through the years by visiting quartets and by the Stanley Quartet, the resident ensemble in the School for more than twenty years. The present score is, therefore, a testimony of appreciation to both School and ensemble.
"The Fourth Quartet, like most chamber music, is self-contained, not programmatically con?ceived. It creates, maintains, and unfolds its own imagery and associations, reflects to some extent the language and sonorous world of music in our time, and brings up to date the nature of my own musical statement. The first of the four movements opens with a driving thrust and highly energized passages that maintain their intensity until the end. The second movement is quiet, lyrical, slow in tempo, fantasy-like in design. The third juxtaposes fast, scurrying lines with ensemble chords, while the final movement is slow, sonorous music that gradually becomes fast and energetic. Several sounds, gestures, and turns of phrase recur throughout the work, appearing in varying guises in each movement."
About the Artists
Chamber music devotees welcome members of the New World Quartet back to Ann Arbor after their successful debut here last November. As sole winner (among 50 competing ensembles) of the coveted Naumburg Chamber Music Award for 1979, the Quartet has received nationwide atten?tion in their home state of Michigan (all were formerly principal string players in the Grand Rapids Symphony Orchestra) and throughout the United States. During this season the Quartet has presented a series of six concerts at the Calvin College Fine Arts Center in.Grand Rapids, opened the University of Washington's International Chamber Music Series in Seattle, and just two weeks ago, on March 10, presented its second concert in Lincoln Center's Alice Tully Hall. (The Beethoven and Dvorak quartets heard this evening were also on that New York program.) Future projects of the New World Quartet include presentation of the six Bartok quartets scheduled for performance in Detroit in 1981. In preparation for those concerts, the Quartet will be playing them for Antal Dorati, conductor of the Detroit Symphony Orchestra, one of the few musicians still alive who worked with Bartok himself.
Important Chamber Music Concert Change
The Anindeus Quartet will perform on Sunday, April 20, at 8:30 in Rackham Auditorium, replacing the Quarletto Italiano which has cancelled its concert of April 17 due to the illness of one of its members. Those holding Italiano tickets should use them for admission to the Amadeus concert. (Any necessary ticket adjustments must be made by April 17.)
The Amadeus Quartet program: Haydn's "Emperor" Quartet, Op. 76, No. 3; Britten's Quartet No. 3; and Schubert's Quartet in D minor ("Death and the Maiden").
UNIVERSITY MUSICAL SOCIETY
burton Memorial Tower, Ann Arbor, Michigan 48109 Phones: 665-3717. 764-2538