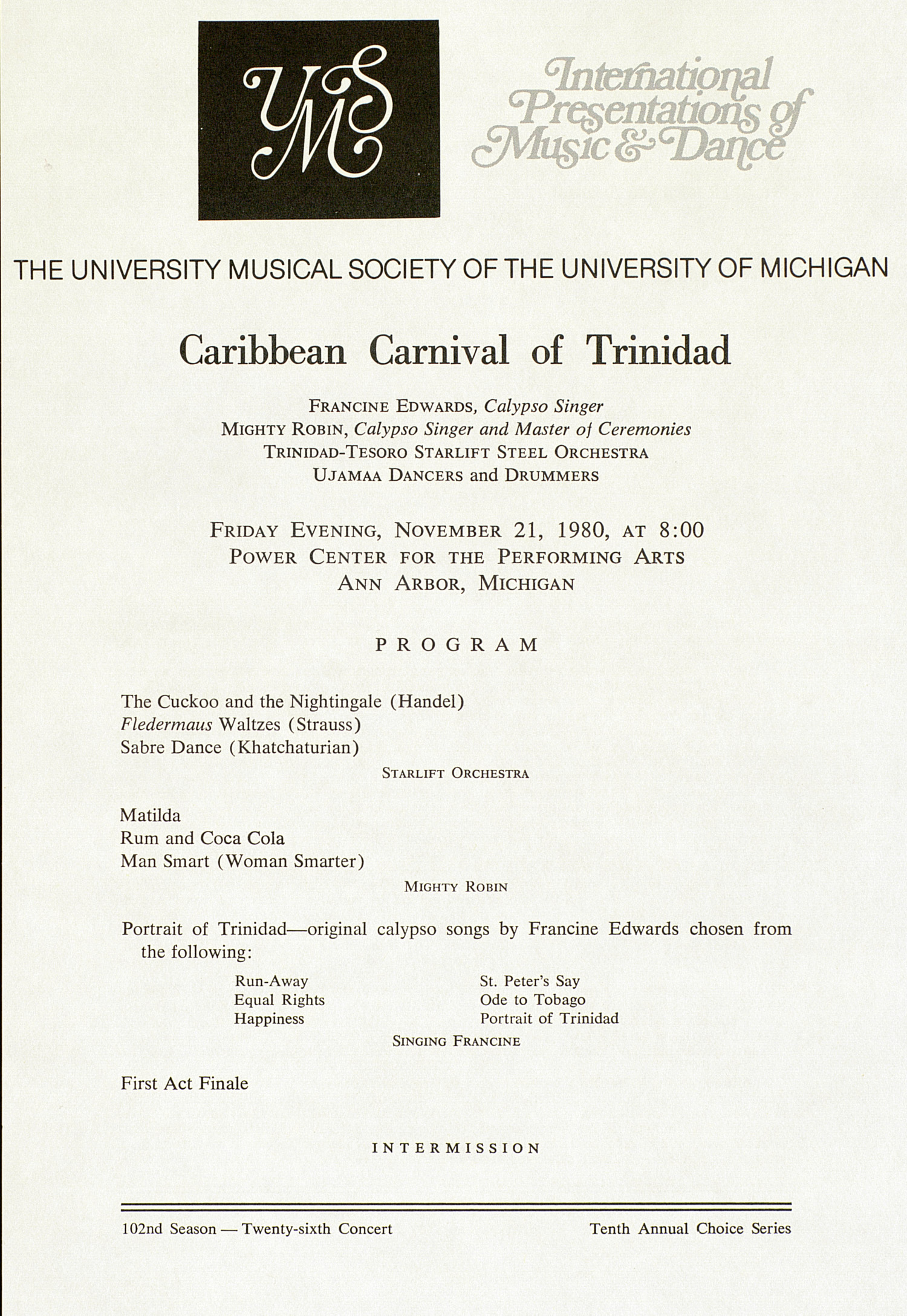 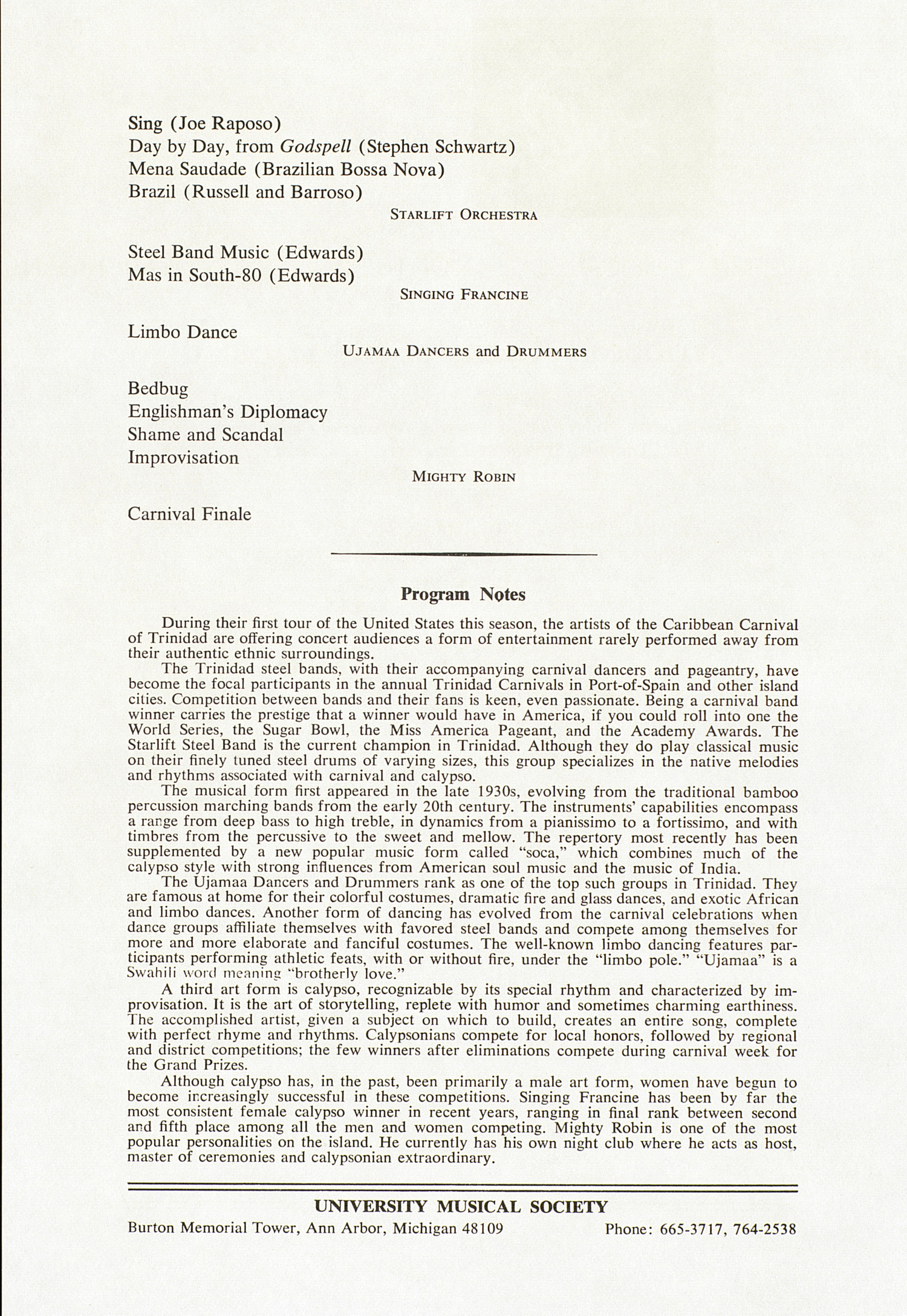 3ntafiational
THE UNIVERSITY MUSICAL SOCIETY OF THE UNIVERSITY OF MICHIGAN
Caribbean Carnival of Trinidad
Francine Edwards, Calypso Singer
Mighty Robin, Calypso Singer and Master of Ceremonies
Trinidad-Tesoro Starlift Steel Orchestra
Ujamaa Dancers and Drummers
Friday Evening, November 21, 1980, at 8:00
Power Center for the Performing Arts
Ann Arbor, Michigan
PROGRAM
The Cuckoo and the Nightingale (Handel) Fledermaus Waltzes (Strauss) Sabre Dance (Khatchaturian)
Starlift Orchestra
Matilda
Rum and Coca Cola
Man Smart (Woman Smarter)
Mighty Robin
Portrait of Trinidad--original calypso songs by Francine Edwards chosen from
the following:
Run-Away St. Peter's Say
Equal Rights Ode to Tobago
Happiness Portrait of Trinidad
Singing Francine
First Act Finale
INTERMISSION
102nd Season -Twenty-sixth Concert
Tenth Annual Choice Series
Sing (Joe Raposo)
Day by Day, from Godspell (Stephen Schwartz) Mena Saudade (Brazilian Bossa Nova) Brazil (Russell and Barroso)
Starlift Orchestra
Steel Band Music (Edwards)
Mas in South-80 (Edwards)
Singing Francine
Limbo Dance
Ujamaa Dancers and Drummers
Bedbug
Englishman's Diplomacy
Shame and Scandal
Improvisation
Mighty Robin
Carnival Finale
Program Notes
During their first tour of the United States this season, the artists of the Caribbean Carnival of Trinidad are offering concert audiences a form of entertainment rarely performed away from their authentic ethnic surroundings.
The Trinidad steel bands, with their accompanying carnival dancers and pageantry, have become the focal participants in the annual Trinidad Carnivals in Port-of-Spain and other island cities. Competition between bands and their fans is keen, even passionate. Being a carnival band winner carries the prestige that a winner would have in America, if you could roll into one the World Series, the Sugar Bowl, the Miss America Pageant, and the Academy Awards. The Starlift Steel Band is the current champion in Trinidad. Although they do play classical music on their finely tuned steel drums of varying sizes, this group specializes in the native melodies and rhythms associated with carnival and calypso.
The musical form first appeared in the late 1930s, evolving from the traditional bamboo percussion marching bands from the early 20th century. The instruments' capabilities encompass a range from deep bass to high treble, in dynamics from a pianissimo to a fortissimo, and with timbres from the percussive to the sweet and mellow. The repertory most recently has been supplemented by a new popular music form called "soca," which combines much of the calypso style with strong influences from American soul music and the music of India.
The Ujamaa Dancers and Drummers rank as one of the top such groups in Trinidad. They are famous at home for their colorful costumes, dramatic fire and glass dances, and exotic African and limbo dances. Another form of dancing has evolved from the carnival celebrations when dance groups affiliate themselves with favored steel bands and compete among themselves for more and more elaborate and fanciful costumes. The well-known limbo dancing features par?ticipants performing athletic feats, with or without fire, under the "limbo pole." "Ujamaa" is a Swahili word meaning "brotherly love."
A third art form is calypso, recognizable by its special rhythm and characterized by im?provisation. It is the art of storytelling, replete with humor and sometimes charming earthiness. The accomplished artist, given a subject on which to build, creates an entire song, complete with perfect rhyme and rhythms. Calypsonians compete for local honors, followed by regional and district competitions; the few winners after eliminations compete during carnival week for the Grand Prizes.
Although calypso has, in the past, been primarily a male art form, women have begun to become increasingly successful in these competitions. Singing Francine has been by far the most consistent female calypso winner in recent years, ranging in final rank between second and fifth place among all the men and women competing. Mighty Robin is one of the most popular personalities on the island. He currently has his own night club where he acts as host, master of ceremonies and calypsonian extraordinary.
UNIVERSITY MUSICAL SOCIETY
Burton Memorial Tower, Ann Arbor, Michigan 48109 Phone: 665-3717, 764-2538