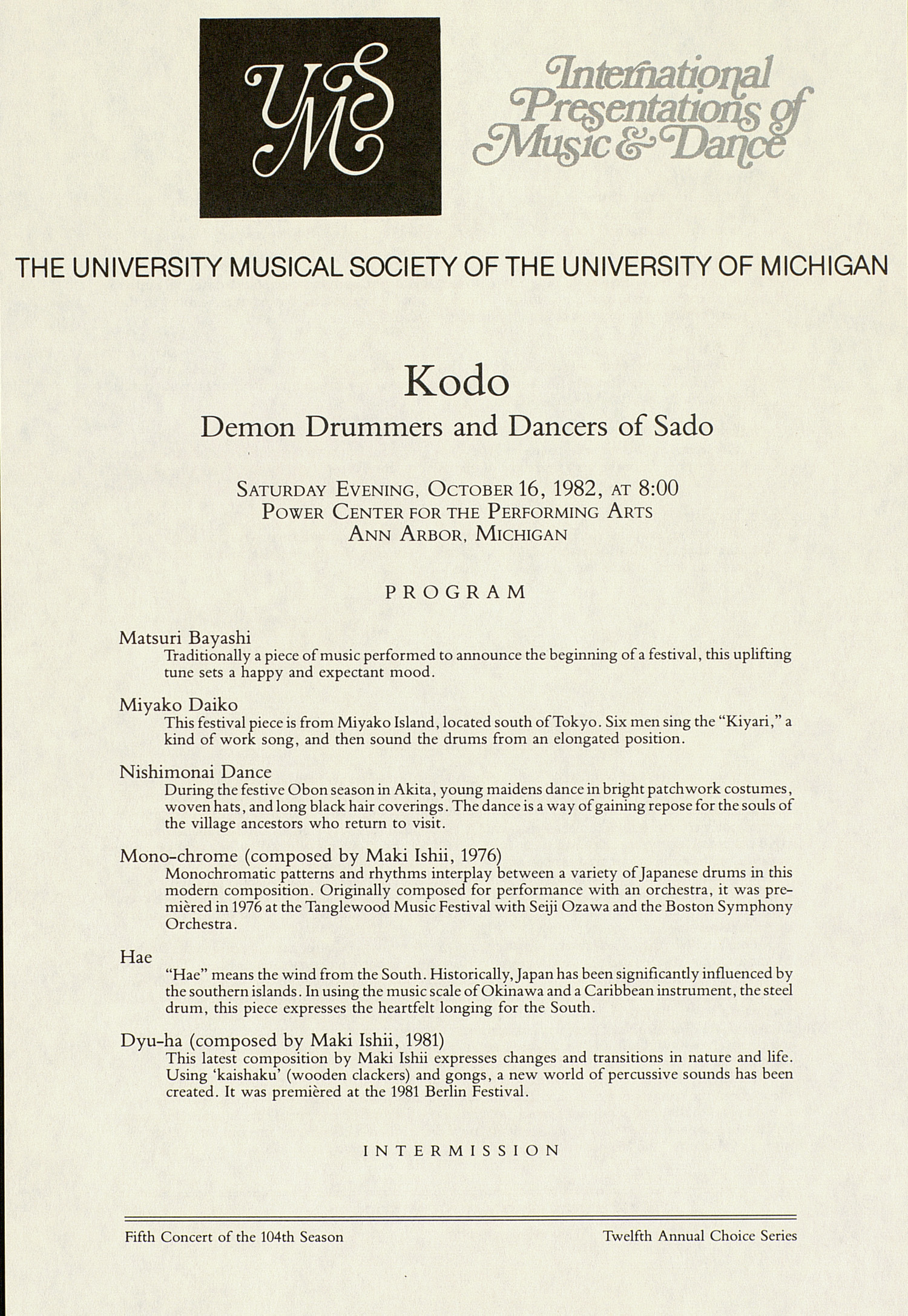 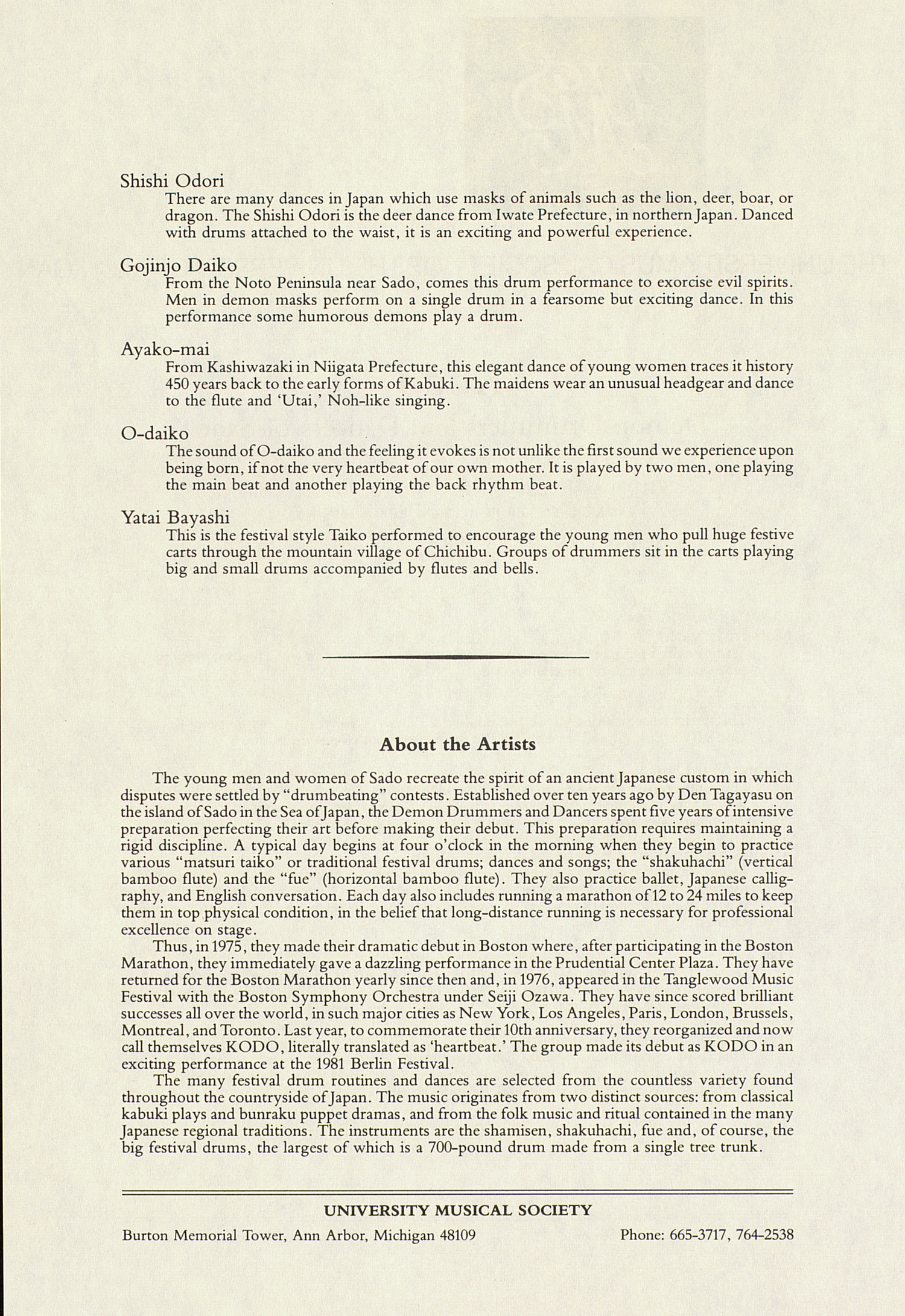 lnteiftatipnal
THE UNIVERSITY MUSICAL SOCIETY OF THE UNIVERSITY OF MICHIGAN
Kodo
Demon Drummers and Dancers of Sado
Saturday Evening, October 16, 1982, at 8:00
Power Center for the Performing Arts
Ann Arbor, Michigan
PROGRAM
Matsuri Bayashi
Traditionally a piece of music performed to announce the beginning of a festival, this uplifting tune sets a happy and expectant mood.
Miyako Daiko
This festival piece is from Miyako Island, located south of Tokyo. Six men sing the "Kiyari," a kind of work song, and then sound the drums from an elongated position.
Nishimonai Dance
During the festive Obon season in Akita, young maidens dance in bright patchwork costumes, woven hats, and long black hair coverings. The dance is a way of gaining repose for the souls of the village ancestors who return to visit.
Mono-chrome (composed by Maki Ishii, 1976)
Monochromatic patterns and rhythms interplay between a variety of Japanese drums in this modern composition. Originally composed for performance with an orchestra, it was pre?miered in 1976 at the Tanglewood Music Festival with Seiji Ozawa and the Boston Symphony Orchestra.
Hae
"Hae" means the wind from the South. Historically, Japan has been significantly influenced by the southern islands. In using the music scale of Okinawa and a Caribbean instrument, the steel drum, this piece expresses the heartfelt longing for the South.
Dyu-ha (composed by Maki Ishii, 1981)
This latest composition by Maki Ishii expresses changes and transitions in nature and life. Using 'kaishaku' (wooden clackers) and gongs, a new world of percussive sounds has been created. It was premiered at the 1981 Berlin Festival.
INTERMISSION Fifth Concert of the 104th Season Twelfth Annual Choice Series
Shishi Odori
There are many dances in Japan which use masks of animals such as the lion, deer, boar, or dragon. The Shishi Odori is the deer dance from Iwate Prefecture, in northern Japan. Danced with drums attached to the waist, it is an exciting and powerful experience.
Gojinjo Daiko
From the Noto Peninsula near Sado, comes this drum performance to exorcise evil spirits. Men in demon masks perform on a single drum in a fearsome but exciting dance. In this performance some humorous demons play a drum.
Ayako-mai
From Kashiwazaki in Niigata Prefecture, this elegant dance of young women traces it history 450 years back to the early forms of Kabuki. The maidens wear an unusual headgear and dance to the flute and 'Utai,' Noh-like singing.
O-daiko
The sound of O-daiko and the feeling it evokes is not unlike the first sound we experience upon being born, if not the very heartbeat of our own mother. It is played by two men, one playing the main beat and another playing the back rhythm beat.
Yatai Bayashi
This is the festival style Taiko performed to encourage the young men who pull huge festive carts through the mountain village of Chichibu. Groups of drummers sit in the carts playing big and small drums accompanied by flutes and bells.
About the Artists
The young men and women of Sado recreate the spirit of an ancient Japanese custom in which disputes were settled by "drumbeating" contests. Established over ten years ago by Den Tagayasu on the island of Sado in the Sea of Japan, the Demon Drummers and Dancers spent five years of intensive preparation perfecting their art before making their debut. This preparation requires maintaining a rigid discipline. A typical day begins at four o'clock in the morning when they begin to practice various "matsuri taiko" or traditional festival drums; dances and songs; the "shakuhachi" (vertical bamboo flute) and the "fue" (horizontal bamboo flute). They also practice ballet, Japanese callig?raphy, and English conversation. Each day also includes running a marathon of 12 to 24 miles to keep them in top physical condition, in the belief that long-distance running is necessary for professional excellence on stage.
Thus, in 1975, they made their dramatic debut in Boston where, after participating in the Boston Marathon, they immediately gave a dazzling performance in the Prudential Center Plaza. They have returned for the Boston Marathon yearly since then and, in 1976, appeared in the Tanglcwood Music Festival with the Boston Symphony Orchestra under Seiji Ozawa. They have since scored brilliant successes all over the world, in such major cities as New York, Los Angeles, Paris, London, Brussels, Montreal, and Toronto. Last year, to commemorate their 10th anniversary, they reorganized and now call themselves KODO, literally translated as 'heartbeat.' The group made its debut as KODO in an exciting performance at the 1981 Berlin Festival.
The many festival drum routines and dances are selected from the countless variety found throughout the countryside of Japan. The music originates from two distinct sources: from classical kabuki plays and bunraku puppet dramas, and from the folk music and ritual contained in the many Japanese regional traditions. The instruments are the shamisen, shakuhachi, fuc and, of course, the big festival drums, the largest of which is a 700-pound drum made from a single tree trunk.
UNIVERSITY MUSICAL SOCIETY
Burton Memorial Tower, Ann Arbor, Michigan 48109 Phone: 665-3717, 764-2538