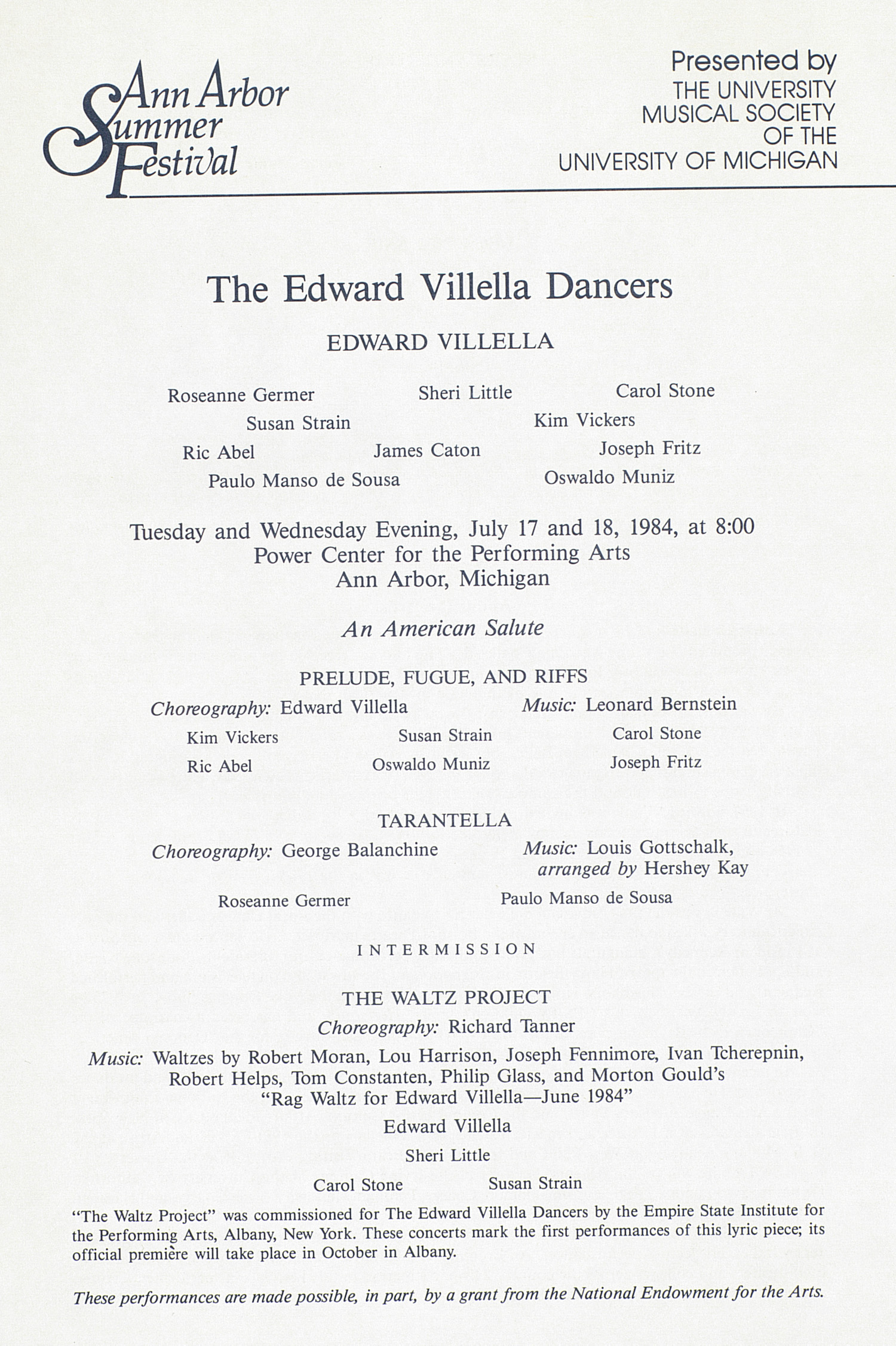 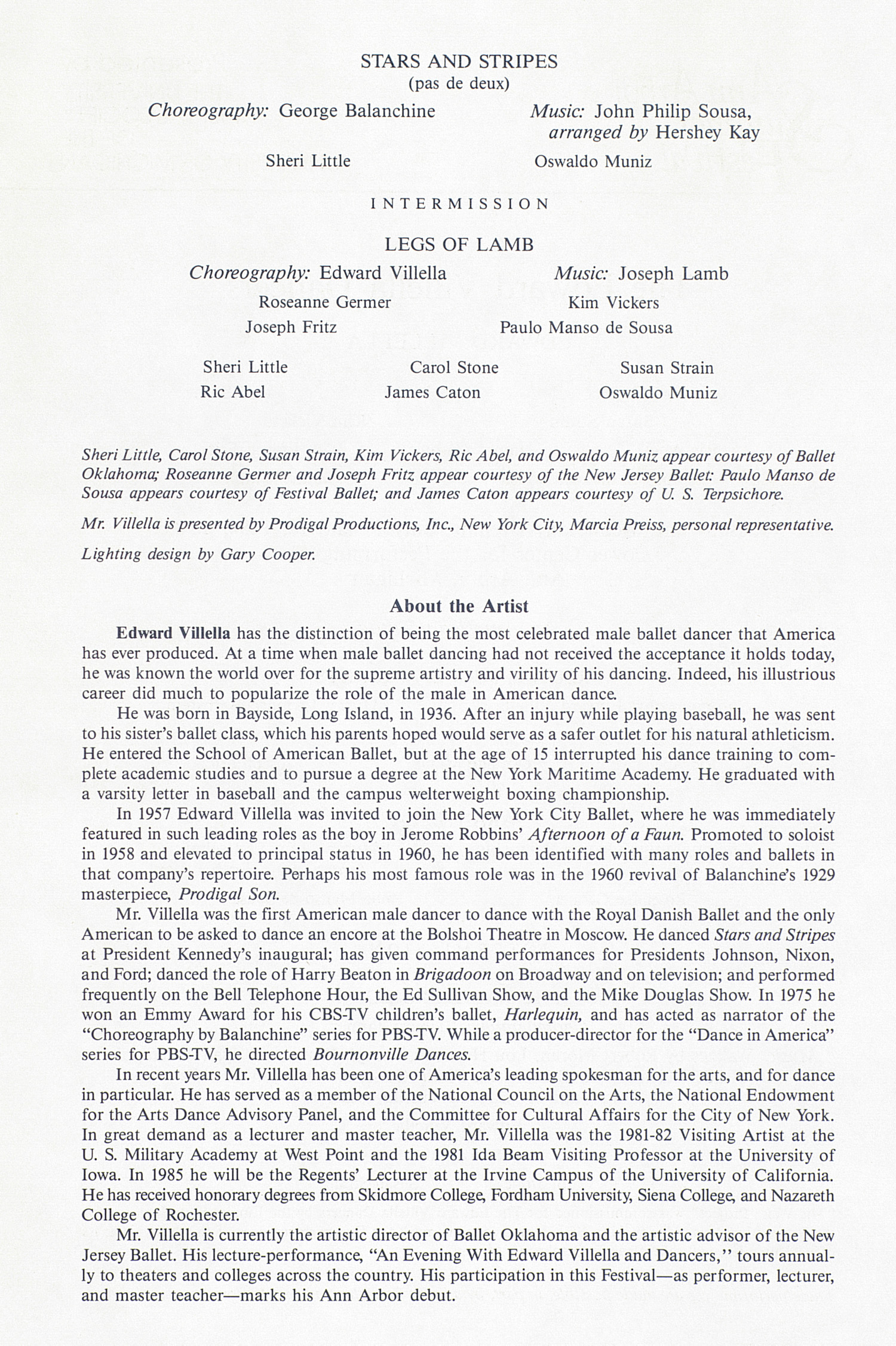 Presented by
the university
MUSICAL SOCIETY OF THE
UNIVERSITY OF MICHIGAN
The Edward Villella Dancers
EDWARD VILLELLA
Roseanne Germer Sheri Little Carol Stone
Susan Strain Kim Vickers
Ric Abel James Caton Joseph Fritz
Paulo Manso de Sousa Oswaldo Muniz
Tuesday and Wednesday Evening, July 17 and 18, 1984, at 8:00
Power Center for the Performing Arts
Ann Arbor, Michigan
An American Salute
PRELUDE, FUGUE, AND RIFFS
Choreography: Edward Villella Music: Leonard Bernstein
Kim Vickers Susan Strain Carol Stone
Ric Abel Oswaldo Muniz Joseph Fritz
TARANTELLA
Choreography: George Balanchine Music: Louis Gottschalk,
arranged by Hershey Kay
Roseanne Germer Paulo Manso de Sousa
INTERMISSION
THE WALTZ PROJECT
Choreography: Richard Tanner
Music: Waltzes by Robert Moran, Lou Harrison, Joseph Fennimore, Ivan Tcherepnin,
Robert Helps, Tom Constanten, Philip Glass, and Morton Gould's
"Rag Waltz for Edward Villella--June 1984"
Edward Villella
Sheri Little Carol Stone Susan Strain
"The Waltz Project" was commissioned for The Edward Villella Dancers by the Empire State Institute for the Performing Arts, Albany, New York. These concerts mark the first performances of this lyric piece; its official premiere will take place in October in Albany.
These performances are made possible, in part, by a grant from the National Endowment for the Arts.
STARS AND STRIPES
(pas de deux)
Choreography: George Balanchine Music: John Philip Sousa,
arranged by Hershey Kay
Sheri Little Oswaldo Muniz
INTERMISSION
LEGS OF LAMB Choreography: Edward Villella Music: Joseph Lamb
Roseanne Germer Kim Vickers
Joseph Fritz Paulo Manso de Sousa
Sheri Little Carol Stone Susan Strain
Ric Abel James Caton Oswaldo Muniz
Sheri Little, Carol Stone, Susan Strain, Kim Vickers, Ric Abel, and Oswaldo Muniz appear courtesy of Ballet Oklahoma; Roseanne Germer and Joseph Fritz appear courtesy of the New Jersey Ballet: Paulo Manso de Sousa appears courtesy of Festival Ballet; and James Caton appears courtesy of U. S. Terpsichore.
Mr. Villella is presented by Prodigal Productions, Inc., New York City, Marcia Preiss, personal representative. Lighting design by Gary Cooper.
About the Artist
Edward Villella has the distinction of being the most celebrated male ballet dancer that America has ever produced. At a time when male ballet dancing had not received the acceptance it holds today, he was known the world over for the supreme artistry and virility of his dancing. Indeed, his illustrious career did much to popularize the role of the male in American dance.
He was born in Bayside, Long Island, in 1936. After an injury while playing baseball, he was sent to his sister's ballet class, which his parents hoped would serve as a safer outlet for his natural athleticism. He entered the School of American Ballet, but at the age of 15 interrupted his dance training to com?plete academic studies and to pursue a degree at the New York Maritime Academy. He graduated with a varsity letter in baseball and the campus welterweight boxing championship.
In 1957 Edward Villella was invited to join the New York City Ballet, where he was immediately featured in such leading roles as the boy in Jerome Robbins' Afternoon of a Faun. Promoted to soloist in 1958 and elevated to principal status in 1960, he has been identified with many roles and ballets in that company's repertoire. Perhaps his most famous role was in the 1960 revival of Balanchine's 1929 masterpiece, Prodigal Son.
Mr. Villella was the first American male dancer to dance with the Royal Danish Ballet and the only American to be asked to dance an encore at the Bolshoi Theatre in Moscow. He danced Stars and Stripes at President Kennedy's inaugural; has given command performances for Presidents Johnson, Nixon, and Ford; danced the role of Harry Beaton in Brigadoon on Broadway and on television; and performed frequently on the Bell Telephone Hour, the Ed Sullivan Show, and the Mike Douglas Show. In 1975 he won an Emmy Award for his CBSTV children's ballet, Harlequin, and has acted as narrator of the "Choreography by Balanchine" series for PBSTV. While a producerdirector for the "Dance in America" series for PBSTV, he directed Bournonville Dances.
In recent years Mr. Villella has been one of America's leading spokesman for the arts, and for dance in particular. He has served as a member of the National Council on the Arts, the National Endowment for the Arts Dance Advisory Panel, and the Committee for Cultural Affairs for the City of New York. In great demand as a lecturer and master teacher, Mr. Villella was the 198182 Visiting Artist at the U. S. Military Academy at West Point and the 1981 Ida Beam Visiting Professor at the University of Iowa. In 1985 he will be the Regents' Lecturer at the Irvine Campus of the University of California. He has received honorary degrees from Skidmore College, Fordham University, Siena College, and Nazareth College of Rochester.
Mr. Villella is currently the artistic director of Ballet Oklahoma and the artistic advisor of the New Jersey Ballet. His lectureperformance, "An Evening With Edward Villella and Dancers," tours annual?ly to theaters and colleges across the country. His participation in this Festival--as performer, lecturer, and master teacher--marks his Ann Arbor debut.