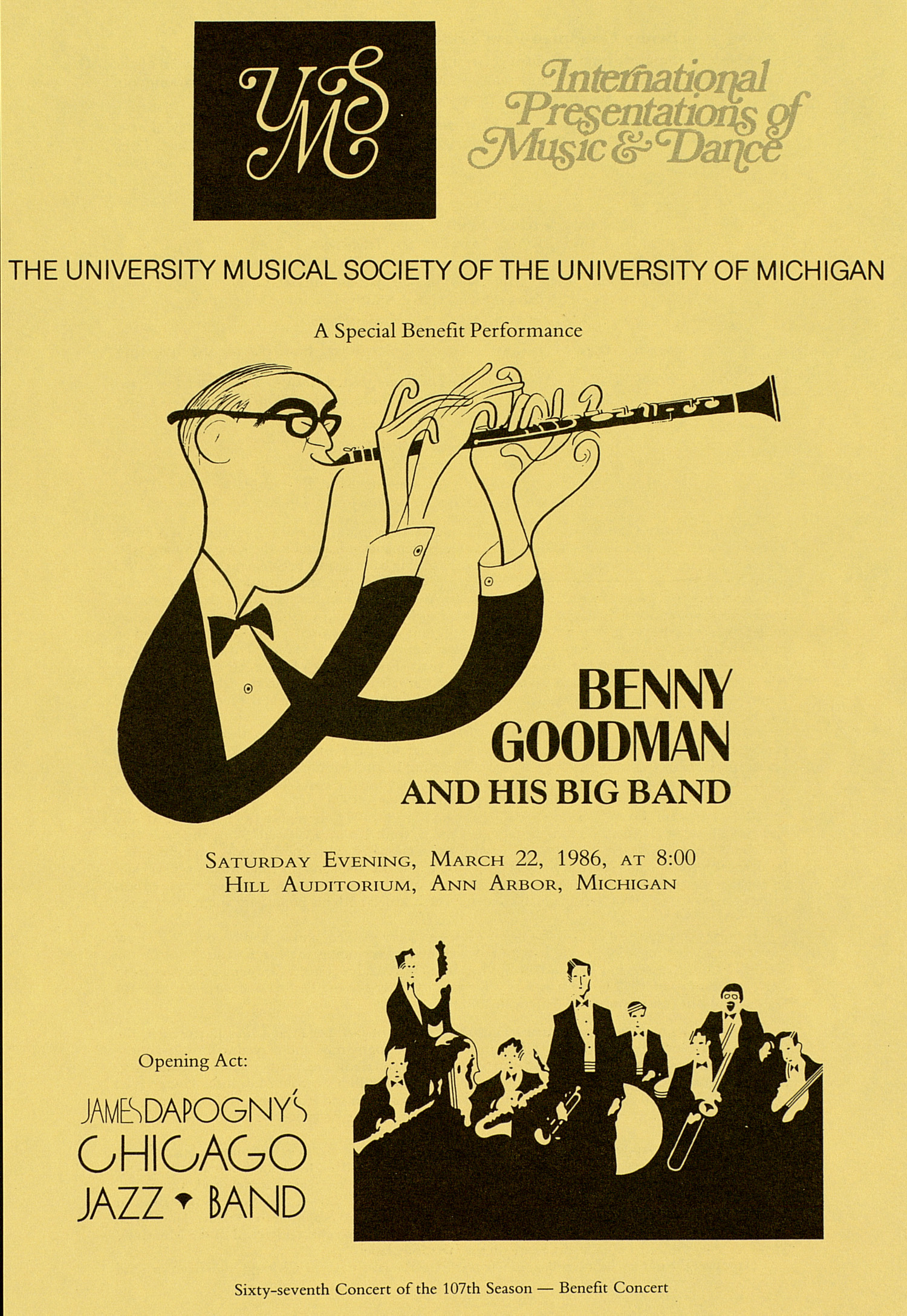 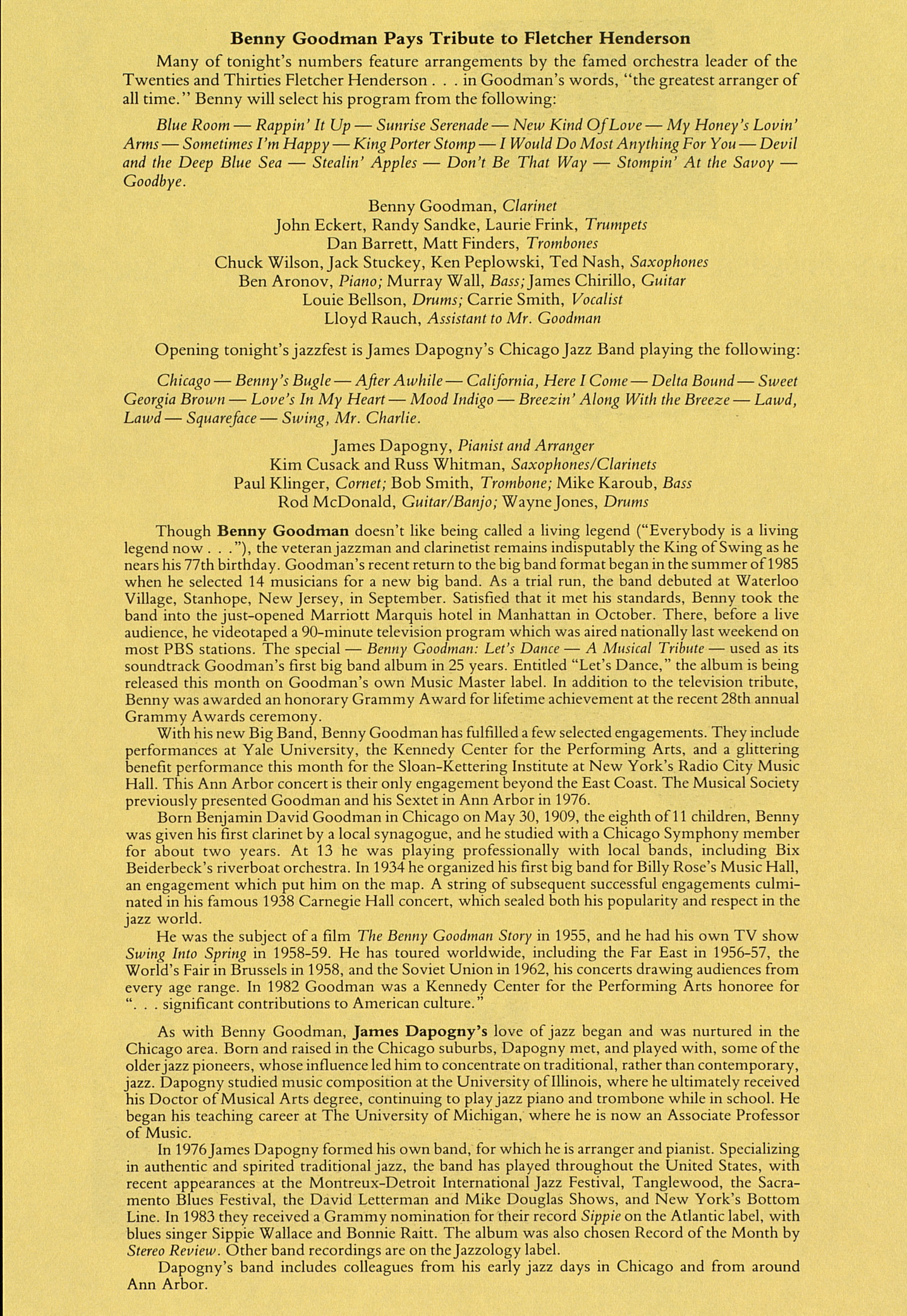 THE UNIVERSITY MUSICAL SOCIETY OF THE UNIVERSITY OF MICHIGAN
A Special Benefit Performance
Saturday Evening, March 22, 1986, at 8:00 Hill Auditorium, Ann Arbor, Michigan
Opening Act:
JAMLSDAPOGNYS
GHIGAGO JAZZ BAND
Sixty-seventh Concert of the 107th Season -Benefit Concert
Benny Goodman Pays Tribute to Fletcher Henderson
Many of tonight's numbers feature arrangements by the famed orchestra leader of the Twenties and Thirties Fletcher Henderson ... in Goodman's words, "the greatest arranger of all time." Benny will select his program from the following:
Blue Room -Rappin' It Up -Sunrise Serenade -New Kind Of Love -My Honey's Lovin' Anns -Sometimes I'm Happy -King Porter Stomp -Would Do Most Anything For You -Devil and the Deep Blue Sea -Stealin' Apples -Don't Be That Way -Stompin' At the Savoy -Goodbye.
Benny Goodman, Clarinet John Eckert, Randy Sandke, Laurie Frink, Trumpets
Dan Barrett, Matt Finders, Trombones
Chuck Wilson, Jack Stuckcy, Ken Peplowski, Ted Nash, Saxophones
Ben Aronov, Piano; Murray Wall, Bass;]zmes Chirillo, Guitar
Louie Bellson, Drums; Carrie Smith, Vocalist
Lloyd Rauch, Assistant to Mr. Goodman
Opening tonight's jazzfest is James Dapogny's Chicago Jazz Band playing the following:
Chicago -Benny's Bugle -After A while -California, Here I Come -Delta Bound -Sweet Georgia Brown -Love's In My Heart -Mood Indigo -Brcezin' Along With the Breeze-Lawd, Lawd--Squareface--Swing, Mr. Charlie.
James Dapogny, Pianist and Arranger
Kim Cusack and Russ Whitman, SaxophonesClarinets
Paul Klinger, Cornet; Bob Smith, Trombone; Mike Karoub, Bass
Rod McDonald, GuitarBanjo; Wayne Jones, Drums
Though Benny Goodman doesn't like being called a living legend ("Everybody is a living legend now . . ."), the veteran jazzman and clarinetist remains indisputably the King of Swing as he nears his 77th birthday. Goodman's recent return to the big band format began in the summer of 1985 when he selected 14 musicians for a new big band. As a trial run, the band debuted at Waterloo Village, Stanhope, New Jersey, in September. Satisfied that it met his standards, Benny took the band into the just-opened Marriott Marquis hotel in Manhattan in October. There, before a live audience, he videotaped a 90-minute television program which was aired nationally last weekend on most PBS stations. The special -Benny Goodman: Let's Dance -A Musical Tribute -used as its soundtrack Goodman's first big band album in 25 years. Entitled "Let's Dance," the album is being released this month on Goodman's own Music Master label. In addition to the television tribute, Benny was awarded an honorary Grammy Award for lifetime achievement at the recent 28th annual Grammy Awards ceremony.
With his new Big Band, Benny Goodman has fulfilled a few selected engagements. They include performances at Yale University, the Kennedy Center for the Performing Arts, and a glittering benefit performance this month for the Sloan-Kettering Institute at New York's Radio City Music Hall. This Ann Arbor concert is their only engagement beyond the East Coast. The Musical Society previously presented Goodman and his Sextet in Ann Arbor in 1976.
Born Benjamin David Goodman in Chicago on May 30, 1909, the eighth of 11 children, Benny was given his first clarinet by a local synagogue, and he studied with a Chicago Symphony member for about two years. At 13 he was playing professionally with local bands, including Bix Beiderbcck's riverboat orchestra. In 1934 he organized his first big band for Billy Rose's Music Hall, an engagement which put him on the map. A string of subsequent successful engagements culmi?nated in his famous 1938 Carnegie Hall concert, which sealed both his popularity and respect in the jazz world.
He was the subject of a film The Benny Goodman Story in 1955, and he had his own TV show Swing Into Spring in 1958-59. He has toured worldwide, including the Far East in 1956-57, the World's Fair in Brussels in 1958, and the Soviet Union in 1962, his concerts drawing audiences from every age range. In 1982 Goodman was a Kennedy Center for the Performing Arts honoree for ". . . significant contributions to American culture."
As with Benny Goodman, James Dapogny's love of jazz began and was nurtured in the Chicago area. Born and raised in the Chicago suburbs, Dapogny met, and played with, some of the older jazz pioneers, whose influence led him to concentrate on traditional, rather than contemporary, jazz. Dapogny studied music composition at the University of Illinois, where he ultimately received his Doctor of Musical Arts degree, continuing to play jazz piano and trombone while in school. He began his teaching career at The University of Michigan, where he is now an Associate Professor of Music.
In 1976James Dapogny formed his own band, for which he is arranger and pianist. Specializing in authentic and spirited traditional jazz, the band has played throughout the United States, with recent appearances at the Montreux-Detroit International Jazz Festival, Tanglewood, the Sacra?mento Blues Festival, the David Letterman and Mike Douglas Shows, and New York's Bottom Line. In 1983 they received a Grammy nomination for their record Sippie on the Atlantic label, with blues singer Sippie Wallace and Bonnie Raitt. The album was also chosen Record of the Month by Stereo Review. Other band recordings are on the Jazzology label.
Dapogny's band includes colleagues from his early jazz days in Chicago and from around Ann Arbor.