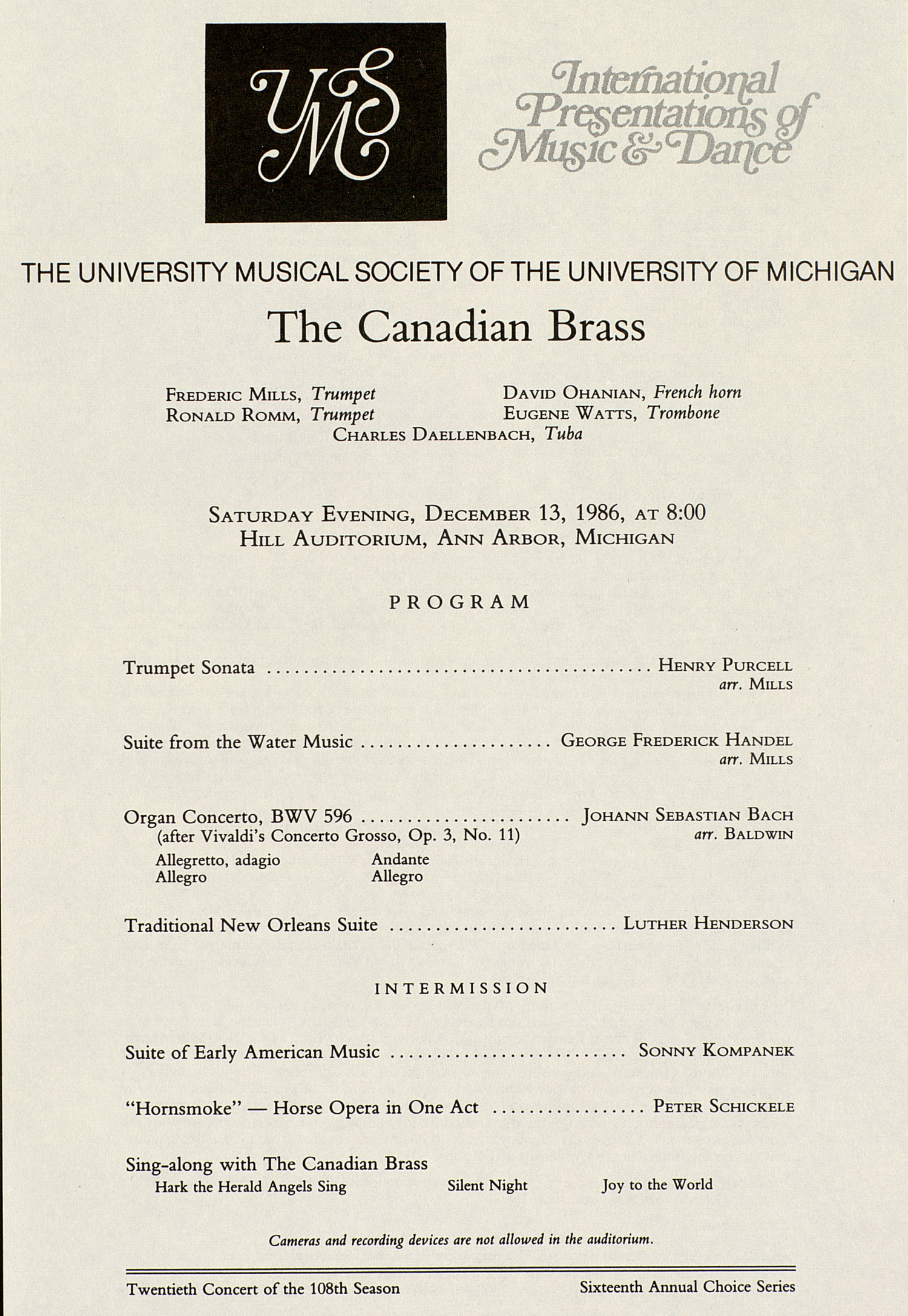 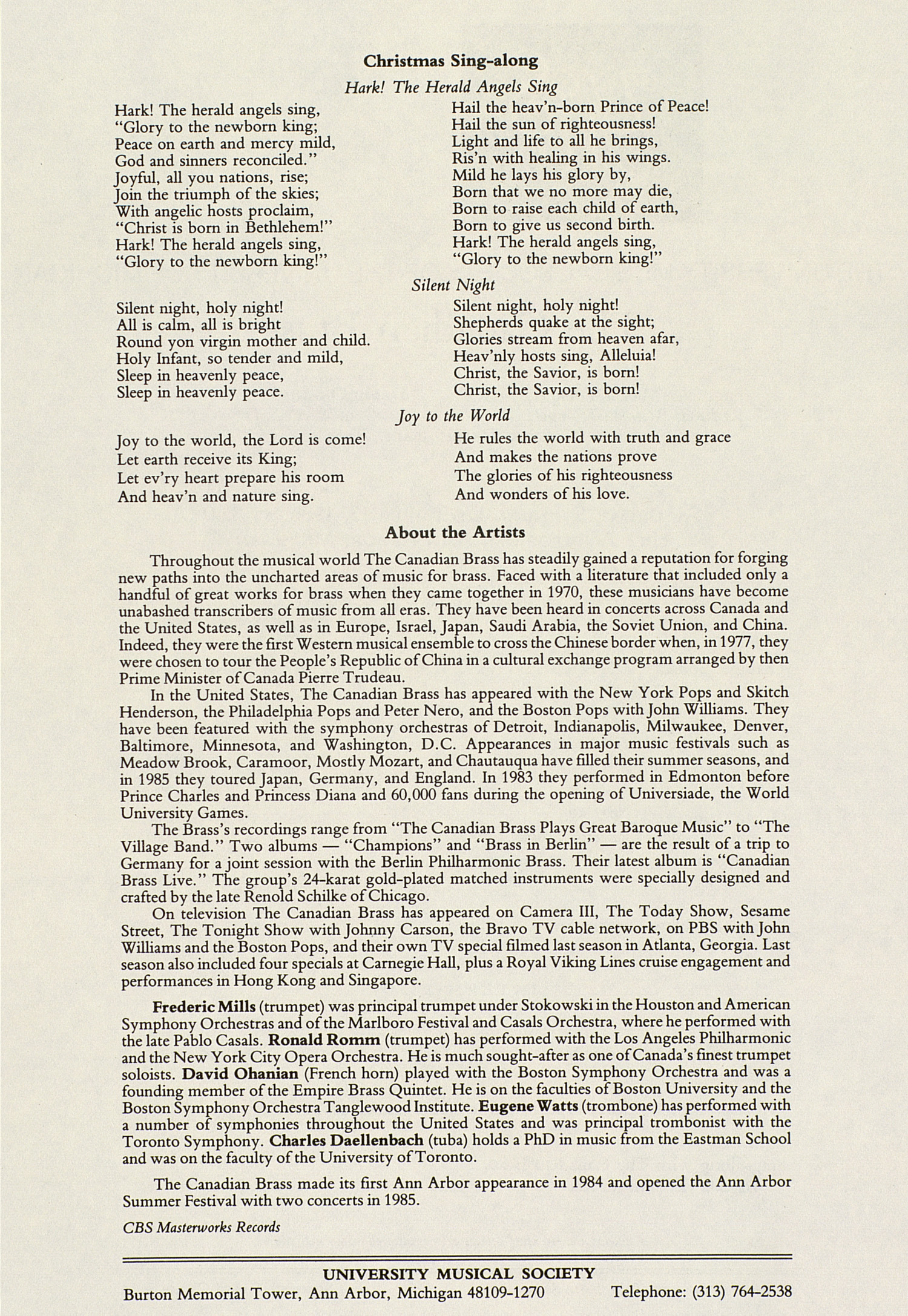 iteitiatipnal
THE UNIVERSITY MUSICAL SOCIETY OF THE UNIVERSITY OF MICHIGAN
The Canadian Brass
Frederic Mills, Trumpet David Ohanian, French horn
Ronald Romm, Trumpet Eugene Watts, Trombone
Charles Daellenbach, Tuba
Saturday Evening, December 13, 1986, at 8:00 Hill Auditorium, Ann Arbor, Michigan
PROGRAM
Trumpet Sonata ..........................................Henry Purcell
an. Mills
Suite from the Water Music.....................George Frederick Handel
an. Mills
Organ Concerto, BWV 596....................... Johann Sebastian Bach
(after Vivaldi's Concerto Grosso, Op. 3, No. 11) an. Baldwin
Allegretto, adagio Andante
Allegro Allegro
Traditional New Orleans Suite .........................Luther Henderson
INTERMISSION
Suite of Early American Music .......................... Sonny Kompanek
"Hornsmoke" -Horse Opera in One Act .................Peter Schickele
Sing-along with The Canadian Brass
Hark the Herald Angels Sing Silent Night Joy to the World
Cameras and recording devices are not allowed in the auditorium. Twentieth Concert of the 108th Season Sixteenth Annual Choice Series
Christmas Sing-along
Hark! The Herald Angels Sing
Hark! The herald angels sing, "Glory to the newborn king; Peace on earth and mercy mild, God and sinners reconciled." Joyful, all you nations, rise; Join the triumph of the skies; With angelic hosts proclaim, "Christ is born in Bethlehem!" Hark! The herald angels sing, "Glory to the newborn king!"
Silent night, holy night!
All is calm, all is bright
Round yon virgin mother and child.
Holy Infant, so tender and mild,
Sleep in heavenly peace,
Sleep in heavenly peace.
Joy to the world, the Lord is come! Let earth receive its King; Let ev'ry heart prepare his room And heav'n and nature sing.
Hail the heav'n-born Prince of Peace! Hail the sun of righteousness! Light and life to all he brings, Ris'n with healing in his wings. Mild he lays his glory by, Born that we no more may die, Born to raise each child of earth, Born to give us second birth. Hark! The herald angels sing, "Glory to the newborn king!"
Silent Night
Silent night, holy night! Shepherds quake at the sight; Glories stream from heaven afar, Heav'nly hosts sing, Alleluia! Christ, the Savior, is born! Christ, the Savior, is born!
Joy to the World
He rules the world with truth and grace And makes the nations prove The glories of his righteousness And wonders of his love.
About the Artists
Throughout the musical world The Canadian Brass has steadily gained a reputation for forging new paths into the uncharted areas of music for brass. Faced with a literature that included only a handful of great works for brass when they came together in 1970, these musicians have become unabashed transcribers of music from all eras. They have been heard in concerts across Canada and the United States, as well as in Europe, Israel, Japan, Saudi Arabia, the Soviet Union, and China. Indeed, they were the first Western musical ensemble to cross the Chinese border when, in 1977, they were chosen to tour the People's Republic of China in a cultural exchange program arranged by then Prime Minister of Canada Pierre Trudeau.
In the United States, The Canadian Brass has appeared with the New York Pops and Skitch Henderson, the Philadelphia Pops and Peter Nero, and the Boston Pops with John Williams. They have been featured with the symphony orchestras of Detroit, Indianapolis, Milwaukee, Denver, Baltimore, Minnesota, and Washington, D.C. Appearances in major music festivals such as Meadow Brook, Caramoor, Mostly Mozart, and Chautauqua have filled their summer seasons, and in 1985 they toured Japan, Germany, and England. In 1983 they performed in Edmonton before Prince Charles and Princess Diana and 60,000 fans during the opening of Universiade, the World University Games.
The Brass's recordings range from "The Canadian Brass Plays Great Baroque Music" to "The Village Band." Two albums -"Champions" and "Brass in Berlin" -are the result of a trip to Germany for a joint session with the Berlin Philharmonic Brass. Their latest album is "Canadian Brass Live." The group's 24-karat gold-plated matched instruments were specially designed and crafted by the late Renold Schilke of Chicago.
On television The Canadian Brass has appeared on Camera III, The Today Show, Sesame Street, The Tonight Show with Johnny Carson, the Bravo TV cable network, on PBS with John Williams and the Boston Pops, and their own TV special filmed last season in Atlanta, Georgia. Last season also included four specials at Carnegie Hall, plus a Royal Viking Lines cruise engagement and performances in Hong Kong and Singapore.
Frederic Mills (trumpet) was principal trumpet under Stokowski in the Houston and American Symphony Orchestras and of the Marlboro Festival and Casals Orchestra, where he performed with the late Pablo Casals. Ronald Romm (trumpet) has performed with the Los Angeles Philharmonic and the New York City Opera Orchestra. He is much sought-after as one of Canada's finest trumpet soloists. David Ohanian (French horn) played with the Boston Symphony Orchestra and was a founding member of the Empire Brass Quintet. He is on the faculties of Boston University and the Boston Symphony Orchestra Tanglewood Institute. Eugene Watts (trombone) has performed with a number of symphonies throughout the United States and was principal trombonist with the Toronto Symphony. Charles Daellenbach (tuba) holds a PhD in music from the Eastman School and was on the faculty of the University of Toronto.
The Canadian Brass made its first Ann Arbor appearance in 1984 and opened the Ann Arbor Summer Festival with two concerts in 1985.
CBS Masterworks Records
UNIVERSITY MUSICAL SOCIETY
Burton Memorial Tower, Ann Arbor, Michigan 48109-1270 Telephone: (313) 764-2538