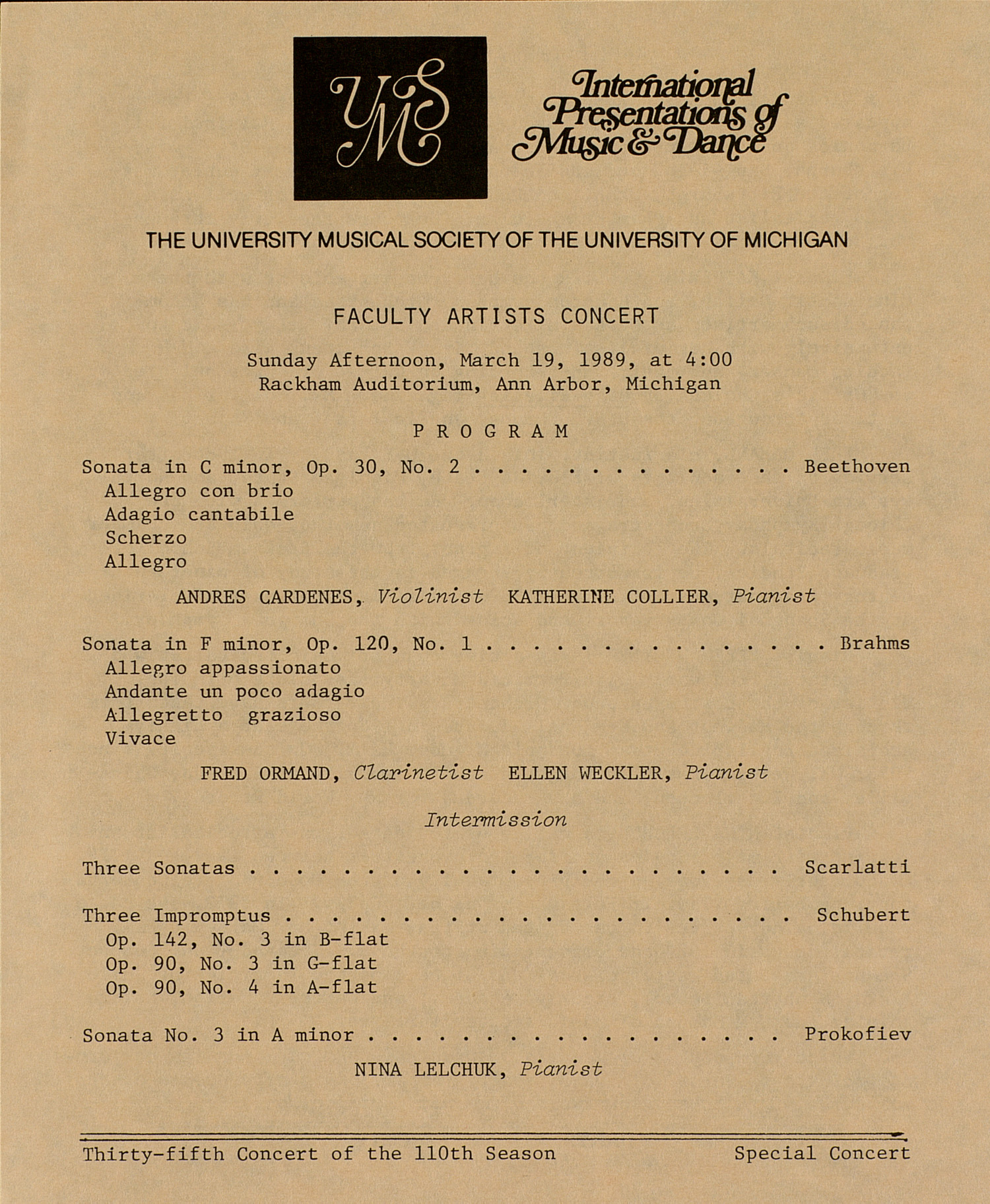 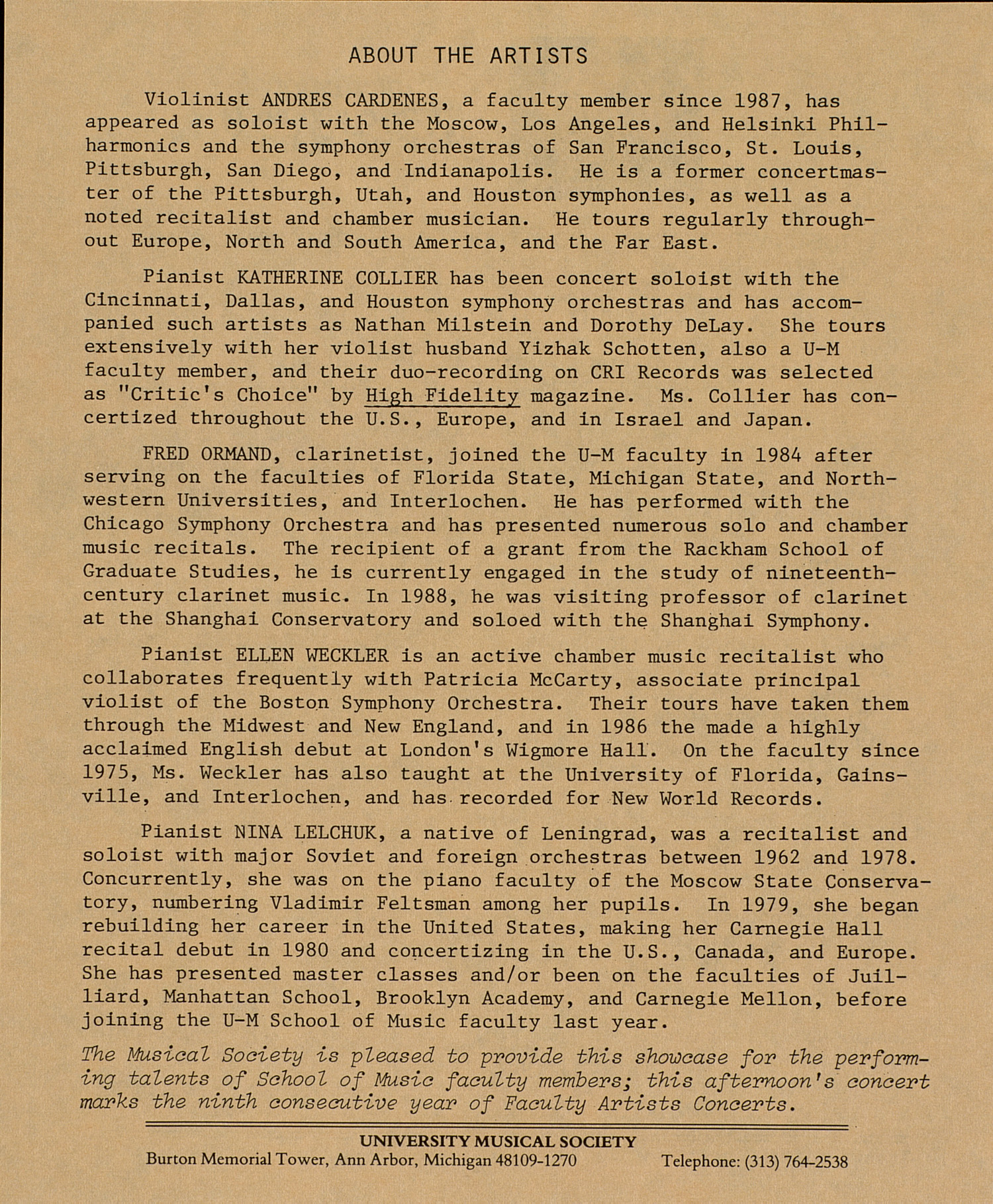 THE UNIVERSITY MUSICAL SOCIETY OF THE UNIVERSITY OF MICHIGAN
FACULTY ARTISTS CONCERT
Sunday Afternoon, March 19, 1989, at 4:00 Rackham Auditorium, Ann Arbor, Michigan
PROGRAM
Sonata in C minor, Op. 30, No. 2..............Beethoven
Allegro con brio Adagio cantabile Scherzo Allegro
ANDRES CARDENES, Violinist KATHERTNE COLLIER, Pianist
Sonata in F minor, Op. 120, No. 1...............Brahms
Allegro appassionato Andante un poco adagio Allegretto grazioso Vivace
FRED ORMAND, Clarinetist ELLEN WECKLER, Pianist
Intermission Three Sonatas ....................... Scarlatti
Three Impromptus ...................... Schubert
Op. 142, No. 3 in B-flat Op. 90, No. 3 in G-flat Op. 90, No. 4 in A-flat
Sonata No. 3 in A minor..................Prokofiev
NINA LELCHUK, Pianist
Thirty-fifth Concert of the 110th Season Special Concert
ABOUT THE ARTISTS
Violinist ANDRES CARDENES, a faculty member since 1987, has appeared as soloist with the Moscow, Los Angeles, and Helsinki Phil?harmonics and the symphony orchestras of San Francisco, St. Louis, Pittsburgh, San Diego, and Indianapolis. He is a former concertmas-ter of the Pittsburgh, Utah, and Houston symphonies, as well as a noted recitalist and chamber musician. He tours regularly through?out Europe, North and South America, and the Far East.
Pianist KATHERINE COLLIER has been concert soloist with the Cincinnati, Dallas, and Houston symphony orchestras and has accom?panied such artists as Nathan Milstein and Dorothy DeLay. She tours extensively with her violist husband Yizhak Schotten, also a U-M faculty member, and their duo-recording on CRI Records was selected as "Critic's Choice" by High Fidelity magazine. Ms. Collier has con-certized throughout the U.S., Europe, and in Israel and Japan.
FRED ORMAND, clarinetist, joined the U-M faculty in 1984 after serving on the faculties of Florida State, Michigan State, and North?western Universities, and Interlochen. He has performed with the Chicago Symphony Orchestra and has presented numerous solo and chamber music recitals. The recipient of a grant from the Rackham School of Graduate Studies, he is currently engaged in the study of nineteenth-century clarinet music. In 1988, he was visiting professor of clarinet at the Shanghai Conservatory and soloed with the Shanghai Symphony.
Pianist ELLEN WECKLER is an active chamber music recitalist who collaborates frequently with Patricia McCarty, associate principal violist of the Boston Symphony Orchestra. Their tours have taken them through the Midwest and New England, and in 1986 the made a highly acclaimed English debut at London's Wigmore Hall. On the faculty since 1975, Ms. Weckler has also taught at the University of Florida, Gains-ville, and Interlochen, and has recorded for New World Records.
Pianist NINA LELCHUK, a native of Leningrad, was a recitalist and soloist with major Soviet and foreign orchestras between 1962 and 1978. Concurrently, she was on the piano faculty of the Moscow State Conserva?tory, numbering Vladimir Feltsman among her pupils. In 1979, she began rebuilding her career in the United States, making her Carnegie Hall recital debut in 1980 and concertizing in the U.S., Canada, and Europe. She has presented master classes andor been on the faculties of Juil-liard, Manhattan School, Brooklyn Academy, and Carnegie Mellon, before joining the U-M School of Music faculty last year.
The Musical Society is pleased to provide this showcase for the perform?ing talents of School of Music faculty members; this afternoon1 s concert marks the ninth consecutive year of Faculty Artists Concerts.
UNIVERSITY MUSICAL SOCIETY
Burton Memorial Tower, Ann Arbor, Michigan 48109-1270 Telephone: (313) 764-2538