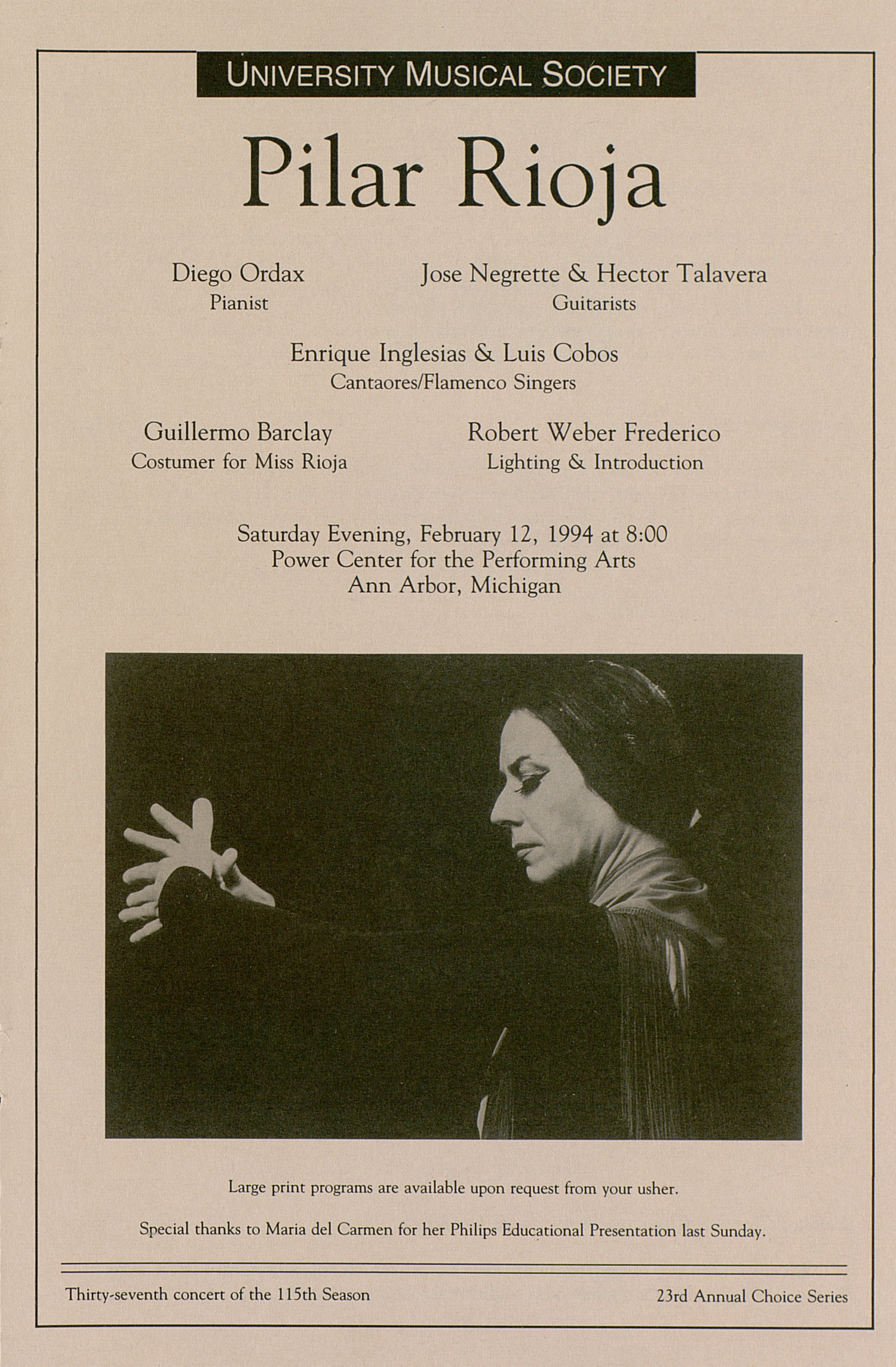 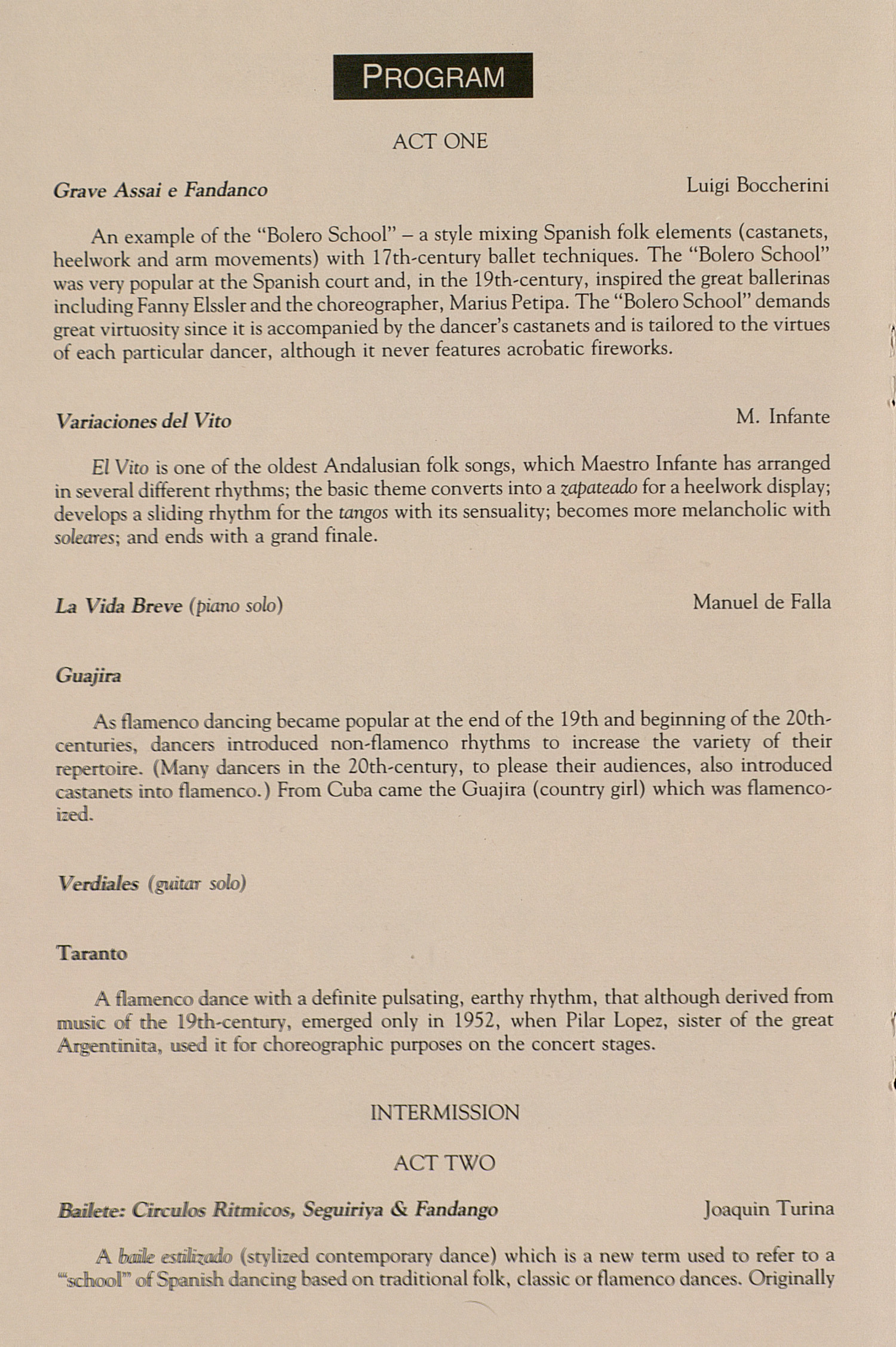 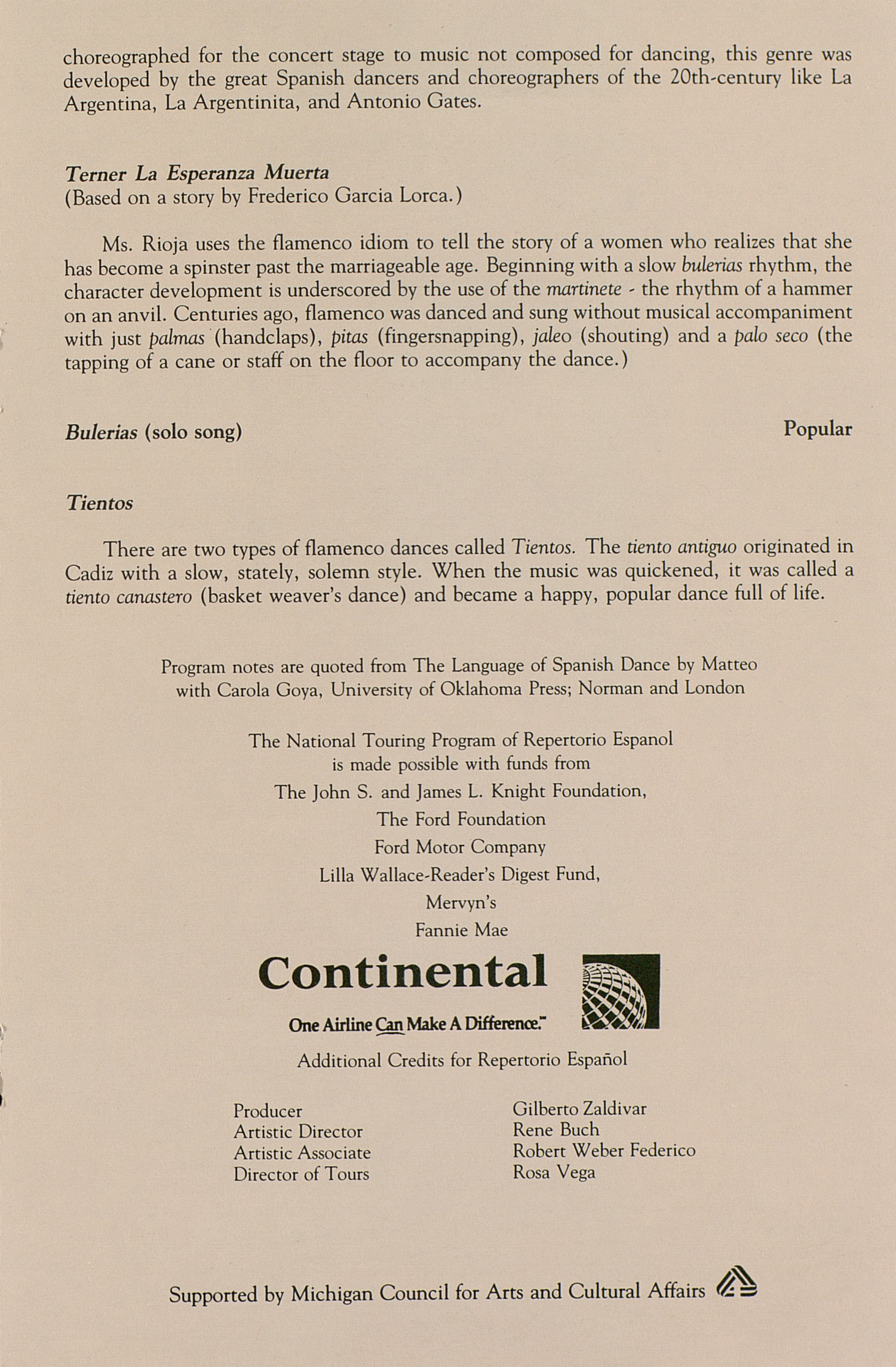 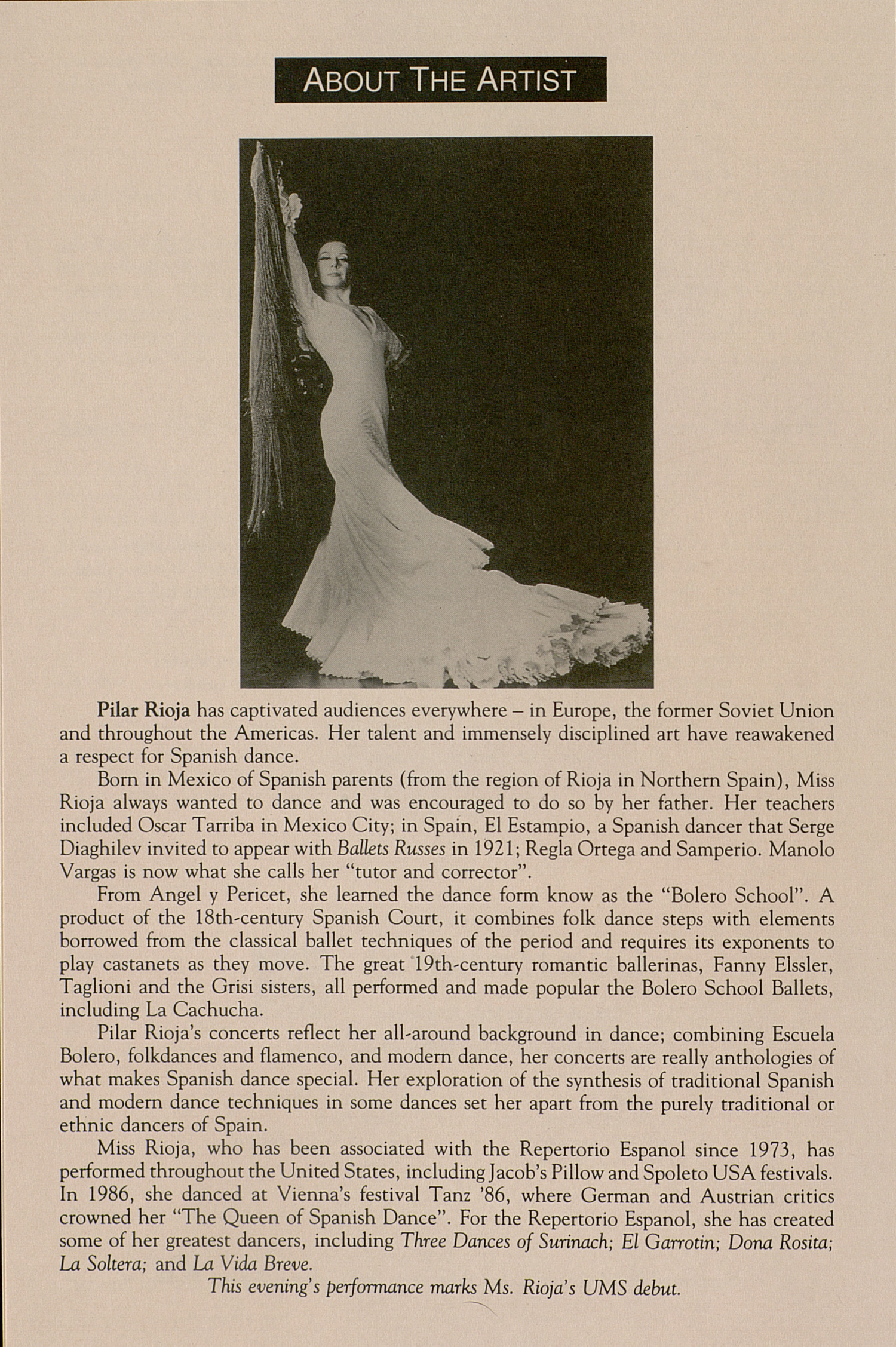 University Musical Society
Pilar Rioja
Diego Ordax
Pianist
Jose Negrette &. Hector Talavera Guitarists
Enrique Inglesias St Luis Cobos CantaoresFlamenco Singers
Guillermo Barclay Costumer for Miss Rioja
Robert Weber Frederico Lighting &. Introduction
Saturday Evening, February 12, 1994 at 8:00
Power Center for the Performing Arts
Ann Arbor, Michigan
Large print programs are available upon request from your usher. Special thanks to Maria del Carmen for her Philips Educational Presentation last Sunday.
Thirty-seventh concert of the 115th Season 23rd Annual Choice Series
Program
ACT ONE Grave Assai e Fandanco Luigi Boccherini
An example of the "Bolero School" a style mixing Spanish folk elements (castanets, heelwork and arm movements) with 17th-century ballet techniques. The "Bolero School" was very popular at the Spanish court and, in the 19th-century, inspired the great ballerinas including Fanny Elssler and the choreographer, Marius Petipa. The "Bolero School" demands great virtuosity since it is accompanied by the dancer's castanets and is tailored to the virtues of each particular dancer, although it never features acrobatic fireworks.
Variaciones del Vito M. Infante
El Vito is one of the oldest Andalusian folk songs, which Maestro Infante has arranged in several different rhythms; the basic theme converts into a zapateodo for a heelwork display; develops a sliding rhythm for the tangos with its sensuality; becomes more melancholic with soleares; and ends with a grand finale.
La Vida Breve (piano solo) Manuel de Falla
Guajira
As flamenco dancing became popular at the end of the 19th and beginning of the 20th-centuries, dancers introduced non-flamenco rhythms to increase the variety of their repertoire. (Many dancers in the 20th-century, to please their audiences, also introduced castanets into flamenco.) From Cuba came the Guajira (country girl) which was flamenco-bed.
Vetdiales (guitar solo)
Taranto
A flamenco dance with a definite pulsating, earthy rhythm, that although derived from music of the 19th-century, emerged only in 1952, when Pilar Lopez, sister of the great Aigentinita, used it for choreographic purposes on the concert stages.
INTERMISSION
ACT TWO Railete: Cbrculos Ritmicos, Seguiriya & Fandango joaquin Turin.)
A hade atihzodo (stylted contemporary dance) which is a new term used to refer to a ""school" of Spanish dancing based on traditional folk, classic or flamenco dances. Originally
choreographed for the concert stage to music not composed for dancing, this genre was developed by the great Spanish dancers and choreographers of the 20th-century like La Argentina, La Argentinita, and Antonio Gates.
Terner La Esperanza Muerta
(Based on a story by Frederico Garcia Lorca.)
Ms. Rioja uses the flamenco idiom to tell the story of a women who realizes that she has become a spinster past the marriageable age. Beginning with a slow bulerias rhythm, the character development is underscored by the use of the martinete the rhythm of a hammer on an anvil. Centuries ago, flamenco was danced and sung without musical accompaniment with just palmas (handclaps), pitas (fingersnapping), jaleo (shouting) and a palo seco (the tapping of a cane or staff on the floor to accompany the dance.)
Bulerias (solo song) Popular
Tientos
There are two types of flamenco dances called Tientos. The tiento antiguo originated in Cadiz with a slow, stately, solemn style. When the music was quickened, it was called a tiento canastero (basket weaver's dance) and became a happy, popular dance full of life.
Program notes are quoted from The Language of Spanish Dance by Matteo with Carola Goya, University of Oklahoma Press; Norman and London
The National Touring Program of Repertorio Espanol
is made possible with funds from
The John S. and James L. Knight Foundation,
The Ford Foundation
Ford Motor Company
Lilla Wallace-Reader's Digest Fund,
Mervyn's Fannie Mae
Continental
One Airline Can Make A Difference." Additional Credits for Repertorio Espanol
Producer Gilberto Zaldivar
Artistic Director Rene Buch
Artistic Associate Robert Weber Federico
Director of Tours Rosa Vega
Supported by Michigan Council for Arts and Cultural Affairs
A
About The Artist
Pilar Rioja has captivated audiences everywhere in Europe, the former Soviet Union and throughout the Americas. Her talent and immensely disciplined art have reawakened a respect for Spanish dance.
Born in Mexico of Spanish parents (from the region of Rioja in Northern Spain), Miss Rioja always wanted to dance and was encouraged to do so by her father. Her teachers included Oscar Tarriba in Mexico City; in Spain, El Estampio, a Spanish dancer that Serge Diaghilev invited to appear with Ballets Russes in 1921; Regla Ortega and Samperio. Manolo Vargas is now what she calls her "tutor and corrector".
From Angel y Pericet, she learned the dance form know as the "Bolero School". A product of the 18th-century Spanish Court, it combines folk dance steps with elements borrowed from the classical ballet techniques of the period and requires its exponents to play castanets as they move. The great 19th-century romantic ballerinas, Fanny Elssler, Taglioni and the Grisi sisters, all performed and made popular the Bolero School Ballets, including La Cachucha.
Pilar Rioja's concerts reflect her all-around background in dance; combining Escuela Bolero, folkdances and flamenco, and modern dance, her concerts are really anthologies of what makes Spanish dance special. Her exploration of the synthesis of traditional Spanish and modern dance techniques in some dances set her apart from the purely traditional or ethnic dancers of Spain.
Miss Rioja, who has been associated with the Repertorio Espanol since 1973, has performed throughout the United States, including Jacob's Pillow and Spoleto USA festivals. In 1986, she danced at Vienna's festival Tanz '86, where German and Austrian critics crowned her "The Queen of Spanish Dance". For the Repertorio Espanol, she has created some of her greatest dancers, including Three Dances of Surinach; El Garrotin; Dona Rosita; La Soltera; and La Vida Breve.
This evening's performance marks Ms. Rioja's UMS debut.