UMS Concert Program, October 30, 2004: Forbidden Christmas Or The Doctor And The Patient -- 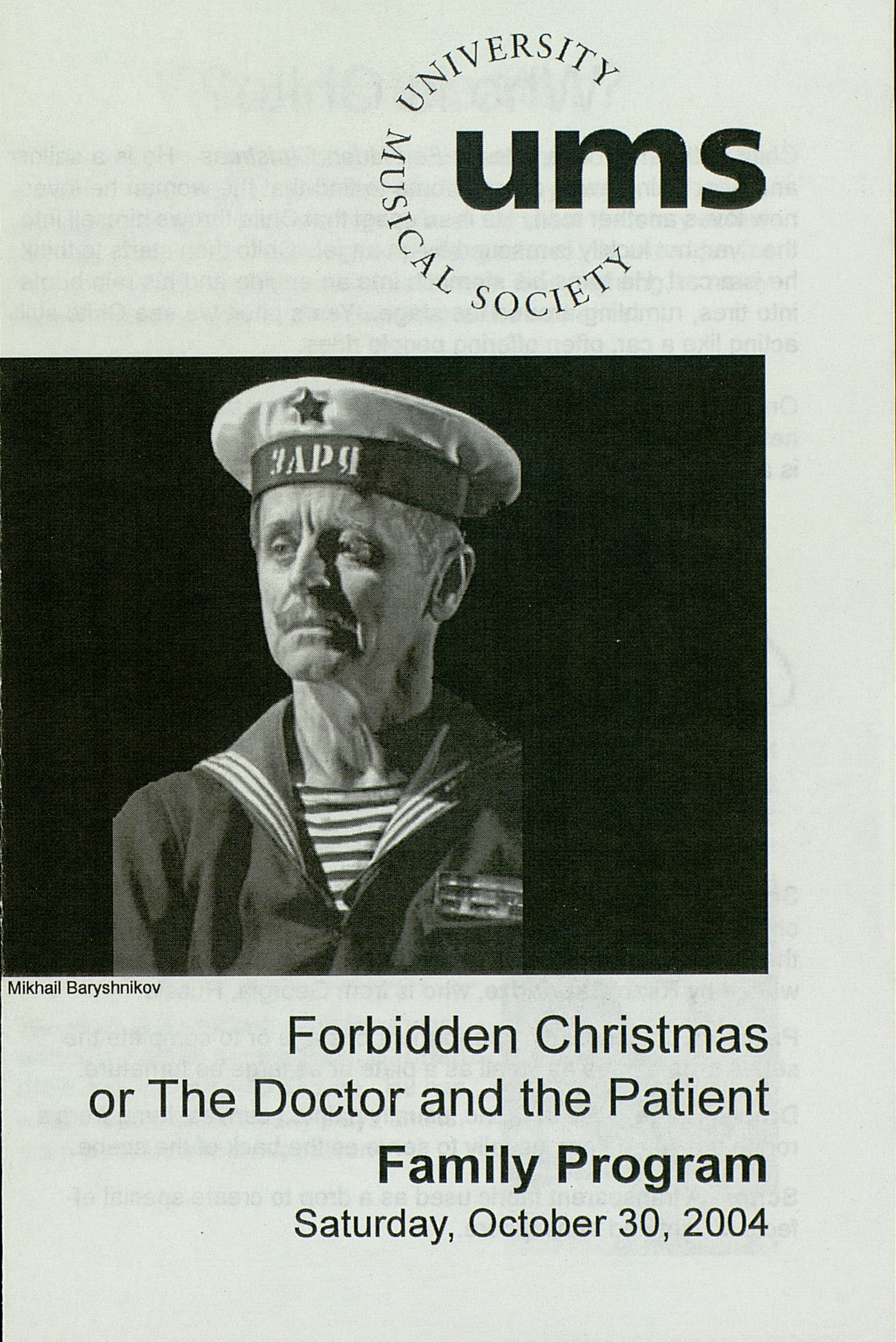 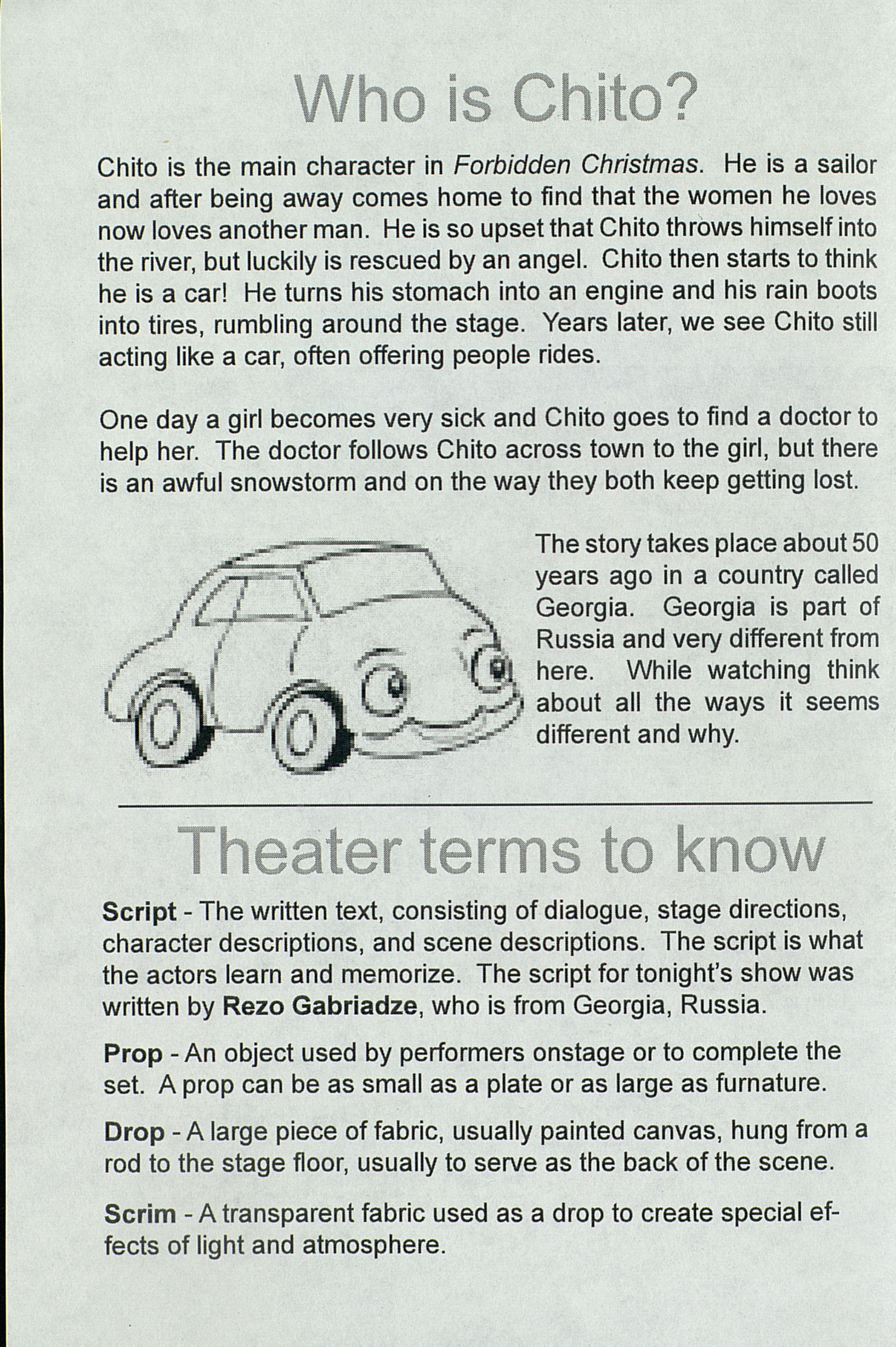 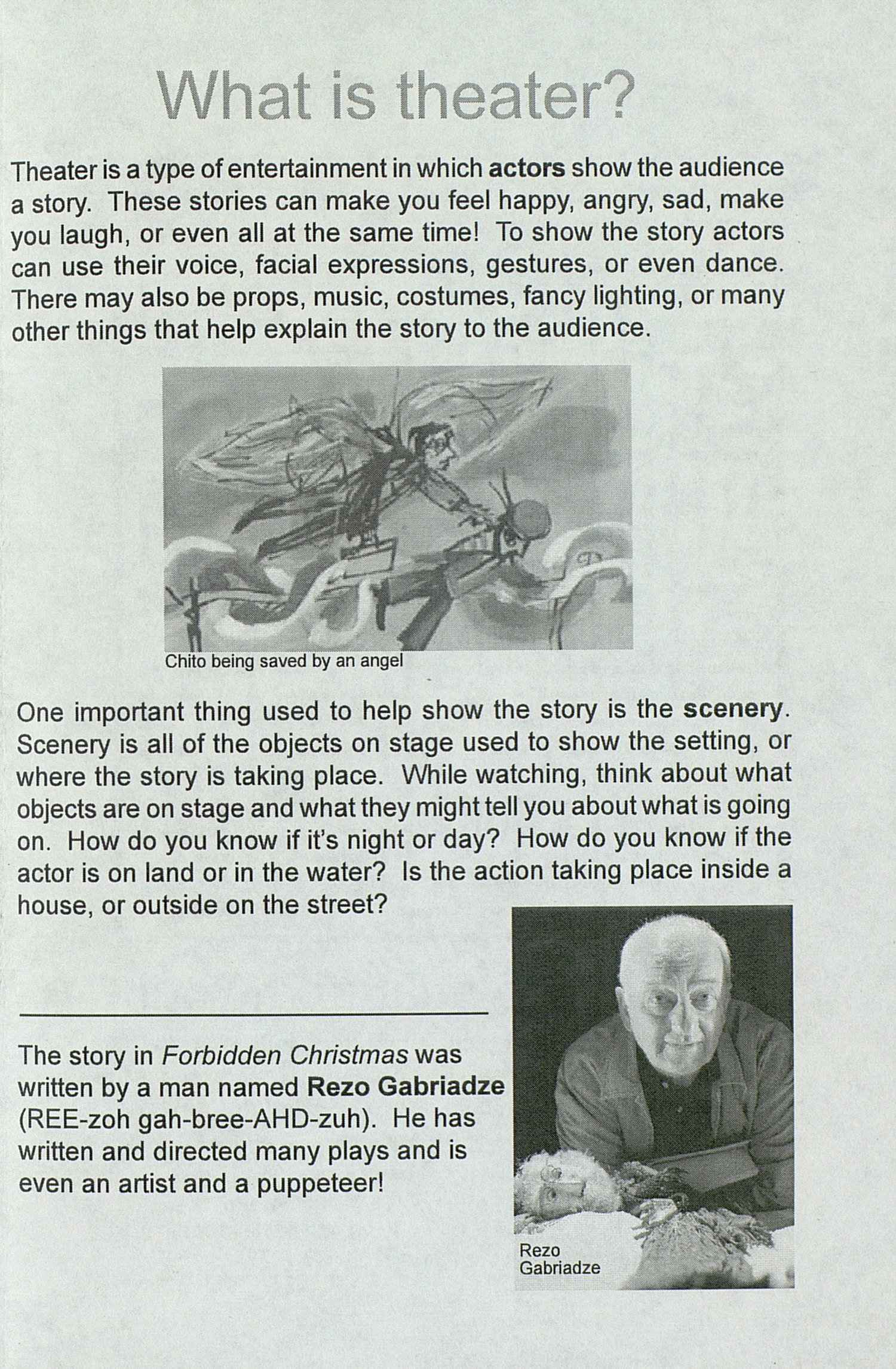 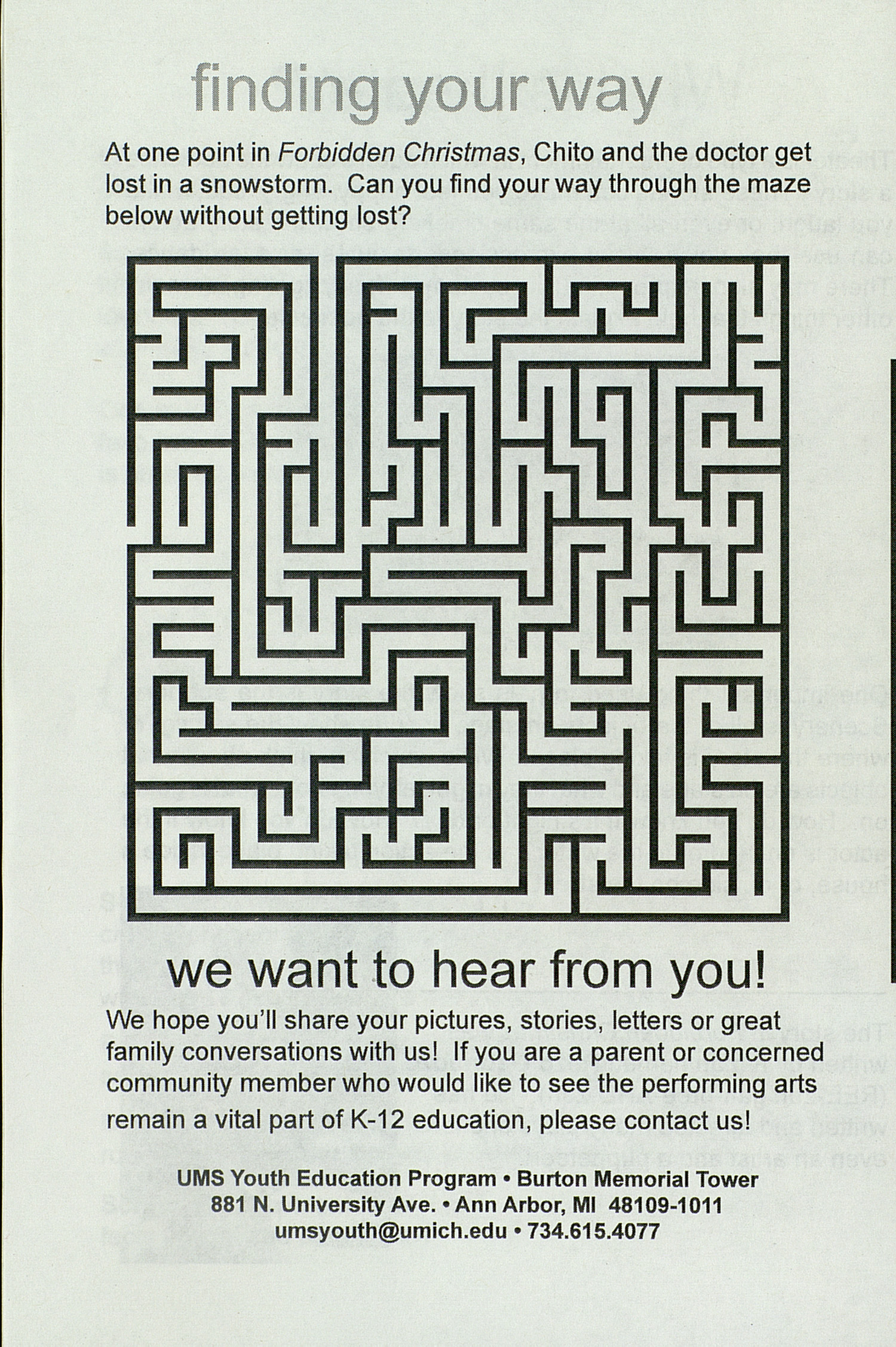 ums
Forbidden Christmas or The Doctor and the Patient
Family Program
Saturday, October 30, 2004
Mikhail Baryshnikov
Who is Chito
Chito is the main character in Forbidden Christmas. He is a sailor and after being away comes home to find that the women he loves now loves another man. He is so upset that Chito throws himself into the river, but luckily is rescued by an angel. Chito then starts to think he is a car! He tums his stomach into an engine and his rain boots into tires, rumbling around the stage. Years later, we see Chito still acting like a car, often offering people rides.
One day a girl becomes very sick and Chito goes to find a doctor to help her. The doctor follows Chito across town to the girl, but there is an awful snowstorm and on the way they both keep getting lost.
The story takes place about 50 years ago in a country called Georgia. Georgia is part of Russia and very different from here. While watching think about all the ways it seems different and why.
Theater terms to know
Script The written text, consisting of dialogue, stage directions, character descriptions, and scene descriptions. The script is what the actors learn and memorize. The script for tonight's show was written by Rezo Gabriadze, who is from Georgia, Russia.
Prop An object used by performers onstage or to complete the set. A prop can be as small as a plate or as large as furnature.
Drop A large piece of fabric, usually painted canvas, hung from a rod to the stage floor, usually to serve as the back of the scene.
Scrim A transparent fabric used as a drop to create special ef?fects of light and atmosphere.
What is theater
Theater is a type of entertainment in which actors show the audience a story. These stories can make you feel happy, angry, sad, make you laugh, or even all at the same time! To show the story actors can use their voice, facial expressions, gestures, or even dance. There may also be props, music, costumes, fancy lighting, or many other things that help explain the story to the audience.
Chito being saved by an angel
One important thing used to help show the story is the scenery. Scenery is all of the objects on stage used to show the setting, or where the story is taking place. While watching, think about what objects are on stage and what they might tell you about what is going on. How do you know if it's night or day How do you know if the actor is on land or in the water Is the action taking place inside a
house, or outside on the street
The story in Forbidden Christmas was written by a man named Rezo Gabriadze (REEzoh gahbreeAHDzuh). He has written and directed many plays and is even an artist and a puppeteer!
finding your way
At one point in Forbidden Christmas, Chito and the doctor get lost in a snowstorm. Can you find your way through the maze below without getting lost
we want to hear from you!
We hope you'll share your pictures, stories, letters or great family conversations with us! If you are a parent or concerned community member who would like to see the performing arts remain a vital part of K12 education, please contact us!
UMS Youth Education Program Burton Memorial Tower
881 N. University Ave. Ann Arbor, Ml 481091011
umsyouth@umich.edu 734.615.4077