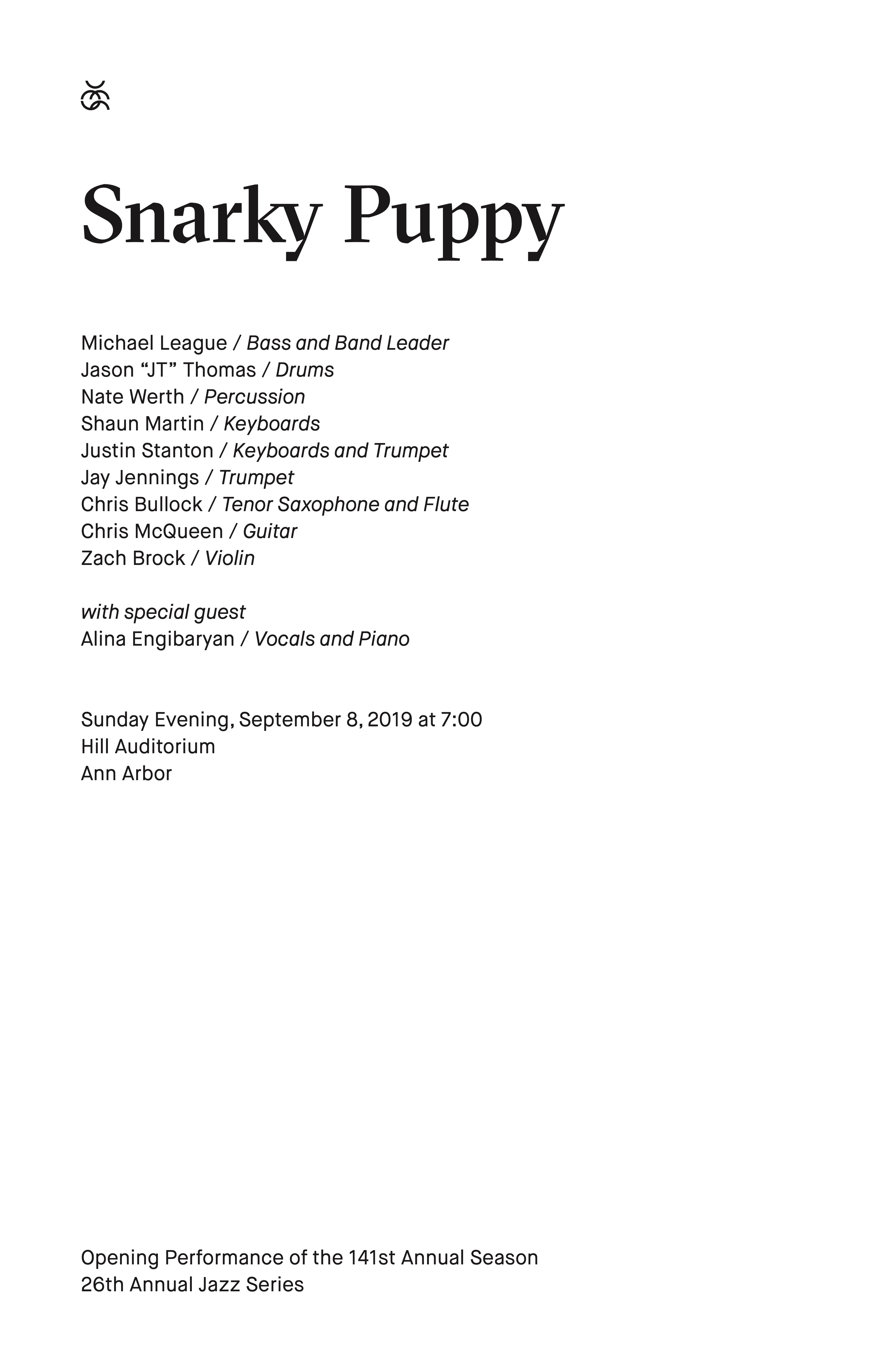 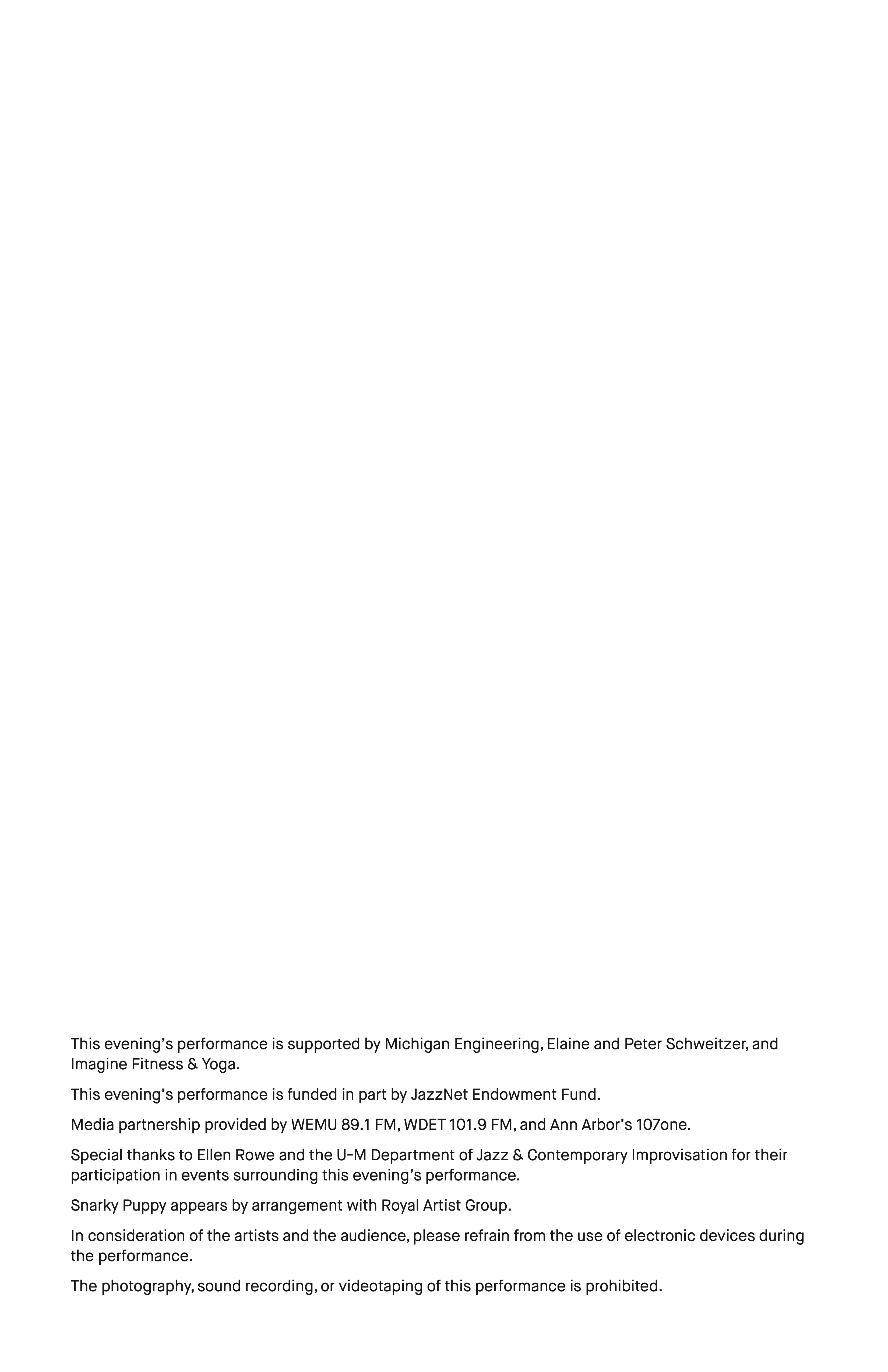 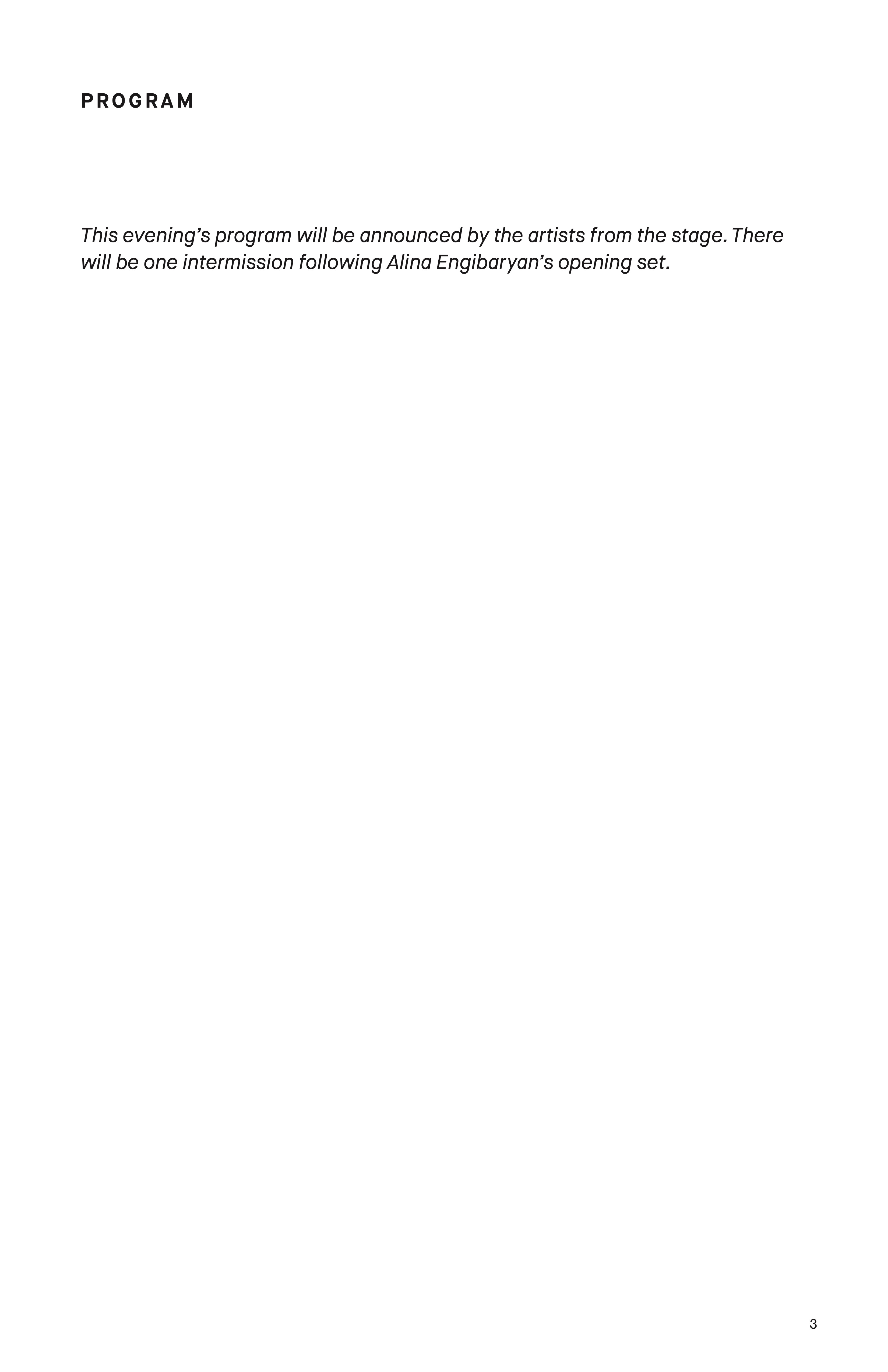 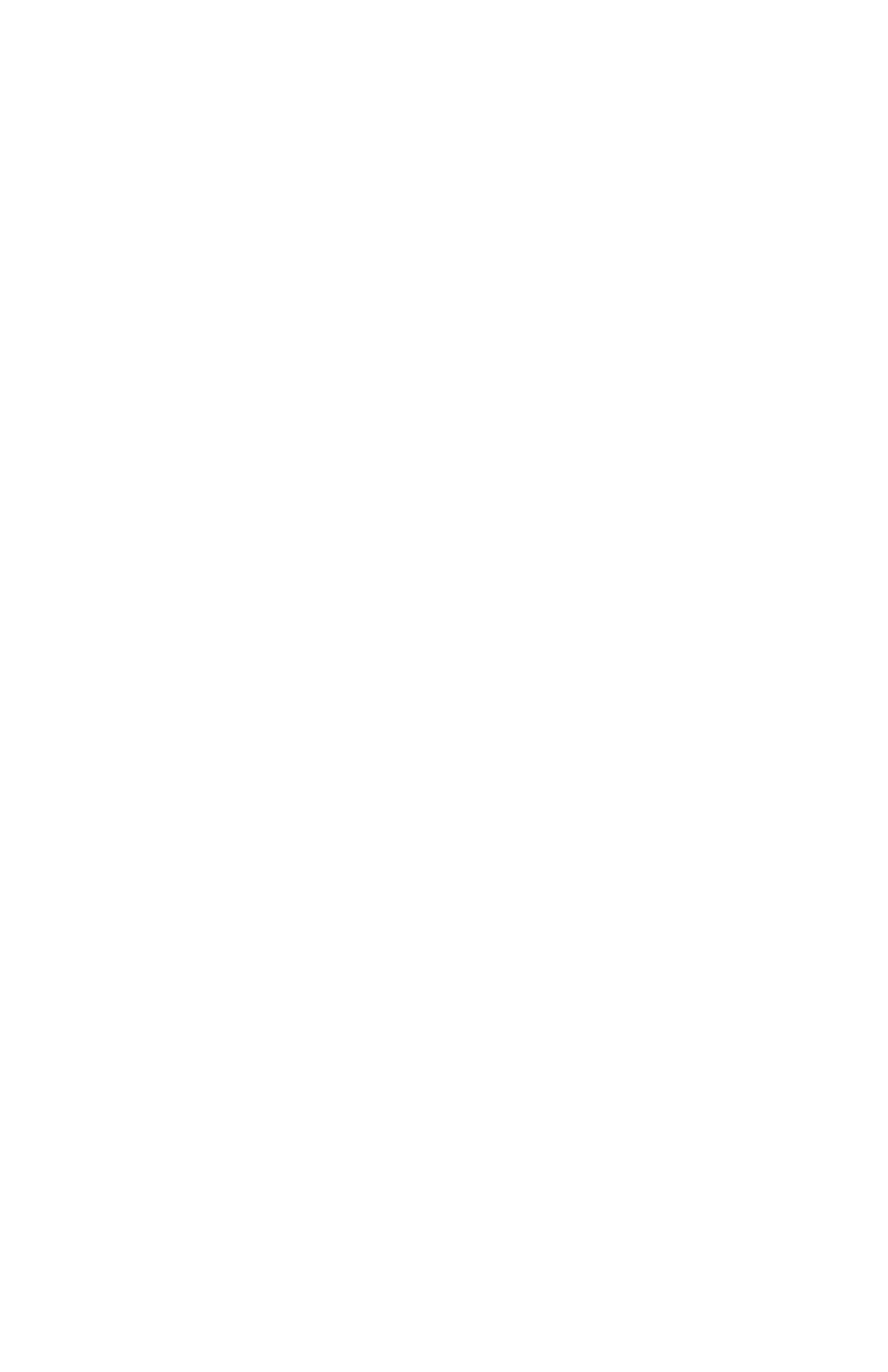 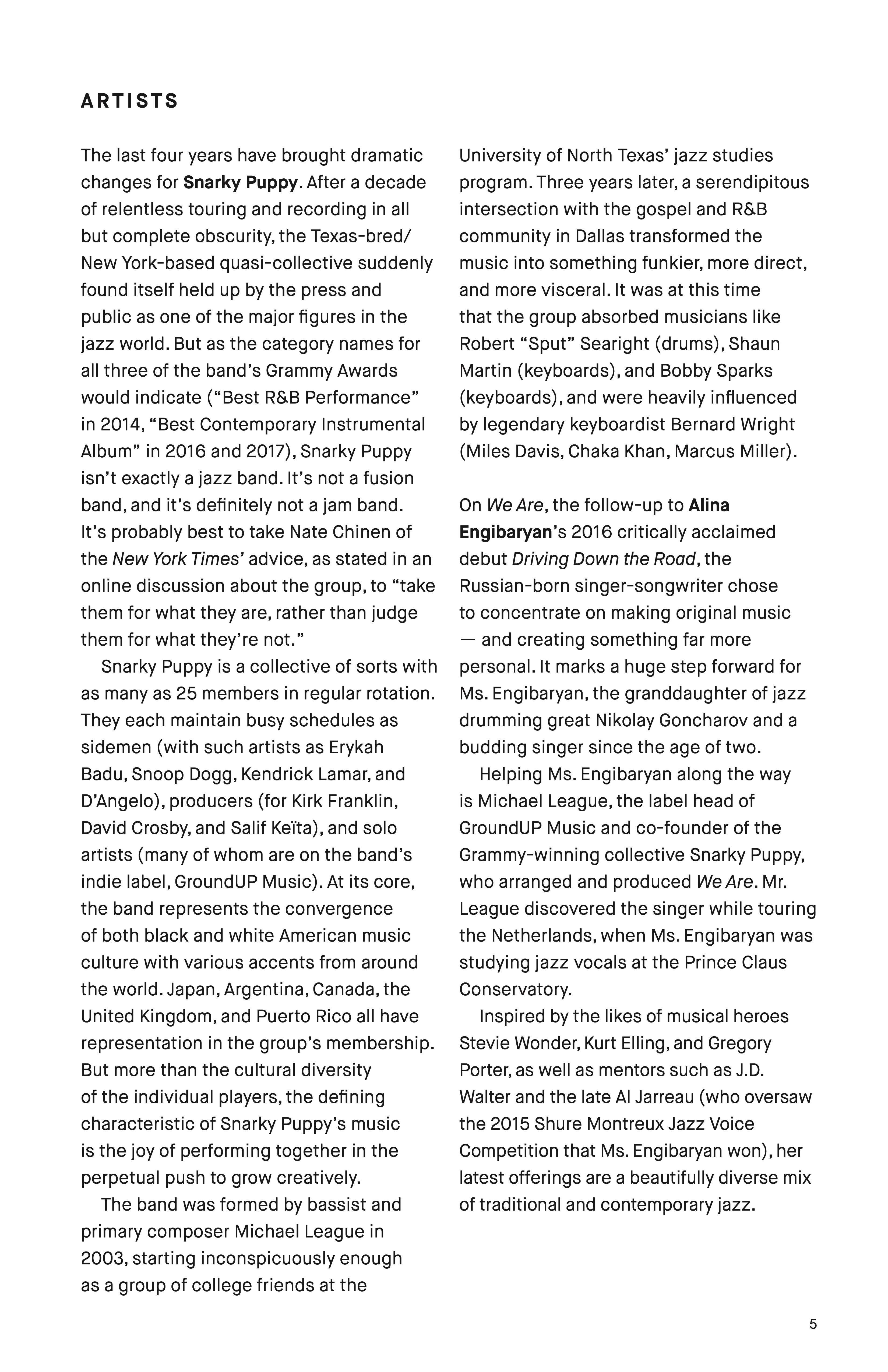 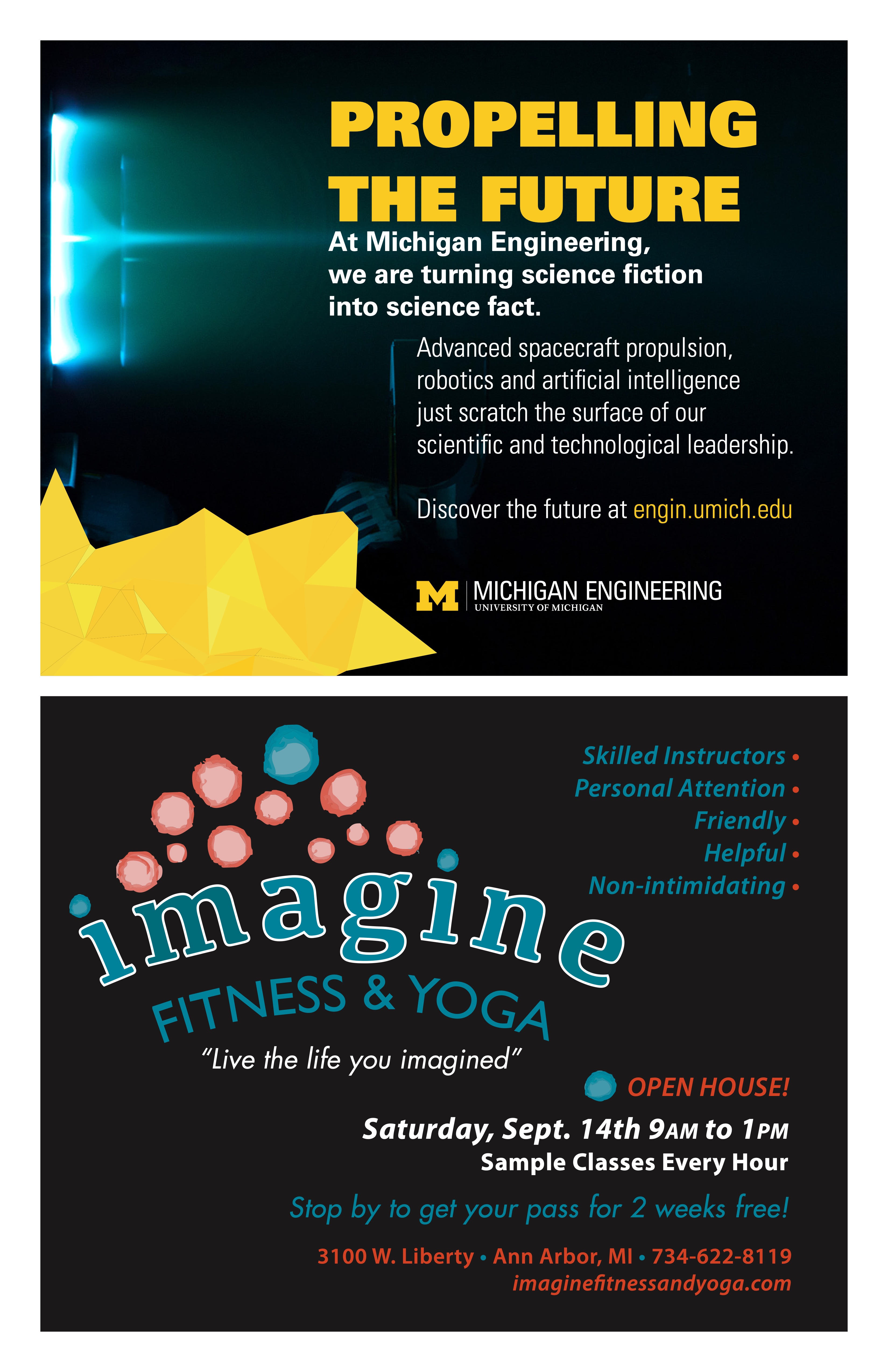 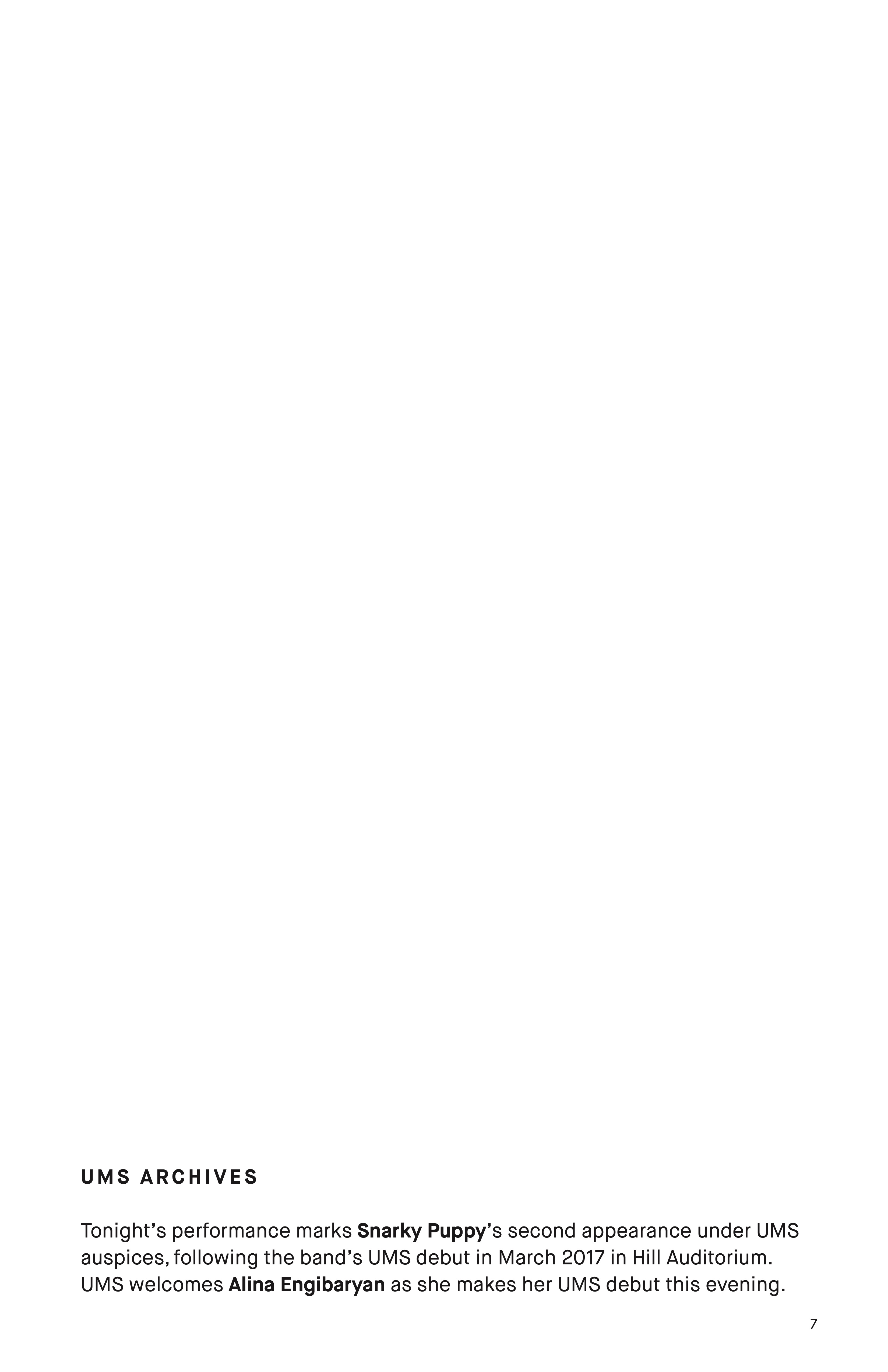 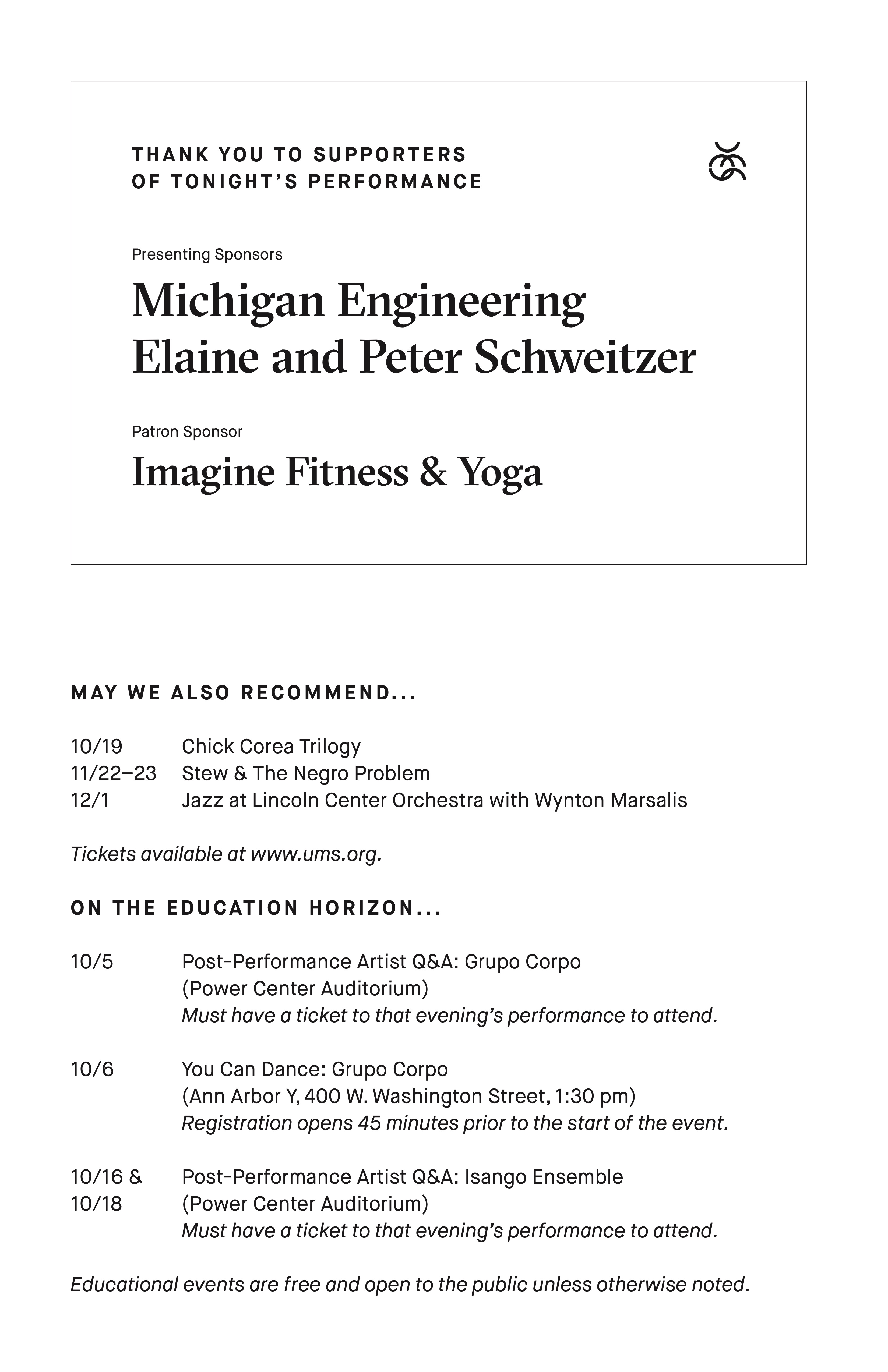 This evening’s performance is supported by Michigan Engineering, Elaine and Peter Schweitzer, and Imagine Fitness & Yoga.

This evening’s performance is funded in part by JazzNet Endowment Fund.
Media partnership provided by WEMU 89.1 FM, WDET 101.9 FM, and Ann Arbor’s 107one.

Special thanks to Ellen Rowe and the U-M Department of Jazz & Contemporary Improvisation for their participation in events surrounding this evening’s performance.

This evening’s program will be announced by the artists from the stage. There will be one intermission following Alina Engibaryan’s opening set.

The last four years have brought dramatic changes for Snarky Puppy. After a decade of relentless touring and recording in all but complete obscurity, the Texas-bred/ New York-based quasi-collective suddenly found itself held up by the press and public as one of the major figures in the jazz world. But as the category names for all three of the band’s Grammy Awards would indicate (“Best R&B Performance” in 2014, “Best Contemporary Instrumental Album” in 2016 and 2017), Snarky Puppy isn’t exactly a jazz band. It’s not a fusion band, and it’s definitely not a jam band.
It’s probably best to take Nate Chinen of the New York Times’ advice, as stated in an online discussion about the group, to “take them for what they are, rather than judge them for what they’re not.”

Snarky Puppy is a collective of sorts with as many as 25 members in regular rotation. They each maintain busy schedules as sidemen (with such artists as Erykah
Badu, Snoop Dogg, Kendrick Lamar, and D’Angelo), producers (for Kirk Franklin, David Crosby, and Salif Keïta), and solo artists (many of whom are on the band’s indie label, GroundUP Music). At its core, the band represents the convergence
of both black and white American music culture with various accents from around the world. Japan, Argentina, Canada, the United Kingdom, and Puerto Rico all have representation in the group’s membership. But more than the cultural diversity
of the individual players, the defining characteristic of Snarky Puppy’s music
is the joy of performing together in the perpetual push to grow creatively.

The band was formed by bassist and primary composer Michael League in 2003, starting inconspicuously enough as a group of college friends at the

University of North Texas’ jazz studies program. Three years later, a serendipitous intersection with the gospel and R&B community in Dallas transformed the music into something funkier, more direct, and more visceral. It was at this time

On We Are, the follow-up to Alina Engibaryan’s 2016 critically acclaimed debut Driving Down the Road, the Russian-born singer-songwriter chose
to concentrate on making original music — and creating something far more personal. It marks a huge step forward for Ms. Engibaryan, the granddaughter of jazz drumming great Nikolay Goncharov and a budding singer since the age of two.

Helping Ms. Engibaryan along the way
is Michael League, the label head of GroundUP Music and co-founder of the Grammy-winning collective Snarky Puppy, who arranged and produced We Are. Mr. League discovered the singer while touring the Netherlands, when Ms. Engibaryan was studying jazz vocals at the Prince Claus Conservatory.

Inspired by the likes of musical heroes Stevie Wonder, Kurt Elling, and Gregory Porter, as well as mentors such as J.D. Walter and the late Al Jarreau (who oversaw the 2015 Shure Montreux Jazz Voice Competition that Ms. Engibaryan won), her latest offerings are a beautifully diverse mix of traditional and contemporary jazz.

At Michigan Engineering,
we are turning science fiction into science fact.

Discover the future at engin.umich.edu

“Live the life you imagined”

Stop by to get your pass for 2 weeks free!

Post-Performance Artist Q&A: Grupo Corpo
(Power Center Auditorium)
Must have a ticket to that evening’s performance to attend.

You Can Dance: Grupo Corpo
(Ann Arbor Y, 400 W. Washington Street, 1:30 pm) Registration opens 45 minutes prior to the start of the event.

Post-Performance Artist Q&A: Isango Ensemble
(Power Center Auditorium)
Must have a ticket to that evening’s performance to attend.