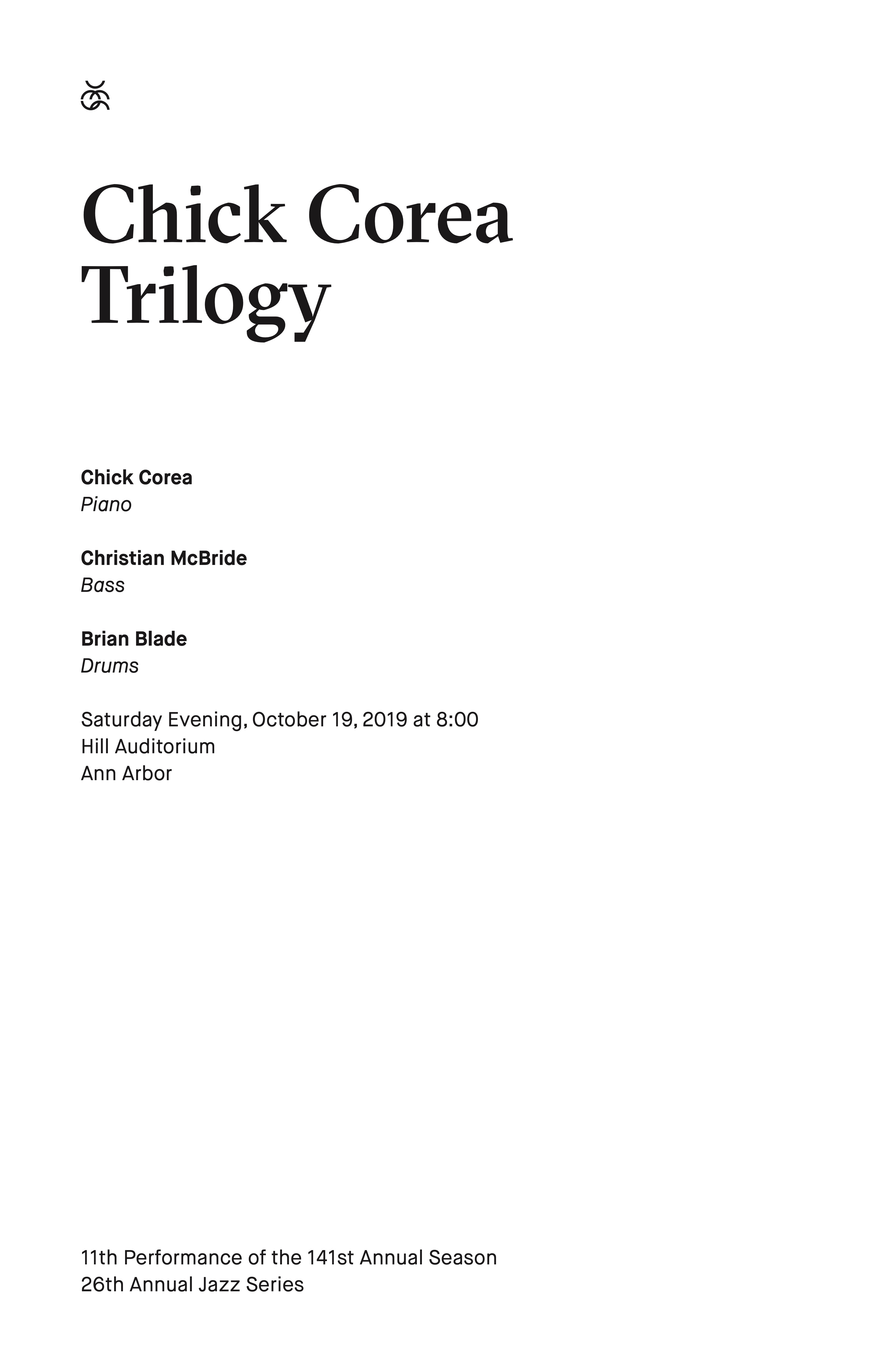 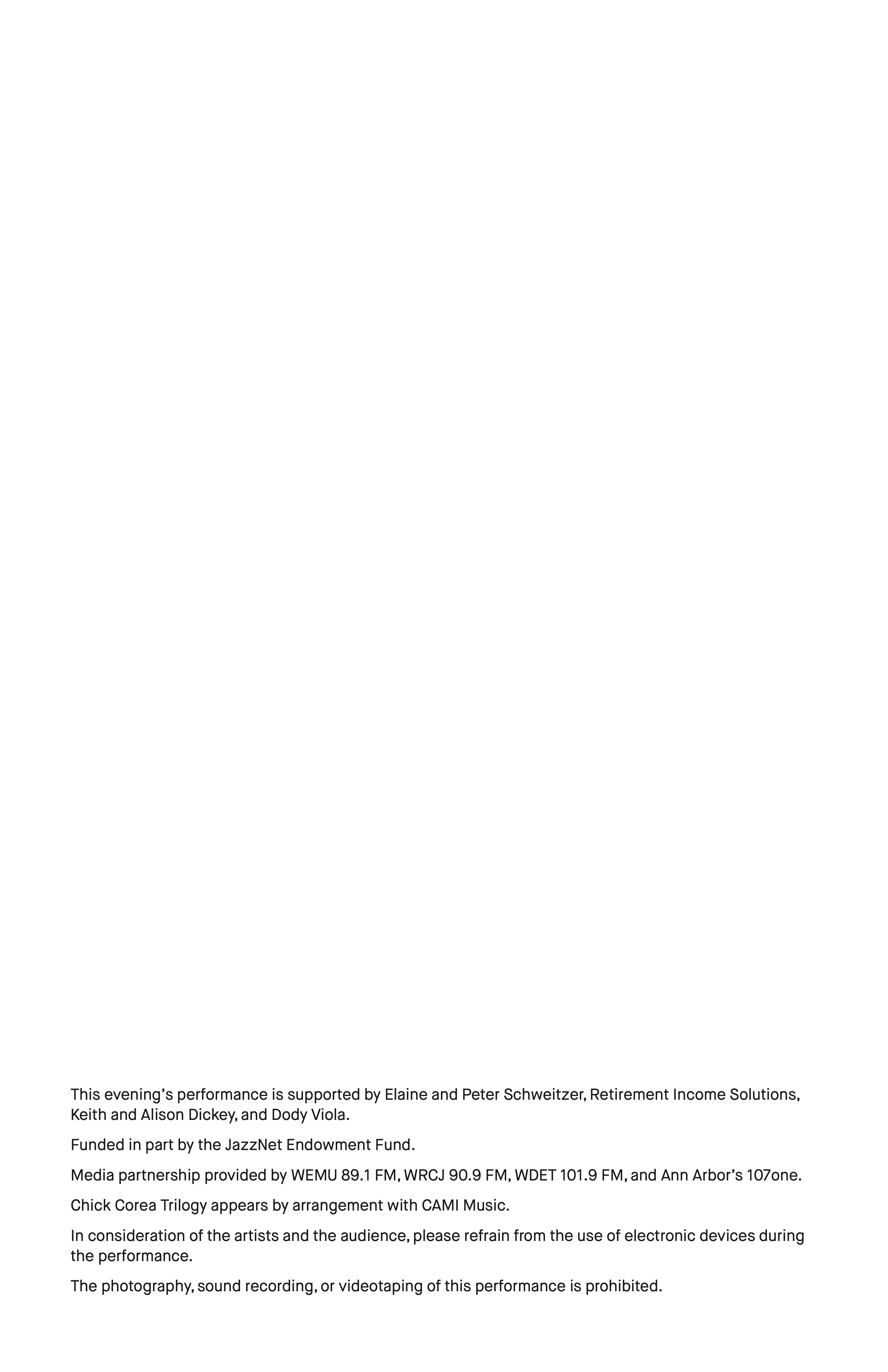 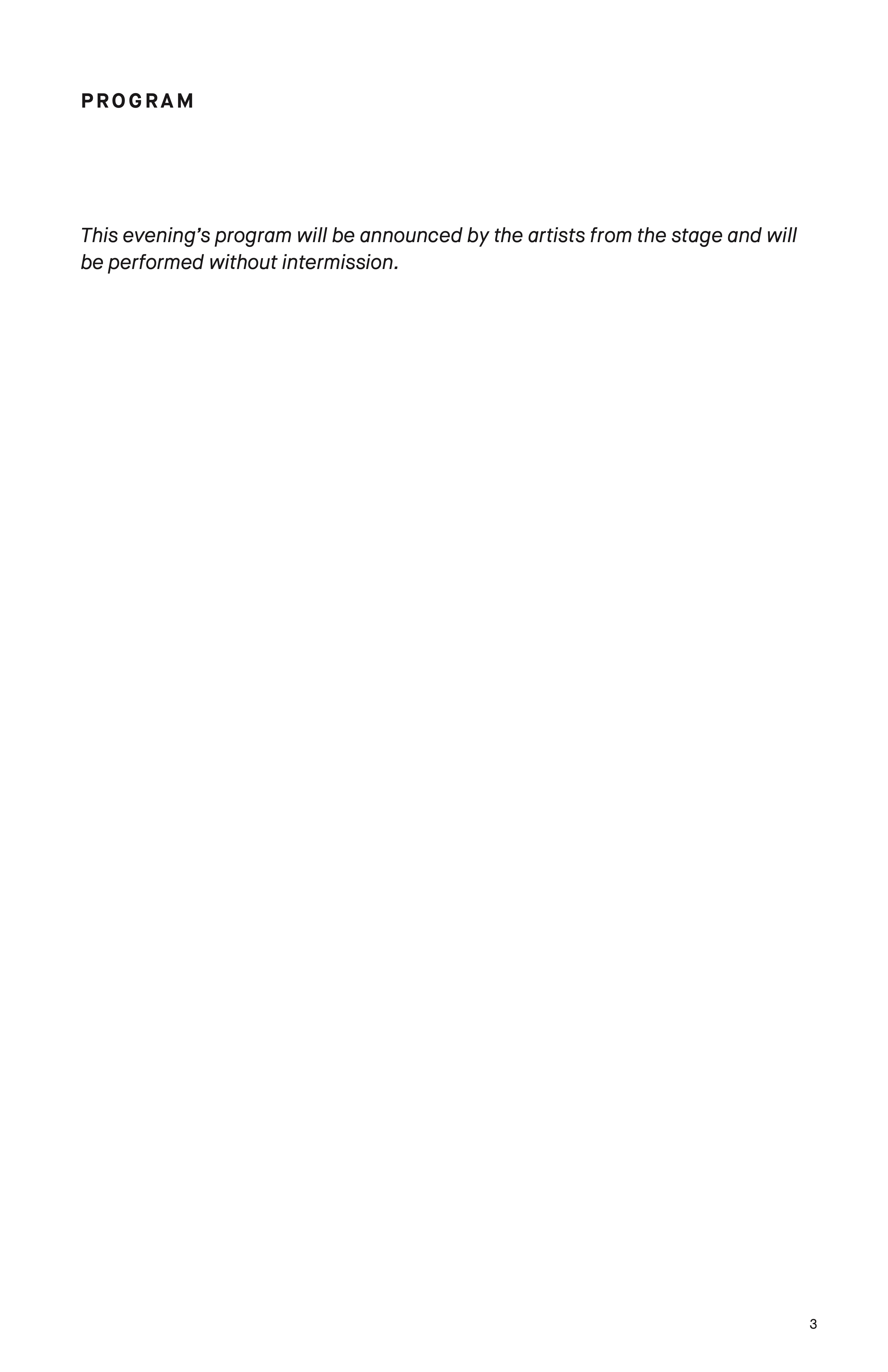 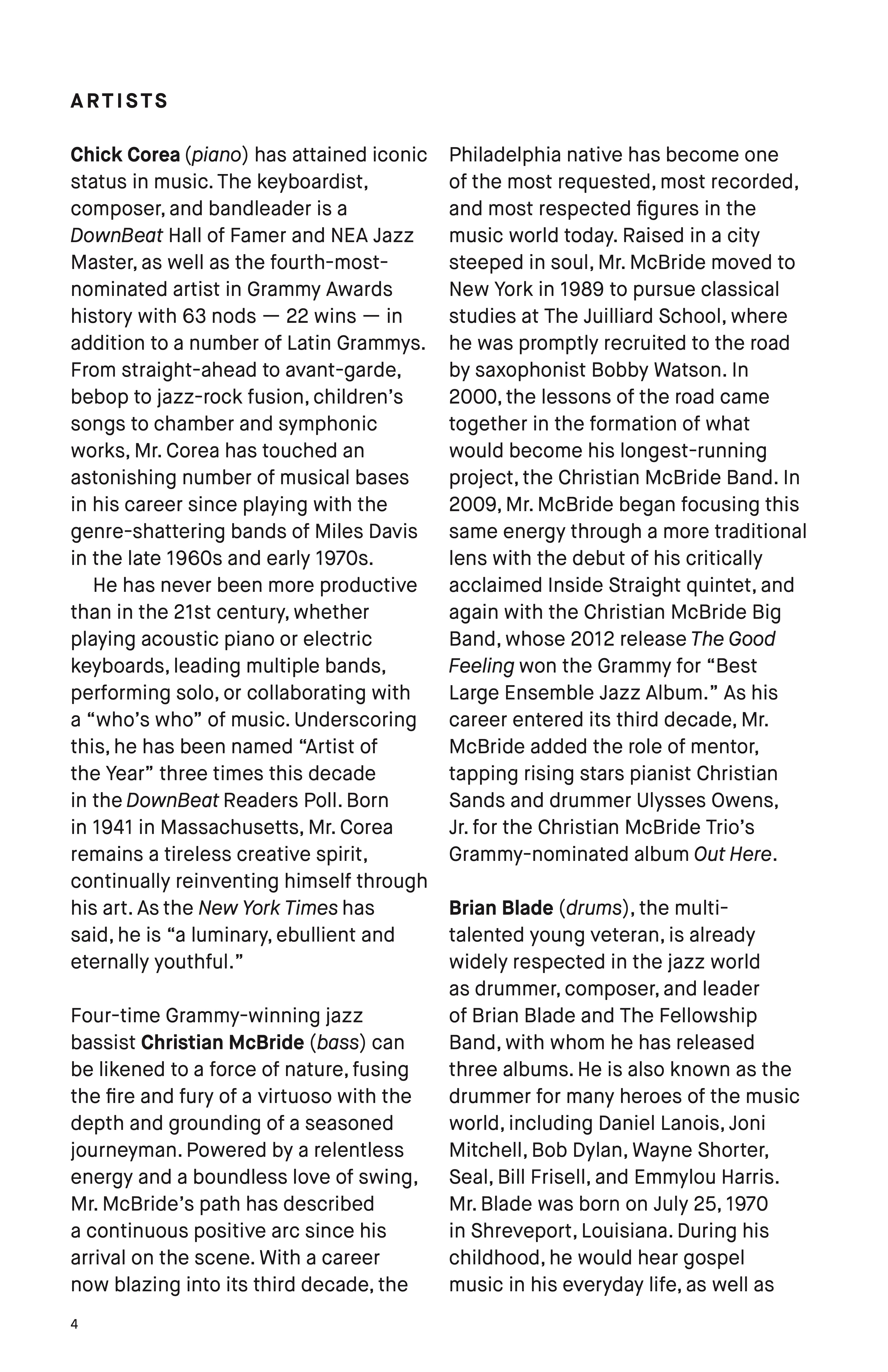 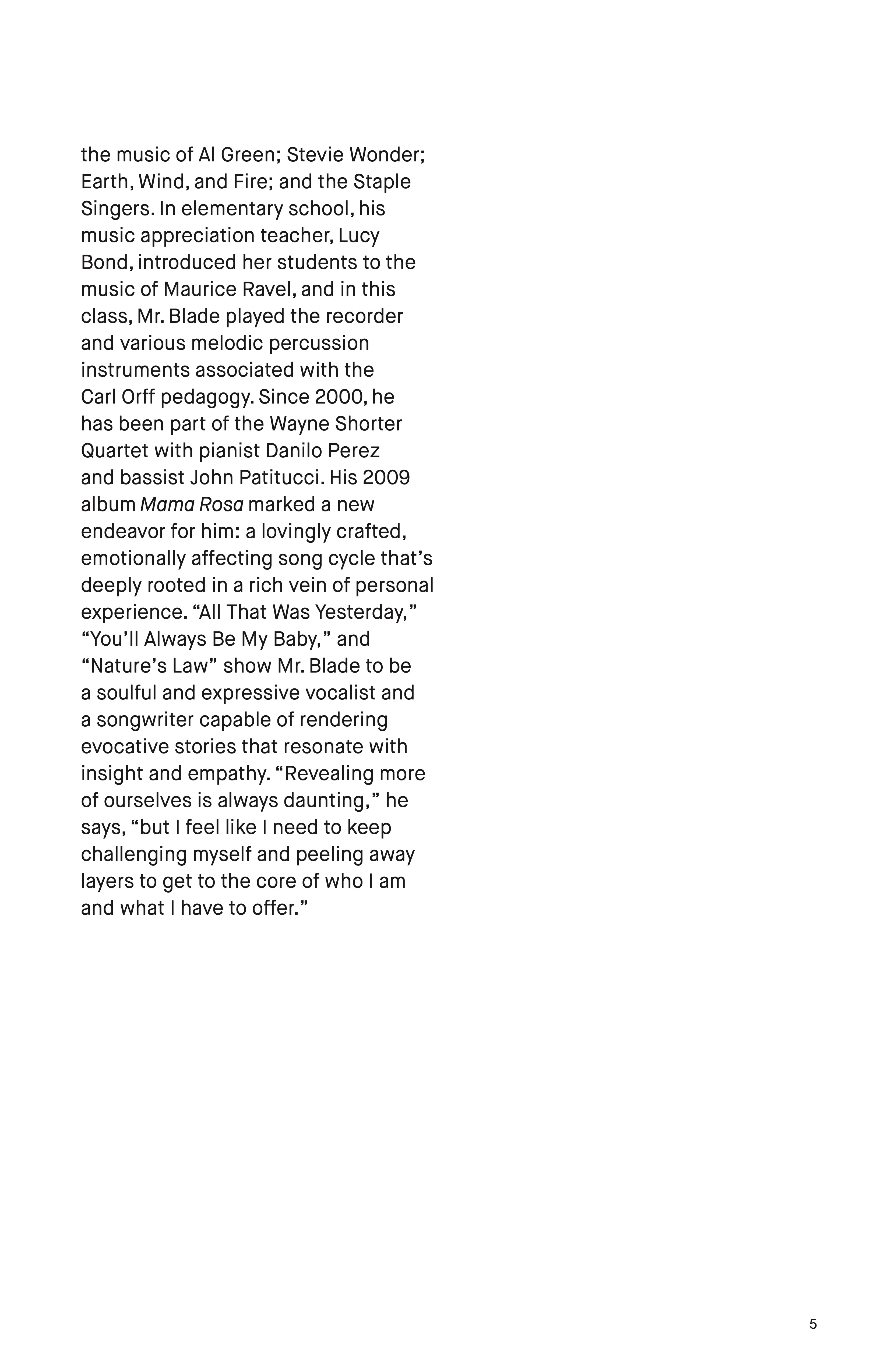 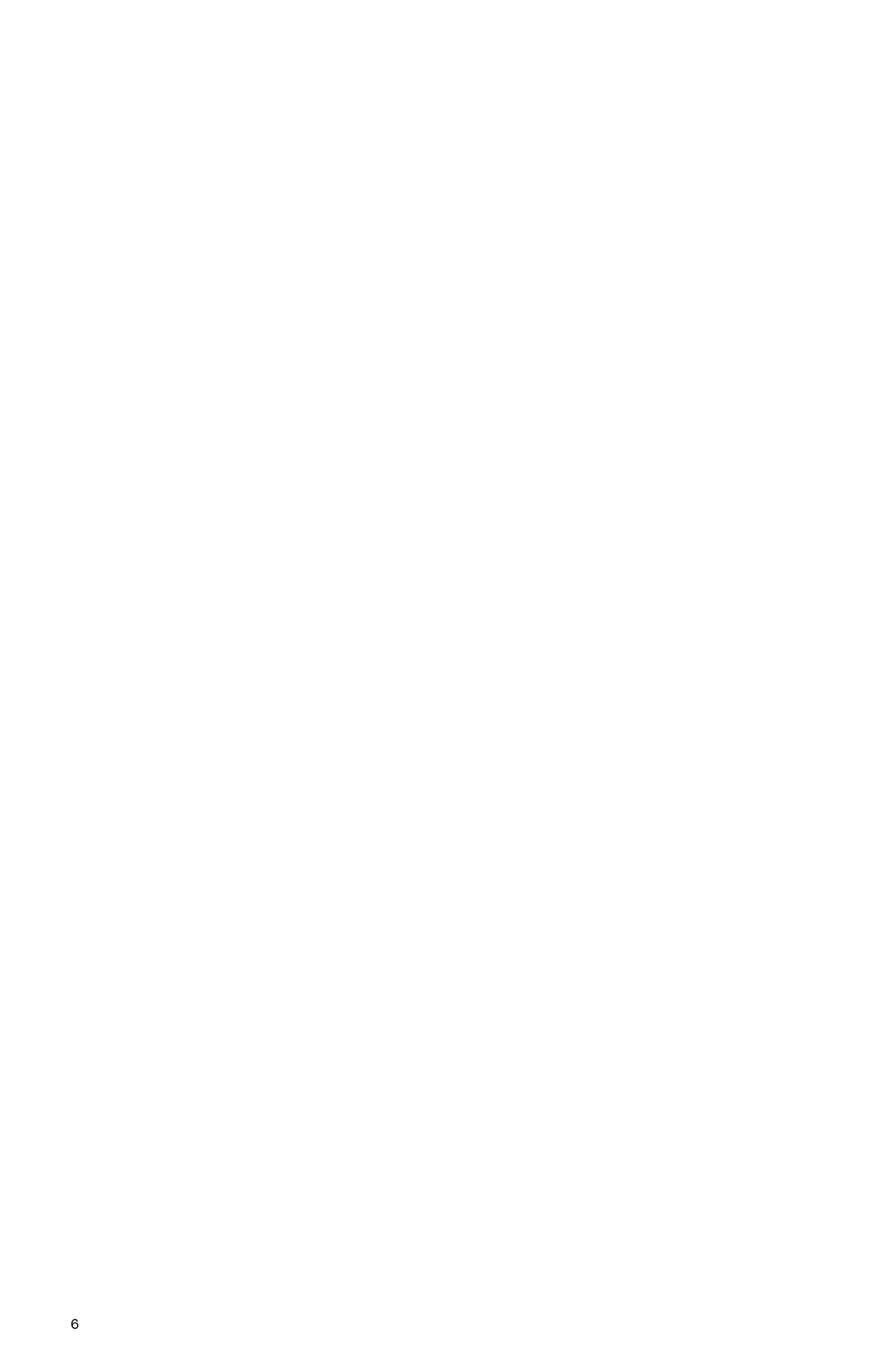 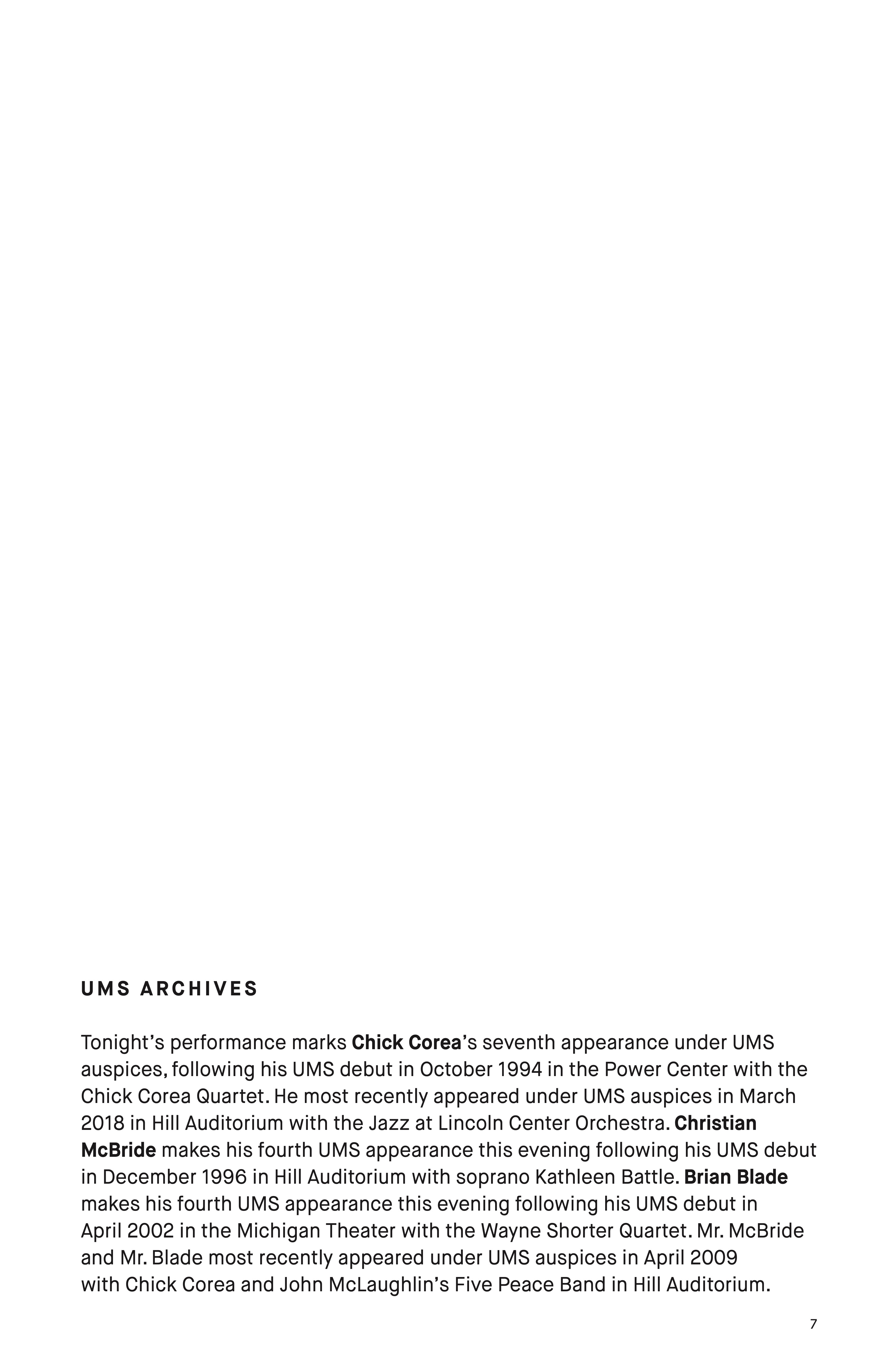 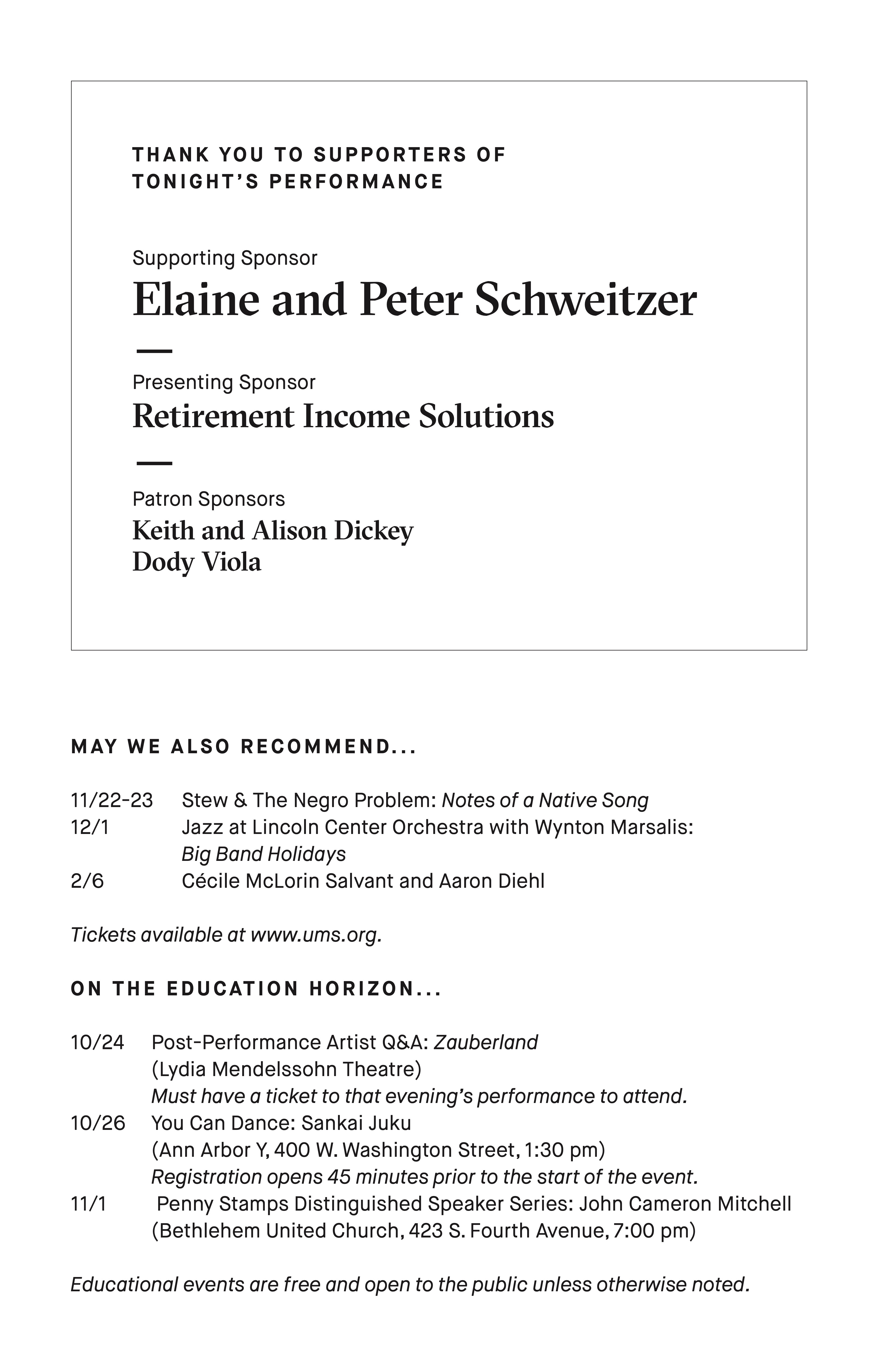 This evening’s performance is supported by Elaine and Peter Schweitzer, Retirement Income Solutions, Keith and Alison Dickey, and Dody Viola.

Funded in part by the JazzNet Endowment Fund.

This evening’s program will be announced by the artists from the stage and will be performed without intermission.

Chick Corea (piano) has attained iconic status in music. The keyboardist, composer, and bandleader is a DownBeat Hall of Famer and NEA Jazz Master, as well as the fourth-most- nominated artist in Grammy Awards history with 63 nods — 22 wins — in addition to a number of Latin Grammys. From straight-ahead to avant-garde, bebop to jazz-rock fusion, children’s songs to chamber and symphonic works, Mr. Corea has touched an astonishing number of musical bases in his career since playing with the genre-shattering bands of Miles Davis in the late 1960s and early 1970s.

He has never been more productive than in the 21st century, whether playing acoustic piano or electric keyboards, leading multiple bands, performing solo, or collaborating with a “who’s who” of music. Underscoring this, he has been named “Artist of

the Year” three times this decade
in the DownBeat Readers Poll. Born
in 1941 in Massachusetts, Mr. Corea remains a tireless creative spirit, continually reinventing himself through his art. As the New York Times has
said, he is “a luminary, ebullient and eternally youthful.”

Four-time Grammy-winning jazz bassist Christian McBride (bass) can be likened to a force of nature, fusing the fire and fury of a virtuoso with the depth and grounding of a seasoned journeyman. Powered by a relentless energy and a boundless love of swing, Mr. McBride’s path has described
a continuous positive arc since his arrival on the scene. With a career now blazing into its third decade, the

Philadelphia native has become one
of the most requested, most recorded, and most respected figures in the music world today. Raised in a city steeped in soul, Mr. McBride moved to New York in 1989 to pursue classical studies at The Juilliard School, where he was promptly recruited to the road by saxophonist Bobby Watson. In
2000, the lessons of the road came together in the formation of what would become his longest-running project, the Christian McBride Band. In 2009, Mr. McBride began focusing this same energy through a more traditional lens with the debut of his critically acclaimed Inside Straight quintet, and again with the Christian McBride Big Band, whose 2012 release The Good Feeling won the Grammy for “Best Large Ensemble Jazz Album.” As his career entered its third decade, Mr. McBride added the role of mentor, tapping rising stars pianist Christian Sands and drummer Ulysses Owens,
Jr. for the Christian McBride Trio’s Grammy-nominated album Out Here.

Brian Blade (drums), the multi- talented young veteran, is already widely respected in the jazz world
as drummer, composer, and leader
of Brian Blade and The Fellowship Band, with whom he has released three albums. He is also known as the drummer for many heroes of the music world, including Daniel Lanois, Joni Mitchell, Bob Dylan, Wayne Shorter, Seal, Bill Frisell, and Emmylou Harris. Mr. Blade was born on July 25, 1970

in Shreveport, Louisiana. During his childhood, he would hear gospel music in his everyday life, as well as

the music of Al Green; Stevie Wonder; Earth, Wind, and Fire; and the Staple Singers. In elementary school, his music appreciation teacher, Lucy Bond, introduced her students to the music of Maurice Ravel, and in this class, Mr. Blade played the recorder and various melodic percussion instruments associated with the

Carl Orff pedagogy. Since 2000, he
has been part of the Wayne Shorter Quartet with pianist Danilo Perez
and bassist John Patitucci. His 2009 album Mama Rosa marked a new endeavor for him: a lovingly crafted, emotionally affecting song cycle that’s deeply rooted in a rich vein of personal experience. “All That Was Yesterday,” “You’ll Always Be My Baby,” and “Nature’s Law” show Mr. Blade to be

a soulful and expressive vocalist and a songwriter capable of rendering evocative stories that resonate with insight and empathy. “Revealing more of ourselves is always daunting,” he says, “but I feel like I need to keep challenging myself and peeling away layers to get to the core of who I am and what I have to offer.”

April 2002 in the Michigan Theater with the Wayne Shorter Quartet. Mr. McBride and Mr. Blade most recently appeared under UMS auspices in April 2009
with Chick Corea and John McLaughlin’s Five Peace Band in Hill Auditorium.

Post-Performance Artist Q&A: Zauberland
(Lydia Mendelssohn Theatre)
Must have a ticket to that evening’s performance to attend. You Can Dance: Sankai Juku
(Ann Arbor Y, 400 W. Washington Street, 1:30 pm) Registration opens 45 minutes prior to the start of the event.