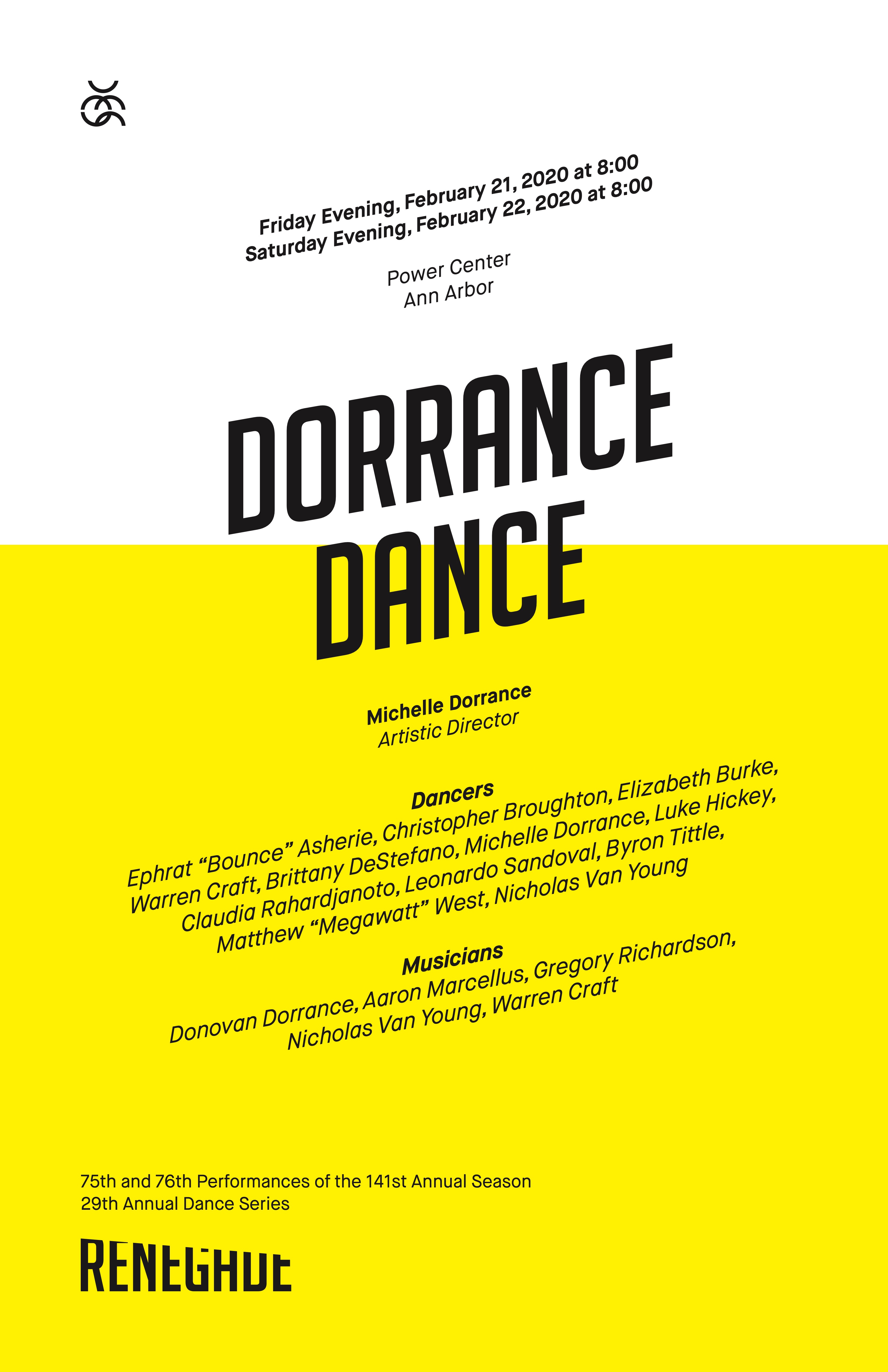 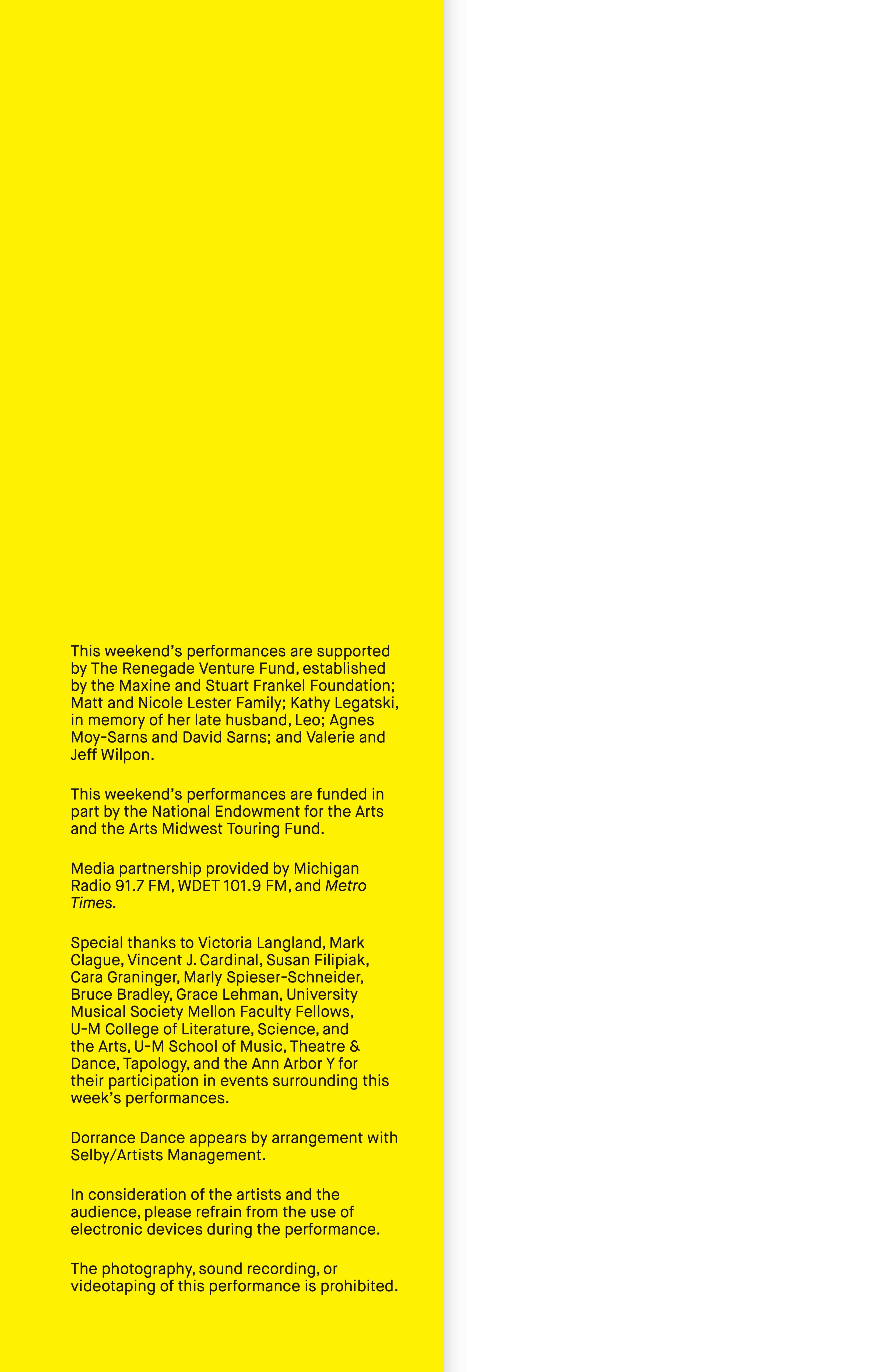 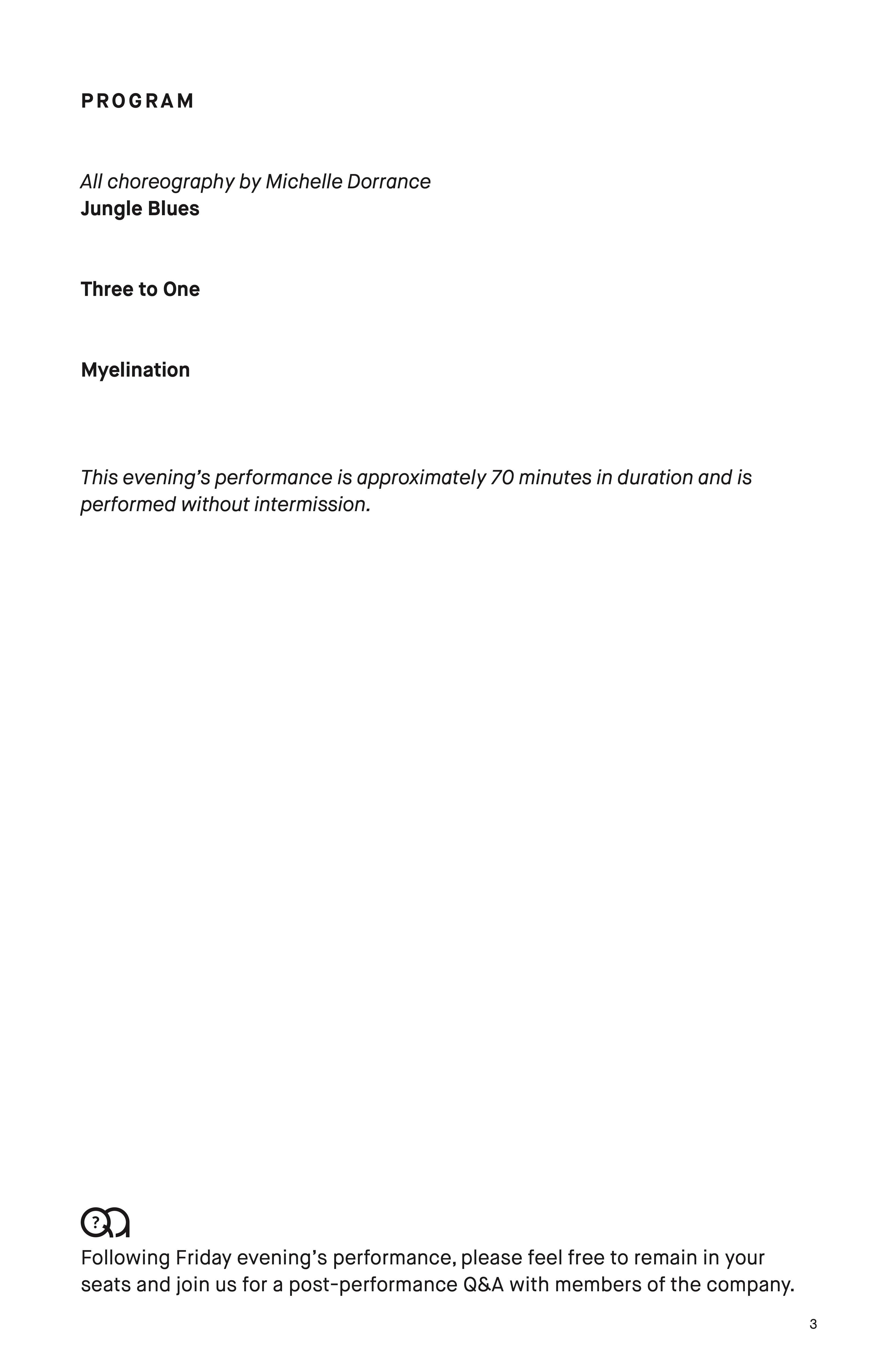 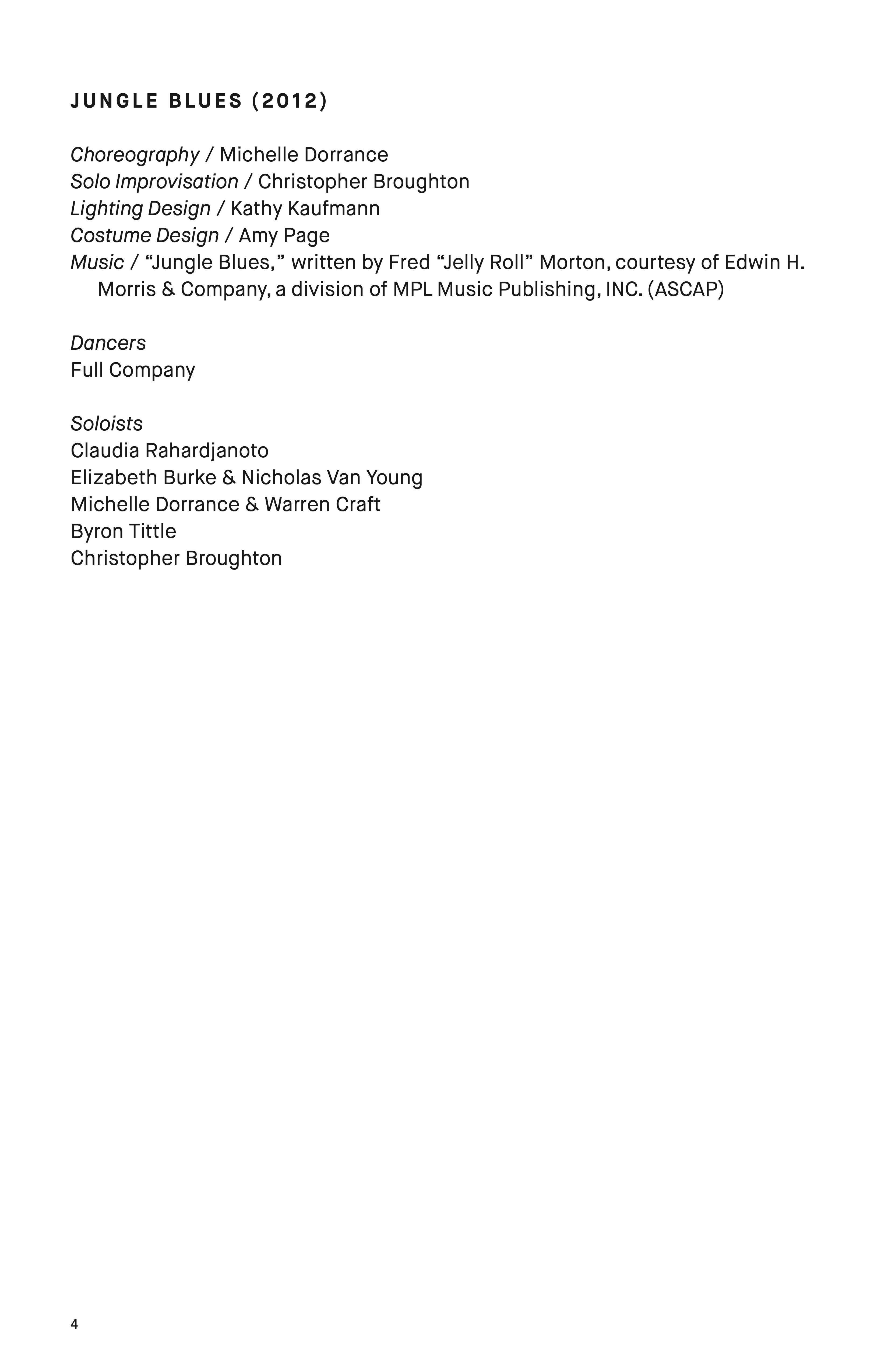 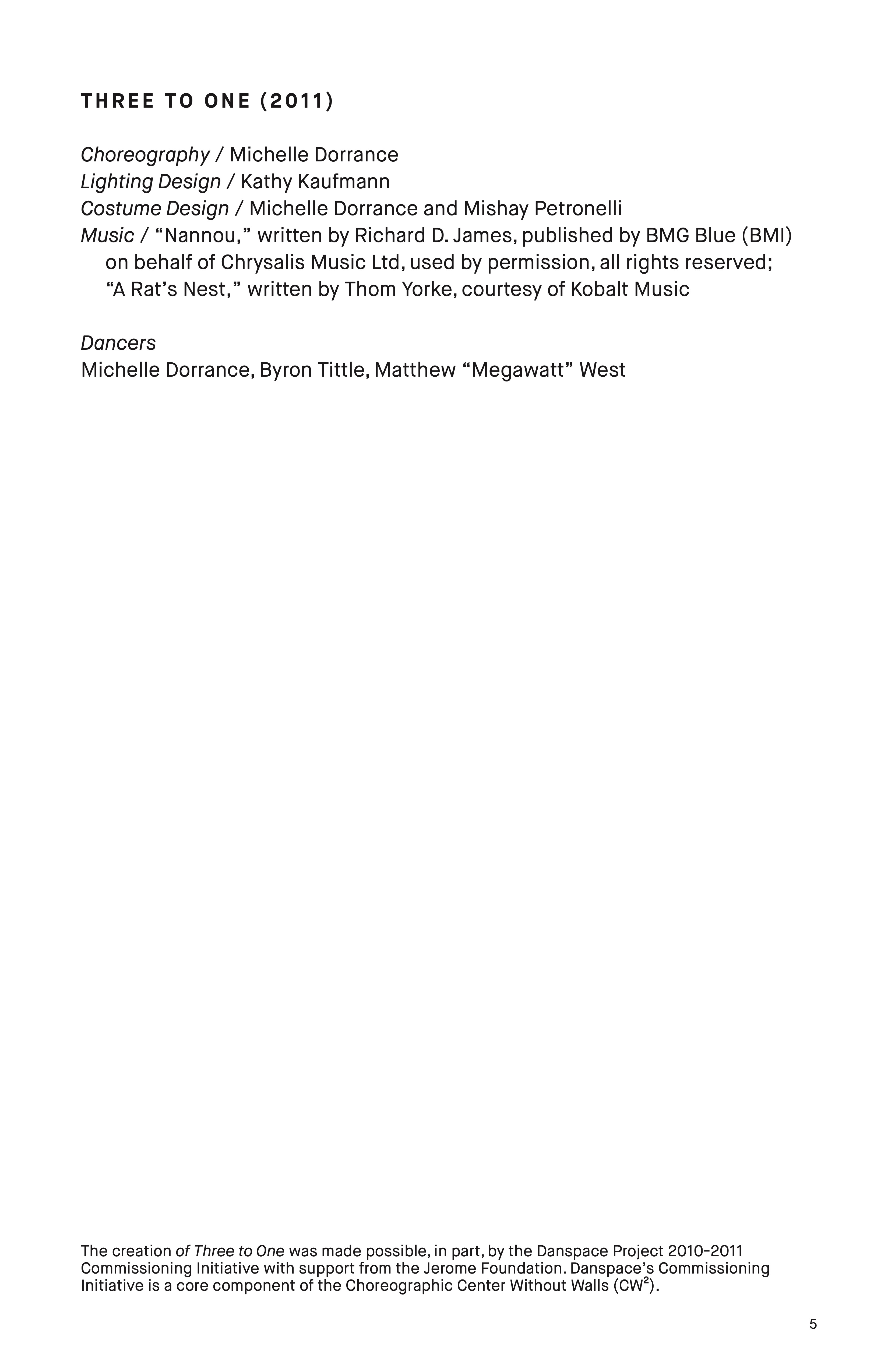 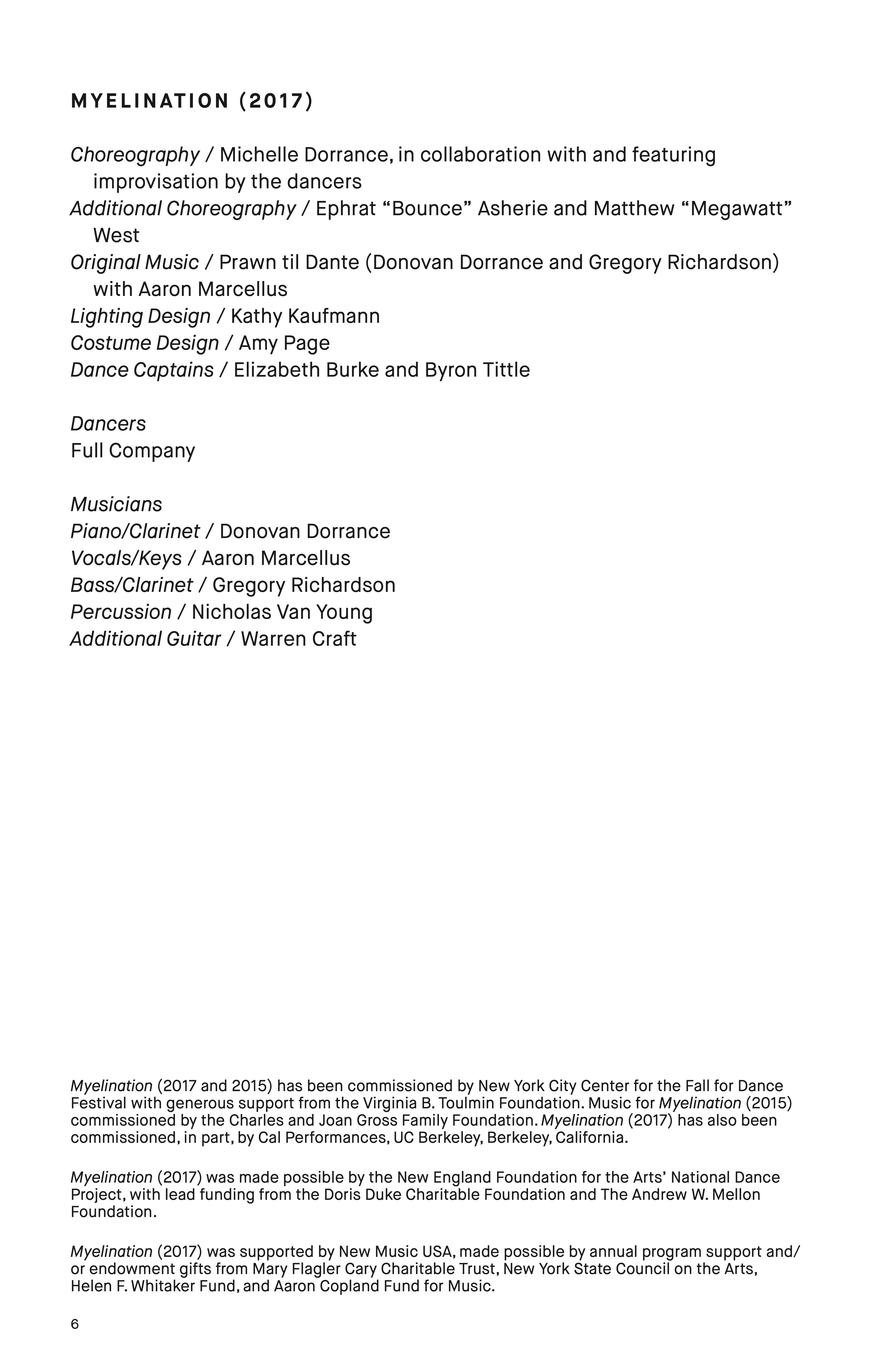 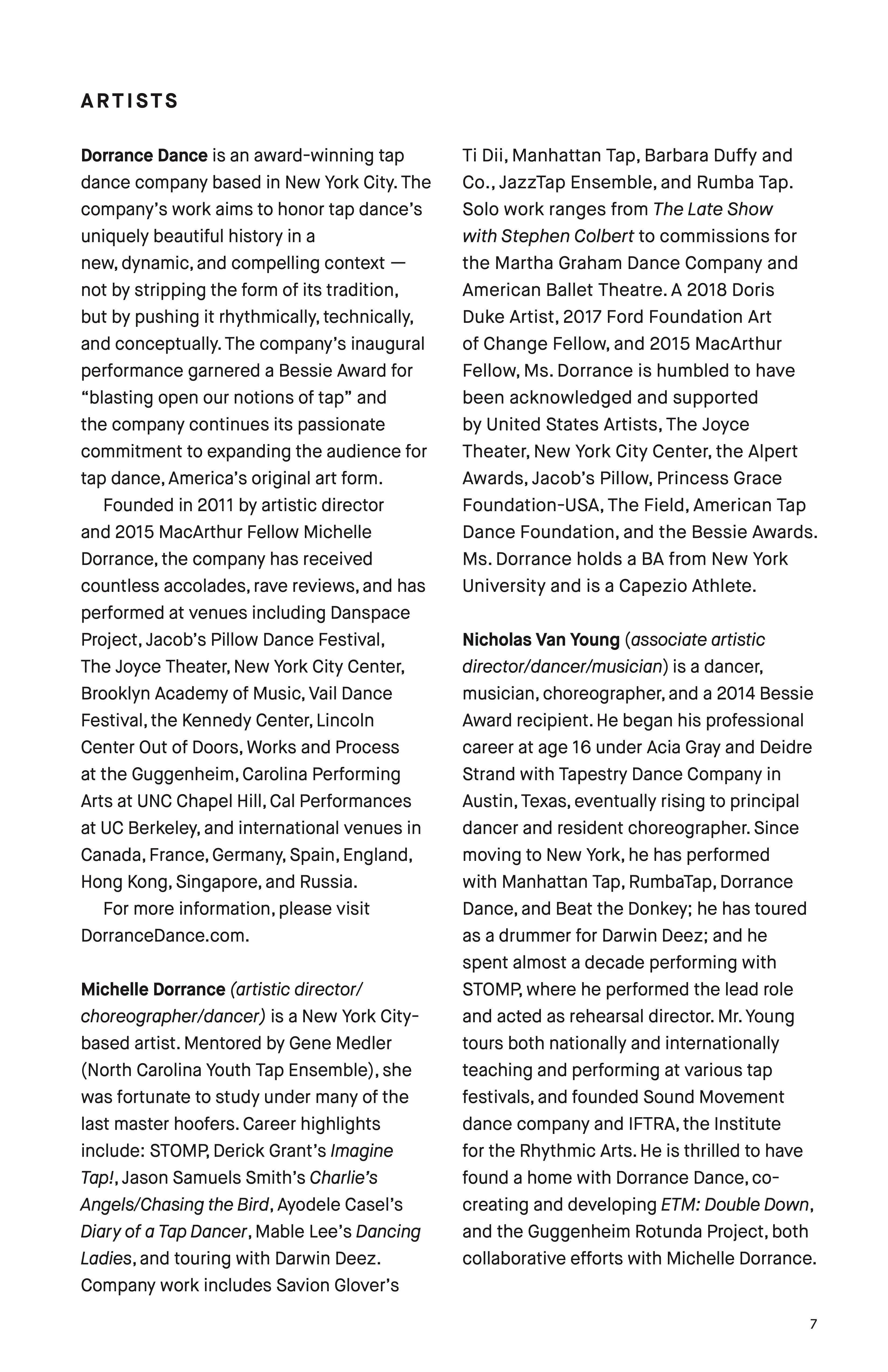 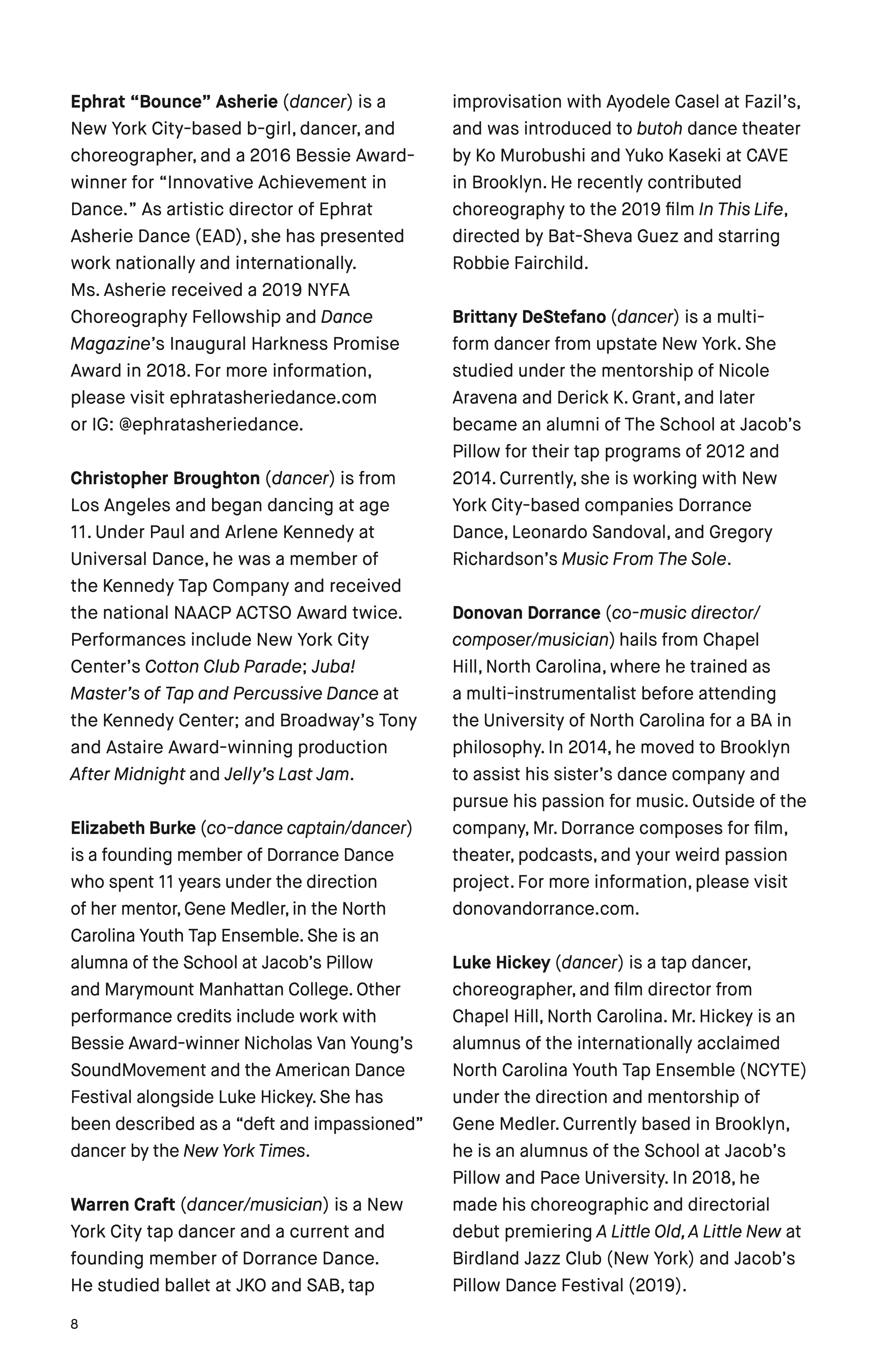 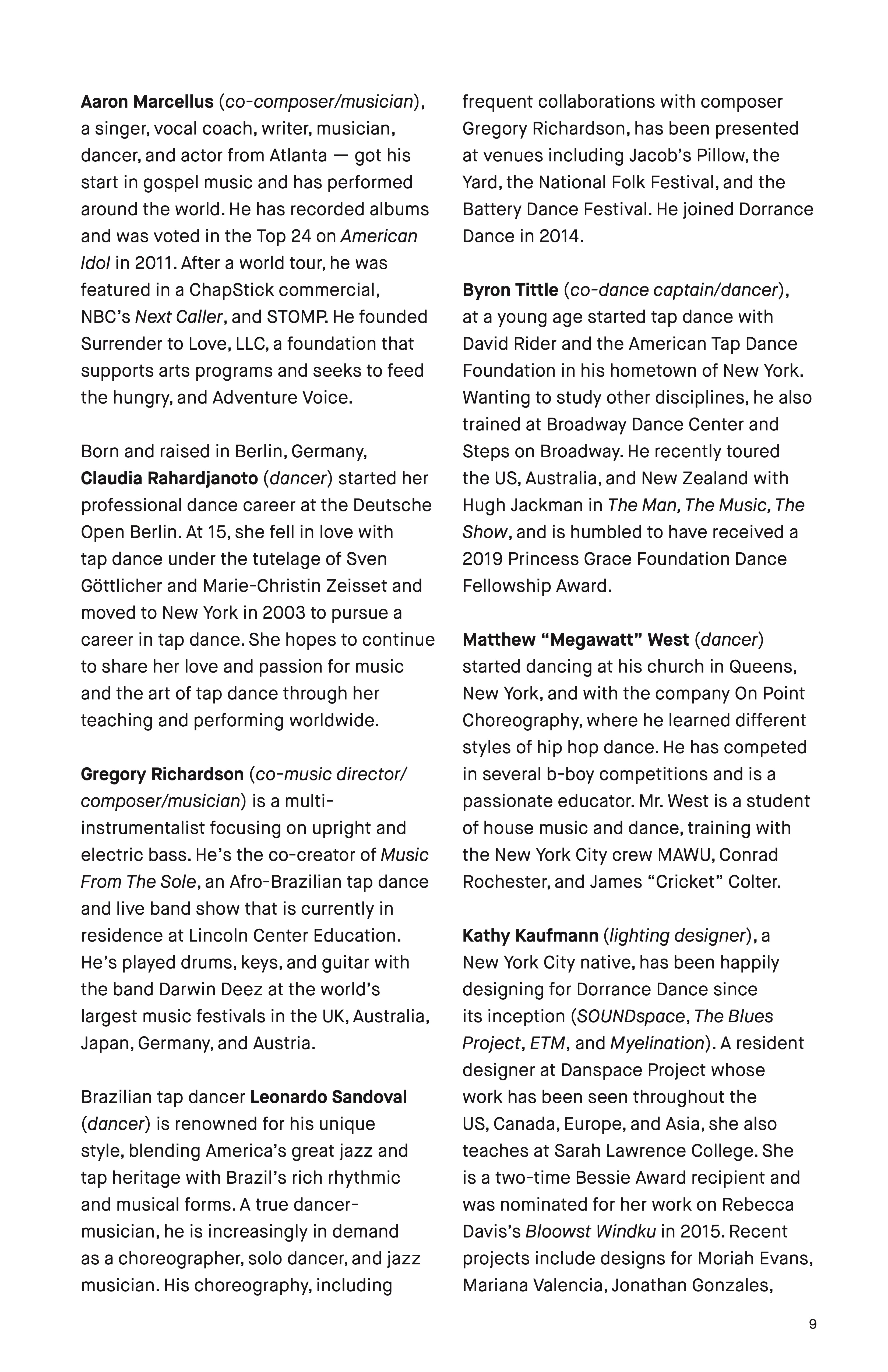 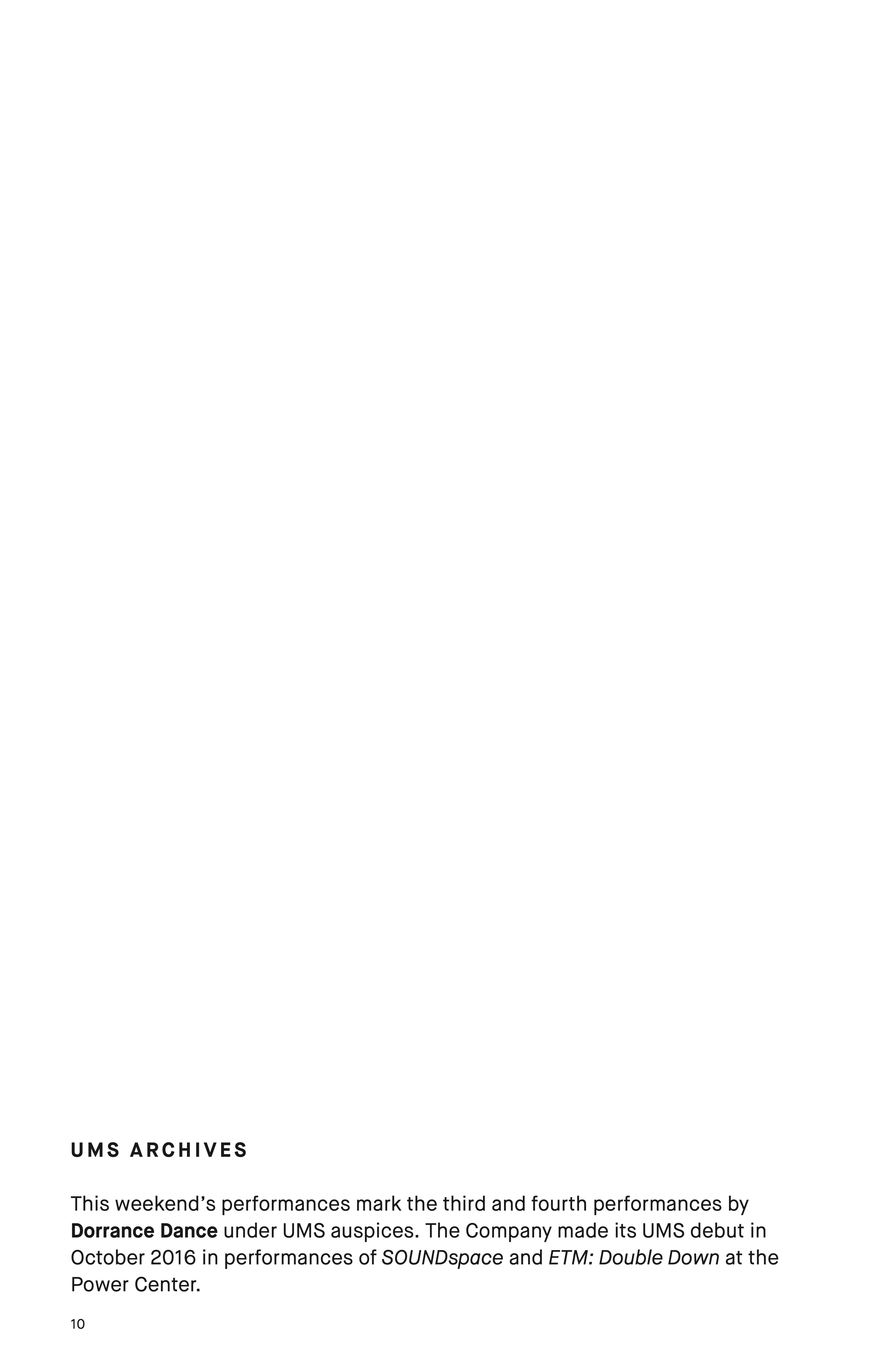 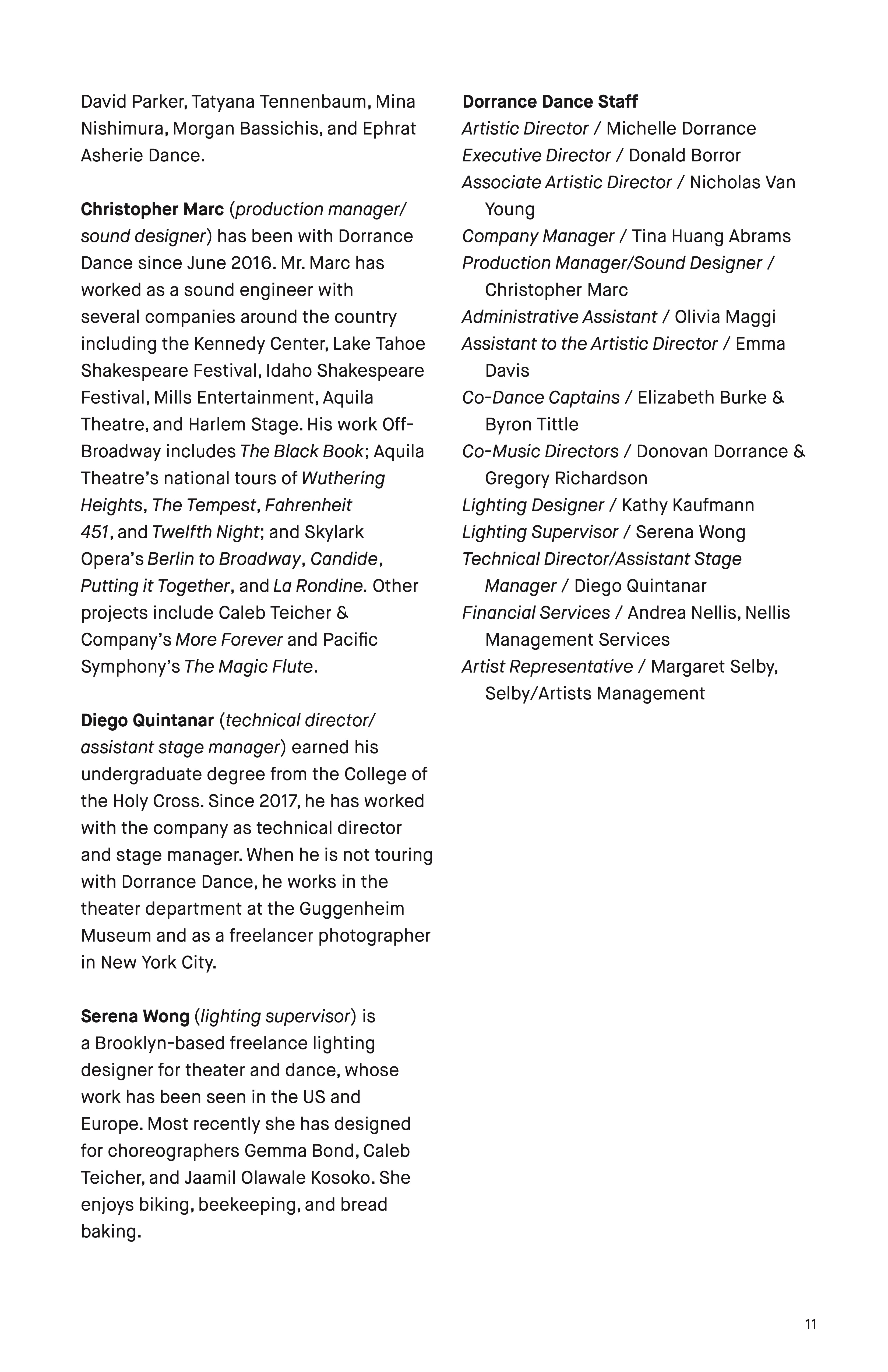 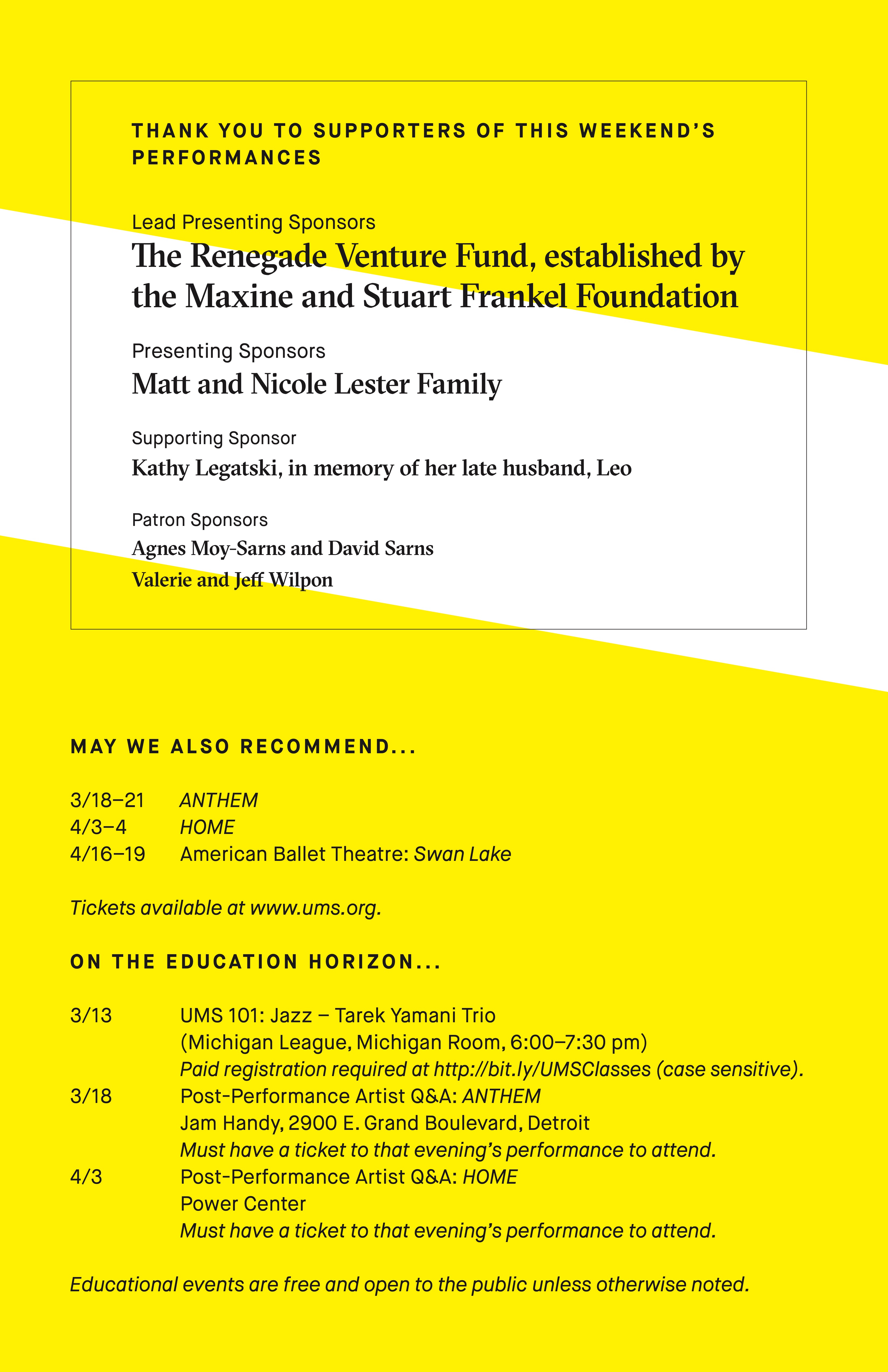 This weekend’s performances are supported by The Renegade Venture Fund, established by the Maxine and Stuart Frankel Foundation; Matt and Nicole Lester Family; Kathy Legatski, in memory of her late husband, Leo; Agnes Moy-Sarns and David Sarns; and Valerie and Jeff Wilpon.

This weekend’s performances are funded in part by the National Endowment for the Arts and the Arts Midwest Touring Fund.

All choreography by Michelle Dorrance

Jungle Blues Three to One Myelination

This evening’s performance is approximately 70 minutes in duration and is performed without intermission.

Following Friday evening’s performance, please feel free to remain in your seats and join us for a post-performance Q&A with members of the company.

on behalf of Chrysalis Music Ltd, used by permission, all rights reserved; “A Rat’s Nest,” written by Thom Yorke, courtesy of Kobalt Music

Choreography / Michelle Dorrance, in collaboration with and featuring improvisation by the dancers

Myelination (2017) was made possible by the New England Foundation for the Arts’ National Dance Project, with lead funding from the Doris Duke Charitable Foundation and The Andrew W. Mellon Foundation.

Dorrance Dance is an award-winning tap dance company based in New York City. The company’s work aims to honor tap dance’s uniquely beautiful history in a

new, dynamic, and compelling context — not by stripping the form of its tradition, but by pushing it rhythmically, technically, and conceptually. The company’s inaugural performance garnered a Bessie Award for “blasting open our notions of tap” and

Founded in 2011 by artistic director
and 2015 MacArthur Fellow Michelle Dorrance, the company has received countless accolades, rave reviews, and has performed at venues including Danspace Project, Jacob’s Pillow Dance Festival,

of Change Fellow, and 2015 MacArthur Fellow, Ms. Dorrance is humbled to have been acknowledged and supported
by United States Artists, The Joyce Theater, New York City Center, the Alpert Awards, Jacob’s Pillow, Princess Grace Foundation-USA, The Field, American Tap Dance Foundation, and the Bessie Awards. Ms. Dorrance holds a BA from New York University and is a Capezio Athlete.

Nicholas Van Young (associate artistic director/dancer/musician) is a dancer, musician, choreographer, and a 2014 Bessie Award recipient. He began his professional career at age 16 under Acia Gray and Deidre Strand with Tapestry Dance Company in Austin, Texas, eventually rising to principal dancer and resident choreographer. Since moving to New York, he has performed

with Manhattan Tap, RumbaTap, Dorrance Dance, and Beat the Donkey; he has toured as a drummer for Darwin Deez; and he spent almost a decade performing with STOMP, where he performed the lead role and acted as rehearsal director. Mr. Young tours both nationally and internationally teaching and performing at various tap festivals, and founded Sound Movement dance company and IFTRA, the Institute
for the Rhythmic Arts. He is thrilled to have found a home with Dorrance Dance, co- creating and developing ETM: Double Down, and the Guggenheim Rotunda Project, both collaborative efforts with Michelle Dorrance.

Ephrat “Bounce” Asherie (dancer) is a New York City-based b-girl, dancer, and choreographer, and a 2016 Bessie Award- winner for “Innovative Achievement in Dance.” As artistic director of Ephrat Asherie Dance (EAD), she has presented work nationally and internationally.

improvisation with Ayodele Casel at Fazil’s, and was introduced to butoh dance theater by Ko Murobushi and Yuko Kaseki at CAVE in Brooklyn. He recently contributedchoreography to the 2019 film In This Life, directed by Bat-Sheva Guez and starring Robbie Fairchild.

Brittany DeStefano (dancer) is a multi- form dancer from upstate New York. She studied under the mentorship of Nicole Aravena and Derick K. Grant, and later became an alumni of The School at Jacob’s Pillow for their tap programs of 2012 and 2014. Currently, she is working with New York City-based companies Dorrance Dance, Leonardo Sandoval, and Gregory Richardson’s Music From The Sole.

Christopher Broughton (dancer) is from Los Angeles and began dancing at age
11. Under Paul and Arlene Kennedy at Universal Dance, he was a member of
the Kennedy Tap Company and received the national NAACP ACTSO Award twice. Performances include New York City Center’s Cotton Club Parade; Juba! Master’s of Tap and Percussive Dance at the Kennedy Center; and Broadway’s Tony and Astaire Award-winning production After Midnight and Jelly’s Last Jam.

Donovan Dorrance (co-music director/ composer/musician) hails from Chapel
Hill, North Carolina, where he trained as
a multi-instrumentalist before attending the University of North Carolina for a BA in philosophy. In 2014, he moved to Brooklyn to assist his sister’s dance company and pursue his passion for music. Outside of the company, Mr. Dorrance composes for film, theater, podcasts, and your weird passion project. For more information, please visit donovandorrance.com.

Elizabeth Burke (co-dance captain/dancer) is a founding member of Dorrance Dance who spent 11 years under the direction
of her mentor, Gene Medler, in the North Carolina Youth Tap Ensemble. She is an alumna of the School at Jacob’s Pillow

and Marymount Manhattan College. Other performance credits include work with Bessie Award-winner Nicholas Van Young’s SoundMovement and the American Dance Festival alongside Luke Hickey. She has been described as a “deft and impassioned” dancer by the New York Times.

Luke Hickey (dancer) is a tap dancer, choreographer, and film director from Chapel Hill, North Carolina. Mr. Hickey is an alumnus of the internationally acclaimed North Carolina Youth Tap Ensemble (NCYTE) under the direction and mentorship of Gene Medler. Currently based in Brooklyn, he is an alumnus of the School at Jacob’s Pillow and Pace University. In 2018, he made his choreographic and directorial debut premiering A Little Old, A Little New at Birdland Jazz Club (New York) and Jacob’s Pillow Dance Festival (2019).

Warren Craft (dancer/musician) is a New York City tap dancer and a current and founding member of Dorrance Dance. He studied ballet at JKO and SAB, tap

Aaron Marcellus (co-composer/musician), a singer, vocal coach, writer, musician, dancer, and actor from Atlanta — got his start in gospel music and has performed around the world. He has recorded albums and was voted in the Top 24 on American Idol in 2011. After a world tour, he was featured in a ChapStick commercial, NBC’s Next Caller, and STOMP. He founded Surrender to Love, LLC, a foundation that supports arts programs and seeks to feed the hungry, and Adventure Voice.

Born and raised in Berlin, Germany,
Claudia Rahardjanoto (dancer) started her professional dance career at the Deutsche Open Berlin. At 15, she fell in love with
tap dance under the tutelage of Sven Göttlicher and Marie-Christin Zeisset and moved to New York in 2003 to pursue a career in tap dance. She hopes to continue to share her love and passion for music and the art of tap dance through her teaching and performing worldwide.

Gregory Richardson (co-music director/ composer/musician) is a multi- instrumentalist focusing on upright and electric bass. He’s the co-creator of Music From The Sole, an Afro-Brazilian tap dance and live band show that is currently in residence at Lincoln Center Education. He’s played drums, keys, and guitar with the band Darwin Deez at the world’s largest music festivals in the UK, Australia, Japan, Germany, and Austria.

Brazilian tap dancer Leonardo Sandoval (dancer) is renowned for his unique style, blending America’s great jazz and tap heritage with Brazil’s rich rhythmic and musical forms. A true dancer- musician, he is increasingly in demand as a choreographer, solo dancer, and jazz musician. His choreography, including

frequent collaborations with composer Gregory Richardson, has been presented at venues including Jacob’s Pillow, the Yard, the National Folk Festival, and the Battery Dance Festival. He joined Dorrance Dance in 2014.

Byron Tittle (co-dance captain/dancer),
at a young age started tap dance with David Rider and the American Tap Dance Foundation in his hometown of New York. Wanting to study other disciplines, he also trained at Broadway Dance Center and Steps on Broadway. He recently toured the US, Australia, and New Zealand with Hugh Jackman in The Man, The Music, The Show, and is humbled to have received a 2019 Princess Grace Foundation Dance Fellowship Award.

Matthew “Megawatt” West (dancer) started dancing at his church in Queens, New York, and with the company On Point Choreography, where he learned different styles of hip hop dance. He has competed in several b-boy competitions and is a passionate educator. Mr. West is a student of house music and dance, training with the New York City crew MAWU, Conrad Rochester, and James “Cricket” Colter.

Kathy Kaufmann (lighting designer), a New York City native, has been happily designing for Dorrance Dance since
its inception (SOUNDspace, The Blues Project, ETM, and Myelination). A resident designer at Danspace Project whose work has been seen throughout the

US, Canada, Europe, and Asia, she also teaches at Sarah Lawrence College. She is a two-time Bessie Award recipient and was nominated for her work on Rebecca Davis’s Bloowst Windku in 2015. Recent projects include designs for Moriah Evans, Mariana Valencia, Jonathan Gonzales,

This weekend’s performances mark the third and fourth performances by Dorrance Dance under UMS auspices. The Company made its UMS debut in October 2016 in performances of SOUNDspace and ETM: Double Down at the Power Center.

451, and Twelfth Night; and Skylark Opera’s Berlin to Broadway, Candide, Putting it Together, and La Rondine. Other projects include Caleb Teicher & Company’s More Forever and Pacific Symphony’s The Magic Flute.

Diego Quintanar (technical director/ assistant stage manager) earned his undergraduate degree from the College of the Holy Cross. Since 2017, he has worked with the company as technical director and stage manager. When he is not touring with Dorrance Dance, he works in the theater department at the Guggenheim Museum and as a freelancer photographer in New York City.

Serena Wong (lighting supervisor) is
a Brooklyn-based freelance lighting designer for theater and dance, whose work has been seen in the US and Europe. Most recently she has designed for choreographers Gemma Bond, Caleb Teicher, and Jaamil Olawale Kosoko. She enjoys biking, beekeeping, and bread baking.

The Renegade Venture Fund, established by the Maxine and Stuart Frankel Foundation

Kathy Legatski, in memory of her late husband, Leo

Must have a ticket to that evening’s performance to attend. 4/3 Post-Performance Artist Q&A: HOME