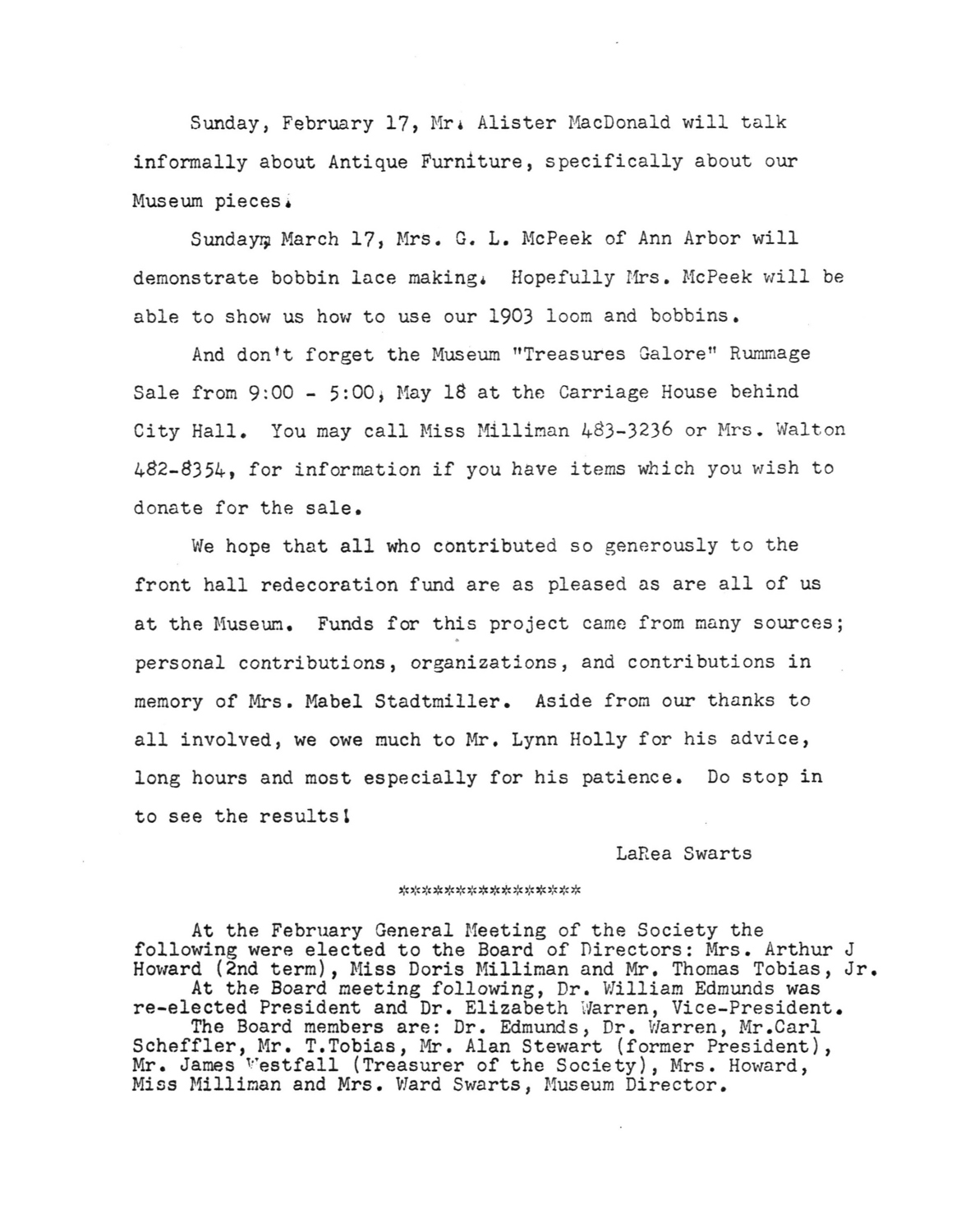 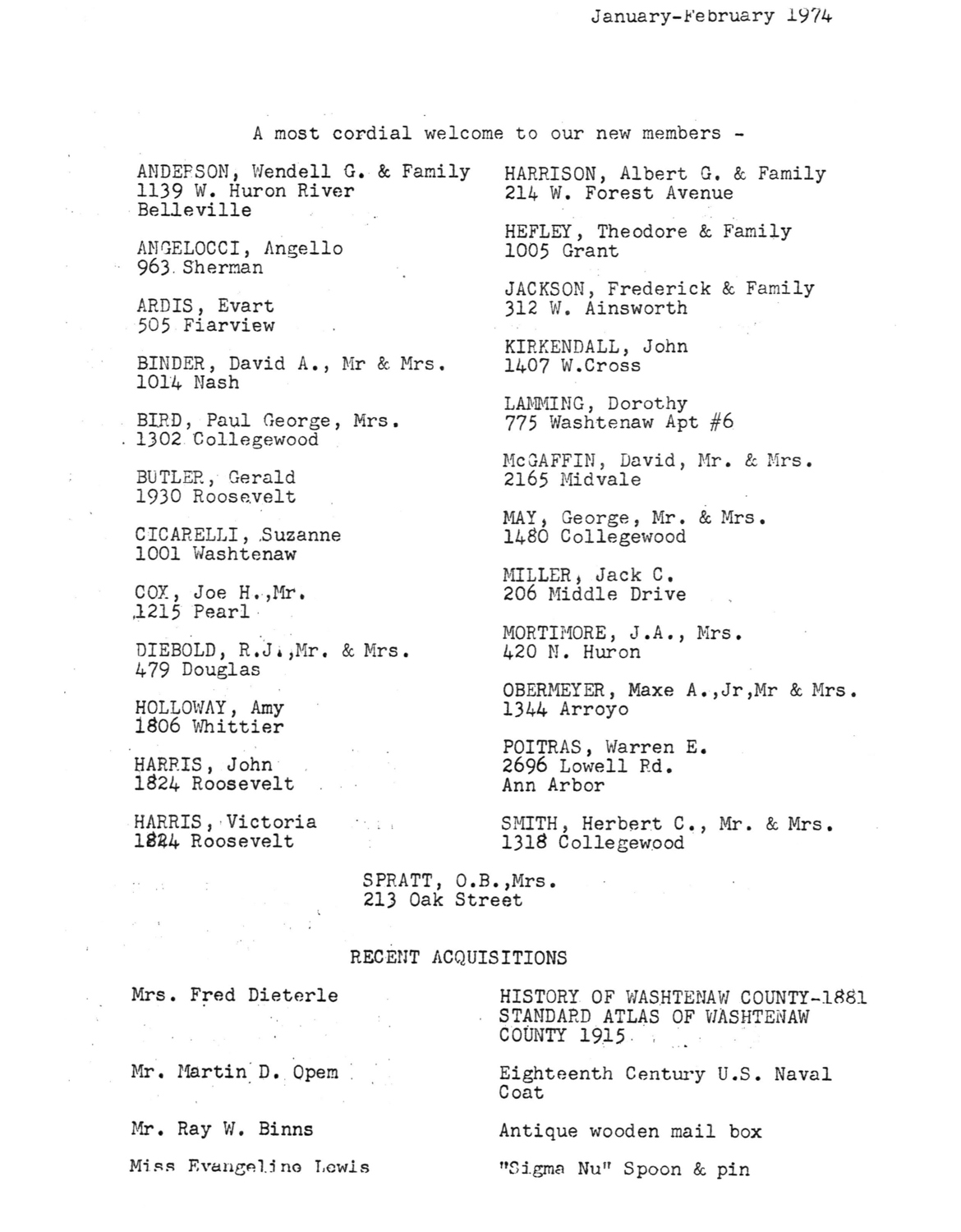 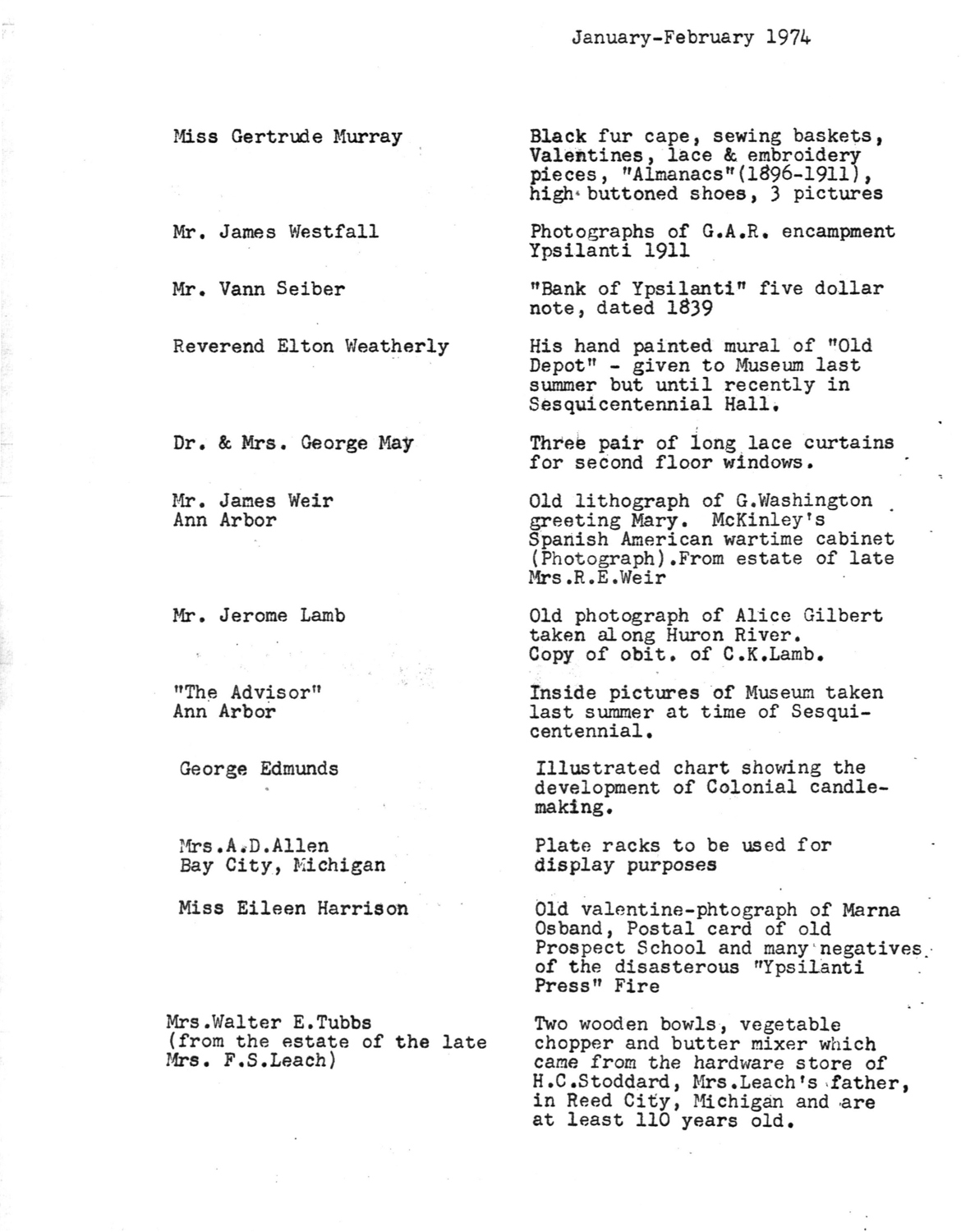 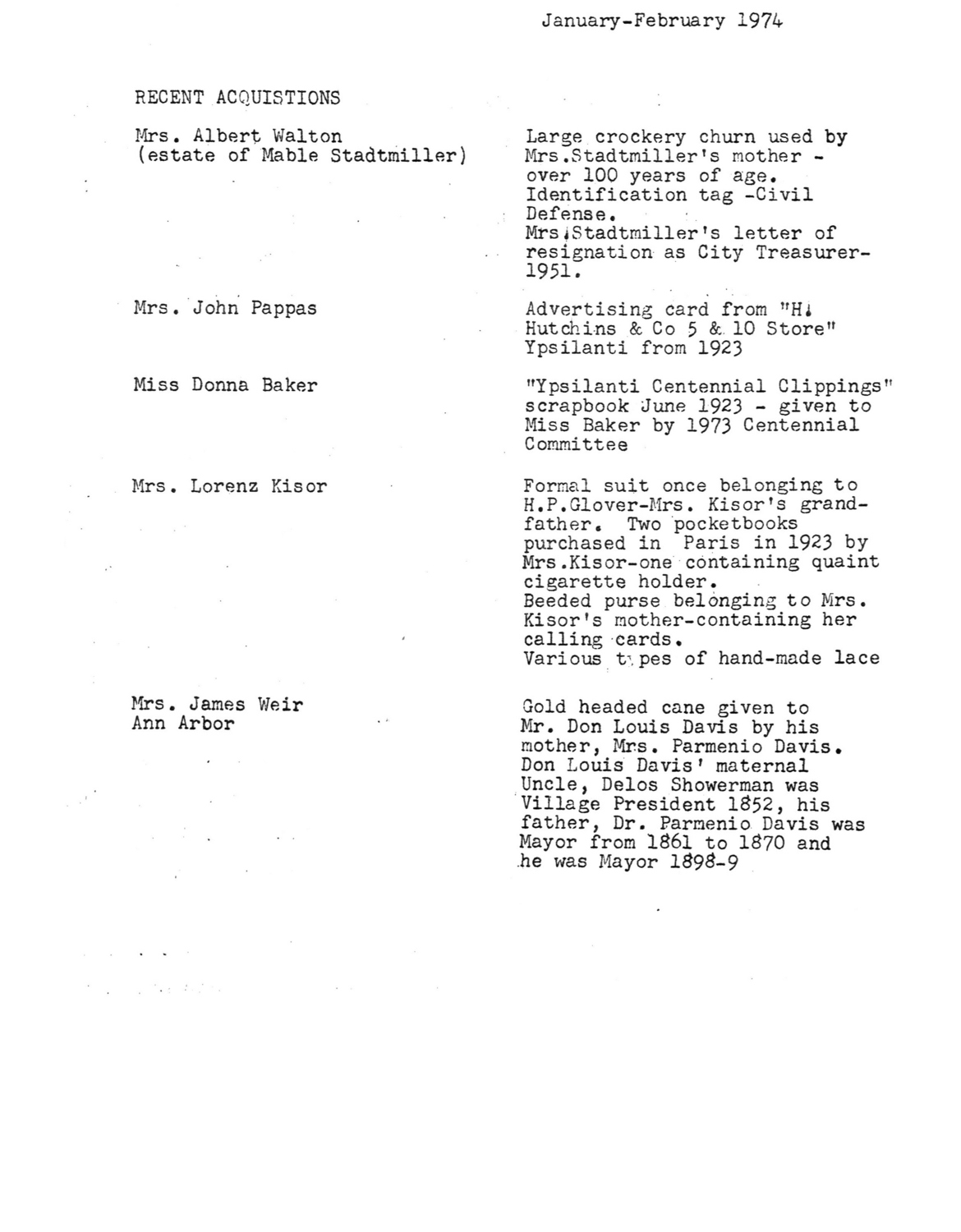 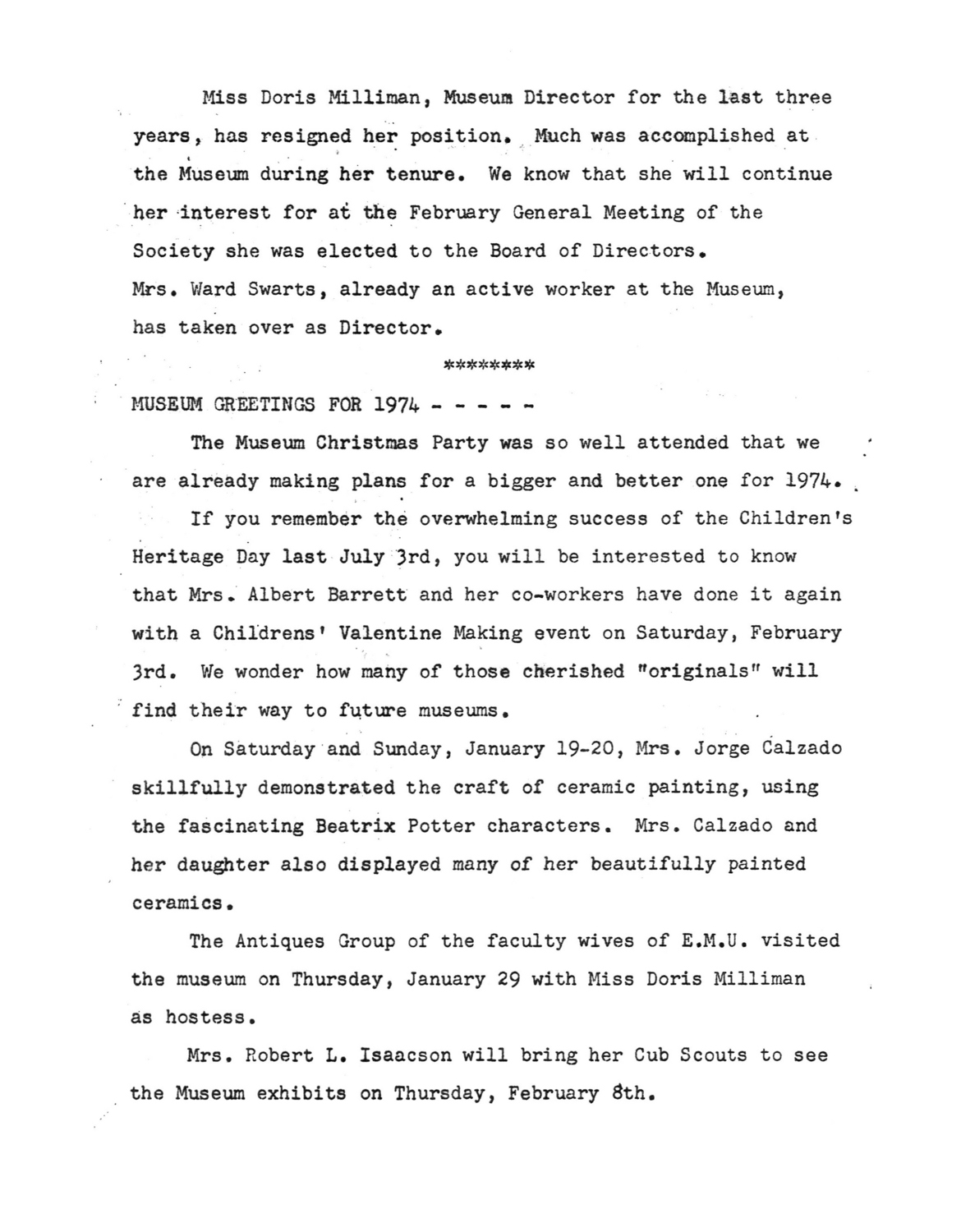 Sunday, March 17, Mrs. G. L. McPeek of Ann Arbor will demonstrate bobbin lace making. Hopefully Mrs. McPeek will be able to show us how to use our 1903 loom and bobbins.

We hope that all who contributed so generously to the front hall redecoration fund are as pleased as are all of us at the Museum. Funds for this project came from many sources; personal contributions, organizations, and contributions in memory of Mrs. Mabel Stadtmiller. Aside from our thanks to all involved, we owe much to Mr. Lynn Holly for his advice, long hours and most especially for his patience. Do stop in to see the results!

At the February General Meeting of the Society the following were elected to the Board of Directors: Mrs. Arthur J Howard (2nd term), Miss Doris Milliman and Mr. Thomas Tobias, Jr.

At the Board meeting following, Dr. William Edmunds was re-elected President and Dr. Elizabeth Warren, Vice-President.

A most cordial welcome to our new members-

Miss Doris Milliman, Museum Director for the last three years, has resigned her position. Much was accomplished at the Museum during her tenure. We know that she will continue her interest for at the February General Meeting of the Society she was elected to the Board of Directors. Mrs. Ward Swarts, already an active worker at the Museum, has taken over as Director.

The Museum Christmas Party was so well attended that we are already making plans for a bigger and better one for 1974.

If you remember the overwhelming success of the Children's Heritage Day last July 3rd, you will be interested to know that Mrs. Albert Barrett and her co-workers have done it again with a Childrens' Valentine Making event on Saturday, February 3rd. We wonder how many of those cherished “originals” will find their way to future museums.

The Antiques Group of the faculty wives of E.M.U. visited the museum on Thursday, January 29 with Miss Doris Milliman as hostess.