Notes on the Ypsilanti Heritage Festival 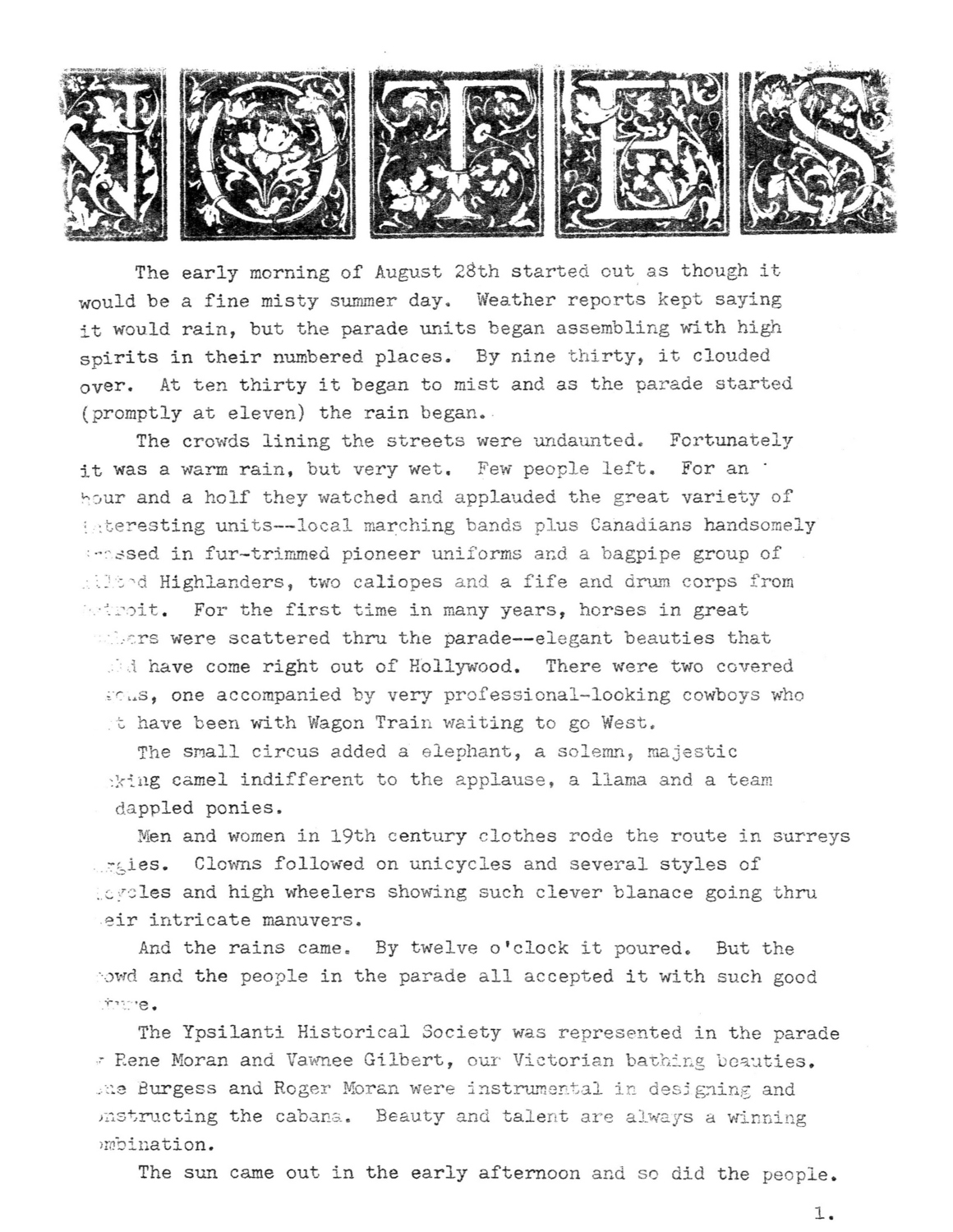 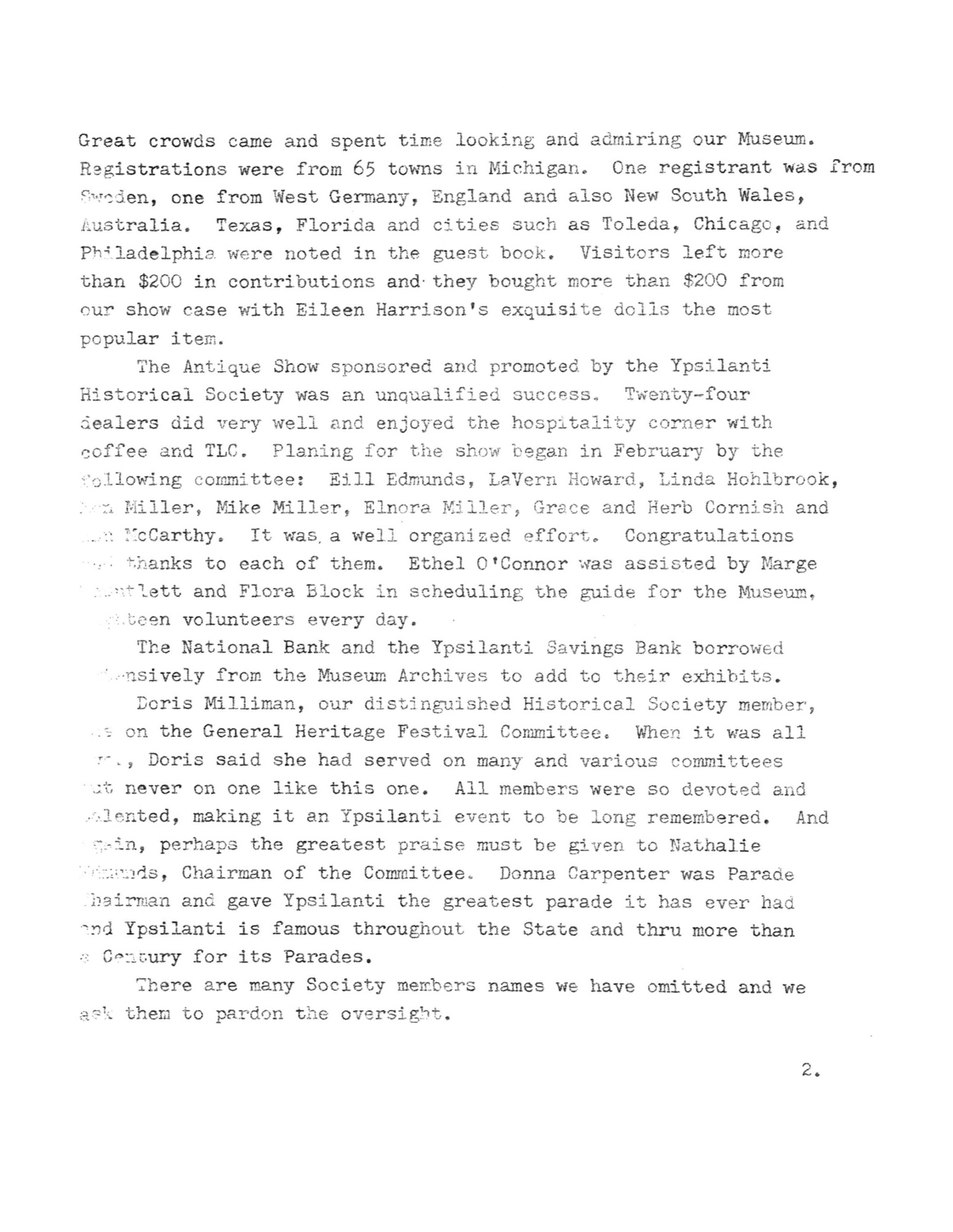 The early morning of August 28th started out as though it would be a fine misty summer day. Weather reports kept saying it would rain, but the parade units began assembling with high spirits in their numbered places. By nine thirty, it clouded over. At ten thirty it began to mist and as the parade started (promptly at eleven) the rain began.

The crowds lining the streets were undaunted. Fortunately it was a warm rain, but very wet. Few people left. For an hour and a holf they watched and applauded the great variety of interesting units—local marching bands plus Canadians handsomely ssed in fur-trimmed pioneer uniforms and a bagpipe group of d Highlanders, two caliopes and a fife and drum corps from troit. For the first time in many years, horses in great rs were scattered thru the parade—elegant beauties that have come right out of Hollywood. There were two covered s, one accompanied by very professional-looking cowboys who t have been with Wagon Train waiting to go West.

The small circus added a elephant, a solemn, majestic asking camel indifferent to the applause, a llama and a team dappled ponies.

And the rains came. By twelve o'clock it poured. But the owd and the people in the parade all accepted it with such good e.

The Ypsilanti Historical Society was represented in the parade Rene Moran and Vawnee Gilbert, our Victorian bathing beauties. the Burgess and Roger Moran were instrumental in designing and instructing the cabana. Beauty and talent are always a winning umbination.

The sun came out in the early afternoon and so did the people. Great crowds came and spent time looking and admiring our Museum. Registrations were from 65 towns in Michigan. One registrant was from Sweden, one from West Germany, England and also New South Wales, Australia. Texas, Florida and cities such as Toleda, Chicago, and Philadelphia were noted in the guest book. Visitors left more than &dollar;200 in contributions and they bought more than &dollar;200 from our show case with Eileen Harrison's exquisite dolls the most popular item.

The Antique Show sponsored and promoted by the Ypsilanti Historical Society was an unqualified success. Twenty-four dealers did very well and enjoyed the hospitality corner with coffee and TLC. Planing for the show began in February by the following committee: Eill Edmunds, LaVern Howard, Linda Hohlbrook, Miller, Mike Miller, Elnora Miller, Grace and Herb Cornish and McCarthy. It was a well organised effort. Congratulations thanks to each of them. Ethel O'Connor was assisted by Marge been volunteers every day.

The National Bank and the Ypsilanti Savings Bank borrowed nsively from the Museum Archives to add to their exhibits.

Doris Milliman, our distinguished Historical Society member, on the General Heritage Festival Committee. When it was all Doris said she had served on many and various committees at never on one like this one. All members were so devoted and lented, making it an Ypsilanti event to be long remembered. And in, perhaps the greatest praise must be given to Nathalie ds, Chairman of the Committee. Donna Carpenter was Parade hairman and gave Ypsilanti the greatest parade it has ever had and Ypsilanti is famous throughout, the State and thru more than Century for its Parades.

There are many Society members names we have omitted and we them to pardon the oversight.