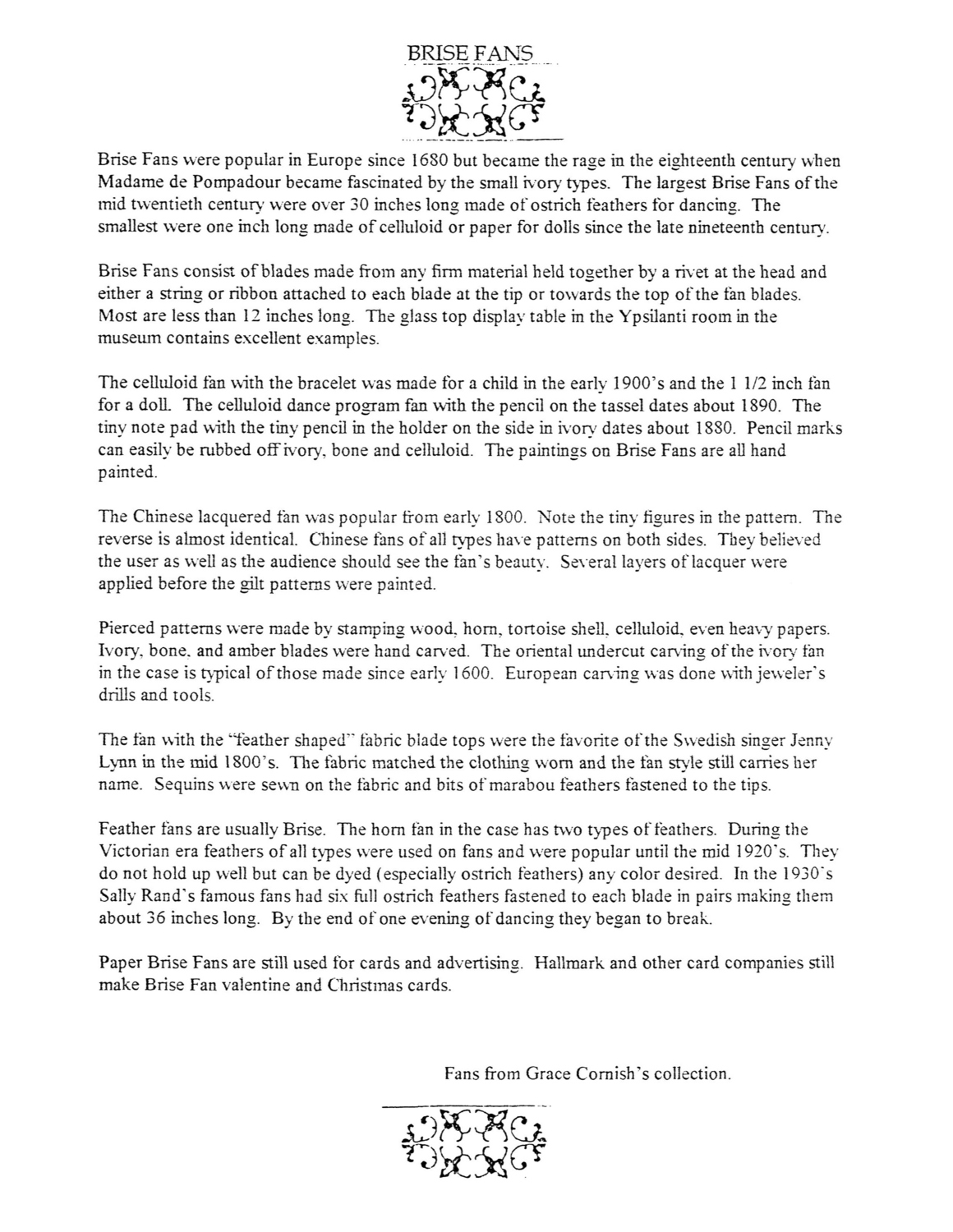 Brise Fans were popular in Europe since 1680 but became the rage in the eighteenth century when Madame de Pompadour became fascinated by the small ivory types. The largest Brise Fans of the mid twentieth century were over 30 inches long made of ostrich feathers for dancing. The smallest were one inch long made of celluloid or paper for dolls since the late nineteenth century.

Brise Fans consist of blades made from any firm material held together by a rivet at the head and either a string or ribbon attached to each blade at the tip or towards the top of the fan blades. Most are less than 12 inches long. The glass top display table in the Ypsilanti room in the museum contains excellent examples.

The celluloid fan with the bracelet was made for a child in the early 1900's and the 1 1/2 inch fan for a doll. The celluloid dance program fan with the pencil on the tassel dates about 1890. The tiny note pad with the tiny pencil in the holder on the side in ivory dates about 1880. Pencil marks can easily be rubbed off ivory, bone and celluloid. The paintings on Brise Fans are all hand painted.

The Chinese lacquered fan was popular from early 1800. Note the tiny figures in the pattern. The reverse is almost identical. Chinese fans of all types have patterns on both sides. They believed the user as well as the audience should see the fan's beauty. Several layers of lacquer were applied before the gilt patterns were painted.

Pierced patterns were made by stamping wood, hom, tortoise shell, celluloid, even heavy papers. Ivory, bone, and amber blades were hand carved. The oriental undercut carving of the ivory fan in the case is typical of those made since early 1600. European carving was done with jeweler's drills and tools.

The fan with the “feather shaped” fabric blade tops were the favorite of the Swedish singer Jenny Lynn in the mid 1800's. The fabric matched the clothing worn and the fan style still carries her name. Sequins were sewn on the fabric and bits of marabou feathers fastened to the tips.

Feather fans are usually Brise. The horn fan in the case has two types of feathers. During the Victorian era feathers of all types were used on fans and were popular until the mid 1920's. They do not hold up well but can be dyed (especially ostrich feathers) any color desired. In the 1930's Sally Rand's famous fans had six full ostrich feathers fastened to each blade in pairs making them about 36 inches long. By the end of one evening of dancing they began to break.