Climbing the Camperdown Elm as Children 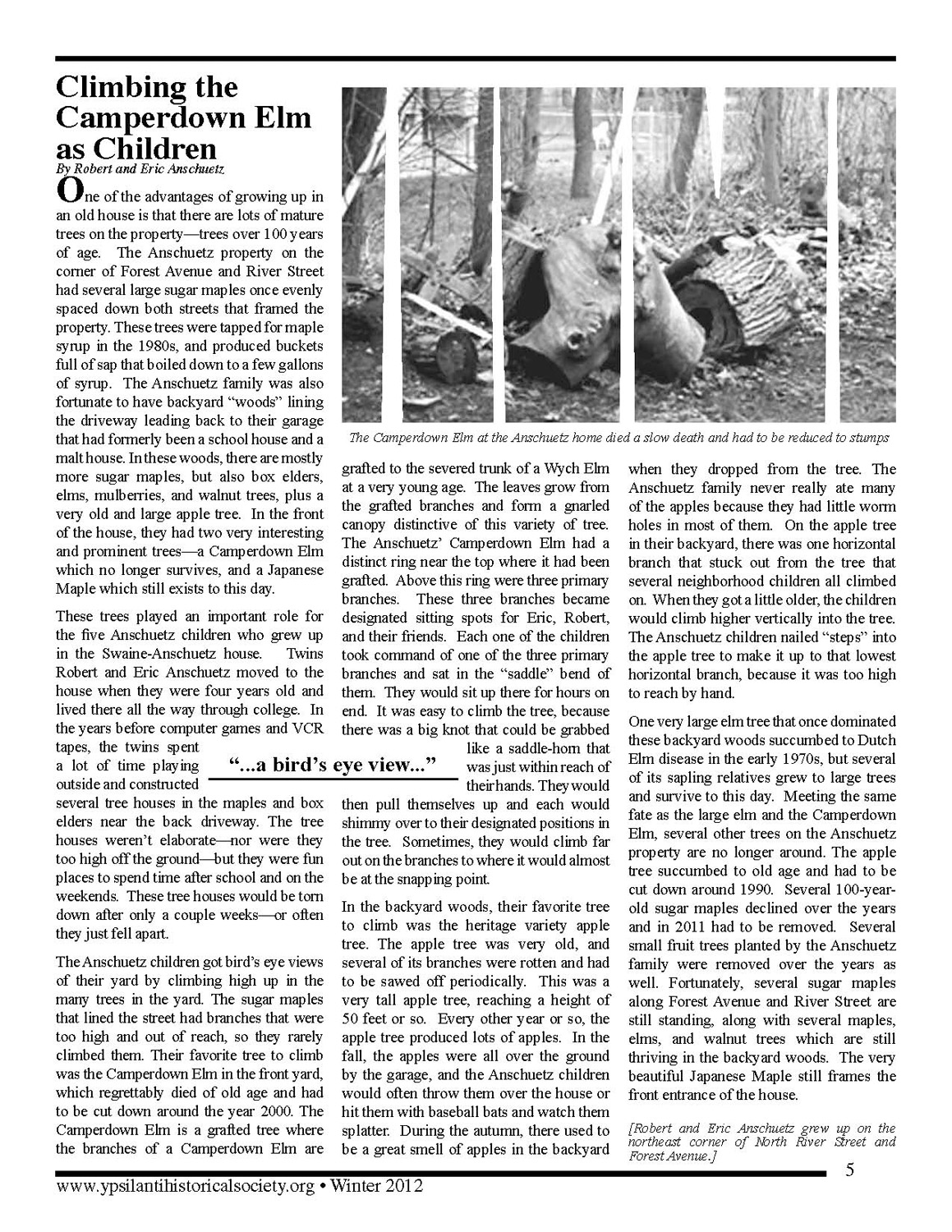 One of the advantages of growing up in an old house is that there are lots of mature trees on the property––trees over 100 years of age. The Anschuetz property on the corner of Forest Avenue and River Street had several large sugar maples once evenly spaced down both streets that framed the property. These trees were tapped for maple syrup in the 1980s, and produced buckets full of sap that boiled down to a few gallons of syrup. The Anschuetz family was also fortunate to have backyard “woods” lining the driveway leading back to their garage that had formerly been a school house and a malt house. In these woods, there are mostly more sugar maples, but also box elders, elms, mulberries, and walnut trees, plus a very old and large apple tree. In the front of the house, they had two very interesting and prominent trees––a Camperdown Elm which no longer survives, and a Japanese Maple which still exists to this day. These trees played an important role for the five Anschuetz children who grew up in the Swaine-Anschuetz house. Twins Robert and Eric Anschuetz moved to the house when they were four years old and lived there all the way through college. In the years before computer games and VCR tapes, the twins spent a lot of time playing outside and constructed several tree houses in the maples and box elders near the back driveway. The tree houses weren’t elaborate––nor were they too high off the ground––but they were fun places to spend time after school and on the weekends. These tree houses would be torn down after only a couple weeks––or often they just fell apart. The Anschuetz children got bird’s eye views of their yard by climbing high up in the many trees in the yard. The sugar maples that lined the street had branches that were too high and out of reach, so they rarely climbed them. Their favorite tree to climb was the Camperdown Elm in the front yard, which regrettably died of old age and had to be cut down around the year 2000. The Camperdown Elm is a grafted tree where the branches of a Camperdown Elm are grafted to the severed trunk of a Wych Elm at a very young age. The leaves grow from the grafted branches and form a gnarled canopy distinctive of this variety of tree. The Anschuetz’ Camperdown Elm had a distinct ring near the top where it had been grafted. Above this ring were three primary branches. These three branches became designated sitting spots for Eric, Robert, and their friends. Each one of the children took command of one of the three primary branches and sat in the “saddle” bend of them. They would sit up there for hours on end. It was easy to climb the tree, because there was a big knot that could be grabbed like a saddle-horn that was just within reach of their hands. They would then pull themselves up and each would shimmy over to their designated positions in the tree. Sometimes, they would climb far out on the branches to where it would almost be at the snapping point. In the backyard woods, their favorite tree to climb was the heritage variety apple tree. The apple tree was very old, and several of its branches were rotten and had to be sawed off periodically. This was a very tall apple tree, reaching a height of 50 feet or so. Every other year or so, the apple tree produced lots of apples. In the fall, the apples were all over the ground by the garage, and the Anschuetz children would often throw them over the house or hit them with baseball bats and watch them splatter. During the autumn, there used to be a great smell of apples in the backyard when they dropped from the tree. The Anschuetz family never really ate many of the apples because they had little worm holes in most of them. On the apple tree in their backyard, there was one horizontal branch that stuck out from the tree that several neighborhood children all climbed on. When they got a little older, the children would climb higher vertically into the tree. The Anschuetz children nailed “steps” into the apple tree to make it up to that lowest horizontal branch, because it was too high to reach by hand. One very large elm tree that once dominated these backyard woods succumbed to Dutch Elm disease in the early 1970s, but several of its sapling relatives grew to large trees and survive to this day. Meeting the same fate as the large elm and the Camperdown Elm, several other trees on the Anschuetz property are no longer around. The apple tree succumbed to old age and had to be cut down around 1990. Several 100-year-old sugar maples declined over the years and in 2011 had to be removed. Several small fruit trees planted by the Anschuetz family were removed over the years as well. Fortunately, several sugar maples along Forest Avenue and River Street are still standing, along with several maples, elms, and walnut trees which are still thriving in the backyard woods. The very beautiful Japanese Maple still frames the front entrance of the house. [Robert and Eric Anschuetz grew up on the northeast corner of North River Street and Forest Avenue.]

1. The Camperdown Elm at the Anschuetz home died a slow death and had to be reduced to stumps