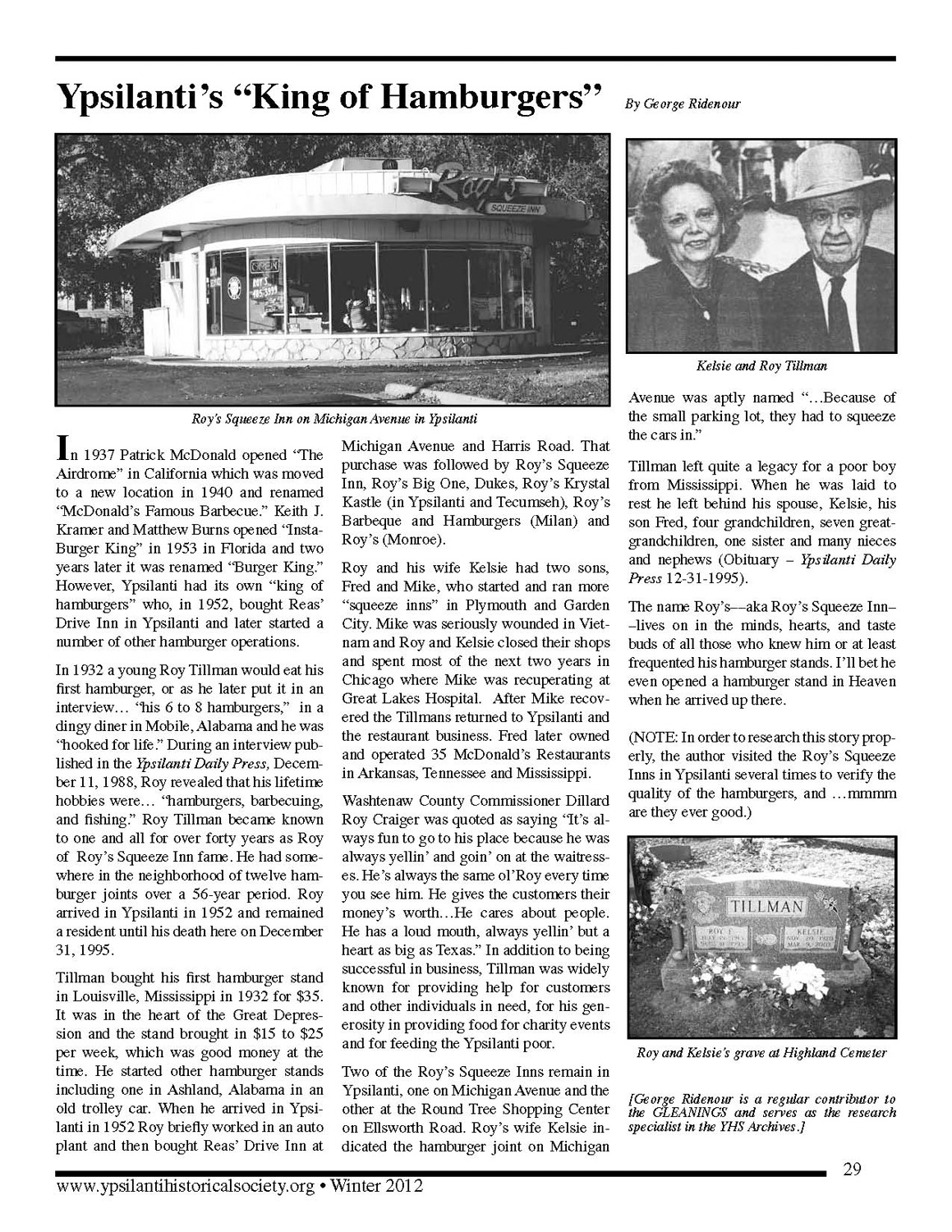 In 1937 Patrick McDonald opened “The Airdrome” in California which was moved to a new location in 1940 and renamed “McDonald’s Famous Barbecue.” Keith J. Kramer and Matthew Burns opened “Insta-Burger King” in 1953 in Florida and two years later it was renamed “Burger King.” However, Ypsilanti had its own “king of hamburgers” who, in 1952, bought Reas’ Drive Inn in Ypsilanti and later started a number of other hamburger operations. In 1932 a young Roy Tillman would eat his first hamburger, or as he later put it in an interview… “his 6 to 8 hamburgers,” in a dingy diner in Mobile, Alabama and he was “hooked for life.” During an interview published in the Ypsilanti Daily Press, December 11, 1988, Roy revealed that his lifetime hobbies were… “hamburgers, barbecuing, and fishing.” Roy Tillman became known to one and all for over forty years as Roy of Roy’s Squeeze Inn fame. He had somewhere in the neighborhood of twelve hamburger joints over a 56-year period. Roy arrived in Ypsilanti in 1952 and remained a resident until his death here on December 31, 1995. Tillman bought his first hamburger stand in Louisville, Mississippi in 1932 for $35. It was in the heart of the Great Depression and the stand brought in $15 to $25 per week, which was good money at the time. He started other hamburger stands including one in Ashland, Alabama in an old trolley car. When he arrived in Ypsilanti in 1952 Roy briefly worked in an auto plant and then bought Reas’ Drive Inn at Michigan Avenue and Harris Road. That purchase was followed by Roy’s Squeeze Inn, Roy’s Big One, Dukes, Roy’s Krystal Kastle (in Ypsilanti and Tecumseh), Roy’s Barbeque and Hamburgers (Milan) and Roy’s (Monroe). Roy and his wife Kelsie had two sons, Fred and Mike, who started and ran more “squeeze inns” in Plymouth and Garden City. Mike was seriously wounded in Vietnam and Roy and Kelsie closed their shops and spent most of the next two years in Chicago where Mike was recuperating at Great Lakes Hospital. After Mike recovered the Tillmans returned to Ypsilanti and the restaurant business. Fred later owned and operated 35 McDonald’s Restaurants in Arkansas, Tennessee and Mississippi. Washtenaw County Commissioner Dillard Roy Craiger was quoted as saying “It’s always fun to go to his place because he was always yellin’ and goin’ on at the waitresses. He’s always the same ol’Roy every time you see him. He gives the customers their money’s worth…He cares about people. He has a loud mouth, always yellin’ but a heart as big as Texas.” In addition to being successful in business, Tillman was widely known for providing help for customers and other individuals in need, for his generosity in providing food for charity events and for feeding the Ypsilanti poor. Two of the Roy’s Squeeze Inns remain in Ypsilanti, one on Michigan Avenue and the other at the Round Tree Shopping Center on Ellsworth Road. Roy’s wife Kelsie indicated the hamburger joint on Michigan Avenue was aptly named “…Because of the small parking lot, they had to squeeze the cars in.” Tillman left quite a legacy for a poor boy from Mississippi. When he was laid to rest he left behind his spouse, Kelsie, his son Fred, four grandchildren, seven great-grandchildren, one sister and many nieces and nephews (Obituary – Ypsilanti Daily Press 12-31-1995). The name Roy’s––aka Roy’s Squeeze Inn––lives on in the minds, hearts, and taste buds of all those who knew him or at least frequented his hamburger stands. I’ll bet he even opened a hamburger stand in Heaven when he arrived up there. (NOTE: In order to research this story properly, the author visited the Roy’s Squeeze Inns in Ypsilanti several times to verify the quality of the hamburgers, and …mmmm are they ever good.) [George Ridenour is a regular contributor to the GLEANINGS and serves as the research specialist in the YHS Archives.]