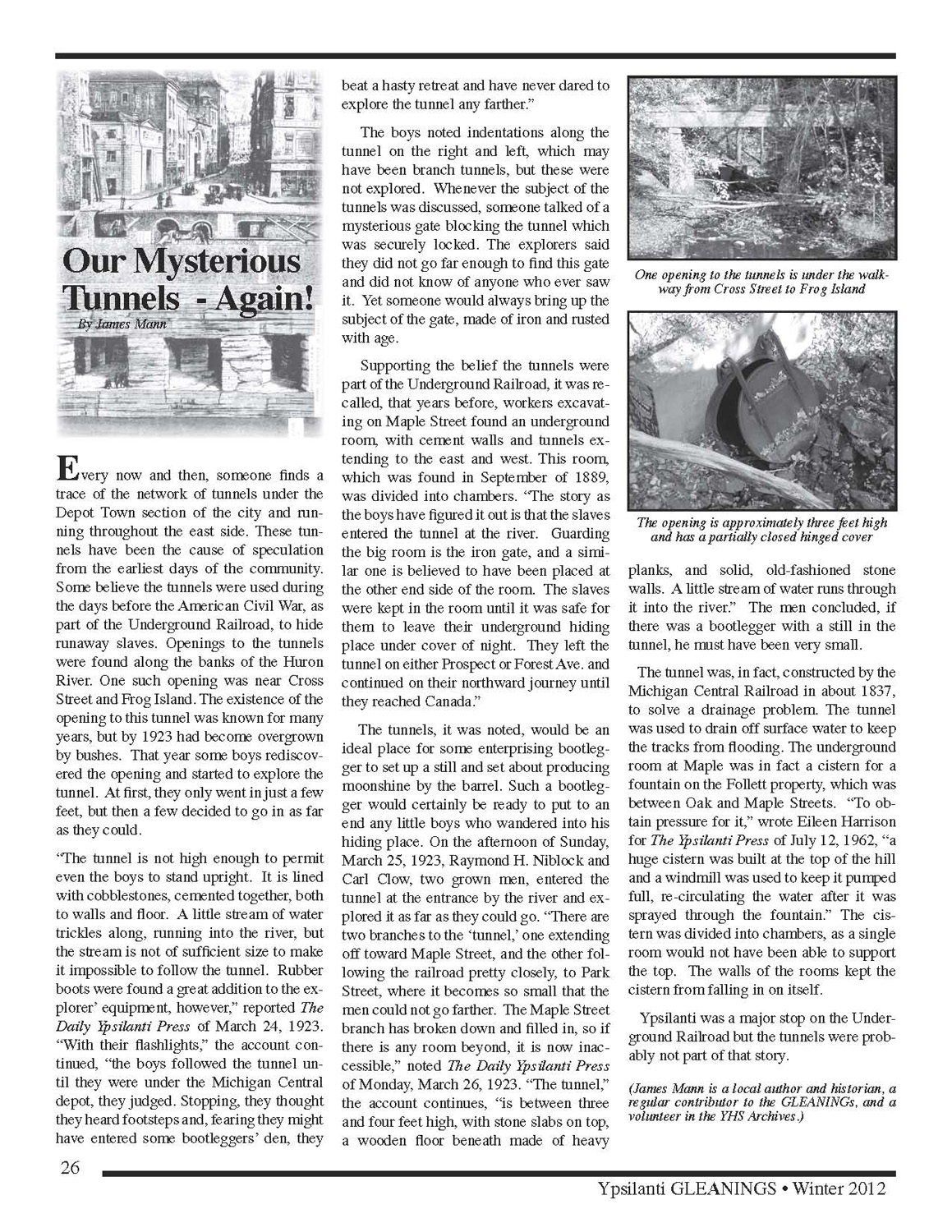 Every now and then, someone finds a trace of the network of tunnels under the Depot Town section of the city and running throughout the east side. These tunnels have been the cause of speculation from the earliest days of the community. Some believe the tunnels were used during the days before the American Civil War, as part of the Underground Railroad, to hide runaway slaves. Openings to the tunnels were found along the banks of the Huron River. One such opening was near Cross Street and Frog Island. The existence of the opening to this tunnel was known for many years, but by 1923 had become overgrown by bushes. That year some boys rediscovered the opening and started to explore the tunnel. At first, they only went in just a few feet, but then a few decided to go in as far as they could. “The tunnel is not high enough to permit even the boys to stand upright. It is lined with cobblestones, cemented together, both to walls and floor. A little stream of water trickles along, running into the river, but the stream is not of sufficient size to make it impossible to follow the tunnel. Rubber boots were found a great addition to the explorer’ equipment, however,” reported The Daily Ypsilanti Press of March 24, 1923. “With their flashlights,” the account continued, “the boys followed the tunnel until they were under the Michigan Central depot, they judged. Stopping, they thought they heard footsteps and, fearing they might have entered some bootleggers’ den, they beat a hasty retreat and have never dared to explore the tunnel any farther.” The boys noted indentations along the tunnel on the right and left, which may have been branch tunnels, but these were not explored. Whenever the subject of the tunnels was discussed, someone talked of a mysterious gate blocking the tunnel which was securely locked. The explorers said they did not go far enough to find this gate and did not know of anyone who ever saw it. Yet someone would always bring up the subject of the gate, made of iron and rusted with age. Supporting the belief the tunnels were part of the Underground Railroad, it was recalled, that years before, workers excavating on Maple Street found an underground room, with cement walls and tunnels extending to the east and west. This room, which was found in September of 1889, was divided into chambers. “The story as the boys have figured it out is that the slaves entered the tunnel at the river. Guarding the big room is the iron gate, and a similar one is believed to have been placed at the other end side of the room. The slaves were kept in the room until it was safe for them to leave their underground hiding place under cover of night. They left the tunnel on either Prospect or Forest Ave. and continued on their northward journey until they reached Canada.” The tunnels, it was noted, would be an ideal place for some enterprising bootlegger to set up a still and set about producing moonshine by the barrel. Such a bootlegger would certainly be ready to put to an end any little boys who wandered into his hiding place. On the afternoon of Sunday, March 25, 1923, Raymond H. Niblock and Carl Clow, two grown men, entered the tunnel at the entrance by the river and explored it as far as they could go. “There are two branches to the ‘tunnel,’ one extending off toward Maple Street, and the other following the railroad pretty closely, to Park Street, where it becomes so small that the men could not go farther. The Maple Street branch has broken down and filled in, so if there is any room beyond, it is now inaccessible,” noted The Daily Ypsilanti Press of Monday, March 26, 1923. “The tunnel,” the account continues, “is between three and four feet high, with stone slabs on top, a wooden floor beneath made of heavy planks, and solid, old-fashioned stone walls. A little stream of water runs through it into the river.” The men concluded, if there was a bootlegger with a still in the tunnel, he must have been very small. The tunnel was, in fact, constructed by the Michigan Central Railroad in about 1837, to solve a drainage problem. The tunnel was used to drain off surface water to keep the tracks from flooding. The underground room at Maple was in fact a cistern for a fountain on the Follett property, which was between Oak and Maple Streets. “To obtain pressure for it,” wrote Eileen Harrison for The Ypsilanti Press of July 12, 1962, “a huge cistern was built at the top of the hill and a windmill was used to keep it pumped full, re-circulating the water after it was sprayed through the fountain.” The cistern was divided into chambers, as a single room would not have been able to support the top. The walls of the rooms kept the cistern from falling in on itself. Ypsilanti was a major stop on the Underground Railroad but the tunnels were probably not part of that story. (James Mann is a local author and historian, a regular contributor to the GLEANINGs, and a volunteer in the YHS Archives.)

Photo Captions:
1. One opening to the tunnels is under the walkway from Cross Street to Frog Island

2. The opening is approximately three feet high and has a partially closed hinged cover