Legend of the Smeet Frog 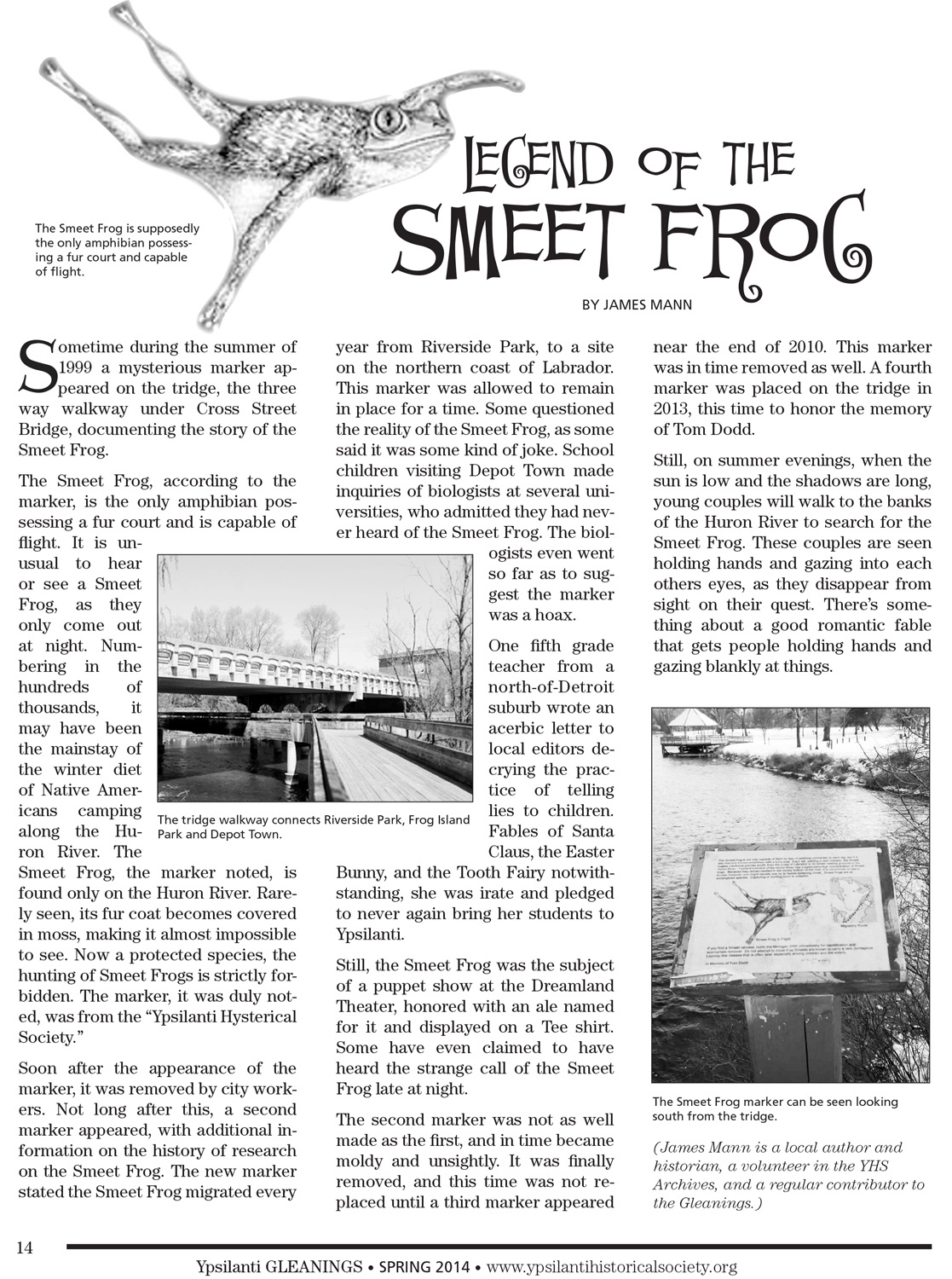 Sometime during the summer of 1999 a mysterious marker appeared on the tridge, the three way walkway under Cross Street Bridge, documenting the story of the Smeet Frog. The Smeet Frog, according to the marker, is the only amphibian possessing a fur court and is capable of flight. It is unusual to hear or see a Smeet Frog, as they only come out at night. Numbering in the hundreds of thousands, it may have been the mainstay of the winter diet of Native Americans camping along the Huron River. The Smeet Frog, the marker noted, is found only on the Huron River. Rarely seen, its fur coat becomes covered in moss, making it almost impossible to see. Now a protected species, the hunting of Smeet Frogs is strictly forbidden. The marker, it was duly noted, was from the “Ypsilanti Hysterical Society.” Soon after the appearance of the marker, it was removed by city workers. Not long after this, a second marker appeared, with additional information on the history of research on the Smeet Frog. The new marker stated the Smeet Frog migrated every year from Riverside Park, to a site on the northern coast of Labrador. This marker was allowed to remain in place for a time. Some questioned the reality of the Smeet Frog, as some said it was some kind of joke. School children visiting Depot Town made inquiries of biologists at several universities, who admitted they had never heard of the Smeet Frog. The biologists even went so far as to suggest the marker was a hoax. One fifth grade teacher from a north-of-Detroit suburb wrote an acerbic letter to local editors decrying the practice of telling lies to children. Fables of Santa Claus, the Easter Bunny, and the Tooth Fairy notwithstanding, she was irate and pledged to never again bring her students to Ypsilanti. Still, the Smeet Frog was the subject of a puppet show at the Dreamland Theater, honored with an ale named for it and displayed on a Tee shirt. Some have even claimed to have heard the strange call of the Smeet Frog late at night. The second marker was not as well made as the first, and in time became moldy and unsightly. It was finally removed, and this time was not replaced until a third marker appeared near the end of 2010. This marker was in time removed as well. A fourth marker was placed on the tridge in 2013, this time to honor the memory of Tom Dodd. Still, on summer evenings, when the sun is low and the shadows are long, young couples will walk to the banks of the Huron River to search for the Smeet Frog. These couples are seen holding hands and gazing into each others eyes, as they disappear from sight on their quest. There’s something about a good romantic fable that gets people holding hands and gazing blankly at things. (James Mann is a local author and historian, a volunteer in the YHS Archives, and a regular contributor to the Gleanings.)

Photo 2: The Smeet Frog is supposedly the only amphibian possessing a fur court and capable of flight.

Photo 3: The Smeet Frog marker can be seen looking south from the tridge.