In Search of the Real Rosie the Riveter 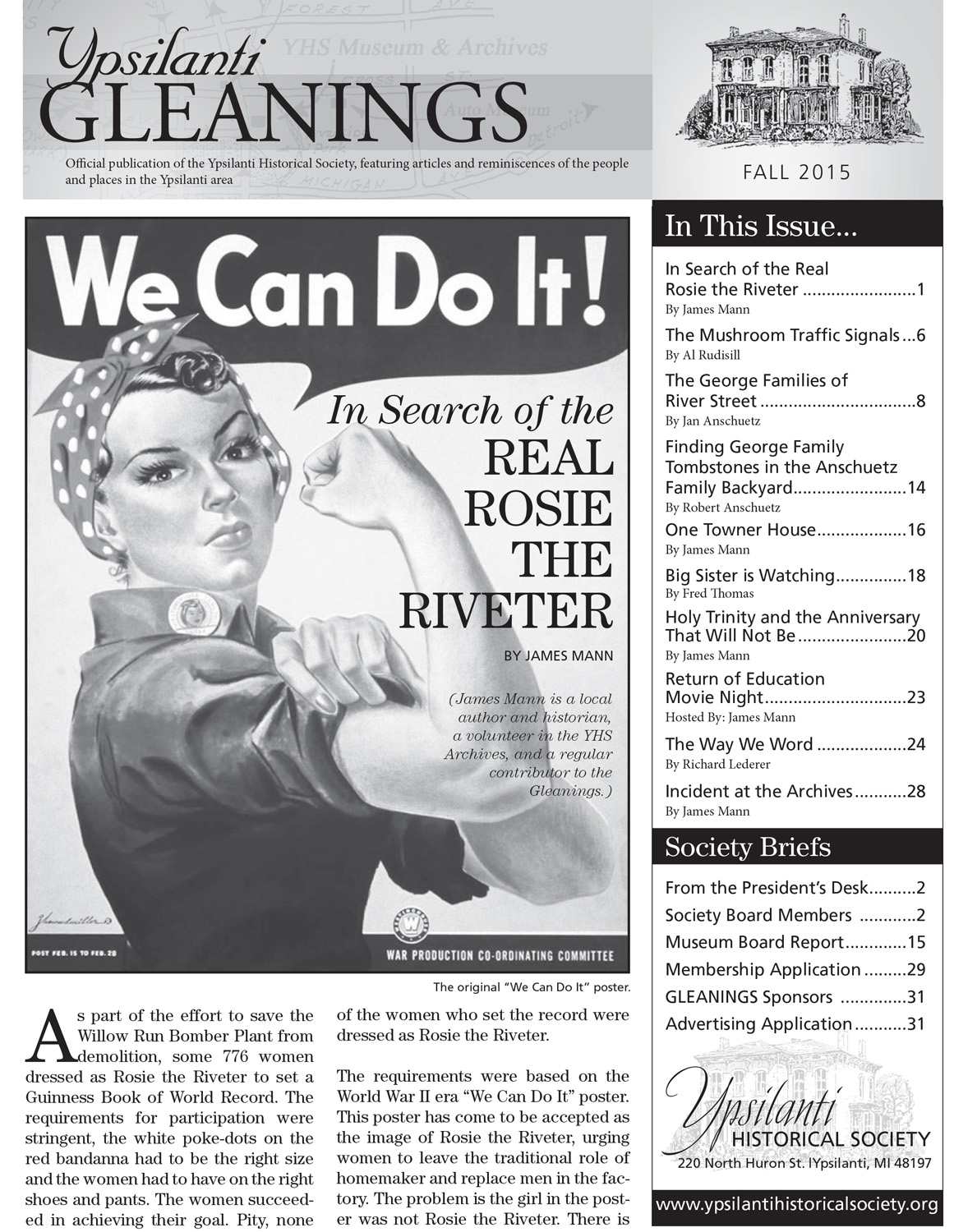 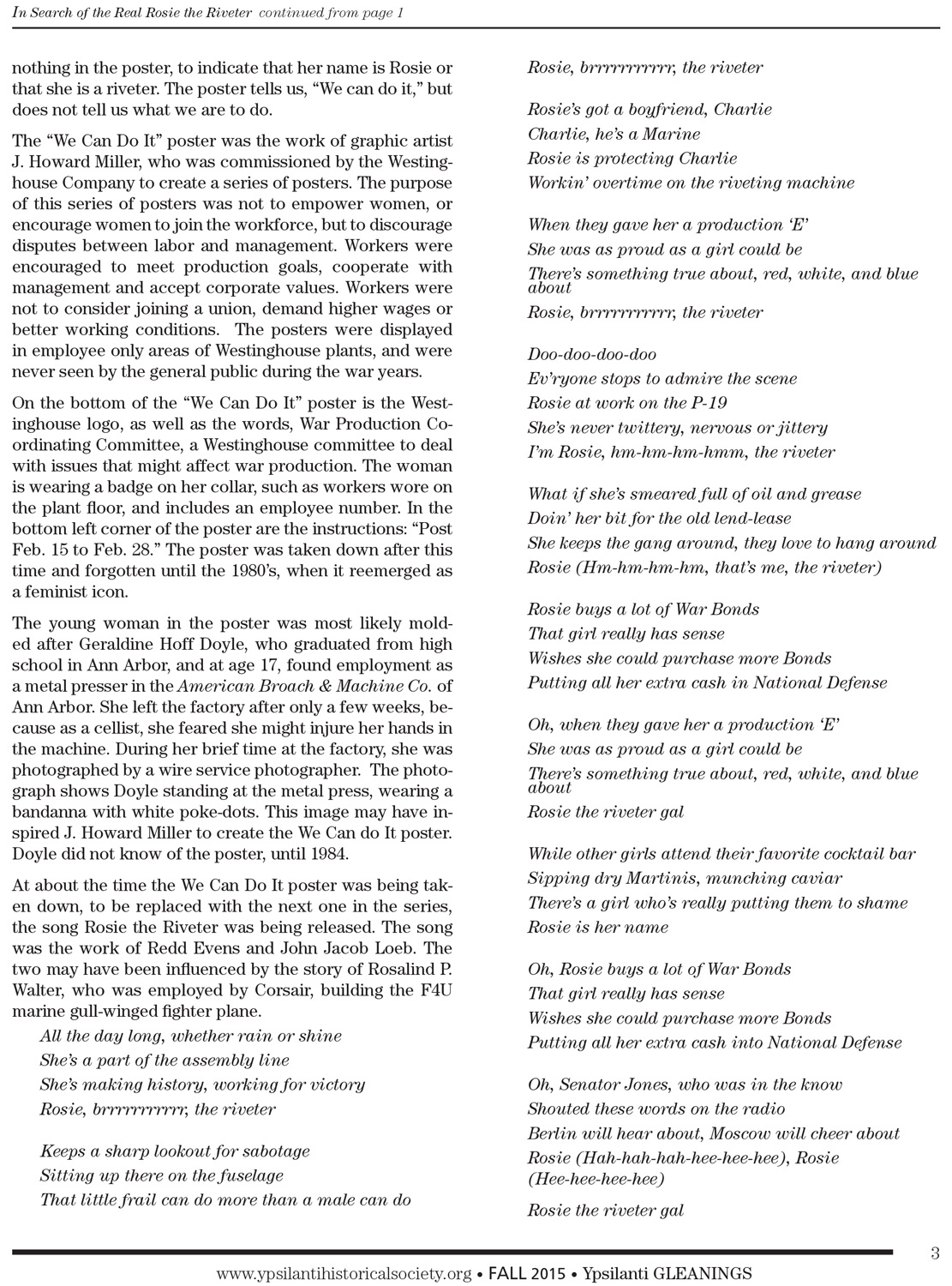 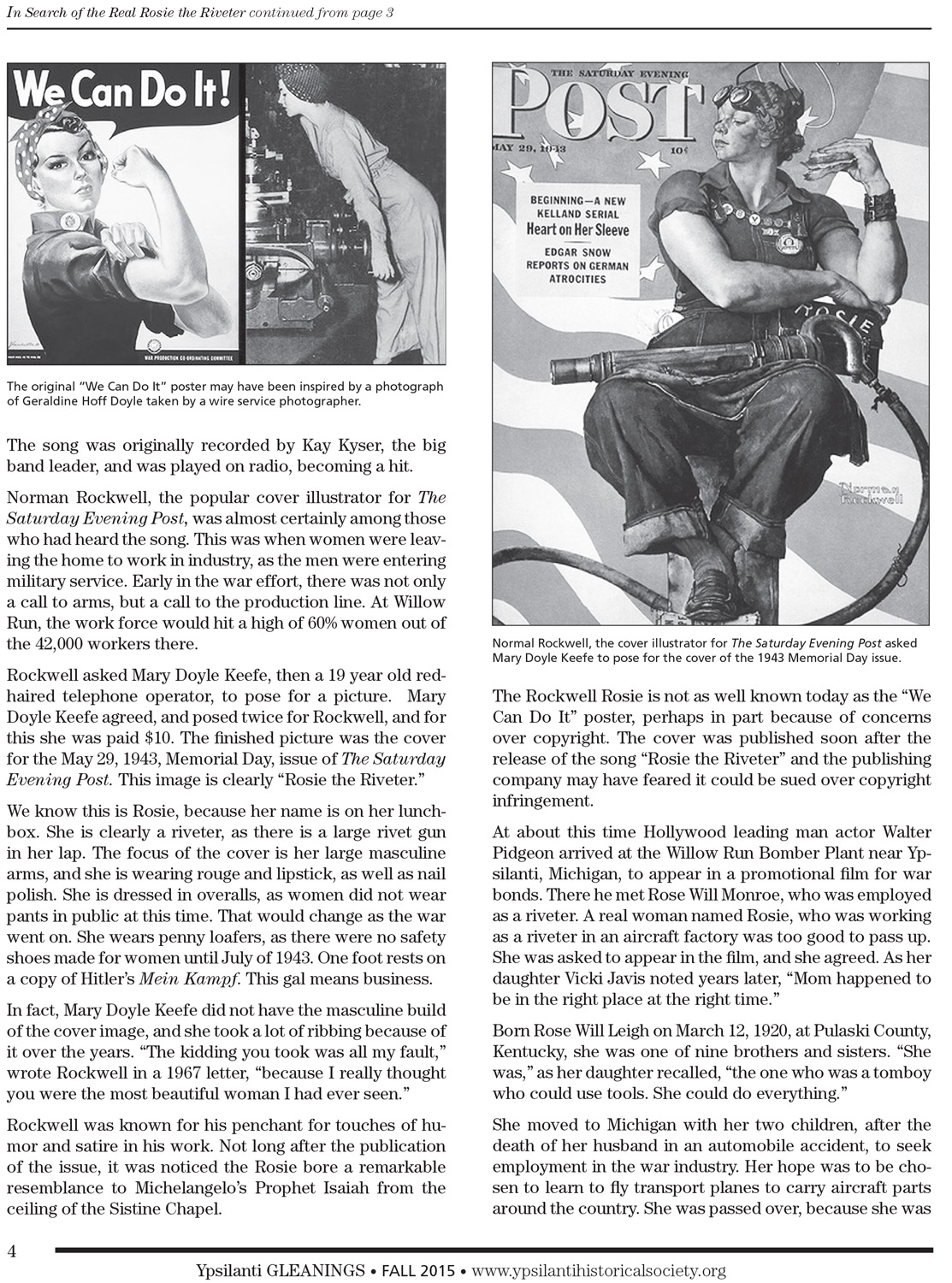 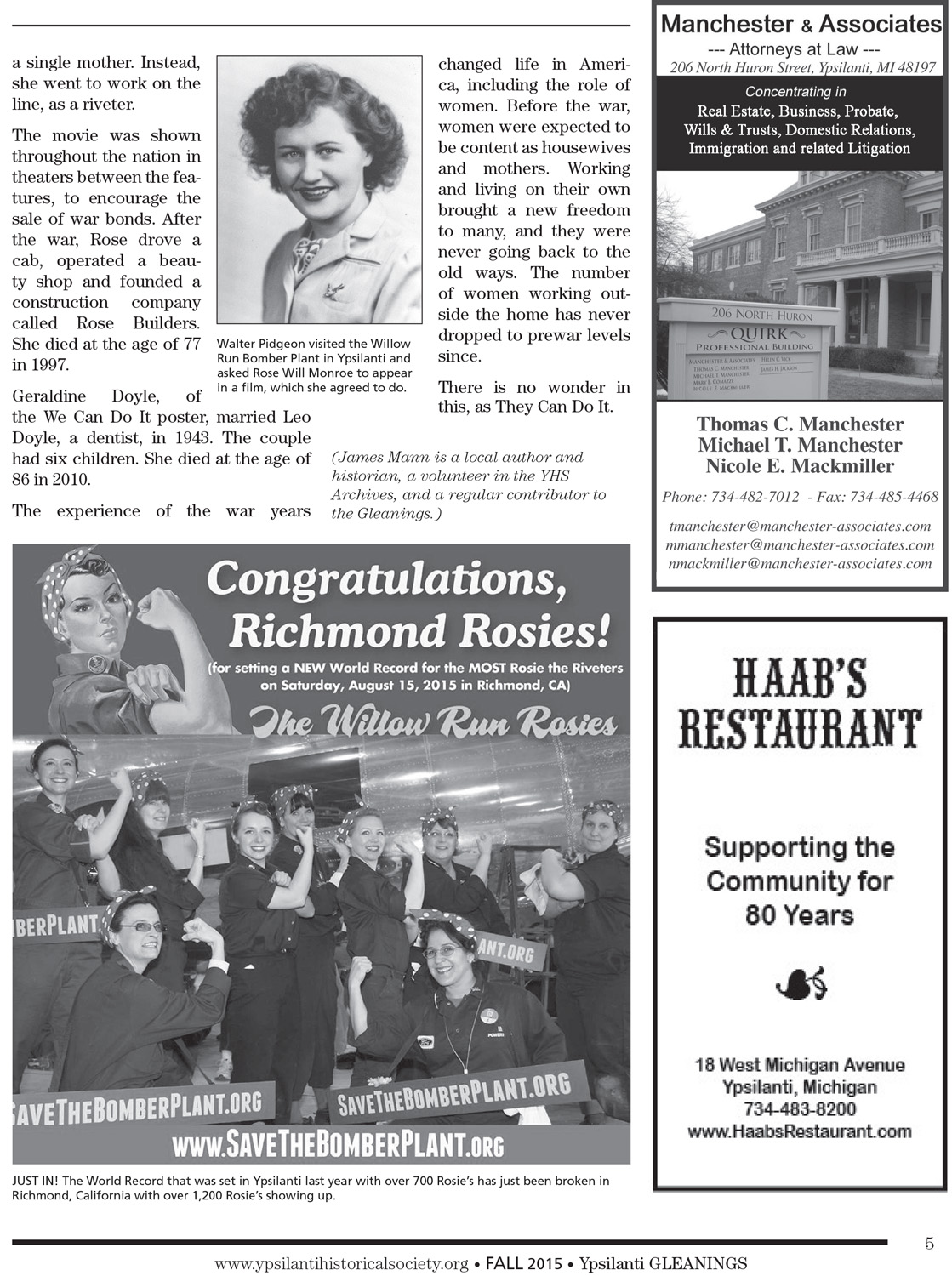 As part of the effort to save the Willow Run Bomber Plant from demolition, some 776 women dressed as Rosie the Riveter to set a Guinness Book of World Record. The requirements for participation were stringent, the white poke-dots on the red bandanna had to be the right size and the women had to have on the right shoes and pants. The women succeeded in achieving their goal. Pity, none of the women who set the record were dressed as Rosie the Riveter.

The requirements were based on the World War II era “We Can Do It” poster. This poster has come to be accepted as the image of Rosie the Riveter, urging women to leave the traditional role of homemaker and replace men in the factory. The problem is the girl in the poster was not Rosie the Riveter. There is nothing in the poster, to indicate that her name is Rosie or that she is a riveter. The poster tells us, “We can do it,” but does not tell us what we are to do.

The “We Can Do It” poster was the work of graphic artist J. Howard Miller, who was commissioned by the Westinghouse Company to create a series of posters. The purpose of this series of posters was not to empower women, or encourage women to join the workforce, but to discourage disputes between labor and management. Workers were encouraged to meet production goals, cooperate with management and accept corporate values. Workers were not to consider joining a union, demand higher wages or better working conditions. The posters were displayed in employee only areas of Westinghouse plants, and were never seen by the general public during the war years.

On the bottom of the “We Can Do It” poster is the Westinghouse logo, as well as the words, War Production Coordinating Committee, a Westinghouse committee to deal with issues that might affect war production. The woman is wearing a badge on her collar, such as workers wore on the plant floor, and includes an employee number. In the bottom left corner of the poster are the instructions: “Post Feb. 15 to Feb. 28.” The poster was taken down after this time and forgotten until the 1980's, when it reemerged as a feminist icon.

The young woman in the poster was most likely molded after Geraldine Hoff Doyle, who graduated from high school in Ann Arbor, and at age 17, found employment as a metal presser in the American Broach & Machine Co. of Ann Arbor. She left the factory after only a few weeks, because as a cellist, she feared she might injure her hands in the machine. During her brief time at the factory, she was photographed by a wire service photographer. The photograph shows Doyle standing at the metal press, wearing a bandanna with white poke-dots. This image may have inspired J. Howard Miller to create the We Can do It poster. Doyle did not know of the poster, until 1984.

At about the time the We Can Do It poster was being taken down, to be replaced with the next one in the series, the song Rosie the Riveter was being released. The song was the work of Redd Evens and John Jacob Loeb. The two may have been influenced by the story of Rosalind P. Walter, who was employed by Corsair, building the F4U marine gull-winged fighter plane.

All the day long, whether rain or shine
She's a part of the assembly line
She's making history, working for victory
Rosie, brrrrrrrrrrr, the riveter

Keeps a sharp lookout for sabotage
Sitting up there on the fuselage
That little frail can do more than a male can do
Rosie, brrrrrrrrrrr, the riveter

Rosie's got a boyfriend, Charlie
Charlie, he's a Marine
Rosie is protecting Charlie
Workin' overtime on the riveting machine

When they gave her a production 'E'
She was as proud as a girl could be
There's something true about, red, white, and blue about
Rosie, brrrrrrrrrrr, the riveter

What if she's smeared full of oil and grease
Doin' her bit for the old lend-lease
She keeps the gang around, they love to hang around
Rosie (Hm-hm-hm-hm, that's me, the riveter)

Oh, when they gave her a production 'E'
She was as proud as a girl could be
There's something true about, red, white, and blue about
Rosie the riveter gal

While other girls attend their favorite cocktail bar
Sipping dry Martinis, munching caviar
There's a girl who's really putting them to shame
Rosie is her name

Oh, Rosie buys a lot of War Bonds
That girl really has sense
Wishes she could purchase more Bonds
Putting all her extra cash into National Defense

Oh, Senator Jones, who was in the know
Shouted these words on the radio
Berlin will hear about, Moscow will cheer about
Rosie (Hah-hah-hah-hee-hee-hee), Rosie (Hee-hee-hee-hee)
Rosie the riveter gal

The song was originally recorded by Kay Kyser, the big band leader, and was played on radio, becoming a hit.

Norman Rockwell, the popular cover illustrator for The Saturday Evening Post, was almost certainly among those who had heard the song. This was when women were leaving the home to work in industry, as the men were entering military service. Early in the war effort, there was not only a call to arms, but a call to the production line. At Willow Run, the work force would hit a high of 60% women out of the 42,000 workers there.

Rockwell asked Mary Doyle Keefe, then a 19 year old red-haired telephone operator, to pose for a picture. Mary Doyle Keefe agreed, and posed twice for Rockwell, and for this she was paid $10. The finished picture was the cover for the May 29, 1943, Memorial Day, issue of The Saturday Evening Post. This image is clearly “Rosie the Riveter.”

We know this is Rosie, because her name is on her lunchbox. She is clearly a riveter, as there is a large rivet gun in her lap. The focus of the cover is her large masculine arms, and she is wearing rouge and lipstick, as well as nail polish. She is dressed in overalls, as women did not wear pants in public at this time. That would change as the war went on. She wears penny loafers, as there were no safety shoes made for women until July of 1943. One foot rests on a copy of Hitler's Mein Kampf. This gal means business.

In fact, Mary Doyle Keefe did not have the masculine build of the cover image, and she took a lot of ribbing because of it over the years. “The kidding you took was all my fault,” wrote Rockwell in a 1967 letter, “because I really thought you were the most beautiful woman I had ever seen.”

Rockwell was known for his penchant for touches of humor and satire in his work. Not long after the publication of the issue, it was noticed the Rosie bore a remarkable resemblance to Michelangelo's Prophet Isaiah from the ceiling of the Sistine Chapel.

The Rockwell Rosie is not as well known today as the “We Can Do It” poster, perhaps in part because of concerns over copyright. The cover was published soon after the release of the song “Rosie the Riveter” and the publishing company may have feared it could be sued over copyright infringement.

At about this time Hollywood leading man actor Walter Pidgeon arrived at the Willow Run Bomber Plant near Ypsilanti, Michigan, to appear in a promotional film for war bonds. There he met Rose Will Monroe, who was employed as a riveter. A real woman named Rosie, who was working as a riveter in an aircraft factory was too good to pass up. She was asked to appear in the film, and she agreed. As her daughter Vicki Javis noted years later, “Mom happened to be in the right place at the right time.”

Born Rose Will Leigh on March 12, 1920, at Pulaski County, Kentucky, she was one of nine brothers and sisters. “She was,” as her daughter recalled, “the one who was a tomboy who could use tools. She could do everything.”

She moved to Michigan with her two children, after the death of her husband in an automobile accident, to seek employment in the war industry. Her hope was to be chosen to learn to fly transport planes to carry aircraft parts around the country. She was passed over, because she was a single mother. Instead, she went to work on the line, as a riveter.

The movie was shown throughout the nation in theaters between the features, to encourage the sale of war bonds. After the war, Rose drove a cab, operated a beauty shop and founded a construction company called Rose Builders. She died at the age of 77 in 1997.

The experience of the war years changed life in America, including the role of women. Before the war, women were expected to be content as housewives and mothers. Working and living on their own brought a new freedom to many, and they were never going back to the old ways. The number of women working outside the home has never dropped to prewar levels since.

There is no wonder in this, as They Can Do It.

Photo 1: The original “We Can Do It” poster.

Photo 2: The original “We Can Do It” poster may have been inspired by a photograph of Geraldine Hoff Doyle taken by a wire service photographer.

Photo 3: Normal Rockwell, the cover illustrator for The Saturday Evening Post asked Mary Doyle Keefe to pose for the cover of the 1943 Memorial Day issue.

Photo 4: Walter Pidgeon visited the Willow Run Bomber Plant in Ypsilanti and asked Rose Will Monroe to appear in a film, which she agreed to do.